Nearly a decade ago, Domino’s Pizza was known as the poor man’s Pizza Hut.

Not a patch on Papa John’s, and unable to satisfy the growing consumer desire for a ‘posher’ slice found in the likes of Pizza Express.

With an improved supply chain and a strong digital presence, its turnaround is due to a number of factors. However, a delightfully offbeat marketing strategy is certainly one of the biggest. With this is mind, here’s a run-down of some of the best (and daftest) examples.

1. The Official Food of Everything

In late 2017, Domino’s UK launched a six-part advertising campaign, positioning itself as the ‘Official Food of Everything’. It’s a rather bold claim, but as agency VCCP says, the idea highlights the fact that “Domino’s isn’t just about getting good food fast; it’s a way to bring people together, to celebrate the big and the small or just the everyday, it works for everything, officially.”

As such, the ads depict a number of recognisable and relatable every-day scenarios, such as hangover days, break-ups, and nights in. Essentially, the message is that every situation is best accompanied by a Domino’s.

Despite being a global brand, Domino’s also recognises the power of local marketing as a way to create personalised engagement with consumers. In 2018, it launched ‘Paving for Pizza’ – a campaign centred around the problem of potholes in US cities. Domino’s asked consumers to nominate their town to receive a paving grant from Domino’s, essentially so that pizza’s could arrive ‘back home safely’.

The pizza angle is rather light-hearted, of course, but the beauty of the campaign is that it also touches on an issue that is important to people who live and work in these cities. As a result, the campaign generated a good amount of publicity and conversation on social media.

According to PRWeek, it generated 35,000 organic mentions on social media in its first week. On the back of its initial success, Domino’s also expanded the campaign’s budget to accommodate all 50 states. 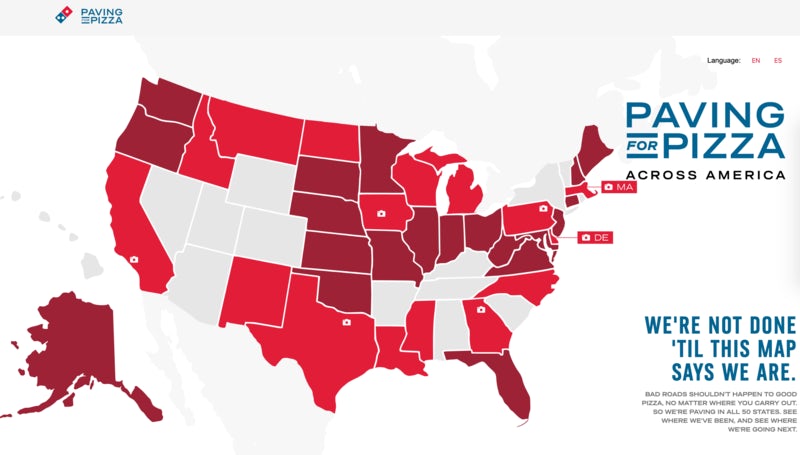 Forget silverware. What better way to celebrate the start of a marriage than with a chicken feast or a tandoori sizzler? This is the basis of a rather ingenious campaign by Domino’s, which allows soon-to-be-married couples to create their own pizza wedding registry.

It might sound like a stunt, but it’s actually a shrewd example of Domino’s ecommerce strategy. With more than half of its sales generated through digital channels, it’s yet another way for the brand to ramp up both engagement and sales online.

First date included Domino's so just makes sense to include DOMINO'S at your wedding pic.twitter.com/LGij6iYe4q

Valentine’s Day is one of the largest sales days for Dominos. However, another brand that sees a surge in interest on this day is Tinder, with a reported 20% increase in usage on 14th February.

On the back of this stat, Domino’s decided to team up with Tinder in 2018 to launch its ‘Dom Juan’ chatbot. Dom Juan appeared as a regular profile on the dating app, (though it was still obvious that it was from the brand itself). If users swiped right, Dom Juan then replied with a selection of cheesy chat-up lines to try on their real Tinder matches.

Or get on @Tinder and swipe to find me, Dom Juan, your #ValentinesDay2018 wingbot. I'm ready with the cheesiest lines for you to try on your matches. #OfficialFoodOf Tasty Chat-Up Lines. Cupid approved pic.twitter.com/PWHBNVl0qt

It was a simple but fun premise. However, the crucial and most effective element was the context of Tinder itself, which allowed Domino’s to reach its target audience on a day when they’d more likely to be active on the app. According to VCCP, the campaign drove sales yielding a 35x return on advertising spend, plus an increase of 10% from the previous year’s sales.

5. The power of emojis

One reason Domino’s has become such a popular brand (particularly with a younger demographic) is its ability to tap into current social trends.

So, recognising that emoji had become a language of its own, it decided to provide digitally-savvy consumers with the height of convenience – a service that allows you to order merely by tweeting the pizza emoji.

Now you can order Domino's by tweeting ????. Find out how at http://t.co/Rwt1tJUmXShttps://t.co/Cs5f3JJyni

Is it a gimmick or a truly valuable customer tool? That’s debatable, but it has certainly generated a fair amount of brand awareness, and perhaps furthered its reputation as a youth-focused brand.

6. Domino’s ‘Night In’ for Fashion Week

Domino’s isn’t the first name that springs to mind in the context of London Fashion Week. But naturally, that didn’t stop the pizza chain from getting in on the action this year, and teaming up with designer Liam Hodges to work on its own three-piece apparel collection.

Based on the idea of ‘JOMO’, i.e. ‘joy of missing out’ – and the growing popularity of staying in over going out – the collection includes a number of garments to keep people cosy indoors. It features ‘The Gaming Bag’, an all-in-one sleeping bag suit with arm and leg holes; ‘The Boxset Blanket’, a three-person blanket; and ‘The Controller Coat,’ a cape with pockets to hold all the essentials like a TV remote, phone and gaming controller.

The ‘Nights In’ campaign naturally generated interest on social media, boosted by a competition element, which gave users the chance to win one of the three coveted designs.

Domino’s already promises both fast delivery and innovative technology. Its Pizza Tracker tool allows customers to track their order every step of the way. However, the brand has strived to differentiate itself from its competitors with even more investment in this space – one of the most notable examples being its autonomous pizza bot. In partnership with Starship Technologies, it built a number of robots that could deliver pizzas within a one-mile radius in select German and Dutch cities. It also launched a similar initiative in Australia, where DRU (Domino’s Robotic Unit) navigated his way to customer’s homes via on-board cameras and sensors.

Unfortunately, there’s been no word as to whether Domino’s will unleash the technology on the mean streets of UK towns and cities.

8. Staying at home with Jimmy Bullard

Big sporting events are often used as marketing material, particularly for brands like Domino’s, which focuses on the social aspect of watching big events.

The 2018 World Cup was no different, as Domino’s launched its ‘Staying at home with Jimmy Bullard’ campaign – based on the fact that the ex-footballer never made the England squad, essentially making him a pro when it comes to staying at home for the big games. The campaign involved a number of films highlighting different elements of Jimmy’s time at home during the tournament, such as learning Russian and showing off his trophy cabinet. The campaign was in partnership with SportBible, who also ran the content on its own social media channels.

The tongue-in-cheek campaign showcased Domino’s sense of humour to good effect, using the widely-discussed topic of the tournament to generate reach.

From Sephora to Channel 4, a whole host of brands have integrated chatbots into their marketing strategy. Many have failed to live up to the hype, mainly due to the technology being far too limited to provide users with much more than a basic decision-tree.

With an irreverent and cheeky tone of voice, the bot sends out humorous replies, cleverly anticipating that many users are likely to try and undermine or be cheeky in return.

So, while Dom is unlikely to provide much value in the long-term, it is still decent enough to provide a bit of entertainment for loyal Domino’s customers – perhaps acting as a sign of further innovation in social ordering. In 2016, Domino’s once again tapped into digital trends, this time celebrating our fascination with Snapchat face-swapping.

Starting with social research to determine the emotions people feel when eating pizza, the resulting GIFs, snaps and emojis were then incorporated into an ad campaign, demonstrating how Domino’s leaves us ‘lost for words’.

One of the brand’s most social campaigns to date, it also included bespoke Snapchat Lenses and a dedicated Giphy channel to let us all express how we feel about stuffed crust.

Angus Quinn is content marketing manager at Skimlinks. What does he do, and what does it take to do it?

We’re about to find out…

As the year draws to a close, talk naturally turns to what the biggest trends of 2018 will be. Will AI dominate? Is personalisation yet again going to take centre stage?

Interestingly, it seems the one thing consumers will look for in the year ahead is a brand that sounds exactly like they do. In other words, emotional intelligence – i.e. the ability to empathise and engage like a human – will become the biggest consumer expectation of all.

Here’s what SME marketers need to know about Promote Mode, which is currently in public beta.