According to the WFA (World Federation of Advertisers), out-of-home ad spend was down by 49% for the first half of the year, and is 39% down on planned spend for the second half so far.

As VIOOH’s Jean-Christophe Conti suggests, however, OOH is showing positive signs of getting back on its feet for 2021 (particularly in terms of programmatic). Even throughout the lockdown, we saw high levels of creativity, with advertisers executing some on-the-nose campaigns. Here’s a look at some stand-out examples of OOH so far this year.

In September, Twitter tapped into so-called ‘caution fatigue’ for an OOH campaign, which is the apparent lack of motivation to partake in social distancing or proper mask-wearing efforts to fight the spread of the virus.

In order to remind and urge people to wear masks, Twitter turned a number of its users’ tweets about the topic into billboards, which were displayed in seven US cities including Florida, Chicago, and LA. Messages included “So…is ‘hey nice mask’ the new pick up line?” and “Why do I feel like everyone’s giving me Resting Mask Face?”

While Twitter tends to be a place for contentious and heated debate (particularly when it comes to Covid), the campaign was deliberately designed to be humorous and relatable in tone, while firmly reminding us all to do the right thing.

Paddy Power isn’t a brand you’d normally associate with doing social good, but even the betting brand got behind the ‘stay at home’ message back in March by appealing to people to “Give Our NHS Better Odds” and reduce the strain on our healthcare system.

Run by Clear Channel, the campaign was simple but effective, and even more impactful coming from a brand you perhaps wouldn’t necessarily expect.

Back in April, the OOH industry donated media space to the ‘Grateful Britain’ campaign, which amplified the nation’s gratitude to the NHS and other key workers on the frontline. Run by Mother London and initiated by Outsmart, which is the UK OOH trade body, the campaign used lighthearted and colloquial language to highlight the diverse and varied roles that have been so valuable throughout lockdown and beyond.

The fact that key workers were among the only people to see the billboards in April and May (as everyone else stayed at home) heightened the impact of the emotive message.

In Tom Fishburne’s (aka The Marketoonist) talk on day three of the Festival of Marketing 2020, he cited Emily Snacks as a good example of how to inject relatable humour into advertising. The brand cleverly adapted an outdoor advertising campaign to poke fun at the bad timing of their original planned launch. 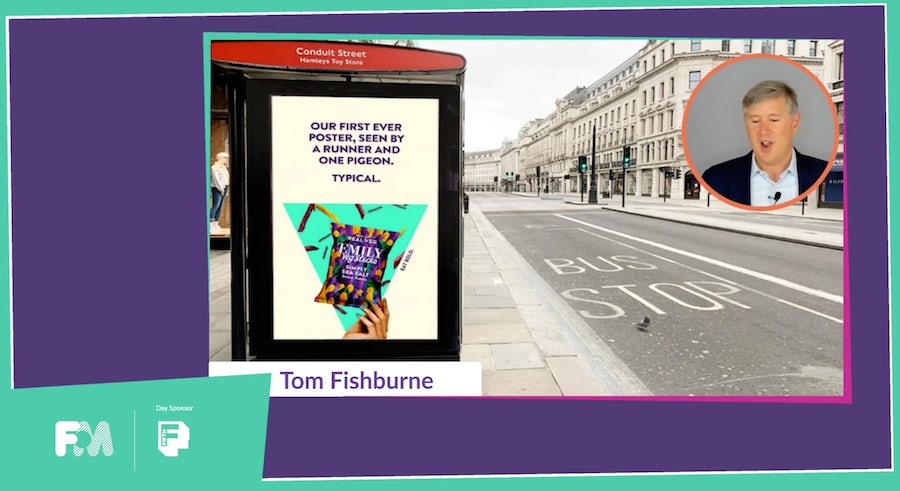 Fishburne said: “They committed to their first advertising campaign at the end of 2019, planning for an outdoor ad campaign, unfortunately not realising that it would run in the summer in the UK when everybody was sheltering. Rather than pull the ad or run completely generic advertising, they decided to have a bit of humour about the situation they were in.”

Emily’s campaign is also an example of “affiliative humour”, which as Fishburne explained, is when you find empathy in humour through a shared experience, in this case the impact of the coronavirus pandemic.

Launching a new product in 2020 was never going to be a great idea, particularly when that product was designed for social gatherings and big events like festivals. This was the predicament that HUN Wine found itself in early this year, as the brand had already committed to the launch of its new wine-in-a-can (and corresponding ad campaign).

Hey HUNs ???? If your name’s not down, you’re not coming in ????. Well, actually… if you’re name is down, you’re not coming in either. This was the day of our launch party ???? we know, we know – very sad! We had some epic plans… but as no one is allowed to come we put up these witty posters instead ????. The bright side of it not happening is we can say that it would have been the ‘best launch party of all time’ ✨- no one will be able to argue with that. #greateineinacan #wine #vegan

Instead of scrapping it entirely, however, HUN Wine mirrored the actions of Emily Snacks, pivoting to a tongue-in-cheek message about the decision to execute an outdoor ad campaign when everyone was staying at home. Fortunately, the campaign went on to generate brand awareness on social media, helping HUN Wine to gain traction just in time for the summer (when consumers could enjoy the product in parks and outdoor areas).

McDonald’s is one of those brands that doesn’t need to put its logo or name on advertising. It is just that recognisable. This is what the fast food chain did in September with its ‘Bitten Billboards’ campaign by TBWA\Paris, which looks just like it sounds… billboards with huge “bites” taken out of them.

Interestingly, McDonalds chose not to include any context or reference to Covid-19, which was perhaps a calculated decision since McDonalds Brazil separated the golden arches in its logo to represent social distancing earlier on in the year – a decision that people criticised as a misguided marketing ploy.

With UK consumers returning to shopping malls in late summer (in alignment with new Covid rules), Skoda decided to launch a DOOH campaign to promote its new range of Skoda SUVs. Crucially, the campaign – ran by Clear Channel – was touchless, which enabled consumers to interact with screens in malls simply by gesturing their hands. In doing so, they were able to explore vehicles and even book a test drive there and then.

Digital interactive screens are often used to increase interaction and engagement in OOH ads. By adding on a touchless element, Skoda was still able to reap the rewards and re-establish a connection with consumers, while still adhering to essential safety regulations.

Bumble is another brand that used relatable humour in its 2020 OOH campaign, launching billboards that cleverly referenced dating in a post-Covid world. Examples include “Add falling in love to the list of crazy things that happened in 2020” and “Look for a rebel who washes their hands.”

Love at first sight ???????????? @bumble are giving us all the feels with their latest campaign on London's iconic IMAX and premium DOOH sites across the UK (via @HavasMediaUK @TalonOOH @hiltagency)#DOOH #OOH #Advertising #ShowSomeLove pic.twitter.com/wKP28XdDYp

Using Bumble’s recognisable yellow branding, the eye-catching billboards were a great reflection of the weirdness that has occurred in 2020, and again a perfect example of how to convey humour in advertising.

The Guardian recently launched a striking OOH campaign in Dublin and Berlin in a bid to attract more subscribers to Guardian Weekly – its international news magazine.

The Guardian enlisted artist Rafael Alejandro to create three surrealist scenes, related to the three equally surreal global news events of coronavirus, Donald Trump, and the environment. The three designs also include three phrases, “The world is… ‘confusing’, ’absurd’ or ‘in crisis’, next to the campaign tagline: ‘Find clarity’.

New European ad campaign for The @Guardian aims to drive subscriptions to international news magazine, in partnership with @OLIVER_Agency and @phdworldwide .https://t.co/KKLxRE3OQR pic.twitter.com/csFa9Pp76b

With many people feeling overwhelmed or confused about topics reflected in the media, the campaign effectively highlights The Guardian’s aim of providing balanced and trusted journalism.

Instead of billboards or the side of a building, underwear brand Knix decided to utilise a different medium to display its OOH message this year. For the launch of its new Super Leakproof Underwear, Knix used a New York City dumpster truck to ask women to “stop trashing their periods”, bringing to life its message about feminine hygiene waste. (Approximately six billion tampons are said to end up in US landfill sites every year).

Underwear so good, we thought they deserved a spot at the Met???? #StopTrashingYourPeriod

The campaign gained attention on social media, with people praising its bold message and unique execution – as well as being an example of how to breathe new life into out-of-home advertising during the pandemic.

13 stats that show how advertising is changing 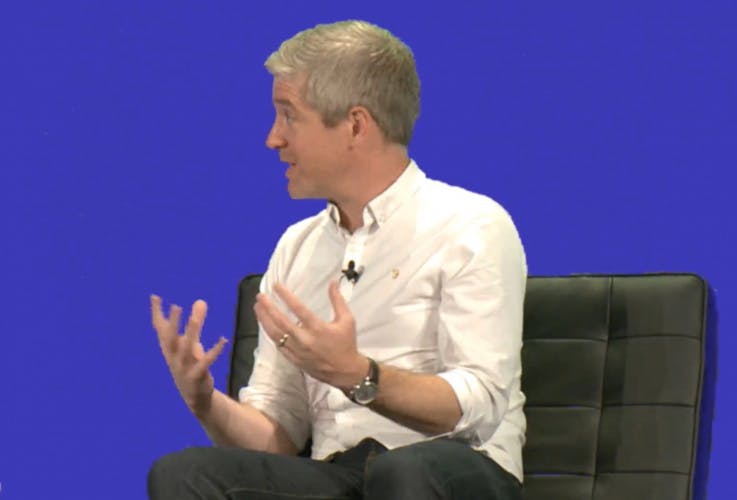 At Day Three of the Festival of Marketing 2020, IAB UK’s Chief Marketing Officer James Chandler sat down with Matthew Bushby, UK Marketing Director at Just Eat, aptly just around lunchtime, to talk TV advertising, digital brand-building, and the changes that Just Eat has observed in the nation’s ordering habits as a result of Covid-19 and the lockdown.