This week’s roundup includes news about UK adspend, AI, CX and ever so much more. Oh, and don’t forget to check out the Internet Statistics Compendium for some extra facts and figures.

Despite 60% of UK organisations believing that real-time customer engagement can deliver a 10%-40% increase in revenue, those same organisations are collecting less than a third of relevant data on their customers.

What’s more, just 25% of this dataset is being used in segmentation for real-time customer engagement.

These stats come from SAS’s Age of Now report, which also reveals how slow companies are to act. It says that only 16% of UK organisations can adjust their marketing communication in real-time based on customer behaviour.

42% of customers more impatient due to reliance on technology

A new survey by Fetch and YouGov suggests UK consumers are increasingly looking to new technology for functional purposes, with 81% of millennials being more receptive than older generations to try new tech in order to improve the speed at which they do things.

42% of UK consumers now say they are more impatient today than they were five years ago, mainly due to an over-reliance on technology to complete everyday life activities.

When it comes to food, 61% of Brits are unwilling to wait 45 minutes or more for a takeaway they ordered online or using an app. Similarly, 22% of consumers say they are only willing to wait between 11-15mins for a taxi service.

iProspect has just released its Q2 report, which includes in-depth analysis of data from more than 1,800 AdWords accounts.

It has revealed that CPC costs continued to rise in Q2, reaching their highest recorded levels since 2014. Despite this, iProspect found year-on-year impressions and clicks declined 16% and 27.5% respectively, as advertisers were forced to pay more per click while dealing with diminishing budgets.

Elsewhere, it found mobile CPC to be on the rise, increasing 17% from Q1 to Q2 of this year and 52% year-on-year. Similarly, mobile click share increased 22% year-on-year. In a survey of 503 small- to mid-size retailers, NetElixir found that 60% of respondents attribute 50% or more of their ecommerce sales to Amazon. Interestingly, 26.6% are seeing a 50/50 split from their website vs. marketplaces like Amazon and eBay.

In terms of the reasons why SMBs are choosing to sell on Amazon, 52% said that the potential for increased sales volume is the biggest benefit, 32.6% said increased brand exposure and 11.3% noted solid infrastructure. Conversely, 45% cited lower margins as the biggest downside.

What was the biggest benefit and downside of #Amazon? #webinar pic.twitter.com/OhOnUZG67Z

WARC’s latest Expenditure Report has revealed that overall ad spend grew 1.3% to reach £5.318bn in Q1 2017. But despite being the 15th consecutive quarter of growth, it was actually the slowest rate seen in four years.

This growth also occurred despite a 6.2% decline in total television advertising spend – TV’s first fall since 2009. However, it is forecast to recover next year with 2.5% growth in 2018.

According to a new report by Temando, 86% of UK shoppers prefer free delivery over fast delivery. However, the majority of retailers’ surveyed wrongly assume that customers place greater value on a fast shipping service.

As a result of this misconception, many retailers are failing to respond to customer demands, with just 27% offering free standard shipping every day. Even worse, almost a quarter of retailers admit that that they don’t use free shipping as a promotional tool.

With 58% of shoppers stating that they’d shop more if free shipping was offered, many online retailers are still missing a trick. Usage of connected TV’s predicted to grow 10.1% in the US this year

Emarketer says that usage of connected TVs will continue to surge in 2017, with 168.1m Americans predicted to use an internet-connected television this year – up 10.1% on 2016.

AI predicted to create over 2.5m jobs in the next 15 years

PwC has estimated that by 2030, 30% of British jobs will be lost to automation. On the back of this, Joblift has further analysed the situation, comparing potential job creation with jobs lost.

Research shows that 136,939 jobs dealing with AI and automation have been posted in the last 12 months, and jobs in this field have increased by an average of 0.06% each month.

On this basis, calculations suggest that over the next 15 years, AI, automation and robotics will create 2,535,009 new jobs in total. However, by 2031, 13,375,363 jobs will be at risk from automation, meaning that newly created roles would be able to fill only 19% of the jobs lost.

John Lewis has ranked first in YouGov’s BrandIndex list of UK brand ‘health’. The ranking is based on consumer perceptions of a brand’s quality, value, impression, satisfaction, reputation and whether consumers would recommend the brand to others. Pixability has revealed that the number of cause-related ads created by the top 100 global brands has increased four times over the past five years.

Women’s empowerment accounted for 24% of these ads, making it the top featured issue. Meanwhile, 17% of ads were related to the topic of community aid and 14% were about sustainability.

Pixability also found that the average number of views for cause-driven videos was almost 1m more than for those not related to a particular cause. The engagement rate was also 0.31% for cause-related ads compared to 0.29% for the rest. 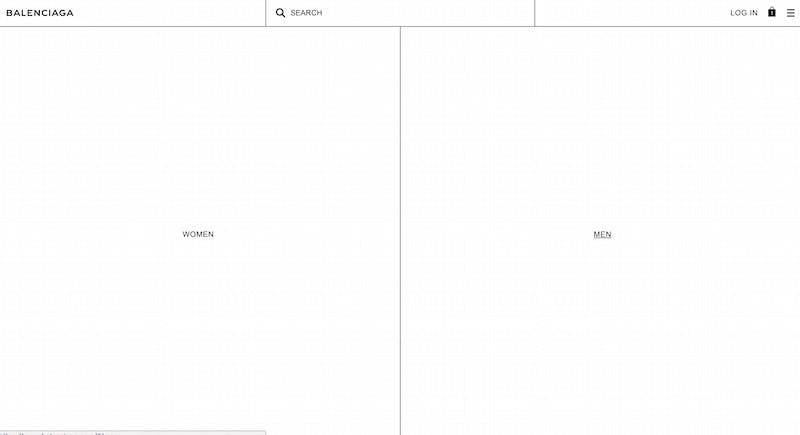 In March 2017 Balenciaga launched a new website which is pretty remarkable as far as web design goes.

You can see the homepage in the screenshot below. The rest of the website has the same utilitarian aesthetic and frankly looks as if the brand decided that the agency wireframes looked just fine as they were.

Grab yourself a coffee – it’s stats time once again.

This week’s roundup includes news about CRM, affiliate marketing, and mobile UX. As always, the Internet Statistics Compendium includes lots more, so why not head on over and give it a look-see?