So without further ado…

Nearly half of digital marketers in the UK feel overworked

Research from Greenlight Digital has revealed how digital marketers in the UK feel about their jobs.

In a survey of 281 in-house marketers, 46% said they feel overworked and 30% feel underpaid.

The 41 Hour Report also highlights the gender pay gap within the digital marketing industry, with men earning an average of 9.5% more than women.

Despite these negative findings, there are some positives, with 84% enjoying their role and 31% feeling recognised for it within the wider company. According to research by OpenText, many consumers think the rise of AI technology will positively impact customer service in the UK, specifically when it comes to certain industries.

26% of consumers said they would get better service from a robot when ordering food in a restaurant, while 20% said the same about speaking to a call centre operator.

Surprisingly, millennials are the demographic that’s least likely to agree with this notion, with 58% of agreement coming from those aged 35 to 54 years old.

57% of consumers are ready to embrace programmatic commerce

Consumers are increasingly being swayed by smart technology, says a new study from Salmon.

Apparently, 57% of consumers are ready to embrace programmatic commerce over the next two years, with 13% ready right now.

53% cite convenience as the main benefit of smart tech, with 35% already using a form of it in their own home.

Consequently, retailers need to ensure innovation in this area, or face being overtaken by competitor brands.

Analysis from Spredfast shows how people reacted to the news that the Great British Bake Off is to leave the BBC.

With over 249,000 tweets sent in the five days following the announcement, there was an 88% increase in social media discussion overall.

Negative sentiment increased by 180%, with the main emotion being anger directed at Paul Hollywood’s decision to remain on the show.

Positive sentiment towards Mary Berry fell 7%, however this was mostly fuelled by sadness.

Oh Bezza, what will we do without you? The latest data from Worldpay has revealed that women are more likely to use their mobile phone or tablet to shop.

The report found that 78% of males prefer using a desktop or laptop computer to buy online, versus 70% of females.

On the other hand, 11% of females prefer to use a mobile phone compared to just 8% of males.

In terms of what exactly people are buying, clothing retailers have seen a major boost from mobile, with 60% of mobile traffic coming from the fashion industry alone.

Burberry is the most-mentioned brand during London Fashion Week

Socialbakers has revealed that Burberry stole the social show at this year’s London Fashion Week.

With 25,091 mentions on Twitter, 42,463 new followers on Instagram and 18,231 on Twitter – the brand garnered a huge response, making it the largest UK designer on social media.

As well as producing and sharing quality content throughout the week, insight suggests that the brand’s quick reponse time on Facebook has also contributed to its loyal following.

With 10,271 mentions, Julien Macdonald was the second most-talked about designer of LFW. A new study by RichRelevance has revealed the extent to which consumers are disappointed with ecommerce search, particularly on mobile.

What’s more, 95% of UK shoppers say they will leave a retail site due to bad search results, with 68% of people saying they are likely or extremely likely to leave.

Ads and social media are key drivers for mobile spending

The new IAB mobile commerce report highlights how buying on mobile is becoming common practice for consumers, with 75% of mobile internet users making a purchase via their smartphone or tablet in the past six months.

When it comes to what’s driving mobile spend, it seems ads are a key influence, with 76% of mobile purchasers engaging with a mobile ad in the past six months.

Likewise, social media is also playing a key role in the discovery of products and services. According to data from eBay, Halloween is now a huge milestone for brands in the UK, despite the assumption that it drives more interest from US consumers.

Interestingly, it’s not just children that like to get into the spooky spirit.

Last year, there were over 2,000 searches per day for Halloween items by those aged 60+. Similarly, shoppers aged 40-49 were most likely age to search for ‘adults fancy dress.’ Online ads need 14 seconds on screen to be seen

According to a new study by InSkin Media, online ads need to be shown on a screen for at least 14 seconds in order to be seen.

In a study of 4,300 UK consumers, 25% of ads classed as ‘viewable’ were never actually looked at by participants.

Interestingly, page clutter is a big factor in determining how long an ad is looked at, reducing gaze time by an average of 37%. 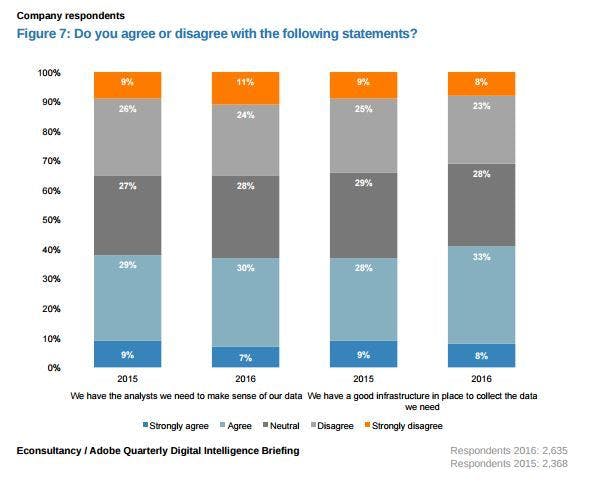 Last week we hosted Get With The Programmatic 2016 (GWTP), a conference designed to demystify programmatic and examine some of the technology steering its use cases.

A key theme that came up several times throughout the day was what marketers require to get started.

How is Adidas Football using dark social, does TV have a place in the media mix, and how did the Pogba signing go so big?