And for more insights on this market, download our State of Ecommerce in China Report.

Singapore is a promising ecommerce market for UK retailers looking to sell abroad, according to a report from Borderfree.

The country is seen as a “very attractive” market for cross-border ecommerce thanks to the highest disposable income per household in Asia, a large population of expatriates, a thriving economy and shoppers’ familiarity with global brands.

Singaporeans are also used to buying from abroad, with more than 50% of their online shopping being cross-border.

WeChat users are the most active mobile shoppers in the world, according to a report from GlobalWebIndex.

The survey of 170,000 respondents across 32 countries found that 67% of WeChat users had made a purchase via mobile, compared to 59% of Sina Weibo users, 45% on WhatsApp and 36% on Facebook. Young Indians consider WhatsApp and Facebook to be the world’s most exciting brands.

This is according to a Nielsen and Economic Times survey of 15-26 year olds belonging to SEC A households in seven cities.

Chinese ecommerce giant Alibaba is apparently being sued by luxury retail group Kering over allegations that it assisted in the sale of counterfeit goods.

Alibaba faced a similar lawsuit last summer, but Kering withdrew it after the ecommerce company agreed to cooperate on counterfeiting.

The Confederation of Indian Industry has predicted that the value of the country’s ecommerce market will reach US$100bn by 2020.

This would represent a massive increase from US$2.9bn in 2013.

It will be fuelled by rising incomes, increased internet access and urbanisation.

Mobile commerce now accounts for around a third of online sales in South Korea, according to a report from McKinsey.

Furthermore two-thirds of Koreans have shopped via mobile, generally on impulse rather than as a considered purchase.

More than half of mobile consumer decision journeys, from considering products to purchasing, lasted just one day, compared with 36% for desktop. The value of the online luxury goods market in India is expected to grow to US$35bn by 2016, according to a report from Assocham.

This means it will have tripled in size from just US$8bn in 2012.

In 2012 the luxury clothing market grew by 35%, luxury electronic devices sales increased by 38.5% while the jewellery market grew at 42%.

The increase is being driven by greater internet access and a growing middle class.

Aussies not fussed about wearables

Wearables are heralded as the next major trend in digital, but Australians are apparently lukewarm to the technology.

Lightspeed GMI surveyed 2,407 people across APAC to find out opinions towards wearable technology.

It found that while a third of respondents in China and Malaysia claimed to own a wearable, this fell to 20% in Japan, South Korea, Hong Kong and Singapore, and down to 11% in Australia and New Zealand.

Furthermore almost two-thirds of Australians (62%) said they had no intention of buying one.

This is compared to an average of 38% across all respondents.

Women make up just one-third of India’s online population, and many apparently have no inclination to gain internet access.

According to a Google India survey of 828 women aged 18 to 55, 49% of respondents saw no reason to go online while 43% simply said they weren’t interested.

Another 42% said they were put off by the fact they didn’t know how to do things on the internet.

UX issues are still a common cause of basket abandonment in Australia and New Zealand, according to a Rackspace survey of 1,000 online shoppers.

It found that 45% of respondents had abandoned a purchase after encountering difficulties with a website while 47% had gone to a different site to purchase the same product.

More worryingly (and a bit dubiously) 29% of respondents said they had given up on ecommerce altogether due to a poor user experience.

Looking at the leading causes of frustration, popup ads were cited as the worst UX crime (42%), followed by the online experience failing to match that in-store (34%) and the time spent in narrowing down the available options (28%).

However the data from iResearch Consulting Group shows a slight decrease on Q4, when m-commerce was apparently worth 380.2bn Yuan.

M-commerce accounts for 47.8% of the total ecommerce market and is expected to top 50% by the end of the year.

Alibaba’s Taobao dominates the market with 84.5% of total mobile sales.

Thanks to the use of social media by Obama’s team in 2008 and 2012, the role of digital marketing in politics has been a hot topic.

Online was a key battleground in the recent general election, and this trend will only increase in the years to come.

I’ve been talking to Craig Elder, Digital Director at the Conservative Party, about the role digital played in a Conservative victory. 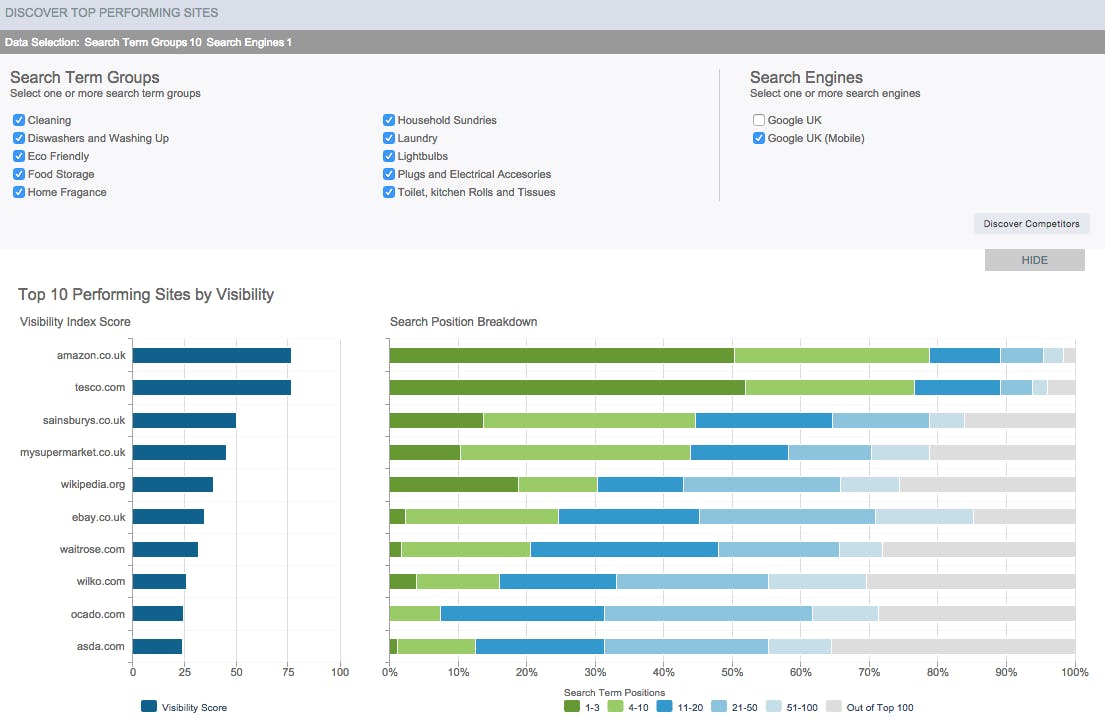 A recent study found that Tesco was the most visible supermarket website in mobile searches on Google UK.

This may come as no surprise, since Tesco dominates the grocery market in general. What is surprising though, is how much Amazon has muscled in on this market.

One of the most popular platforms, Instagram, will soon open its doors to advertisers large and small.