Despite the mass adoption of paid social ads by some of the world biggest brands to communicate with specific demographics and sell to them, there are many brands that still use Facebook pages organically to good effect.

Although the purpose of a Facebook page may have shifted from the early days of the platform, there are various ways brands are using their pages to service, speak to, sell too and entertain their loyal followers without having to pay to play.

As such, I’ve compiled a list of 25 of the best and most interesting brand Facebook pages we could find and why they work.

A brand that gives you more than you expect on Facebook is Complex Magazine. Aside from its editorial content, it uses the spotlight for its latest video content, shop to sell its merchandise, and the sidebar feature for ticketing and links to other social channels.

In short, Complex has made its Facebook page a mini-website for its near five million followers. 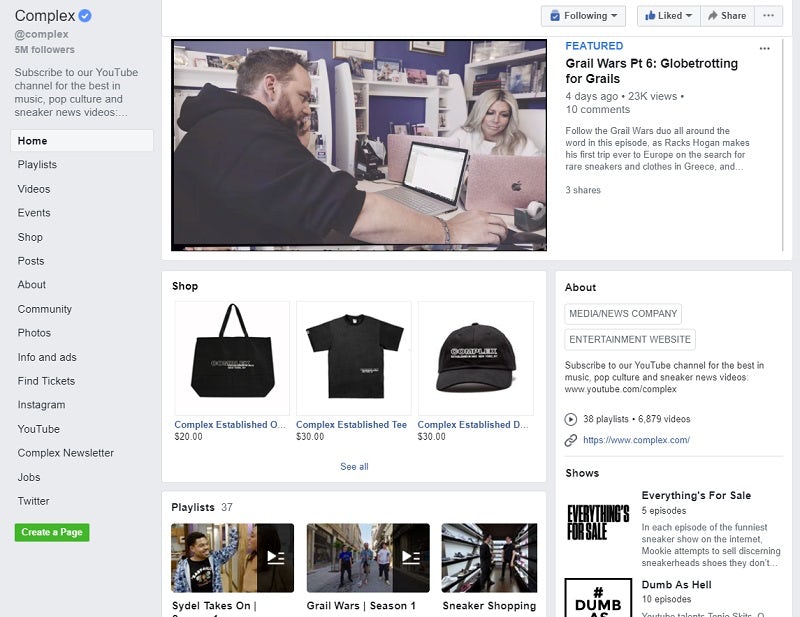 Genius has gone from destination for your favourite lyrics to cultural conversation starter and that’s, in part, due to its presence on Facebook. Using conversational language, emojis and consistently styled imagery for nearly all of its posts followers know exactly what to expect from Genius and it provides music lovers with a place to discuss their favourite songs, music videos and related content from the world’s most popular artists. 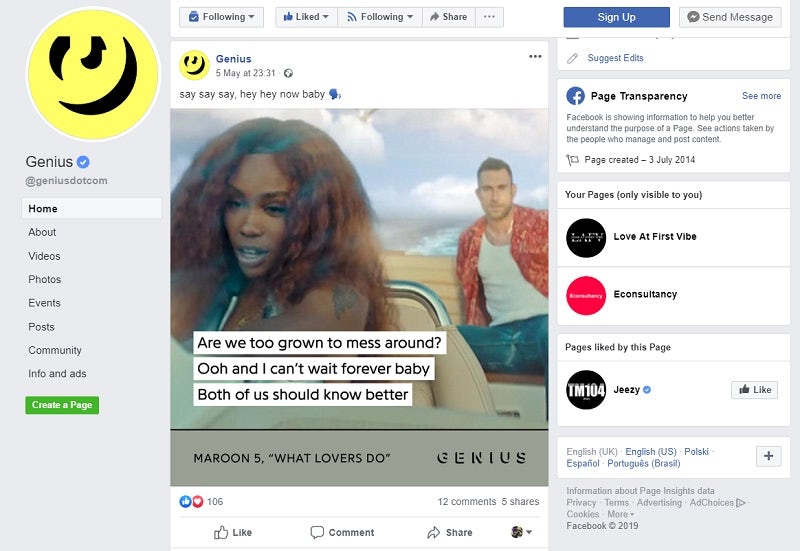 Tough Mudder is a brand with community at its core and this is something that it exudes on its Facebook page with humourous and sharable content.

Like Complex it uses the sidebar to give its followers the option to engage with on its other social channels as well – giving it a microsite feel. 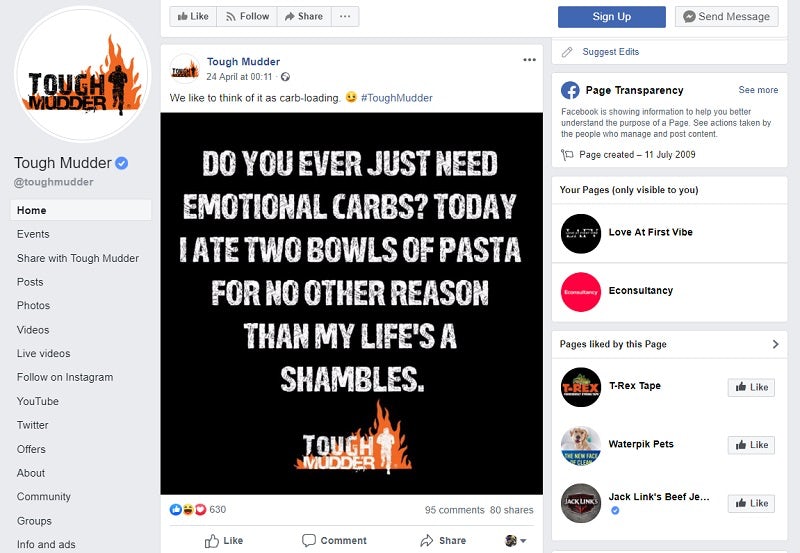 Tourism Ireland uses visually arresting UGC, editorial pieces and informative videos to keep its Facebook page feeling fresh. By involving residents and visitors to Ireland, the organisation has created a page that makes people want to discover more about the country – and perhaps make it their next holiday destination. 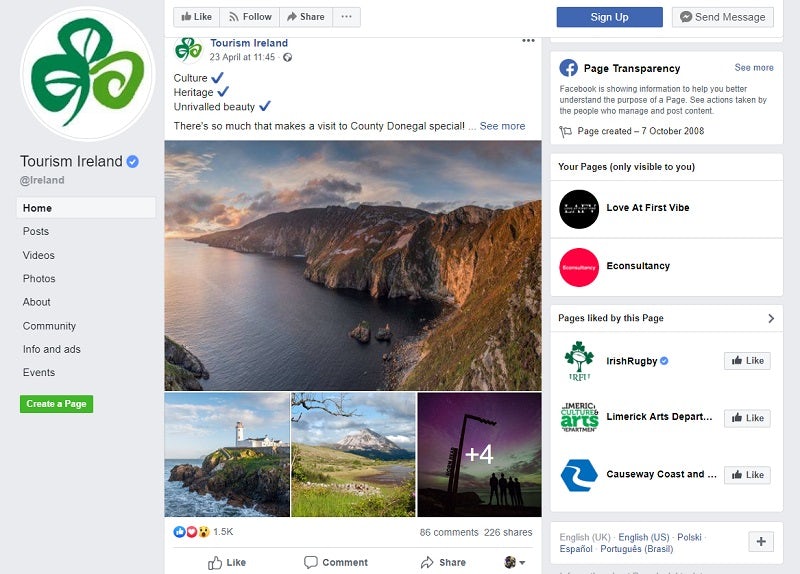 One of the only brands making use of the Spotlight feature available to Facebook page creators is Walmart. The American supermarket chain showcases its videos – ranging from high quality ads through to gameshows like the ‘Grocery Pickup trivia’ video below. 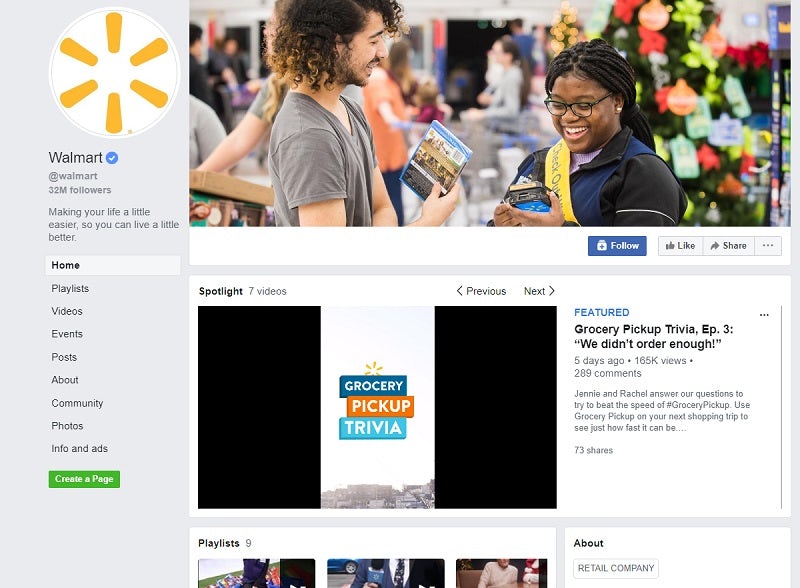 Shoppable posts are taking off on Instagram but Polaroid ensures it utilises the feature on Facebook to capitalise on the swing toward social commerce. Photos of its products in action help capture the imagination. 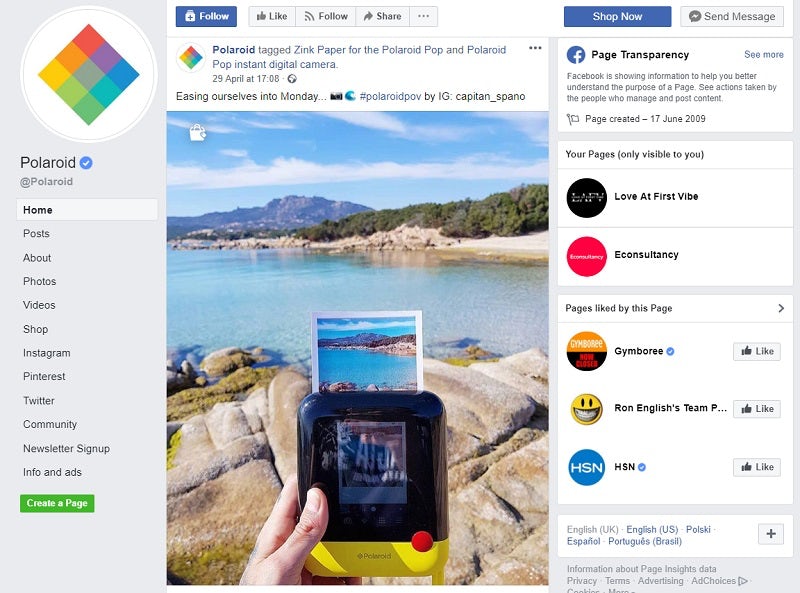 Burberry, much like the other fashion brands on this list, makes use of high-quality images of its latest collections to entice and inspire its loyal (17 million strong) fanbase on Facebook. Part of the reason the brand maintains such high levels of engagement, likes and shares is its consistent aesthetic and clear creative direction. 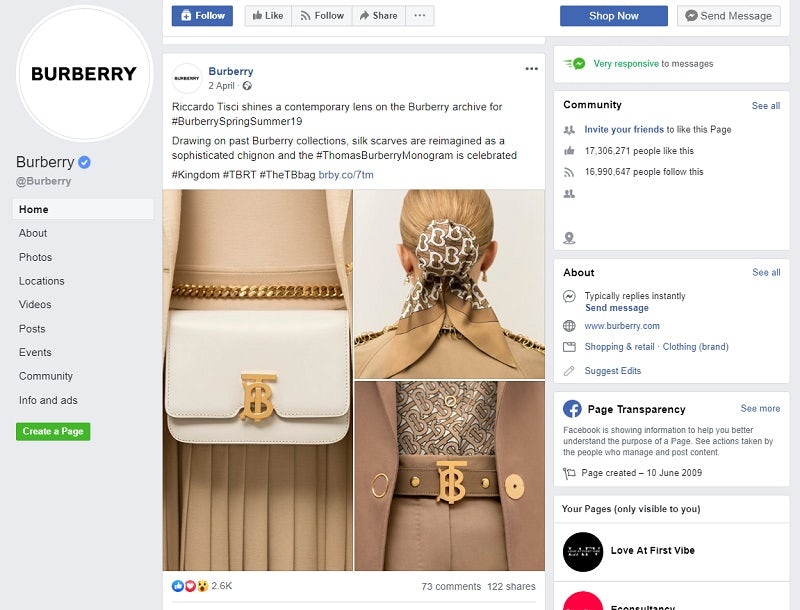 Although synonymous with Instagram, Glossier uses storytelling from its customers to bolster its community on Facebook and soft-sell its products. This is an effective way to keep its followers invested in its range of existing and new products in a way that’s true to the brands community focused ethos. 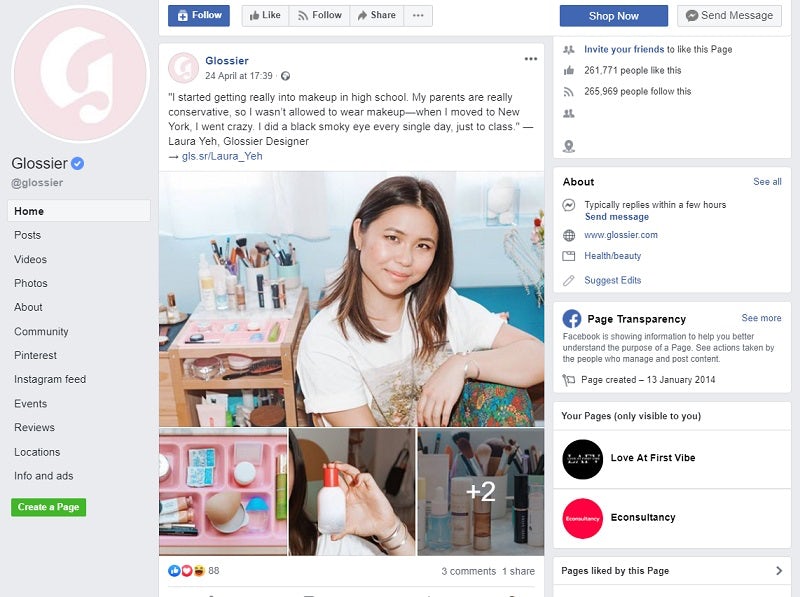 Music and social media tend to go together and streaming platform Spotify fosters discussion on its Facebook page. Outside of the posts about album releases, anniversaries and updates it gets its Facebook community involved with great pieces of content like the one featured below (“The last song you listened to is your Game of Thrones House name”). 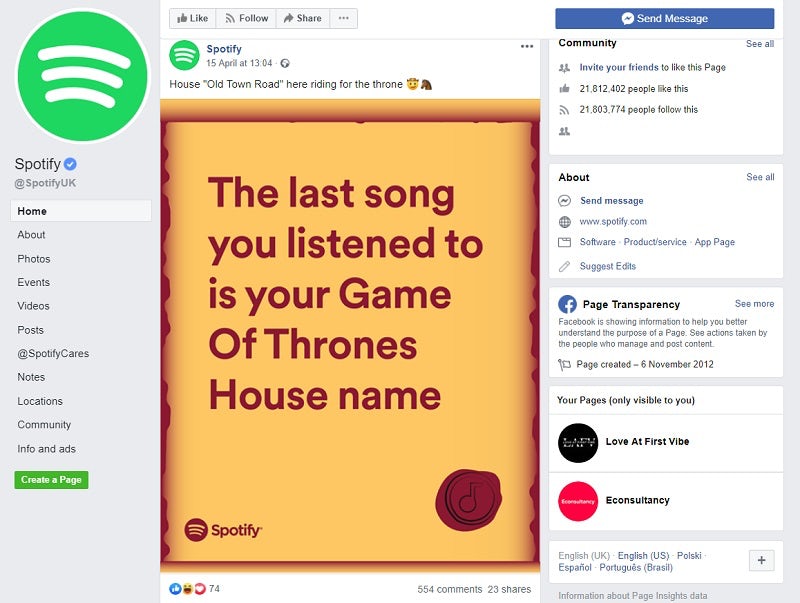 Samsung’s Facebook Page strategy is clear: post up to three times a week (and it has to be video). With Facebook prioritizing video content, the Korean company has nearly perfected the art of giving its followers something different every time. If Samsung isn’t showing you its latest Galaxy S10 phone, it’s sharing content from influencer campaigns. 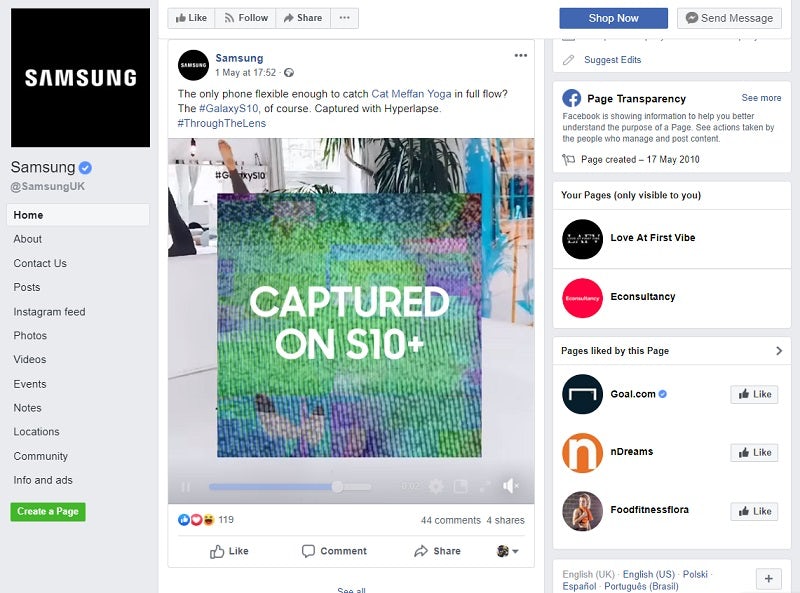 American fashion brand Supreme uses high quality photography to bring its products to life on its Facebook page. Supreme’s brand is synonymous with its community of loyal fans – they often camp outside its marquee stores around the world – and its Facebook page is almost like a look-book for its followers.

You’ll also notice the use of the ‘popular hours’ feature to tell its followers when’s best to pop in for a peak at it infamous Thursday clothes drop. 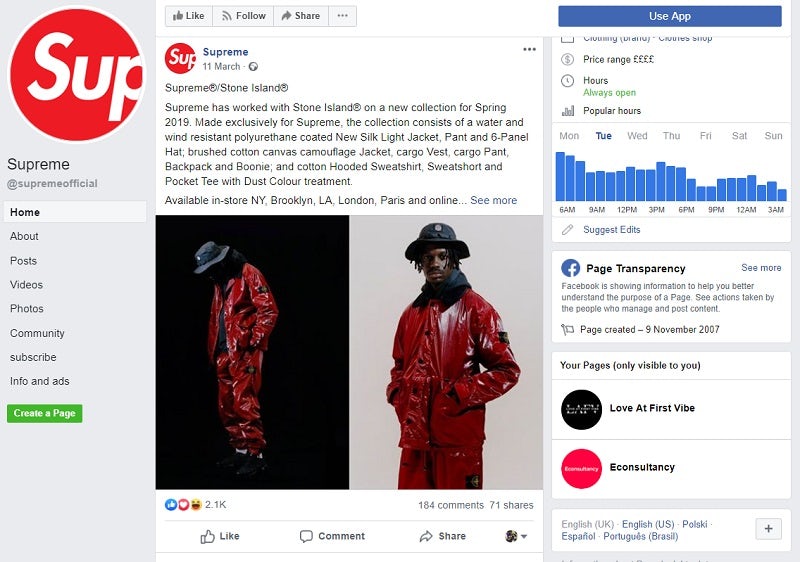 Aside from being very responsive on its Facebook page, Adobe gives its users the opportunity to showcase their talents by posting cover photos created by its customers. 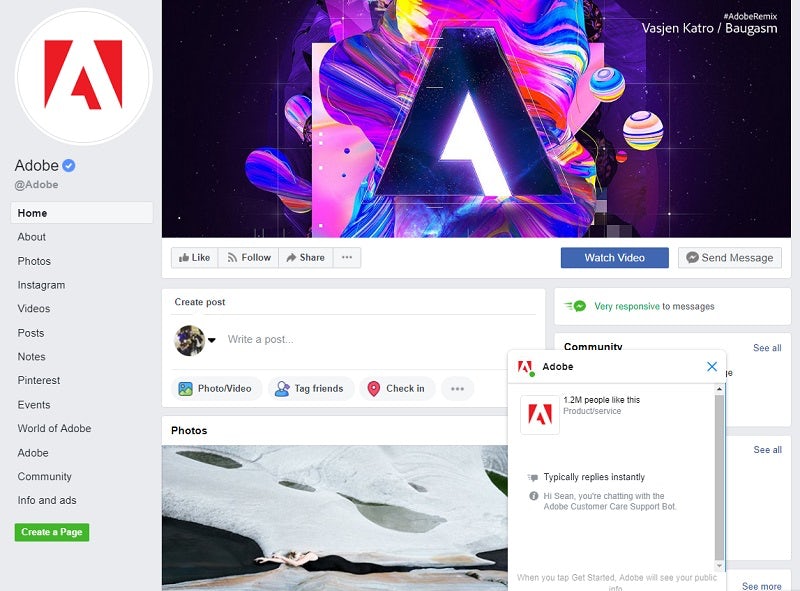 Toyota in the UK does a great job of using the full capabilities of the Facebook platform – in this case its 360-degree images feature – to promote its product. Here we get a chance to check out the interior of the brand new Toyota Rav 4.

Social customer service is clearly a priority for the brand as it responds to messages on Facebook within the hour. 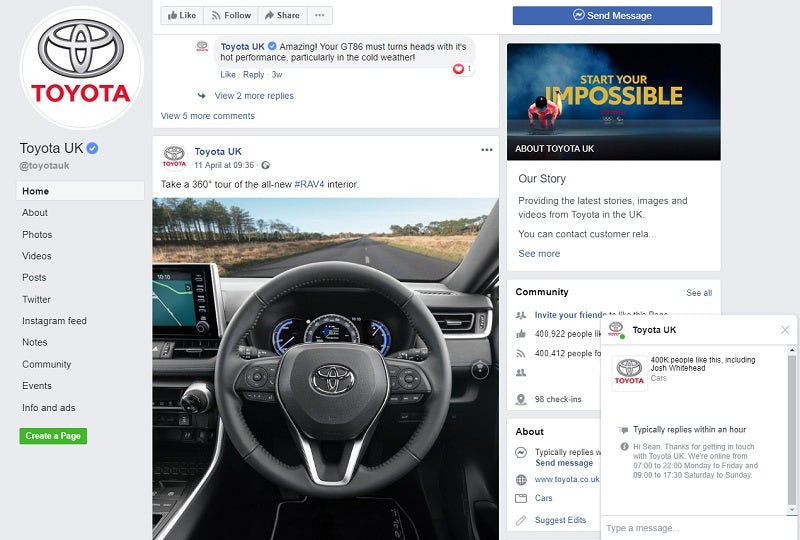 General Electric is another company using the media formats on Facebook to full effect – note the “move your mouse to view the photo in 3D” label at the bottom of the image in the screenshot below.

Outside of the interactive images, you can expect to find news articles and videos showcasing their latest innovations. 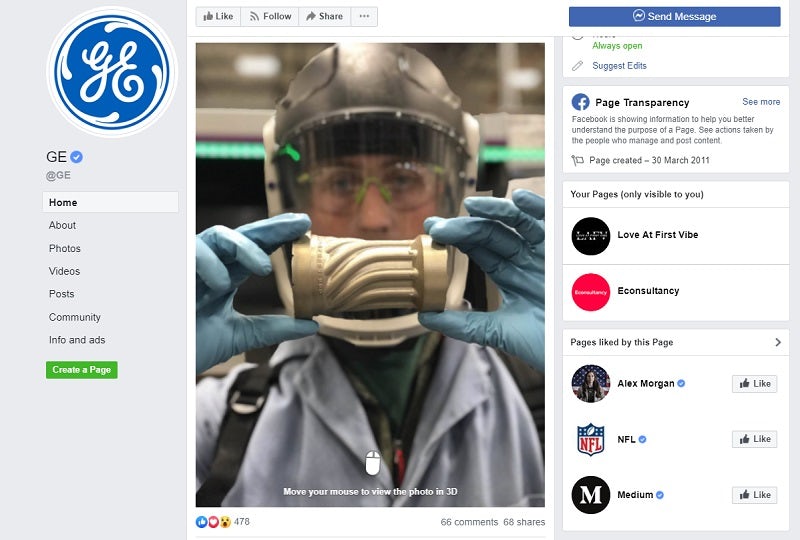 By staying true to both its customer-centricity and its distinctive branding, the Mailchimp Facebook page is an excellent example of consistency. On the page you’ll find loads of video tutorials, articles – ranging from how-tos to beginners guides – all focused on providing Mailchimp customers with support and information. 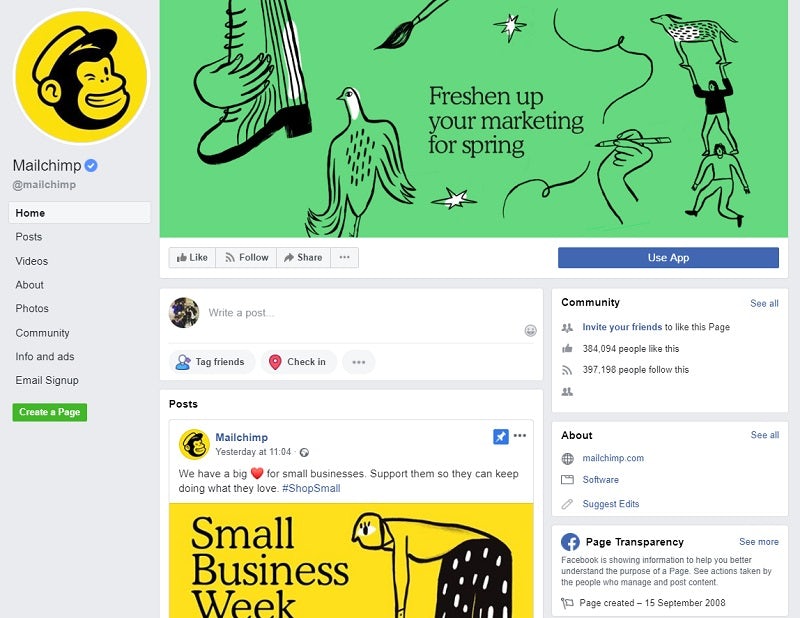 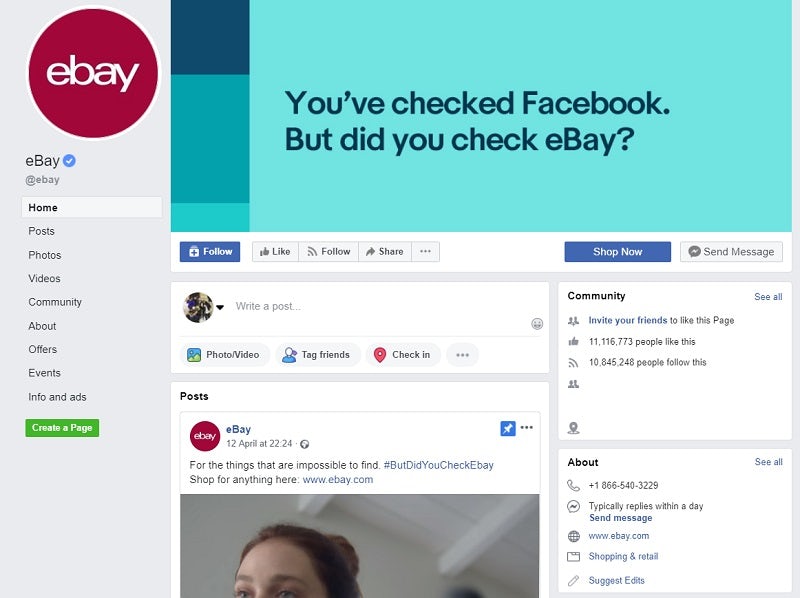 A slightly different approach to using the cover photo comes from popular German car manufacturer BMW. The company uses a promotional video, instead of a classic static car shot to captivate visitors to its Facebook page. 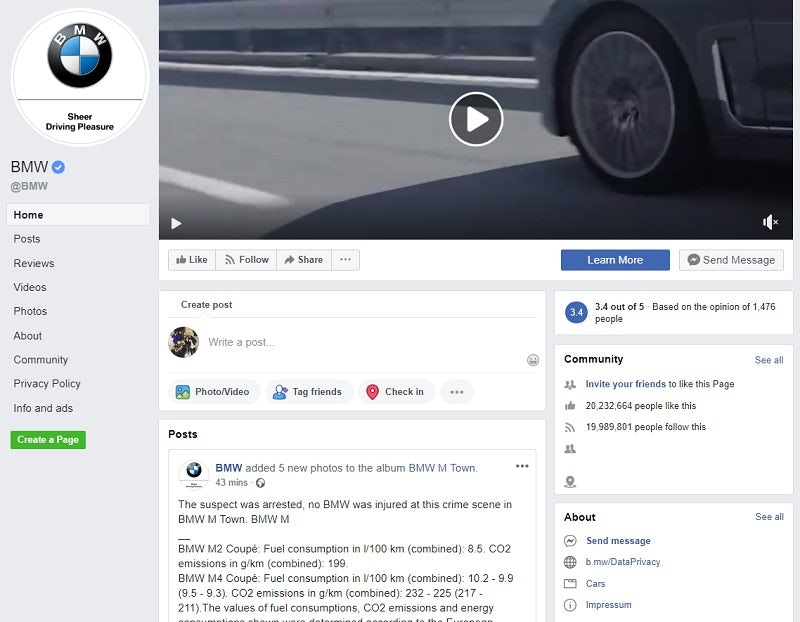 Chanel relies on its arresting images and videos on its Facebook page. As with many fashion brands on social, a lot of Chanel’s content is influencer / ambassador led for maximum impact in the news feed. 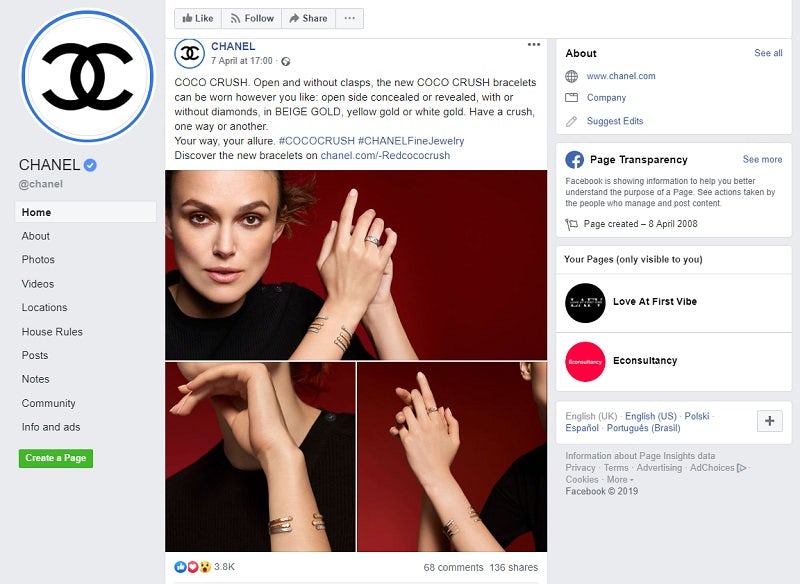 Like BMW, UPS uses its cover art to good effect, showcasing its latest campaigns. The Logistics company also uses Facebook as a PR channel to capitalise on user-generated content featuring its brand and employees (such as this UPS worker showing his basketball skills). 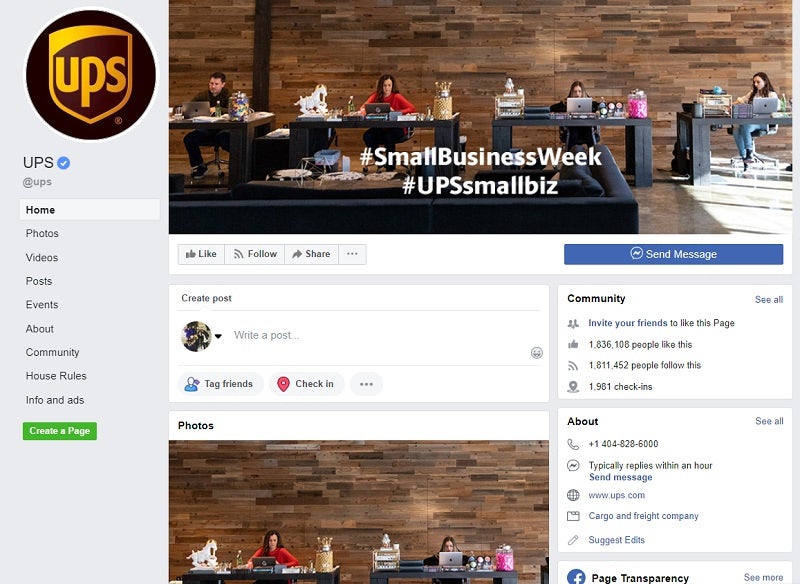 eBay UK takes a slightly different approach to its global parent page. Instead of focusing on recommending products for its followers to bid on or shop for it focuses on promotions and explaining the benefits of using eBay – like Nectar reward points – to its two million fans on Facebook. 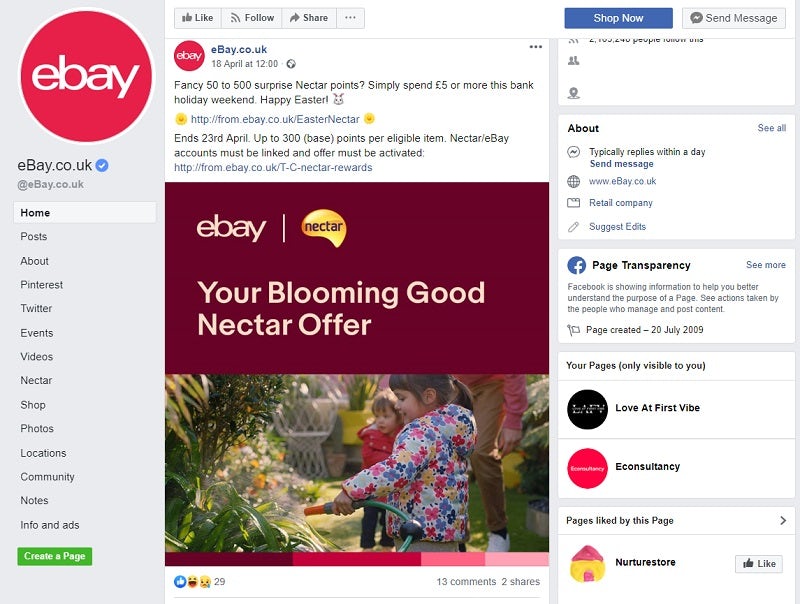 Gillette uses a mixture of user-generated content and storytelling to keep followers coming back. Posting tales of real customers using its products almost feels like offering up shaving tips from friends. 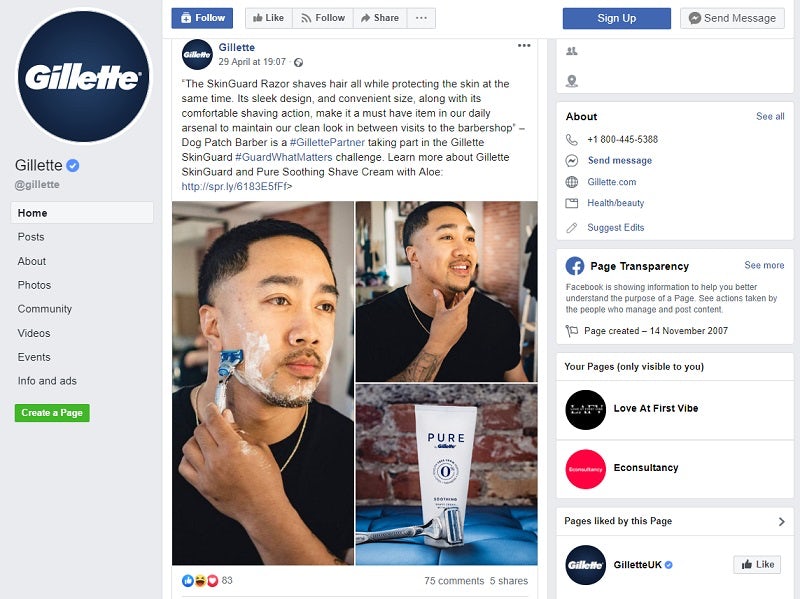 BP has made its Facebook page a PR channel and place to showcase its sustainability efforts with its shareable promotions, illustrations and short videos. 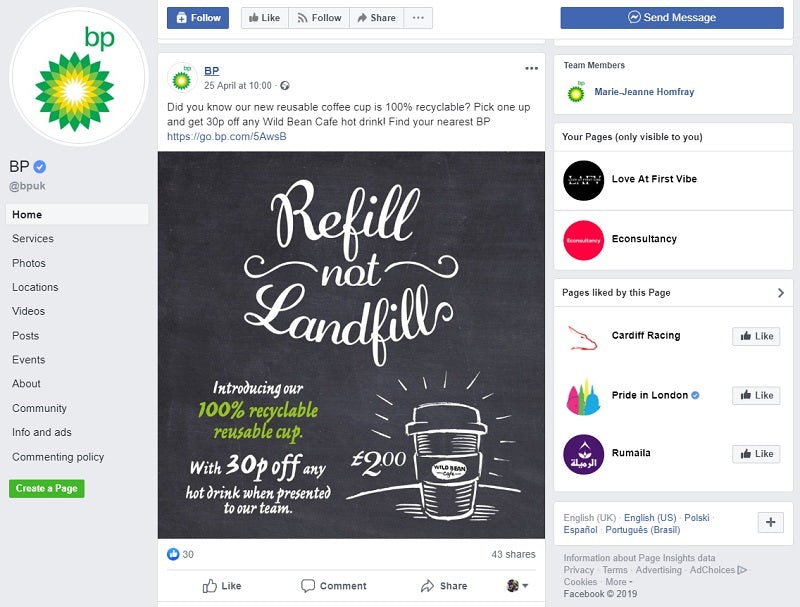 Some tried and tested promotional marketing from McDonald’s in the UK – its annual Monopoly campaign takes up the prime real-estate of the cover photo.

McDonald’s UK also shares short ‘Vine-style’ videos on its Facebook Page to entertain its followers – take this Monopoly one for instance. 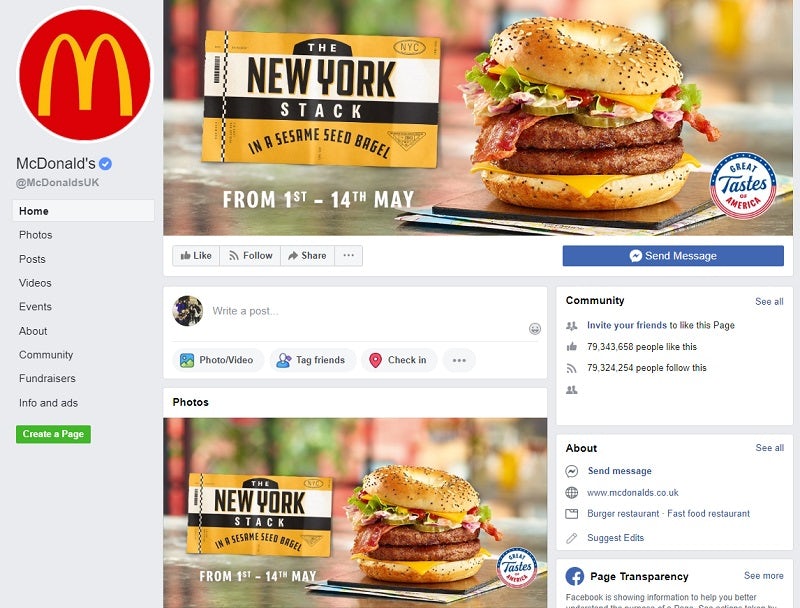 Coca-Cola still uses its Facebook page and organic reach to promote competitions, upcoming events and the occasional campaign – in that respect, not much has changed since the Facebook Pages of 10 years ago. 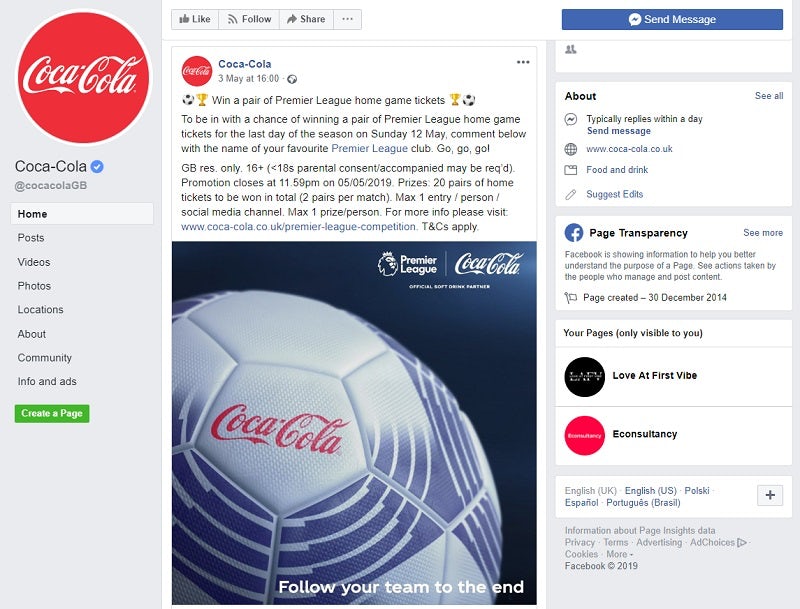 AmEx uses its Facebook Page to share information with its customers about some of the perks they’re entitled to – e.g. #AmexPresale. This is a nice and appropriate way to communicate this information to genuine followers of the brand and its customers.

The page admins offer near instantaneous responses to customer queries. 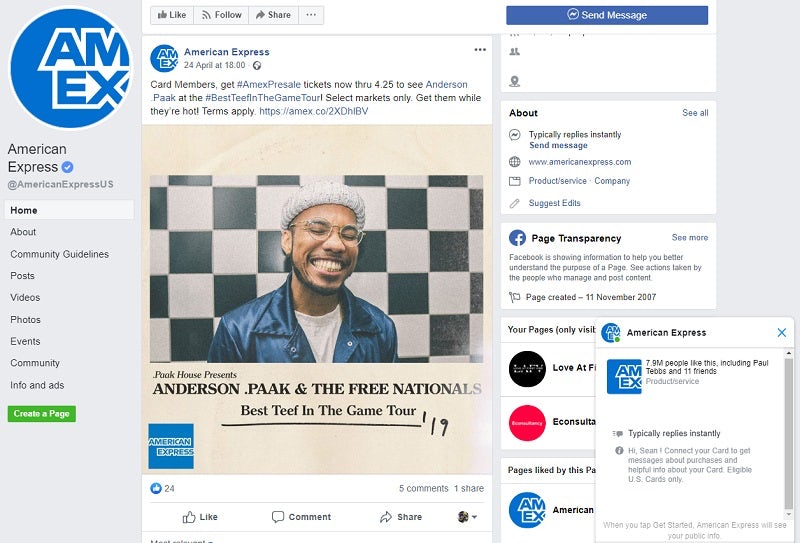