There’s a fantastic piece in The New Yorker which first drew my attention to Amtrak in February, entitled Writing powered by Amtrak.

It’s an even-handed expose of Amtrak’s commitment to content creation through social media reconnaissance, taking in multiple publications, journalists and all beginning with a single tweet. Jessica Gross tweeted about an article in which the writer Alexander Chee mentioned a wish that “Amtrak had residencies for writers” as many believe that trains are perfectly conducive to creative thought.

Gross was then asked by Amtrak if she would like a free trip to capitalise on this desire. The New Yorker article reveals that Amtrak later asked for her to “share any content that [you] find along the way with your social networks, and then have you do a Q&A for the Amtrak blog”.

Gross asked if this was ‘a deal’ where she had to write about Amtrak in exchange for a free seat, something that made her feel justifiably uneasy, but Amtrak assured her that this was no requirement and any organic desire to talk about her trip would be great but not part of a deal.

In February Gross published an article based on her trip in The Paris Review (click below). What you’ll notice in this article is a lack of ‘sponsored content’ label or ‘advertorial by Amtrak’ caveat. That’s because it isn’t necessarily native advertising. There was no deal in place to produce this article.

There’s a disclaimer in the second paragraph with a link to an Amtrak blog post saying the trip was free. The rest of the article is a warm mediation on why trains are such a fruitful environment for writers. It doesn’t need to be spattered with ads and links to Amtrak. The writers and publishers are organically doing the marketing work for it.

Both The Paris Review and The New Yorker has covered the background of the article I’ve mentioned above, each article linking to each other’s and in turn linking to the Q&A with Jessica Gross featured on Amtrak’s own blog. The article itself is a great shareable piece of content, but also the story behind its creation has also become a winning piece of shareable content too.

After this trial run, Amtrak planned to make the writer’s residency a regular feature, sending two or three writers a month on excursions. Obviously these people will likely have sizeable social media audiences in order to make it mutually beneficial.

Amtrak’s social-media director Julia Quinn in an interview with The New Yorker revealed that her hope was that writers on the residencies would feel compelled to write about their journey’s (good or bad) and that this wasn’t a disingenuous scheme:

Amtrak’s blog has a great mixture of video, its own produced articles and posts written by its own customers. It’s a great looking blog, flatly designed and fully responsive, it also publishes an article every day keeping things suitably fresh. I also like the handy ticket buyer on the right hand side. A convenient tool that means you don’t have to go to a separate ecommerce site to buy tickets.

There’s loads of great content here and its perhaps the diversity that keeps it so interesting.

Last year Amtrak created a tool with Google which allowed you to track more than 300 daily trains and accurately predict arrival times. Amtrak makes its own important safety information entertaining and shareable. Here’s a blog post on Amtrak’s baggage policy, which obviously isn’t the sexiest subject but it is something you’ll always check before you make a long distance journey. Some of the best articles offer multiple experiences. Why a ride on the Texas Eagle needs to be on your bucket list contains a gorgeously shot video featuring lots of impressive footage but also charming soundbites from Amtrak staff and passengers.

The article itself also contains great practical advice on what best to see along the way while subtly mentioning the benefits of riding with Amtrak.

Of course all of this content would be for nothing if there wasn’t the well-maintained social media channels to spread the good word.

Amtrak’s Twitter page is the first social port of call to check out Amtrak’s content, which it publishes regularly. However it’s the mixture of this with channel exclusive content that makes it worth following.

I particularly like the fiendishly difficult image based quizzes…

… and also its commitment to customer service.

@honey_child_plz You may consume private stock alcoholic beverages only in Sleeping Car accommodations for which you have a valid ticket.

In fact its commitment to replying to not just @ mentions but also indirect mentions is pretty impressive.

@jenazbananaz First to Alexandria on Amtrak….enjoy. Check to see if there is a Snack car onboard.

@ArielSimone____ We apologize. Please let the conductor know, so the temperature can be better regulated.

Amtrak realizes the necessity of monitoring your brand on Twitter regardless of direct mentions. After all only 9% of tweets mentioning companies start with @, which is a scary consideration for any company not monitoring fully.

Amtrak also realises the power of visual mobile-first social media and the fact that its passengers are more likely to post positive updates on their journey via these channels than others. As well as its own pictures and suitably retro bits of merchandise from the past. 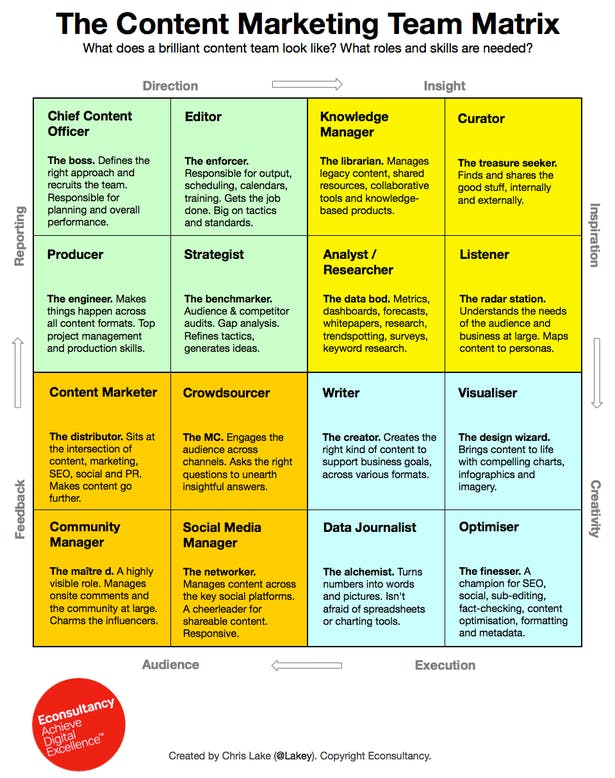 A few months ago I created the Periodic Table of Content Marketing, to provide a handy – and hopefully helpful – cut-out-and-keep guide for content professionals.

The table was both practical and tactical, which resulted in more than tens of thousands of shares, and hundreds of thousands of views. I remain humbled by its popularity, and the feedback I’ve had since I published it.

Since then I’ve been asked many questions, of which two stand out:

To answer the first question, it’s simply that content strategy is such a big subject that it merits a table of its own, or something similar. There is much to be said about audiences, legacy content, global vs local approaches to management, team workflow, brand guidelines, and countless other important things. Watch this space.

The second question is one close to my heart.

Since 2006 I’ve had the pleasure of assembling a marvellous team here at Econsultancy. We box well above our weight – there are only six of us on ‘Team Content’ yet we’re averaging more than a million stories read a month. Not bad, for a niche blog.

But what would a content team look like if I were to assemble one from scratch today? What skills are required in 2014, in the post-social, content marketing, mobile age? What is the perfect recipe for success?