It was 10 years ago that Victoria Beckham first launched her own fashion label.

With each collection released in the past decade, the former Spice Girl has continued to impress critics, leading to the opening of two landmark stores in London and Hong Kong, and hundreds of department store concessions worldwide.

The Victoria Beckham ecommerce store first launched back in 2013, giving shoppers the opportunity to get their hands on the designer’s ready-to-wear collections online. Now, to mark the label’s 10-year anniversary, the site has been revamped.

So, what’s new, and how does it compare to other luxury fashion sites? Here’s a review, focusing on some key areas of interest.

The first thing that strikes me about the new Victoria Beckham website is actually its simplicity.

Having reviewed a few luxury retail websites before now, I’ve noticed that there can be a tendency for over-the-top or quirky design. Take Chanel’s content-heavy and video-rich site, or Balenciaga’s arguably bizarre ‘normcore’ aesthetic.

Victoria Beckham, on the other hand, strikes a balance. The homepage is probably the flashiest part of the entire site, involving a site-wide video of a runway show.

This is an immediate nod to Beckham’s dedication to her craft – she’s well-known for overseeing all production and design herself, as well as adhering to the traditional runway calendar. Apart from the video, there’s very little content on the site, and certainly no indication of Beckham the celebrity.

Accordingly, the design aesthetic is also very understated, with a small and subtle font and a small left-hand navigation menu.

Interestingly, the site is on Shopify, but its design is different from the typical style, which usually involves drop-down menus and large, graphic-based headers. On mobile, the homepage video is replaced with a single image. While this makes the UX less impressive, the site is still nicely optimised for mobile, just without some extra bells and whistles.

Another interesting element of victoriabeckham.com is its similarity to other, more affordable fashion ecommerce sites.

Moving on to the category pages, the design is strikingly similar to Zara, particularly in terms of how it uses large block imagery to showcase items. There are a couple of features that elevate Victoria Beckham above Zara’s UX.

One, for example, is that when you hover over each product image, you are able to see what sizes are available without clicking through.

Another nice touch is the option to ‘shop the look’ on each product page, which identifies each item in the main image and allows you to add this to your basket. While images are plentiful and high quality, one noticeable downside of the product pages is an absence of video. This is particularly negative given the high price tag of the designer label, meaning that consumers need all the reassurance possible in order to go through with a purchase online.

The lack of product videos might not be disastrous, but it would have been a valuable asset for shoppers wanting to see how the items look on a moving body. One of the main reasons behind the site’s relaunch has been to satisfy international shoppers, with Victoria Beckham now offering worldwide shopping online.

As well as this, the site also allows users to select their own currency, adding an extra layer of convenience, and cementing the label’s global status. Building on this, the site also offers multiple payment options during the checkout process. PayPal is commonly used on most retail sites, but Amazon Pay and Google Pay are less so.

There’s not much difference between them – the latter options allow you to pay using the details already stored on these platforms. However, having the option is certainly a positive, allowing shoppers to choose what is most convenient or suitable for them. Another positive note is that standard shipping is free (and fairly fast) in the UK.

While victoriabekham.com is largely uniform, there is one unexpected feature.

When you click on ‘customer hub’ at the bottom left of the screen, text saying ‘a dark but happy place’ appears below. If you click on this, you get a negative version of the site (i.e. black background and white text instead of the reverse). This might be a slightly odd and seemingly meaningless feature to most, however as with most easter eggs, fans are likely to recognise the inside joke.

From what I can gather, it stems from Victoria Beckham’s sell-out slogan t-shirt with the same phrase. The item was a sly nod to the media image of Beckham as someone never photographed without her sunglasses, with the designer joking that inside her shades is her “dark but happy place”.

In this context, the easter egg is a subtle example of branding, and a rare allusion to the woman behind it all.

It’ll be interesting to note whether the site is updated with other features like this in future, and considering the lack of any editorial features, it could give fans a reason to return (other than to check out new items added). Some final features that elevates the UX include the ‘customer hub’, which is a neat little section that collates FAQ’s, delivery info, and privacy notices. With most websites spreading out these details across different sections, it’s handy to have it all in one place. Its name is also self-explanatory, letting customers know where to head to find out more.

Another good feature is store information, which includes pop up Google maps to offer directions. There is nothing particularly ground-breaking about victoriabeckham.com. Many of the features are standard on good retail sites, and there are certain things that could do with improvement.

Navigation could be easier and more fluid, for example, as it takes multiple clicks to get to a particular category (e.g. ‘dresses). Product videos could be valuable, too, as could wider content or editorial features.

At the same time, there is a lot to appreciate. Slick and pared down design makes it feel fuss-free, mirroring Victoria Beckham’s wider brand aesthetic. Luxury shoppers might not appreciate the similarity to Zara, however, this makes for an accessible and easy browsing experience.

Lastly, it has certainly succeeded in achieving its main goal, effectively catering to worldwide consumers on the hunt for Victoria Beckham designs (and making the experience as convenient as possible). 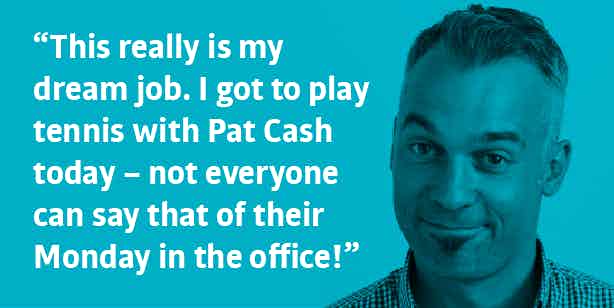 Joyce knew he wanted to be a marketer from an early age and describes his current role as his dream job. Let’s find out why…