In 2017, Nike announced its ‘Consumer Direct Offense’ (even the business strategy sounds like a sports play) saying the brand will use the ‘power of digital’ to drive growth by ‘accelerating innovation and product creation, moving even closer to the consumer through Key Cities, and deepening one-to-one connections.’

DTC revenue was already growing at Nike in 2017, but the progress since then has been startling, with improvement to its website, apps, stores and the NikePlus membership scheme. Here are some numbers:

Browsing on my couch

Nike’s Alphafly Next% shoe made me realise just how directly I connect with Nike as a brand and a retailer. I got a notification this month from the Nike app on my phone, which took me to a landing page telling me about the shoe and the feat of Eliud Kipchoge running a marathon in under two hours. 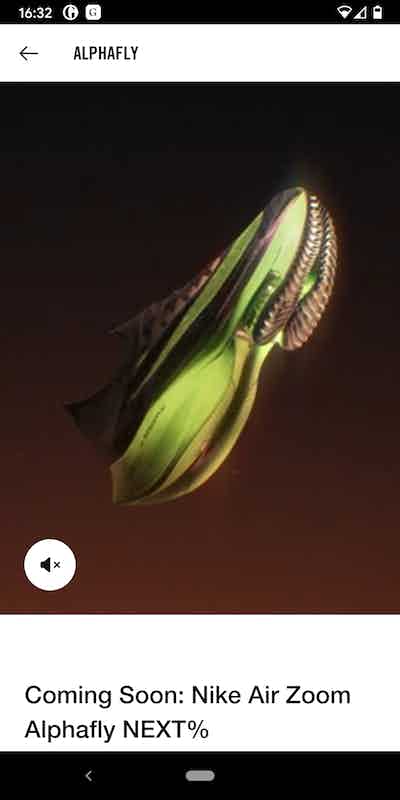 The page the notification took me to was fairly simple in layout (partly pictured above) but was carried off with all of Nike’s usual confidence – great product shots and video, impactful copy about the technology in the shoe, and a button to tap to ‘get notified’ of the shoe’s release (due out at the end of February in the US and late in March in the UK).

Talk about a nice segment of customers to have – people who have found the Alphafly landing page, clicked to receive updates and are interested in blowing at least £250 on a running shoe (price not yet confirmed). 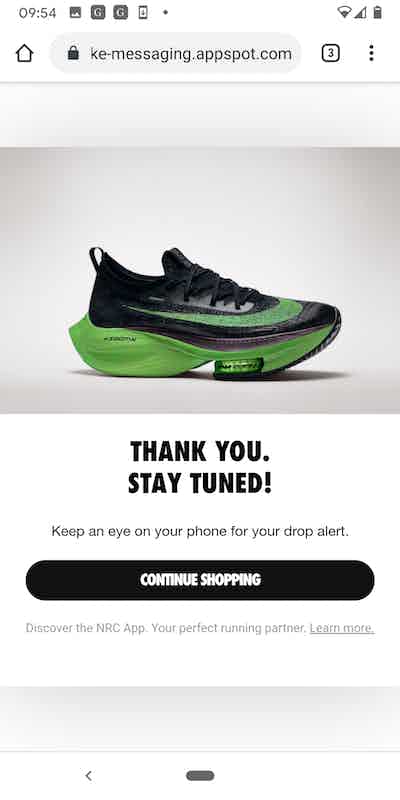 Here’s the interesting bit from my point of view. I am not somebody who will spend that amount of money on a shoe. I buy one pair of Nike shoes every year with a spending limit of £75. But, I do enjoy browsing sale shoes, new releases and the like, and have found that over the last few years Nike’s website and app has provided me with the best experience to do so.

Everything is good, from faceted navigation to product details pages, imagery and video. I’ve written about this before.

Nike’s digital products come together with its marketing prowess to create some very rich experiences.

Back in 2017 I watched some of Kipchoge’s original two hour marathon attempt in a previous version of the Vaporfly shoes (he was in the shoes, not me). And I watched his successful attempt last year in Vienna (he was in Vienna, not me). Breaking2 was, in my opinion, a better marketing stunt than even Red Bull and Felix Baumgartner – the product was so integral to the project, the livestream was great, the aftermath compelling, and the feat was so human and the message so clear (buy this shoe and you will be better).

In between Kipchoge’s attempts I loved many a Nike campaign, from Tiger to Serena to Kaepernick, usually via social media.

Once these incredibly well-told stories are layered on top of a rapidly changing product range, great product imagery and editorial, I’m hooked enough to have a little browse of the website whilst I watch TV.

Would I ever sit and browse the Foot Locker website whilst I’m watching TV? No.

But what about the Adidas website or app? Again the answer is no – the digital products are pretty good, but without the marketing juggernaut, the same effect is not achieved. It takes the combination of slick products and great campaigns. I’ll give you a couple of simple manifestations of this:

Here’s an example – if you’re into running you can go to the running section of the Adidas website and find a button right in the middle of the page which says ‘Find focus’. Click it and you get some content about mindfulness and running. Whilst I completely agree with the sentiment, as a shopper it feels like quite boring content marketing to me – that’s what it is really, here’s just one paragraph:

“Most people seem to think mindfulness is found in a yoga studio, through mediation or calming stones. But if you’ve been running for a while now, you may have already come across the benefits running can have on your mental wellbeing.”

Nike doesn’t bother with any of that blogging business, its running page is, ironically, more focused. It’s all about performance and product. A big product image at the top of its running page – “Designed to help reduce injury”. Followed by big sections – ‘find your perfect running shoe’, ‘latest apparel drops’ and ‘shop running shoes by surface’, with a button at the bottom to help you download the Nike Run Club app. Being completely fair, Adidas has lots of this on its running page, but again it’s more muddled and lacking in confidence. 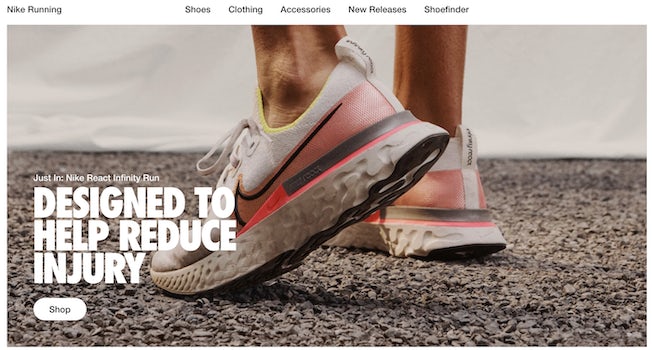 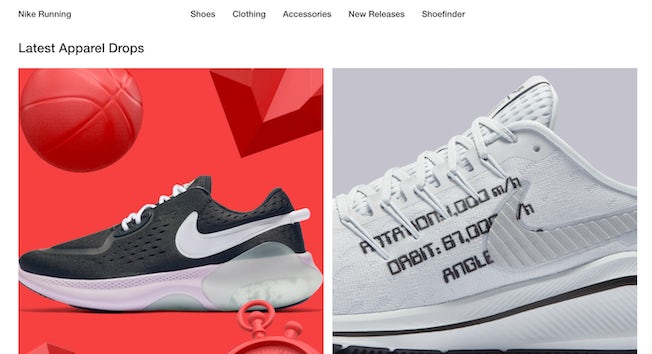 Latest apparel drops, all about the product. Image via Nike.com 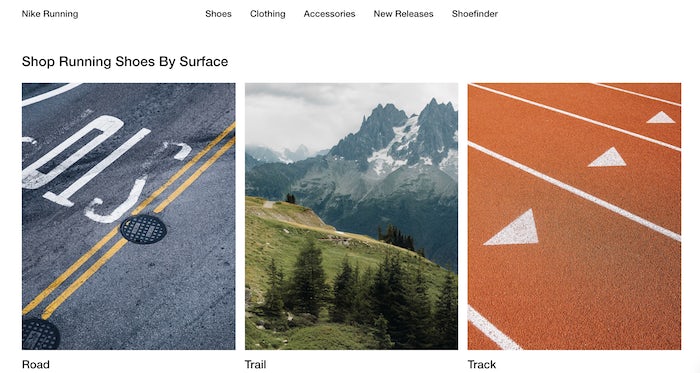 Shop by surface, all about performance. Image via Nike.com

I have been going a bit off topic but am trying to show that Nike’s digital services, though partly being responsible for operating expenses that rose 9% to $2.44 billion in second quarter to November 30th last year, are starting to make for a different proposition. This is most evident when you consider the Nike Membership Plus scheme, which gives members access to exclusive products, events, guidance and training plans, and the Run Club app (which can link to Apple Watch, and the eagle-eyed may have seen a little promo for in the Alphafly ‘stay tuned’ screenshot shown earlier), and even an AR shoe-sizer in app.

Personalisation is critical to Nike’s D2C efforts and these services are a big part of that data grab. This data grab explains why Nike pulled back from selling on Amazon last year, in order to focus on creating “more direct, personal relationships” with customers.

But stores still do something for me

So, not only do I enjoy the Nike marketing (which even Alberto Salazar can’t dent) and want (but can’t have) the shoe, I also want to experience the services wrapped around the shoe. Nike is therefore close to having that platform-like feel you get from Apple by owning the computer and the phone and visiting the store.

That’s where there is potentially one issue for me, a lack of stores. Nike has a great in-store experience – the new Nike Live stores feature all sorts of multichannel goodness using the app, with President of Nike Direct Heidi O’Neill even telling Fortune, “I see the role of the store as an extension of the mobile experience.” But I live in Manchester, England, and we don’t have a Nike store – there’s a Nike factory store in an outlet to the North, but no Nike brand store. Where am I going to get my gait analysed?

Nike operates only 30 Nike brand stores in the US and 57 internationally.

Of course, it’s silly to think direct-to-consumer efforts will mean Nike brand stores springing up in every regional city in the UK – they earn their worth in marquee locations like Oxford Circus.

As O’Neil says, stores are merely an ‘extension of mobile’, and so I think that’s a good note to end on. As much as I admire Nike and the brand’s DTC push, there is obviously always going to be a need for wholesale, especially when I want to try something on (the very idea!) or buy a birthday present last minute. For those occasions, JD Sports or Foot Locker will have to do and Nike will have to go without my data.

But first, where’s that couch?

Shopping is a multi-sensory experience. In this regard, the ‘real world’ trumps ecommerce. 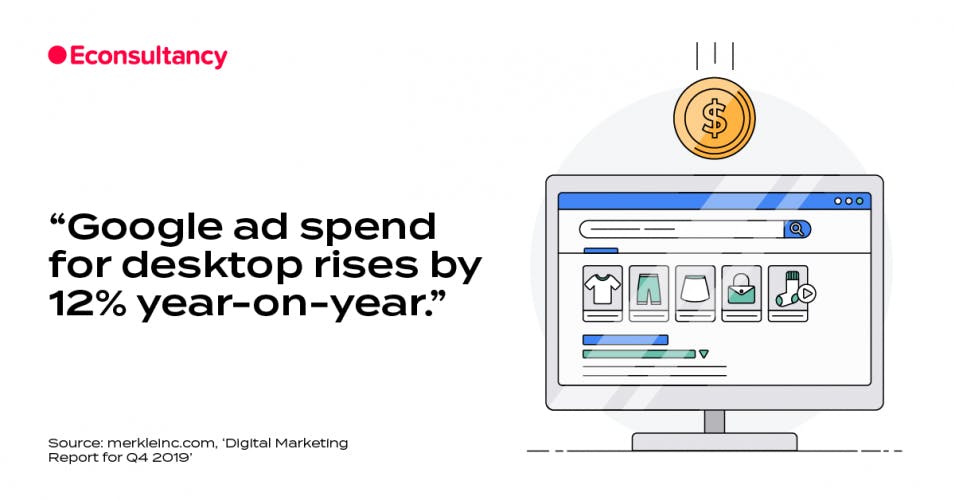 We’re moving on into February with another great round-up of digital marketing statistics for your Friday afternoon. 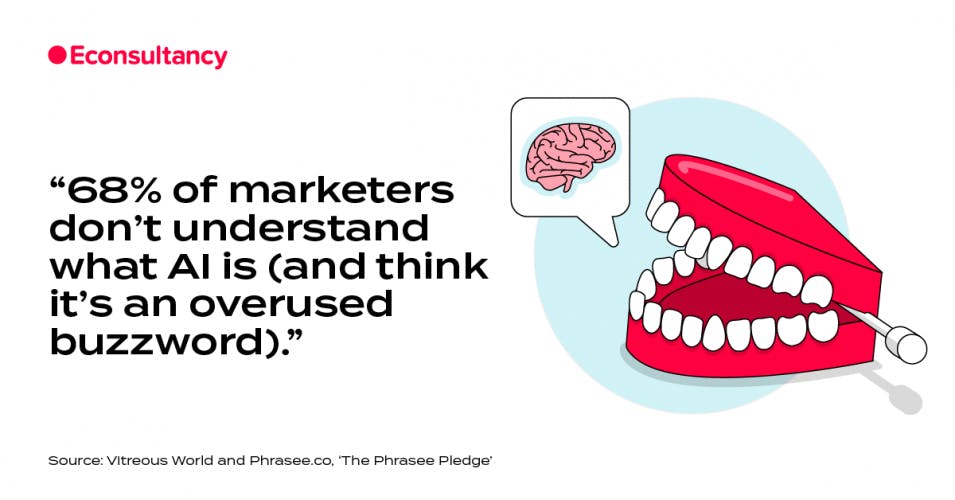