1) I don’t necessarily agree that there’s such a thing as a ‘social media industry’ as it forms a part of a different service (for example, public relations and social media or advertising and social media) but as it stands today, businesses are still buying social media, so where there’s a demand.

2) the thoughts below are beta. There, caveats done, now I can say anything I want ;-). Oh, and please excuse the graphs.

Wikipedia gives a pretty solid 101 on the methodology;

“Porter’s Five Forces is a framework for industry analysis and business strategy development formed by Michael E. Porter of Harvard Business School in 1979. It draws upon Industrial Organization (IO) economics to derive five forces that determine the competitive intensity and therefore attractiveness of a market. Attractiveness in this context refers to the overall industry profitability.

An “unattractive” industry is one in which the combination of these five forces acts to drive down overall profitability. A very unattractive industry would be one approaching “pure competition”, in which available profits for all firms are driven down to zero.”

Now that the social media industry is about ten years old, it’s becoming more interesting to look at how it’s going to develop as a mature industry, because it’s beginning to stabilise and there’s a healthy understanding of product/service across the board.

For those of you that have forgotten A-Level Business Studies, below is Porter’s Five Forces diagram (albeit a little more colourful than the original). 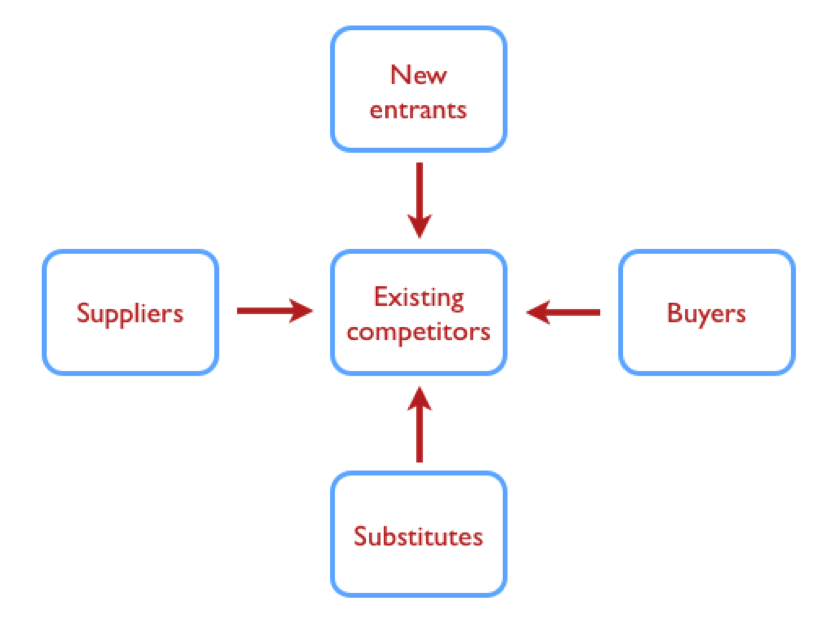 However, a lack of experienced talent, little economies of scale (in the majority of models) and a reduction in client budgets and risk-taking mean that it’s a mixed bag for new entrants into the industry.

Substitutes is fairly self-explanatory. Is your business easily substitutable? Could someone else do it better, cheaper or faster? And if so, why? At this point, he also discusses the price / performance trade-off, something that becomes interesting when applied to the social media industry. 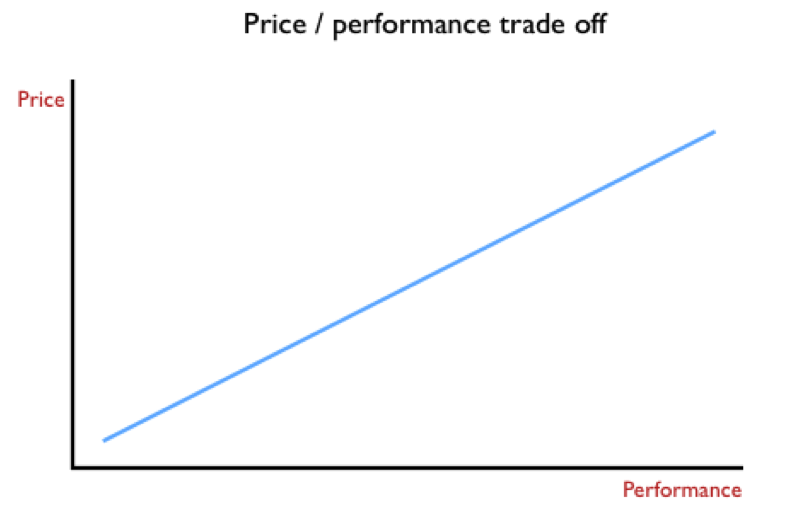 The original graph suggests that clients are willing to sacrifice performance for a lower price, or increase performance for a higher price. I think we can take this graph a little further as the social media industry is governed by a skills and experience issue – making the trade-off a little more complex.

Below I’ve added brackets to the graph to demonstrate the difference in agency type/skill/business position.

It’s a simple addition to the diagram, and it’s easy to plot agencies on here. You have the commoditised social media agency (churning out work such as Facebook page management), the mid-level agency providing engaging content and qualitative and quantitative research for a higher return (in both senses) and then the strategic consultancy providing top-down social business advice (and linking social to business objectives and savings/sales).

What I find most interesting about the price / performance trade off is the idea (currently under-researched idea) that the price increase isn’t directly matched by the performance increase, so where Pr 1 = Pe 1, Pr 2 = Pe 1².

Basically doubling the budget (in my experience) is more likely to triple to output. My theory is that as an agency receives more investment from a client, that client in turn receives more emotional and psychological investment from the agency – creating an exponential growth curve for the price / performance trade-off.

Porter would argue that here we see that substitute businesses are a bigger threat because they promise a significant improvement in performance or price. This is where I think the social media industry is going to mature further.

We currently have a whole host of business operating in the two lowest price brackets, but as clients become increasingly understanding of the potential impact of social media, we’ll see agencies spreading out over all three brackets.

The buyers (clients) are becoming better educated and more experienced with social media. Certain businesses are taking building skills in-house and upskilling staff, while other businesses are creating much tighter briefs and giving more consideration to what type of agency they feel will provide the most effective work.

Buyers also have a significant amount of control as the industry is currently pretty bloated and most agencies would rather compete on price than on performance (again, in my experience) – allowing buyers to barter. There is the added complication of buyers looking to amalgamate social media into existing budgets (volume discount, again, lead by price and not necessarily performance) as well as the perception that it’s easy to switch social media agency (a conflict between short-term and long-term views of social media, for another post).

The opportunity for the industry will come when it matures and agencies spread across the three price/performance brackets previously mentioned. The industry will become healthier (with fewer agencies, but with a great market value) because the buyer will have a multitude of choice and the trade-off will focus on joint axis, rather than the singularity of price.

Speaking with two excellent old colleagues recently, I explained that there are about 1,000 people in the UK social media industry that actually do work and another 10,000 that talk about the work that the 1,000 do.

Supply is an issue and it faces the same bottleneck that agencies face – those that are experienced provide clients with confidence, so are given work, those without experience present a greater risk (in an industry that is already perceived as risky), so experience becomes exponential, while inexperience struggles (also creating a supply/demand vs price situation).

Throw into this predicament the melding pot of backgrounds (digital, public relations, advertising) and suppliers become difficult to assess. As the industry develops and stabilises, I think we’ll see more time invested in developing staff (because we’ll have more senior people who can do the job too), which will hopefully create a virtuous circle.

There’s a large pool of agencies in the social media industry (to the point where it’s bloated) and severe price undercutting is endemic – but this seems to be characteristic of an industry still maturing. I believe that in the next twelve months we’ll see a fall in the volume of agencies (see Hugo Hopenhayn’s The Shakeout), but a rise in market value as agencies begin to compete on performance as well as price.

It’s a great (but scary) time to be in the social media industry, so fasten your seatbelt.

Television programming has always been a popular subject for water cooler conversations at work, so it doesn’t take too much imagination to think that social media and television are a match made in heaven.

But according to a survey conducted by online television hub SideReel, expectations about social media and television may be a little bit too high.

Facebook may or may not have some tough competition in the not-too-distant future, but right now, Facebook is at the top of many brands’ lists when it comes to digital marketing initiatives.

Increasingly, that’s proving to be a double-edged sword.