Last week, we covered detail from the report which highlighted how India appears to be racing ahead of other sub-regions. Today we’re taking a look at to what extent B2B firms in Australia and New Zealand (ANZ) are adopting and profiting from ecommerce in 2018.

Overall, the report reveals that ANZ marketers are somewhat behind their regional counterparts, why that might be and how B2B marketers in ANZ are developing their ecommerce strategy.

The first point to note from the report is that B2B firms in ANZ are trailing behind other companies in the region with regards to ecommerce. When asked whether their company already had a transactional website, nearly one in three said they were still in the planning stage. (NB B2B marketers with no plans for ecommerce were not included in the survey.) 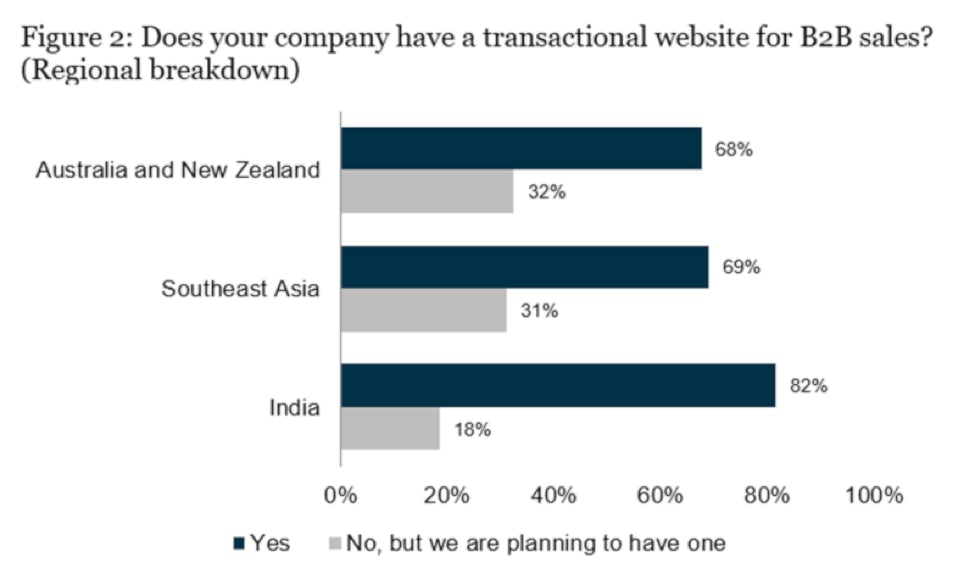 The percentage of ANZ B2B companies which do not yet have transaction capabilities (32%) was similar to those in Southeast Asia (31%), but significantly greater than the percentage of B2B firms in India who are not yet transacting online.

Additionally, when respondents indicated the percentage of revenues generated directly through ecommerce, B2B marketers in ANZ reported the lowest number (38%), behind Southeast Asia (39%) and India (44%).

While these numbers are all relatively close, directionally the responses may indicate that, for B2B ecommerce, companies in ANZ are slightly behind others in the region.

Why? Lack of support from management

Determining why ANZ B2B firms are behind other firms in the region is tricky. There are likely to be many reasons why ecommerce has not yet been adopted as wholeheartedly there as in other sub-regions, but the report points out several contributing factors.

First off, when asked to agree with the statement ‘our organisation is committed to investment in the B2B ecommerce experience’, fewer B2B marketers in ANZ said it was so (70%) compared with those in Southeast Asia (75%) and India (93%). Furthermore, fewer ANZ marketers felt that their businesses understood the indirect impact of digital channels on overall sales than their regional counterparts.

When describing the single greatest challenge they faced when developing their ecommerce capabilities, B2B marketers in ANZ again pointed to management. While they were most likely to say that the ‘complexity of the business was the problem’, more B2B marketers in ANZ said that the ‘lack of boardroom buy-in to provide investment’ was their greatest challenge (11%) than their counterparts in Southeast Asia (7%) or India (3%). 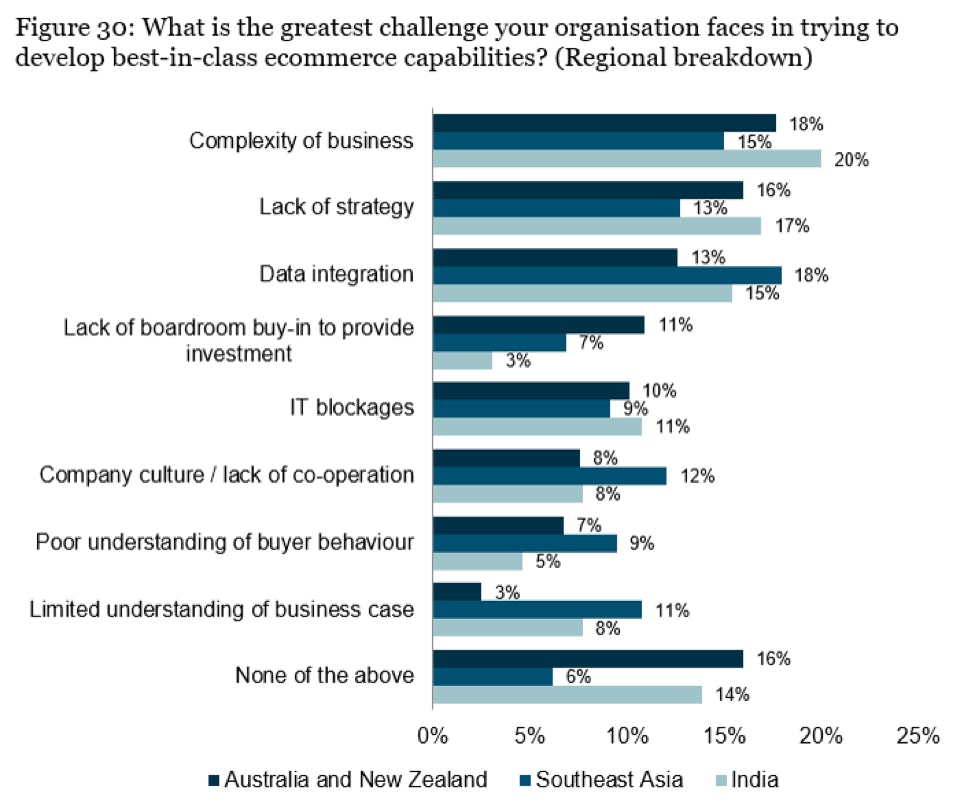 This difference is another sign that ANZ B2B marketers are facing greater corporate headwinds when trying to move to ecommerce than others in the Asia-Pacific region.

The result: Falling behind

Perhaps the most startling statistic from the report regarding B2B firms in ANZ is that their digital customer experience (CX) is significantly behind other companies in the region. 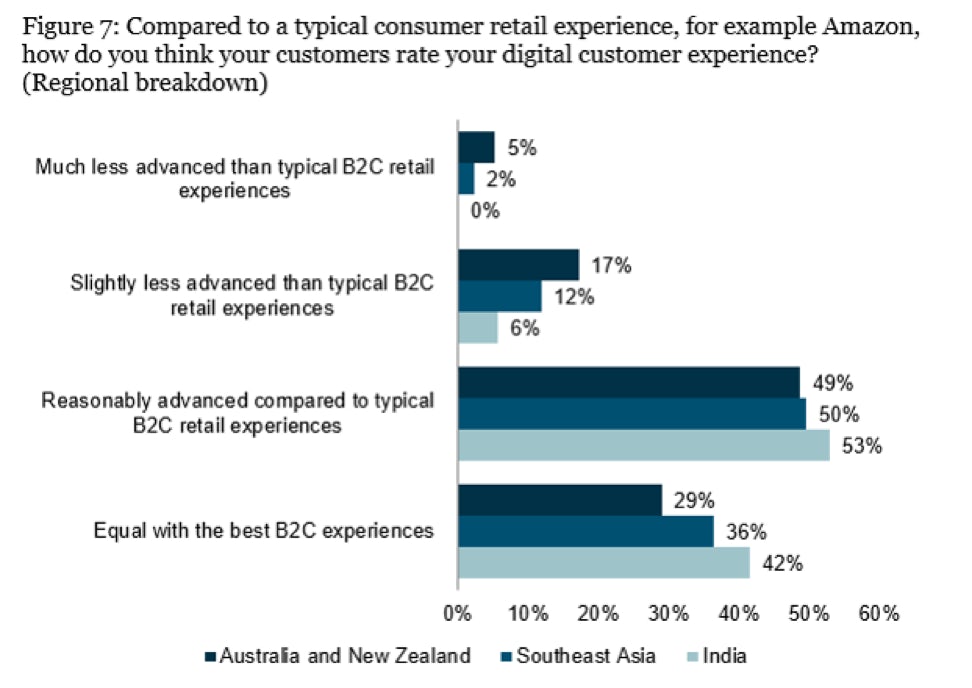 As B2B consumers are also B2C consumers, this sentiment should concern all ANZ B2B firms whose marketers feel this way and perhaps reconsider the level of support and investment in the technology.

Looking toward the future

Despite the apparent setbacks, it was not all doom and gloom for ANZ B2B marketers. They were the most likely sub-region surveyed to indicate that their ‘processes and workflows’ were ‘good’ and more than half (51%, not shown here) said that their companies will be investing more in B2B ecommerce technology in the next 12 months. 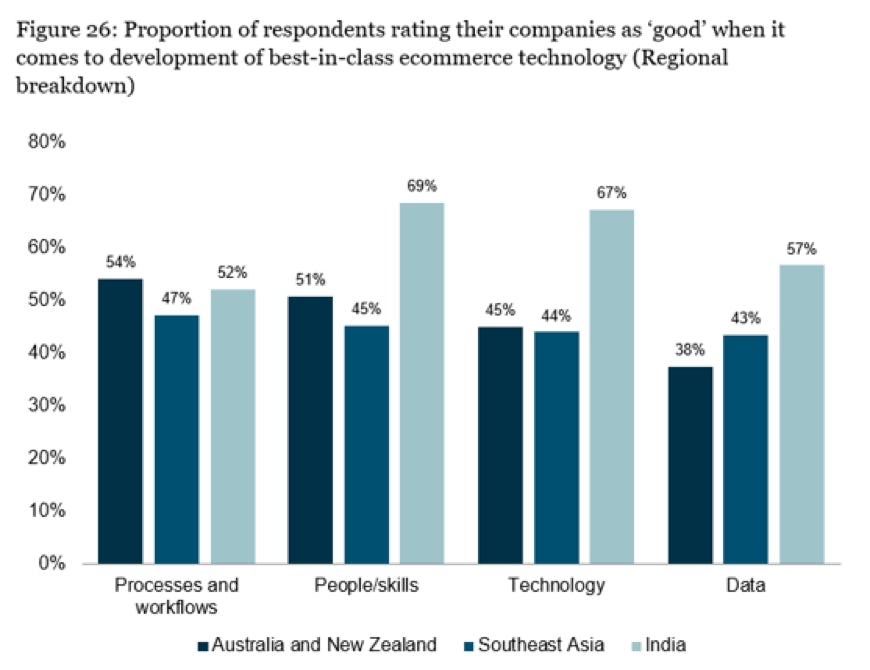 Finally, ANZ respondents also seemed quite excited about the prospects for adopting AI/machine learning to help with their B2B plans (24%), so they are certainly interested in improving ecommerce capabilities in the near future. 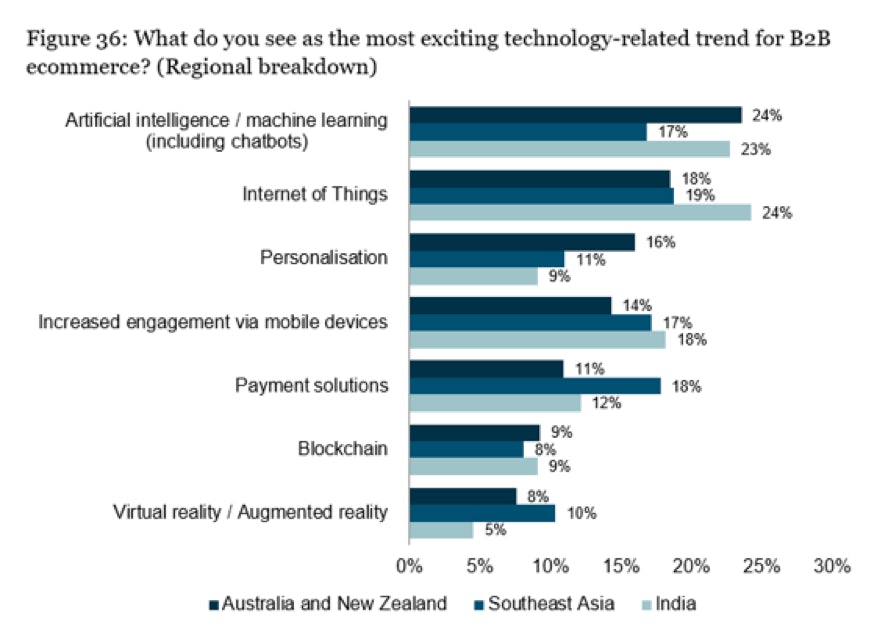 Please download and read the report for more detail on these and other interesting points on the state of B2B ecommerce in ANZ, Southeast Asia and India. 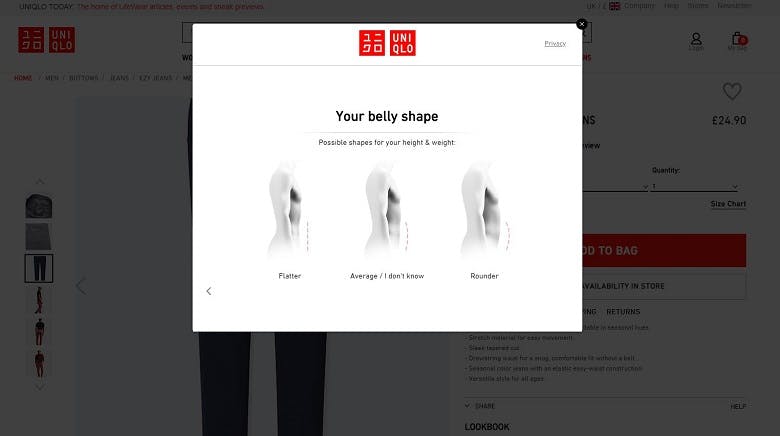 In March this year, H&M came under fire when a disgruntled shopper brought to light issues about the store’s sizing policy. Rebecca Parker is a standard UK size 14, and yet she couldn’t pull a pair of size 14 jeans over one thigh. 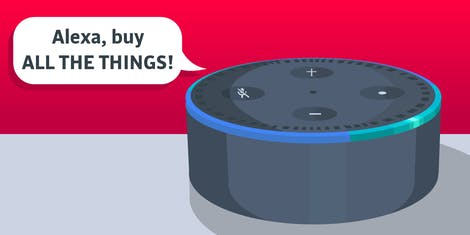 12 months ago voice search was the future. Then it wasn’t. Then it was again. Now it appears it’s all hype. I’m struggling to keep up! The latest “voice is over-hyped” claim came in the form of underwhelming stats about the number of commerce-related queries that are being performed on a voice-enabled device. A rather dismal 2% of people who own Amazon Alexa devices have used them to make a voice purchase, according to Amazon’s own data.