This month, we look at some recent movements in Chinese ecommerce, including the withdrawal of Amazon from China, and the results from JD.com’s massive 618 holiday sale.

Plus, ad fraud remains a major problem in China, as exemplified by the recent ‘RedEye’ ad fraud operation; and tech giants Tencent and Bytedance are preparing to go toe-to-toe in the gaming sector.

You might be accustomed to reading about the successes of Chinese ecommerce companies and of how the Chinese ecommerce market is hitting new records every other quarter. But it seems that its luster may be fading just ever so slightly – JD.com and Amazon have recently registered significant setbacks.

JD.com is pulling out of Australia after establishing an office in Melbourne in February 2018 to great fanfare. JD.com said that it would continue to work with its current Australian and New Zealand partners including Austrade (the Australian Trade and Investment Commission) and Australia Post, but that its operations would be overseen by its offices in China. JD.com intended to invest in a distribution network across Australia but it appears that JD.com is consolidating resources amidst plans to invest in talent in 2019.

Amazon China also announced that it would cease operations of its Amazon.cn marketplace on 18 July. Its other services, including Amazon Web Services and Kindle stores, will continue. Amazon has moved remarkably slowly in China – it entered China through the acquisition of Joyo.com in 2004, a Chinese online shopping website in 2004. Since then, it has transformed Joyo.com into Amazon.cn but has not made strides for market share against JD.com, Taobao, Tmall or other large Chinese ecommerce sites.

These moves hint at a subtle change in strategy in these ecommerce businesses. A refocus on the non-retail aspects, particularly logistics and other backend services, suggest a long(er)-term strategy may be at work here. This would fit in with Amazon’s playbook – its now-ubiquitous Amazon Web Services was once perceived to be a distraction from its core business of ecommerce – and JD.com may be taking a page from that same book.

More on retail in China

JD.com’s 618 holiday sale was huge – but brands should consider smaller holidays and festivals

JD.com marked its 11th anniversary with its signature “618” holiday sale that ran from 1st-18th June. In the first hour of the sale on 1 June, the following were snapped up, as reported by the JD.com Twitter account:

…while on 18th June itself, the retailer sold: 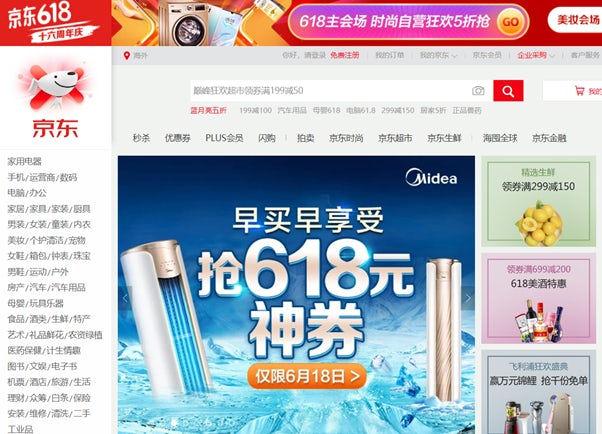 A screenshot of JD.com on the final day of the 618 holiday sale, 18th June

This year’s 618 sale is unique in that JD.com partnered with three of China’s most popular social media platforms: Douyin, Kuaishou and Weibo. Douyin has its own shopping cart and is integrated with JD.com’s platform, while Kuaishou has its own dedicated store on JD.com that users can sell on. Weibo, a micro-blogging app, allows users to make purchases directly within its app via Weibo Window. These collaborations open JD.com up to younger social media users in second- and third-tier cities.

The potential for success during these shopping festivals is obvious. However, it may be time to look away from these enormous events, particularly for smaller brands. While it seems that new records are established during every shopping festival, not every brand is awarded an equal share of the spoils. Smaller brands – and marketers working in less rarefied strata – should consider capitalizing on other lesser-known holidays in China. These include:

No matter the holiday or festival, marketers must be aware of the cultural impact and societal trends du jour, lest their marketing efforts backfire à la Burberry.

AdBug, a Chinese ad intelligence and verification company, uncovered an ad fraud operation in China called RedEye. RedEye allegedly cost brands around US$3m a day (RMB 20m) in terms of revenue, but the fallout in terms of brand safety is likely to be far higher. It has also been touted as one of the largest ad fraud networks ever discovered. Major international brands, including L’Oreal, Oreo, Wyeth, and Ford (a full list is available on AdBug’s website), had their ads displayed on websites containing adult, extreme or violent content.

This follows a report from Miaozhen Systems that estimated a third of all ad traffic in China was fraudulent, as we covered in last month’s round-up of the major marketing stories in China.

The effects of fraudulent ad traffic seem to be taking root. Sun Zhonghuai, chief executive of Tencent’s video streaming business, recently warned that while the company had around 89m users in March 2019, he expected growth of ad sales on Chinese video platforms to drop from 37% to 19%.

All is not doom and gloom, however. TikTok is starting to have influencers of its own who create viral content, and its US arm is taking notice of it. MAV Beauty Brands noticed that some products in its “Strictly Curls” showed a significant increase in sales. They discovered that the products had gone viral through TikTok videos.

Similarly, Chipotle launched a campaign with an influencer who did not have a large TikTok presence. The six-day campaign, #ChipotleLidFlip, drew 110,000 video submissions with 104m video starts – as of 6 June, the hashtag had 230m views.

The near future may see more attempts to engineer viral content within apps that immediately engage their users – such as TikTok – rather than Instagram, where the focus is typically to scroll through content relatively quickly.

Everything you need to know about TikTok

Bytedance enters the gaming sector, making gaming the next battleground

Gaming has recently become the latest battleground between two internet giants, Tencent and Bytedance. Without any apparent fear of being seeing as overly litigious, Tencent sued a user who livestreamed a session of “League of Legends”, a wildly popular game developed by Tencent, with around 120 million players worldwide. League of Legends’ 2018 World Championships drew in a record-breaking 205m concurrent viewers at its peak – which may explain why Tencent is twitchy about others livestreaming the game.

Tencent claimed that the user, a 25 year-old, violated its user agreement by “recording, livestreaming and disseminating content from Tencent’s games without its consent” over Bytedance’s Xigua Video. Xigua Video is a short-form video platform hosting video clips between two and five minutes in length. Tencent demanded that he cease all livestreaming and to pay damages of RMB 1. (That’s right – RMB 1.)

This is just Tencent’s latest move to cement its hold on the gaming industry in China. Bytedance has made overtures to enter the gaming industry, acquiring a Chinese mobile game developer, Mokun Technologies, in March. Mokun developed a mobile game in based on the Chinese literary classic Romance of the Three Kingdoms, which was published by Tencent. In February 2019, Bytedance also released a game called “Music Jumping Ball” within Douyin, the Chinese version of TikTok.

In the larger scheme of things, games are increasingly viewed to be their own social platform. A June study by the National Research Group entitled ‘Fortnite: The New Social Media?‘ carried out wide-ranging research into first-person shooter game Fortnite. It found that the game takes up 21% of 10-17-year-olds’ (its main audience) free time, higher than social media – which takes up 14% – gaming (outside of Fortnite) – which takes up 16% – and streaming content, which also takes up 16%.

Players say the game “lets me be my authentic self”, “connects me to what everyone is talking about” and “makes me feel like I’m part of a community” – objectives that any social media platform aspires towards.

On this front, both Bytedance and Tencent are working towards establishing functions within their apps (TikTok/Douyin and WeChat respectively) that blend the competitive yet collaborative, thereby building a community where users are comfortable with self-expression. Bytedance and Mokun have not announced any new games, but the upcoming face-off will be something to watch closely.

For more information about Econsultancy’s research, training and best practice solutions in the Asia-Pacific region, contact us on apac@econsultancy.com.

Advertisers today are starting to look towards technologies such as virtual and augmented reality (VR and AR) as a way of getting closer to their customers and delivering those all-important immersive experiences. 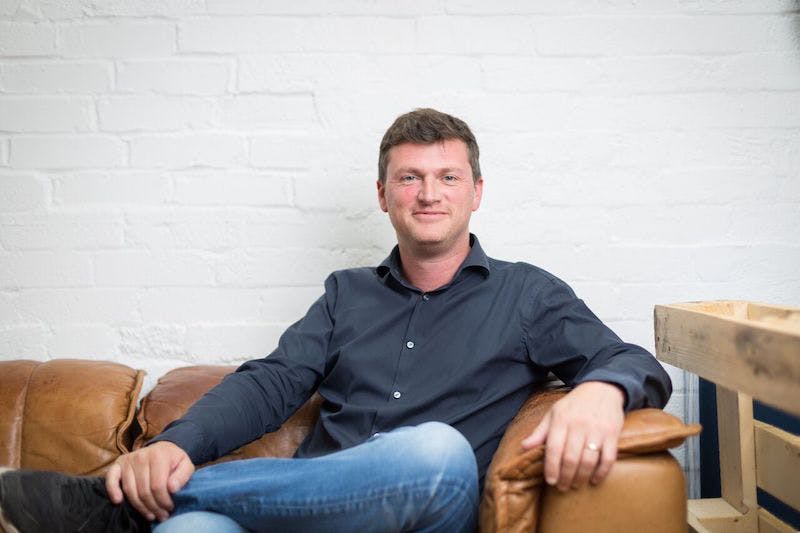 In marketing we’ve been all in a froth about mixed reality for some time. But as consumers spend ever more time on mobile devices that are increasingly sophisticated, tech companies are offering brands new ways to exploit the confluence of the real world and the smartphone. Seth Jackson is CEO at Landmrk, one of those […]

Let’s dive into this week’s stats.