The search engine, called Toutiao Search, primarily draws its results from ByteDance’s own apps such as Douyin and Jinri Toutiao, one of China’s largest mobile content creation and news platforms, but also pulls in general search results from around the web. ByteDance first began tests for a more general search engine in March when it updated Jinri Toutiao’s internal search function to surface external content, before fully rolling out Toutiao Search in August.

On the face of it, this seems like huge news: an up-and-coming tech challenger (founded in 2012, ByteDance was last year declared the world’s largest internet startup after a major funding round) has moved to challenge an established internet veteran (Baidu was founded in 2000, and currently holds a 76% share of the search engine market in China). ByteDance is mobile-first and owns a slew of popular apps; Baidu is experiencing stagnating market valuation and increasingly seems like a relic of the desktop era.

It’s a classic battle of old versus new, David versus Goliath. No other search engine comes close to threatening Baidu’s dominance – its closest rivals, Sogou and Shenma, hold 11% and 5% market share respectively, according to Global Stats – and hasn’t for years. But Toutiao Search seems like it might be the candidate to unseat Baidu.

However, a bigger question arising from the news is: does search in China really matter in 2019? This was the question posed by Abacus News last week as it posited that the real obstacle to ByteDance’s search ambitions might not be Baidu, but China’s siloed app landscape, which makes web search largely redundant. As if to confirm this notion, the news came last week that Baidu has fallen out of the top five most valuable publicly traded Chinese internet companies, having experienced a 40% slide in its share price so far this year.

Is Baidu struggling against the inevitable by trying to maintain its dominance in a changing internet landscape? And will a new rival in the form of Toutiao Search be the final nail in its coffin, or will ByteDance’s search engine inevitably suffer the same fate as Baidu? 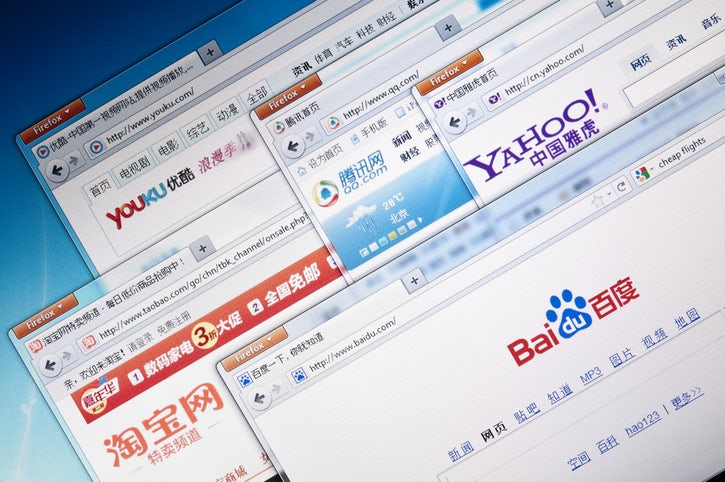 Does search still matter in China in 2019?

The decline of web search in China

Most of the people reading this blog, if you keep tabs on technology news or China in any way, will know that the digital landscape in China is quite different to that of the west. China is mobile-first and app-oriented, and the overwhelming majority of online interactions take place within the walled garden of one of China’s super-apps, of which the biggest and most prevalent is WeChat.

What we don’t often think about is what this landscape means for internet mainstays that we take for granted in the west, like search. Google is an undisputed titan of the western tech world, and though nowadays it is much more than just a search engine, it still derives most of its revenue from search advertising, which pulled in $32.6 billion in Q2 of 2019. This is lucrative precisely because search is still huge in the west.

By comparison, although Baidu is still one of China’s dominant advertising players alongside Alibaba and Tencent, its digital ad revenues have been sliding, declining from 17.3% of the digital ad market in 2017 to 15.4% in 2019. Part of this is due to Baidu intentionally shifting its focus away from search advertising towards AI, but that hasn’t been enough to sustain the company’s revenue, as evidenced by its falling share price. Its share of the search market is commanding – but search alone is no longer enough to keep Baidu on its throne as one of China’s top tech companies.

This is because online content in China tends to be siloed within different apps or super-apps, instead of being indexed by search engines. If a user in China wants to access a service – say, an ecommerce website – chances are high that it already exists as a mini-program within WeChat’s ecosystem, of which there are more than one million. If they want to read the news, WeChat has that covered: its parent company Tencent has a news service, Tencent News, which is integrated within WeChat and will appear when users search for keywords within WeChat, even if they don’t have the app installed. Or, they can use ByteDance’s Jinri Toutiao, Hong Kong-based Ifeng News, or any one of a number of other content apps – none of which requires going through a search engine.

Super-apps: How the rest of the world is following in China’s footsteps

It could be argued that Baidu hasn’t helped its own cause, either: its reputation has seriously declined in recent years as Chinese searchers complain of disproportionate amounts of ads on Baidu (which can often be fake) and excessive preference given to news articles from Baijiahao, Baidu’s content platform, which are reportedly often low-quality or fake. It’s difficult to say whether this increasingly poor search experience is contributing to the shift away from web search in China, or simply a result of it, but either way, it doesn’t make Chinese users any more inclined to use Baidu.

Other search companies aren’t faring much better, with Sogou seeing a 55% drop in its share price over the past year, indicating that the problem isn’t just with Baidu. Of course, this then begs the question: why has ByteDance decided to enter the search engine market now of all times, and is the move going to do it any good?

The case for a ByteDance search engine

The problem with the current situation is that although China’s internet landscape has developed in a way that makes a single, unifying search portal impractical, that doesn’t mean there isn’t a need for one. The article by Abacus News about the launch of Bytedance’s search engine paints a grim picture of the search experience in China. When an article proclaiming the “death” of Baidu went viral on WeChat in January, one user commented on it, “Now when I search for things, I need to search on Baidu, and then search again on WeChat and Weibo, and once again on Zhihu, and then half a day passed.”

“On Baidu, you can’t get search results from WeChat public accounts,” Wei wrote in his post. “Even indexing Weibo content is very difficult.” He went on to point out that reviews on major travel websites like Ctrip, and short videos on Douyin, are also very rarely found on Baidu.

Against this backdrop, adding yet another search portal to the mix in the form of Toutiao Search seems unlikely to improve things for Chinese netizens. But there are a few signs that ByteDance might be able to set Toutiao Search apart from other Chinese search engines in a positive way.

ByteDance has risen to the heights that it currently enjoys in such a short space of time because it does a few things really well. One of those is AI-driven content curation. Jinri Toutiao, ByteDance’s news and content platform, uses machine learning algorithms to understand its users’ preferences and personalise their content feed, surfacing the most relevant news, entertainment and other articles. This approach has driven Jinri Toutiao’s immense popularity, with 120 million daily active users reportedly spending an average of 73 minutes on the app every day.

ByteDance’s short video app Douyin employs similar techniques, presenting its users with a personalised content feed in a tab labelled “For You”. This feed, combined with endless scrolling, has proven to be so addictive that Douyin’s creators were forced to add a warning pop-up that appears after 90 consecutive minutes spent viewing videos.

It’s easy to imagine ByteDance bringing this personalisation expertise to bear on its search engine, creating a Google-esque tailored search experience for each user. The Toutiao Search interface has already drawn comparisons to Google for its minimalistic appearance, and ByteDance is known to have hired technical experts with backgrounds at Google, as well as Bing and Baidu, to work on the project. Given the level of user discontent that currently surrounds Baidu’s search experience, this seems like an obvious area for Toutiao Search to distinguish itself. 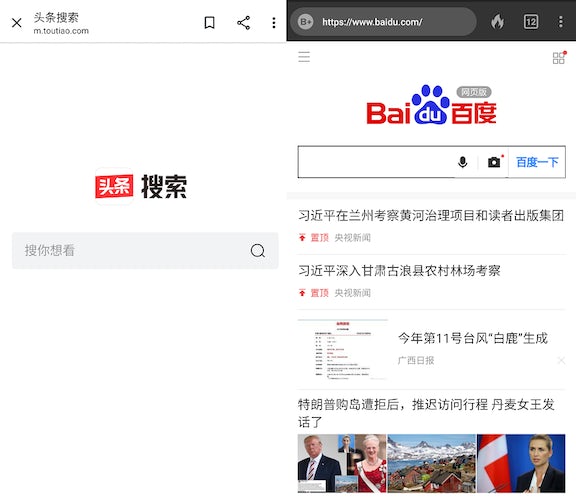 A study in contrasts: The Toutiao Search interface, which has drawn comparisons to Google for its minimalistic design, is a far cry from Baidu’s busy homepage

A short piece by Tech Node which appeared when ByteDance began testing its search engine back in March highlighted another asset that ByteDance can bring to bear on search: user data. Thanks to Jinri Toutiao, Douyin and other properties like news aggregation apps TopBuzz and News Republic, ByteDance already has a wealth of data about users’ content browsing habits that it can call upon, data that a rival like Baidu would have needed years to build up. It can use this data in combination with its AI expertise to surface the most relevant search results for users.

ByteDance and its properties are also popular with a very different generation of internet users to those who would have grown up using Baidu to search for information online. Jinri Toutiao is noted for having succeeded at engaging a younger generation with news and current events; ByteDance’s short video apps like Douyin and Xigua Video are also popular with younger users.

Mobile-first Toutiao Search, therefore, could become the go-to search engine for the younger generation. Again, this stands it in good stead to compete with Baidu and forge a better reputation for search in China.

Toutiao Search won’t be the answer to every problem ailing search in China, of course. It still can’t solve the problem of China’s siloed internet content, and judging from past clashes between ByteDance and Weibo, and ByteDance and Tencent, we’re unlikely to see any kind of deal that will bring content from Weibo or WeChat to Toutiao Search.

But while it wouldn’t be accurate to call Toutiao Search a game-changer for search in China, it does seem like a viable contender and one that has the potential to make significant headway in China’s search market. If Toutiao Search can achieve the same kind of success in its vertical as apps like Jinri Toutiao and Douyin, it will be interesting to see what impact it has on how Chinese users interact with and perceive search going forward.