Remember when Yahoo bought Summly for $30m in March? Well, now it has unveiled News Digest, a major part of its new media department.

The service is in the business of curating ‘atoms’, the most important bits of content on particular subjects. As Nick D’Aloisio, Founder of Summly, put it:

Atoms assembled from around the web include articles, maps, infographics, Wikipedia extracts, videos, photos and more.

With Google and Microsoft absent from CES this year, Yahoo has managed to create quite a buzz.

It’s actually a relaunch of a service already available to Sony Playstation users, but significantly Sony have rebranded it as an ecosystem available across their devices.

To that end, the service is set to launch for other Sony hardware, too, such as Bravia televisions and tablets and smartphones. This could put Sony in a stronger position in a number of markets, making them seem more than just a hardware company.

Being able to play Playstation games on a Sony tablet, providing it works well, is a step forward.

Intel showcased processors that will let devices such as Asus’s tablet/laptop hybrid run both Windows and Android OSs.

More devices are set to follow, allowing users to access the Android app ecosystem and use that oft-important-for-business Microsoft software.

Although the home is a big part of CES 2014, with many new IoT devices, such as smartphone activated door locks being showcased, the world of wearables seems to be even bigger this year.

The Sony SmartBand and LifeLog

This is Sony trying to take wearables one step further; a device that creates a sort of diary or timeline of your day. The LifeLog app will automatically collate photographs, events, your travels etc.

Okay, this is just a smarter version of the Pebble smartwatch, but I think it’s significant as wearables are beginning to integrate.

Making wearables desirable and not just bits of tech stuck on your body will be an important part of increasing adoption.

Intel launched ‘a make it wearable’ intiative with a prize fund of $1.3m. Intel also showed the first of its devices, an earpiece and a smartwatch.

The need for security is still spawning new consumer tech. eyeLock is a USB iris scanner guaranteed to be more secure than ‘P4ssw0rd’.

As Mashable succinctly puts it:

Three-dimensional printing is a transformative technology, but the future of easily replicated objects is difficult to imagine when the only thing you see printed in demonstrations is tiny figurines.

To that end, the Makerbot is a large scale 3D printer that might be about to push the industry on a little bit.

Maybe, looking back at CES 2014, some of these developments will seem as naff as this image but who knows? 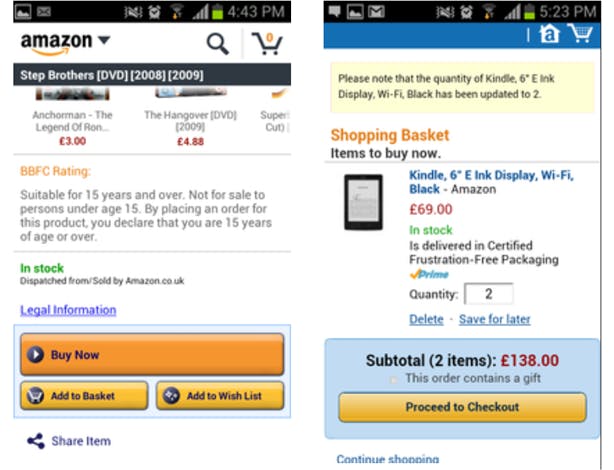 As mobile devices are becoming more accessible to a wider demographic of consumers and as mobile shoppers are becoming more confident, we’re seeing steady growth in the amount of people making purchases on their smartphones and tablets.

However, conversion rates lag behind those on other devices, and the checkout can be one of the biggest barriers to mobile commerce.