If you’re a marketer in fashion retail, of course, you’ll already be aware of this. But you might be surprised by the extent to which it can affect not just sales, but organic search demand and the visibility of your brand.

Recent research into the fashion sector by search analytics platform Pi Datametrics has revealed that temperature changes in both summer and winter have a substantial impact on the search volumes for different types of clothing – one which has the potential to significantly disrupt prediction models, in ways that would otherwise be difficult for digital teams to explain.

This can either be a big boost to revenues or a source of unexpected losses, depending on whether or not retailers are prepared for the changes and in a position to react to them.

In this article, I’ll analyse the data from Pi Datametrics on exactly how and why weather affects search volume in the fashion retail sector, and give some practical tips that marketers can use to make sure they’re prepared – whatever the weather.

The impact of weather on search demand: Summer clothing

This was measured with Pi’s own Organic Value Score, which averages out metrics critical to conversion (such as AdWords data) to determine which searches are most likely to convert.

Things warmed back up in May and June, with temperatures reaching a full degree above average. July and August were also warmer than average, but only fractionally – 0.3 degrees above normal. 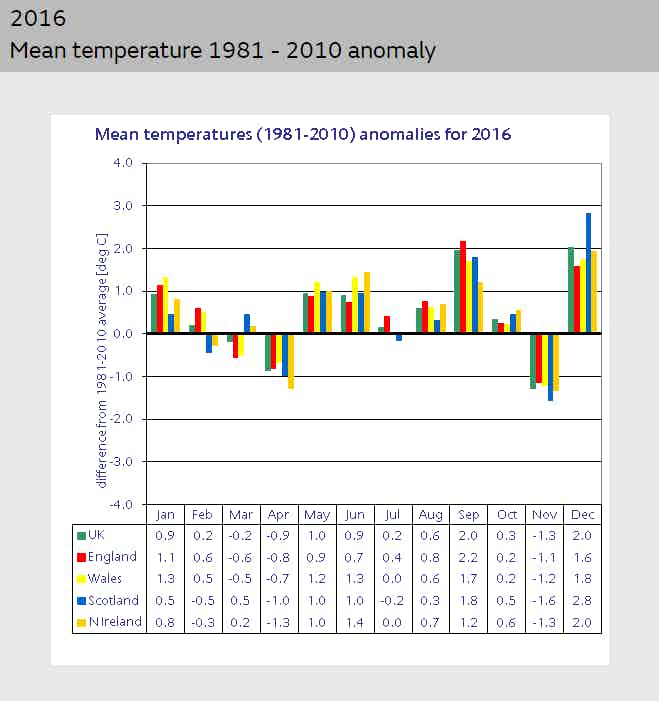 Meanwhile, in 2017, the whole first half of the year was warmer than average, with temperatures in January to June a notable 1.3 degrees above average.

This then led into a cooler late summer/early autumn period, with temperatures 0.2 degrees below average. 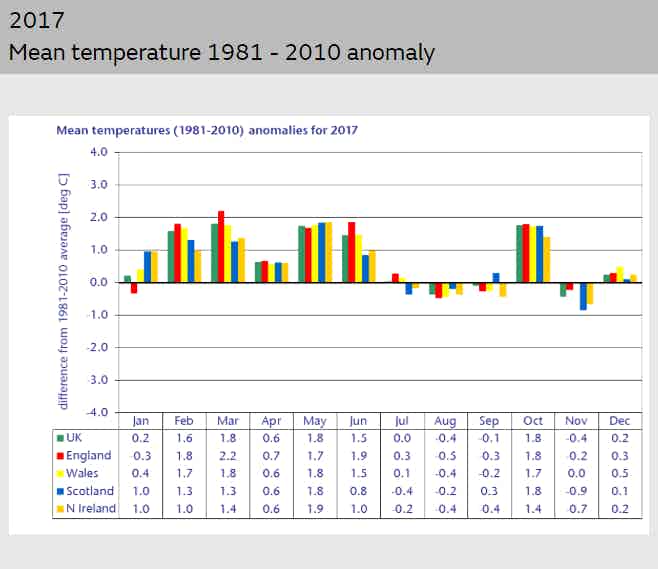 How did these fluctuations in temperature affect retail demand?

The organic search value of men’s summer clothing – shirts, flip-flops, T-shirts, sunglasses and shorts – peaked in line with temperatures, climbing during the warmer weather in May before plateauing or tailing off in June (as presumably searchers were well-outfitted for summer clothing by then).

It then climbed back up during the renewed period of warmth in July, before tailing off again in August.

What’s more remarkable is the sizeable and sustained impact that the higher temperatures in the first half of 2017 had on demand for summer clothing.

Pi Datametrics compared search trend data for men’s summer clothing throughout 2017 with data from 2014, 2015 and 2016, and found that search value for summer clothing peaked significantly higher and earlier in 2017 than in the preceding three years. 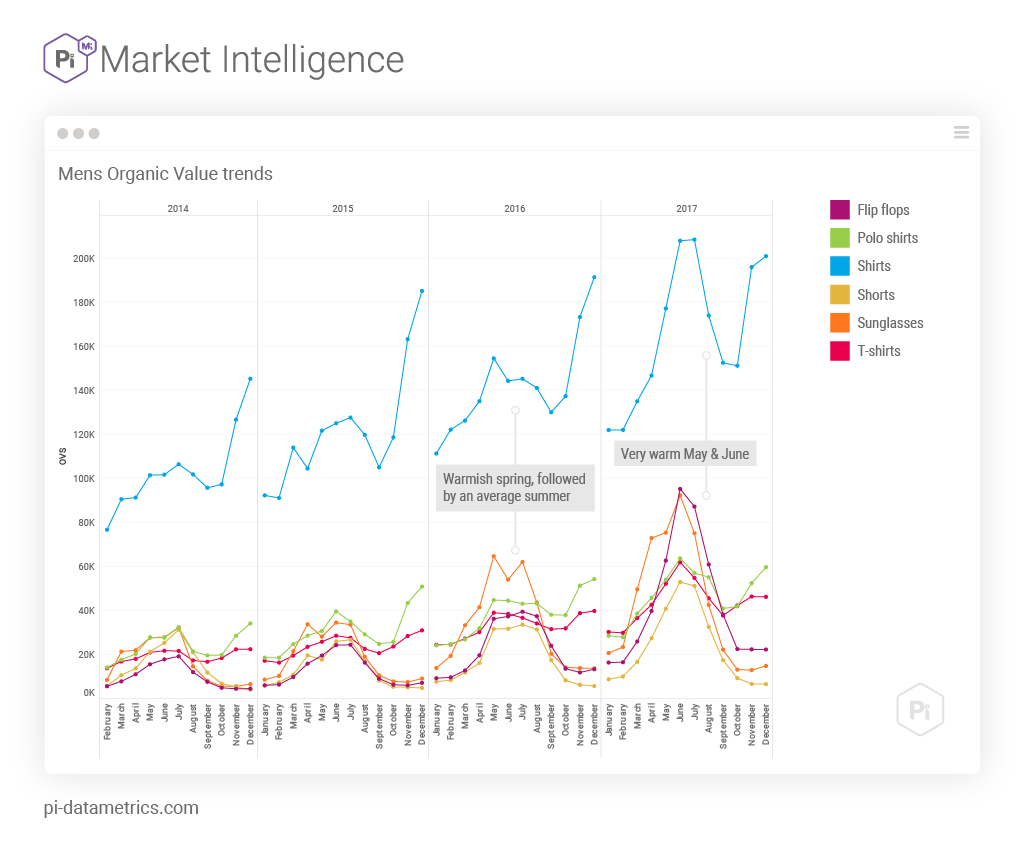 Searches began to climb as early as February, reaching their peak in June – the month where temperatures were highest – before beginning a steep decline from July onwards.

In particular, searches for flip-flops and sunglasses experienced higher demand, and for more months of the year, than in any of the previous three years. The report by Pi concludes, “Out of all external affecting factors, weather is one of the most probable causes for the uplift in this category.” 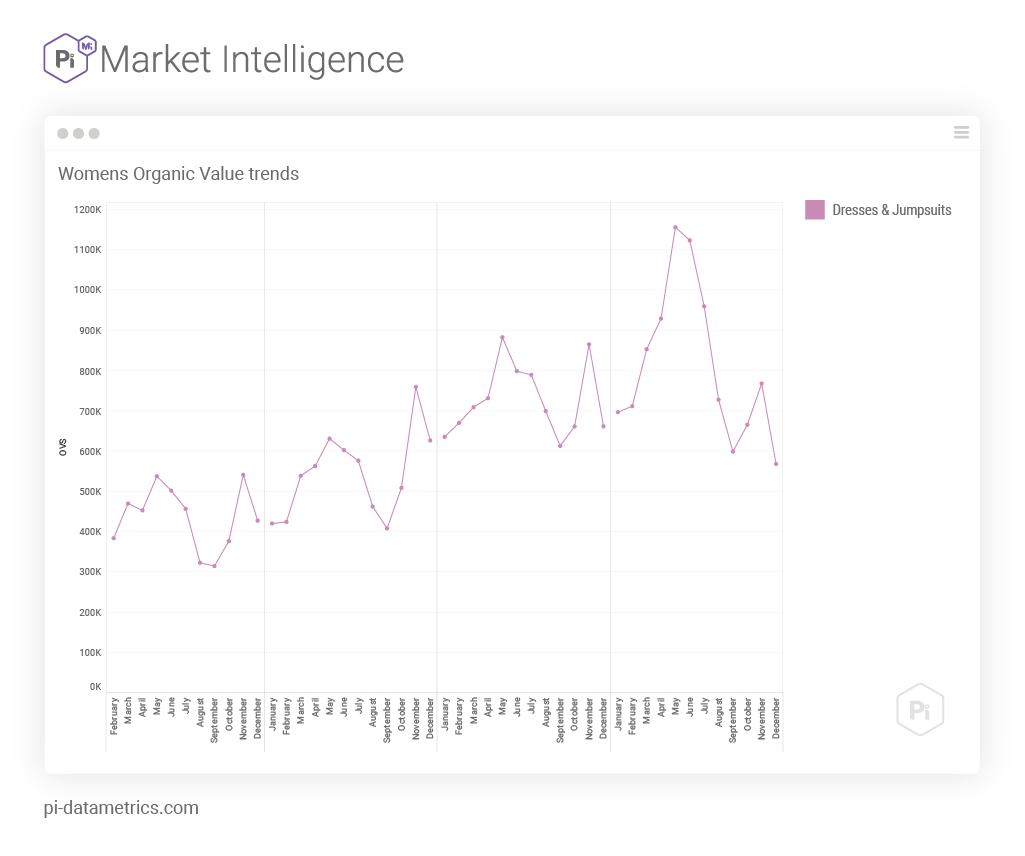 The category then saw a slight drop-off from May to June, before organic search value dropped off dramatically from July through to September. Search demand for dresses and jumpsuits then saw another, smaller surge in the autumn due to a much warmer than average October – as we’ll see later on.

In the report, Pi Datametrics notes that, “a retailer specialising in women’s fashion may well have experienced very positive performance as a result of the warmer weather last year.

“Digital teams may have been congratulated as a result, but without weather insight, they may not have known why. If weather gets colder in the following years, these teams may get heat for poorer performance across summer clothing.

“It’s best to be aware of external weather factors to use them as your shield and your weapon.”

The impact of weather on search demand: Winter clothing

This caused searches for both men’s and women’s jackets and coats to reach a peak in November 2016, before experiencing a sharp drop-off during a much milder December.

2017, by contrast, saw comparatively less demand for winter coats throughout the year as a whole. Demand for jackets and coats climbed steadily upwards from August to September, but slowed dramatically in October (in women’s clothing, jackets and coats experienced a slight drop in search value), due to temperatures being 1.8 degrees above average.

While search demand still peaked in November, it peaked at a significantly lower level than in 2016, when the weather was much colder. As the report points out, this would have completely overturned expected growth in the jackets and coats category, based on figures from 2014-2016 – which could potentially cause major losses for retailers who had invested in the category expecting it to grow. 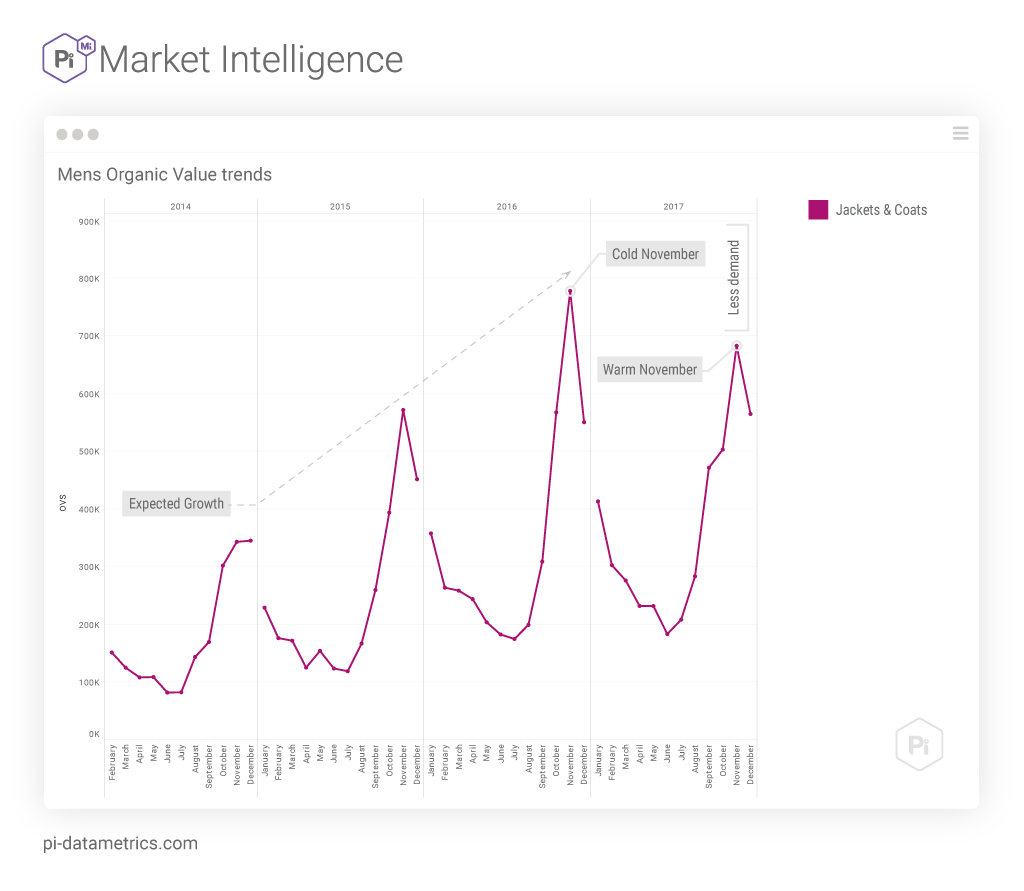 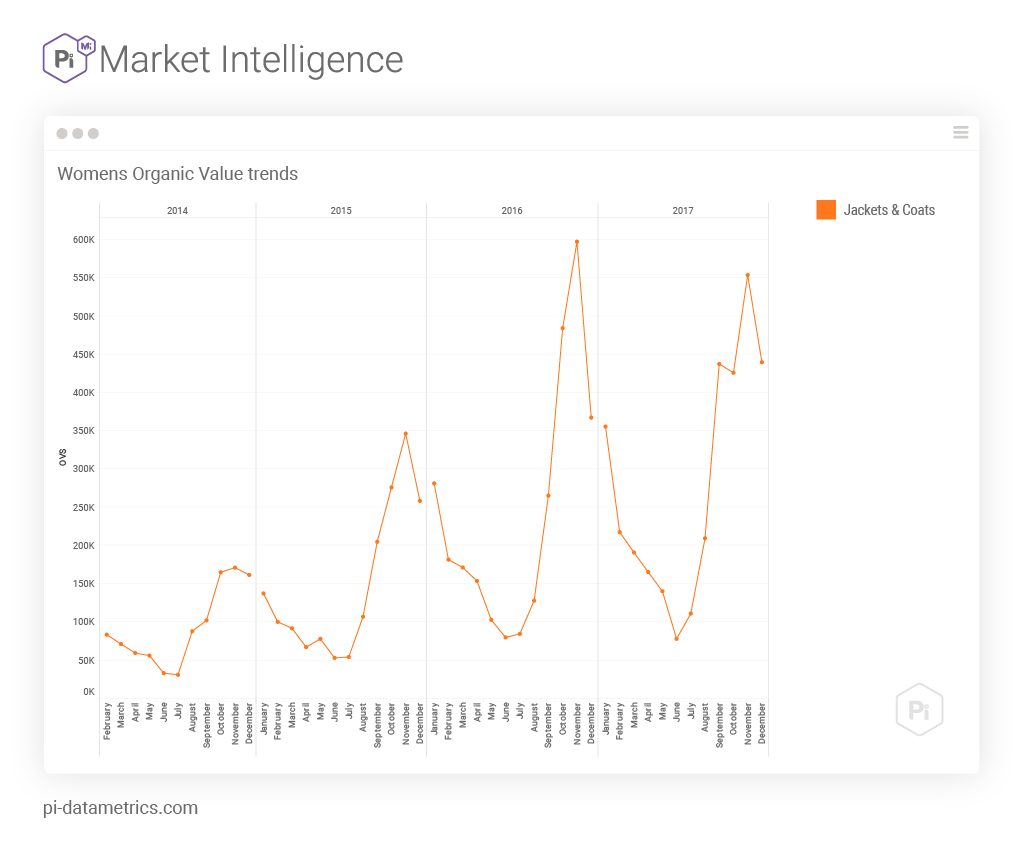 “When weather expectations don’t match reality, it can mean a large loss in revenue for some retailers,” the report states. “As a result, some Digital teams will have a lot of explaining to do.

“With real weather context, they could go some way to explaining negative performance, and offsetting scrutiny of their own activities.”

How can retailers adapt their strategy to changing weather conditions?

How can marketers in fashion retail adapt their strategy to make sure they take advantage of weather-related upswings in demand, and weather the impact (sorry) of possible losses?

It’s difficult, if not impossible, to predict the weather with accuracy too far in advance. The Met Office offers generalised long-range forecasts up to 30 days ahead, while warning that small atmospheric events can easily lead to unexpected changes in the weather just a few days later.

However, there are still steps that you can take to “weather-proof” your digital strategy.

Make contingency plans, and prepare for the unexpected

By itself, acknowledging the likely effect of weather on search demand and retail performance is a significant step towards being more prepared for it. Based on this, you can start to form contingency plans, and make preparations for a rainy day (groan – sorry, sorry).

Look back over past weather trends and compare them to marketing performance for your brand, particularly search data if you have it. What correlations can you spot? How did you react at the time? Was there anything you would do differently if a similar situation arose (e.g. an unexpected bout of hot weather)?

At Figaro Digital Marketing Summit earlier this year, Pi Datametrics’ Sophie Moule gave a presentation on how to use search trends as a form of customer intent data, and tailor your digital strategy accordingly.

By looking back over search trends in their industry, Moule advised, marketers can familiarise themselves with the peaks and troughs in customer demand, and plan their digital campaigns around them.

This could involve activating paid media over a period of time when search demand is on the rise, which allows you to build up a strong cookie pool for retargeting during the peak purchase period. Or using periods of lower demand to plan and publish content, ready for when demand surges again.

A version of this can be applied to weather-related peaks and troughs in demand.

If summery weather makes an appearance earlier than expected, you can activate paid media during this period, to build up a pool of data for retargeting during the traditional summer months. The same applies to wintery clothing during an early period of low temperatures.

­­There will always be factors affecting sales that are outside of your control.

It won’t always be possible to turn an unexpected weather situation to your advantage, but armed with the knowledge of what’s going on, you can manage the expectations of higher-ups and stakeholders, and show that everything possible is being done to mitigate, or benefit from, the situation.

As Pi Datametrics notes in the report, weather is never going to be the sole factor affecting demand – holidays, seasonal events like Black Friday, and economic shifts can all impact on clothing sales and search volume. Nevertheless, “assessing weather conditions against demand trends is still hugely important in giving context to searcher behaviour and your business’ performance.” 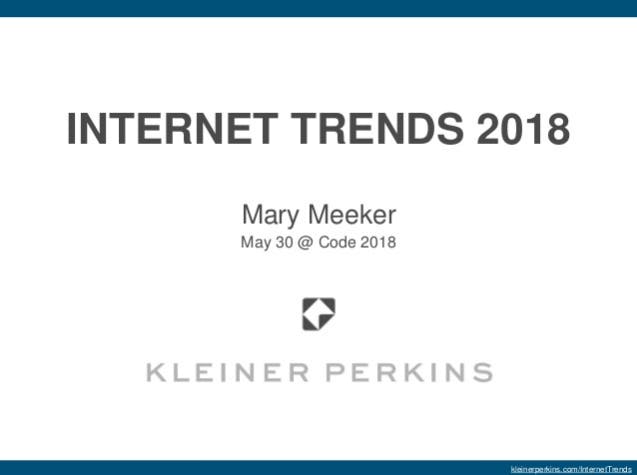