Some, like the massive SXSW festival held in Austin, Texas, had been reassuring attendees that the programming would be going ahead as planned until their hands were forced by cities banning gatherings of several hundred people; others have reacted to the increasing unease and withdrawals from both attendees and sponsors by proactively postponing or cancelling their events.

However, a number of events have found a way to continue with their programming while still preventing the undue spread of coronavirus: they’re going virtual. Events like Google’s Cloud Next in April, Adobe Summit in late March, and tech conference Collision in June have announced that attendees will be able to join from home as they shift talks, panels and discussions to streaming platforms and apps. Some new events have also sprung up, like Virtual Commerce, an online alternative to the retail-focused ShopTalk conference in March.

But with conference-going a staple of many marketers’ calendars, providing a chance to learn, network and socialise with industry experts and peers, how will the virtual conferencing experience compare? How can event organisers replicate the experience of attending conferences as closely as possible using digital tools, and prepare for the inevitable infrastructure demands as attendees log on to streams and apps? Might there even be some advantages to as digital event? And will we see a long-term impact on how conferences are carried out in the industry?

Collision is a global technology conference held in June every year that bills itself as the “anti-CES”. Last year, it drew upwards of 25,000 attendees from 125 countries to its venue in Toronto, Canada. This year, however, its thousands of attendees will be tuning in to speakers like Thuan Pham, the CTO of Uber, Jonah Peretti, Founder of Buzzfeed, and Anna Gedda, Chief Sustainability Officer at H&M, from home.

Collision has rebranded its 2020 edition as “Collision from Home” and is preparing to host its 30,000-plus attendees (including 1,600-plus CEOs and more than 1,300 journalists) entirely in cyberspace. The event’s organisers moved quickly to rethink the event’s logistics as coronavirus spread across the globe, and by early March, had announced that Collision would be going ahead online.

“One of the reasons that we felt confident about moving Collision online is because we have networking capabilities within our app,” says Katherine Farrell, Communications and Media Co-ordinator for Collision and Web Summit, Collision’s sister conference and the largest technology event in the world. “Our engineering team has been building out this app for the last five to six years – it’s there to complement your offline experience.

For Collision, replicating the in-person networking experience is the most crucial part of running its event virtually. Farrell is reasonably confident about the event’s ability to hold video talks and livestreamed panels, but event content is just the “icing on the cake” compared to the networking opportunities that Collision offers for senior CEOs, investors and technology start-ups who will meet, form connections and discuss business at the event.

“On that exhibition floor, we have a lot of lounges and spaces where we provide other experiences as well as the content for attendees,” says Farrell. “The reason that attendees come to our event is because they want to meet people. We want to build in every kind of Collision experience into the app – all that serendipity that you can get offline. That’s the challenge that we have now for the next three months: to build all of these experiences in-house and incorporate them into the app.”

Collision has something of a head start on the infrastructure needed to run an optimal virtual conference. It already has a featureful app with capabilities like the recommendation algorithm, which also recommends talks for attendees based on their interests; and organisers had already planned to build in the additional networking capabilities to support their offline conferences – but for 2021 or 2022, not June 2020.

“We definitely have the resources for doing it – we already have the app, we’ve already built the software,” says Farrell. “We’re constantly adding new features into it all the time. But obviously we’re going to have to work now at a faster pace!”

Farrell acknowledges that a virtual conference won’t be able to replace or entirely replicate “the richness of face-to-face interaction” – but she sees a number of other advantages coming from the situation.

“I think there’s going to be a great networking effect with this,” she says. “So far, a lot of people have registered interest to come, and more than 250 speakers have agreed to run panels online as well. It’s easier for us to get more people involved, because they don’t have to travel – they only have to give that 20, 25 minutes for the panel, to come online or meet up with someone, if they’re all doing it from home.

“Of course, the usage of the app will go through the roof, so we need to prepare the infrastructure for that as well.”

Another, smaller-scale event that has taken the ‘plunge’ of going virtual is SEO in the Shed, a London-based event run by search platform Pi Datametrics. The event began as a video series hosted by Pi Datametrics CTO Jon Earnshaw, and aimed at building an SEO community geared around people learning and sharing with one another.

Last December, the company ran its first in-person event with talks and networking opportunities, which was well-received by attendees, leading Pi to subsequently launch SEO in the Shed as a quarterly event series. However, as the coronavirus outbreak spread, the company decided to rethink its plans and make its March event, due to be held on the 18th, a virtual experience instead.

“It’s actually been relatively easy to re-plan SEO in the Shed as a virtual event,” says Sophie Moule, Head of Marketing at Pi Datametrics. The event originated, after all, as a video series – and luckily, all of Pi’s booked speakers are comfortable with using webinar tools. However, Pi doesn’t want to lose the interactivity and community that it had started to build with the in-person events.

“Obviously, the social activities and networking are more difficult to replicate online, but one of the first things we did was to purchase some additional webinar software, because we haven’t run large-scale webinars before,” says Moule. “It includes features that will allow the audience to take part via Q&As and ‘raising their hand’ – and we’ve also been exploring ideas for ‘virtual happy hours’ and audience interaction.”

Moule is upbeat about the impact of holding a virtual event on the community that Pi has been building around SEO in the Shed – for one thing, it has opened the event up to registrants outside of London and the UK. “We have more global sign-ups now, which is really positive,” says Moule. SEO in the Shed has now seen more than four times the number of registrants than had originally signed up for the physical event. “I think this is a really good opportunity for marketers to move events online, rather than postponing or cancelling them, if they can.”

The future of virtual conferences

Both Moule and Farrell are positive about the networking and interaction prospects offered by a virtual event – and while they obviously would be, there are plenty of advantages to recommend online events, particularly in the current climate with an increasing percentage of the workforce working remotely.

A recent Econsultancy and Marketing Week survey of more than 2,200 global marketers found that of those 539 respondents working in the marketing and advertising sector, 44% believe the ability to adapt to a move to virtual meetings and events will be critical for competitiveness over the coming months, while a further 48% believe it will be important. 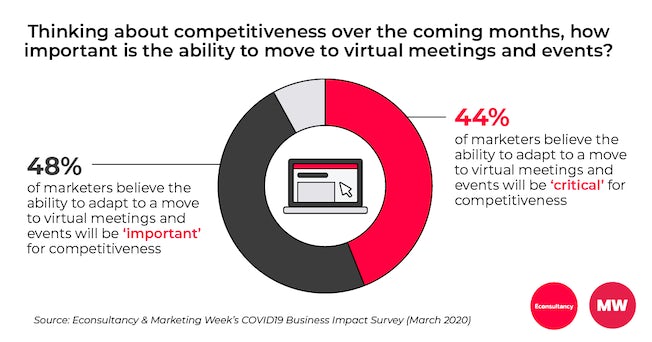 “With more and more people working remotely, they might want to access the content and the community online more often than once a quarter – so we’re thinking that we might up the number of these events to be a lot more frequent,” Moule observes. “If people are working from home, and they don’t have access to that community, that’s something that we might be able to facilitate. We can still achieve our community-building objective, but just in a slightly different way.”

Going forward, Moule predicts that the virtual event experiences and online communities built during this time period will have a long-standing impact on the industry. “I think flexible working, and people proving that that’s a viable way to work, is such a positive thing for so many different industries. It just gives people an opportunity to work in a way that’s right for them.

“As for events – I think people will continue to run physical events, but they might make the online content more accessible, as it’s a way of engaging people who can’t necessarily make it to the event, who might be based in different locations, or whose company isn’t able to pay the price of a ticket to the event. Also, having more talks and thought leadership online might provide a chance for people who aren’t that confident in getting up and speaking in front of a big room of people to give talks and present their views to their community. So, hopefully we’ll see some additional ‘influencers’ coming out of online events.”

Similarly, Farrell believes that while “nothing will replace face-to-face interactions” at conferences, an increasing number of offline events will need to find creative ways to adapt to the current circumstances. “I think conferences in general will be changed forever,” she says. “We might see completely online conferences, or we could see more online interaction complementing offline.

“The reception around Collision from Home has been extremely positive, and obviously people are very understanding about the times we’re in – but they’re also really excited to take part in the online elements of the conference. Going forward, it’s just going to be about becoming super adaptive and super creative, and thinking about how we can add in extra value for start-ups and investors. We’re in constant contact with speakers and partners as well, to understand what their objectives are and what they want to get out of the event.

“Overwhelmingly, it’s the networking element – they want to be able to log off and know that they’ve met someone who will be of extreme value to their company. So, the challenge will just be bringing that online.”

After publication of this article, Google announced that its virtual version of Google Cloud Next, Google Cloud Next ’20: Digital Connect, would be postponed “out of concern for the health and safety of our customers, partners, employees and local communities, and based on recent decisions made by the federal and local governments regarding the coronavirus (COVID-19).” The company has not yet given further details about the issues with running the event or when it might be held.

For more on the impact of coronavirus on the marketing industry, visit our coronavirus topic page. 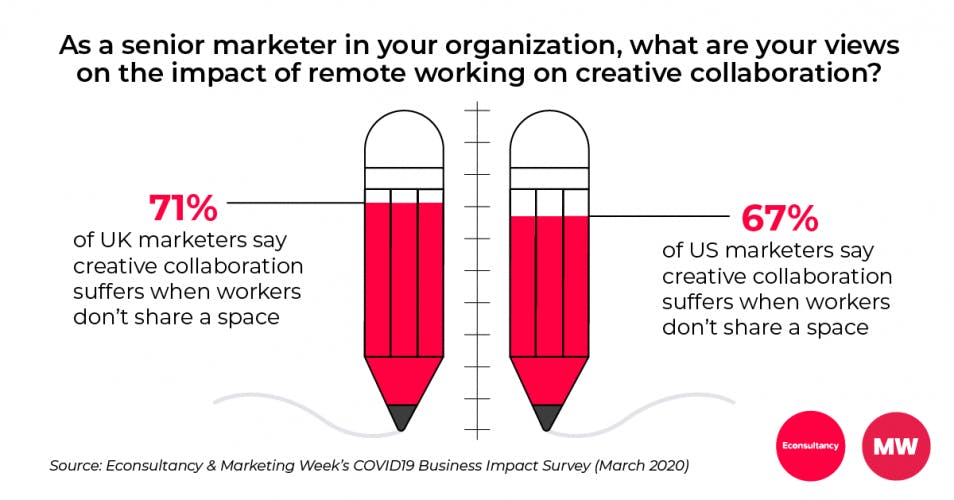 As organisations increasingly shift to remote working to prevent the increasing spread of coronavirus (COVID-19), a survey of more than 2,200 marketers conducted by Econsultancy and Marketing Week has revealed how marketers feel distributed working will affect their professional activities. 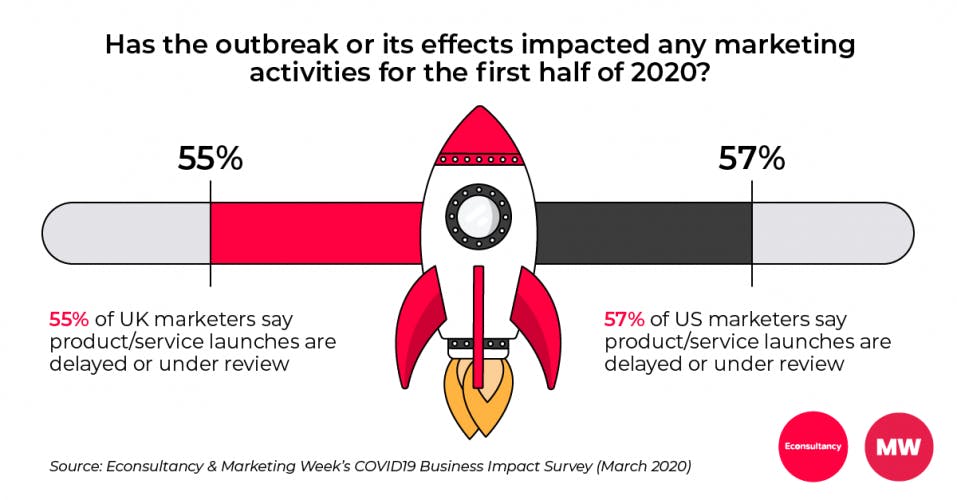 The long-term effect that coronavirus (COVID-19) will have on businesses is as yet unknown. 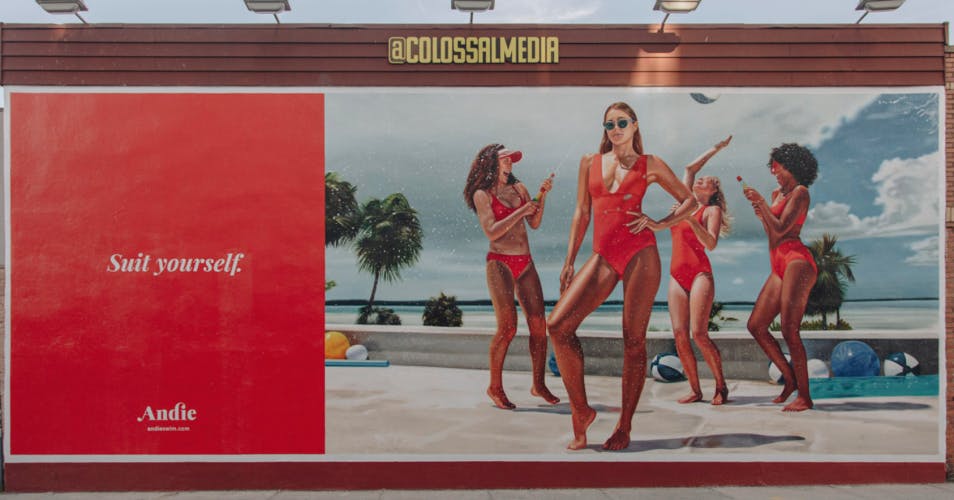