Display advertising more broadly had a big year in 2013. In spring, Google announced that it had MRC (Media Ratings Council) accreditation for its definition of a viewable ad.

So, what Google terms to be a viewable ad (that’s 50% of the ad in view for at least one second) is supported by many in the industry.

This was significant because it allowed advertisers to have more faith in what they were being charged for. And it might even benefit Google.

In the words of Neal Mohan, VP display advertising:

We believe that the industry’s significant investment in brand measurement efforts can substantially grow the online advertising pie, for all.

But what about trading on the viewable ad, allowing advertisers to pay only for ads that get seen?

Well, in December 2013 Google started charging only for ads that were in view.

This blog has featured some fairly high level discussion of whether that’s a good thing. And despite some mixed results showing that it’s a complicated picture, Doug Conely VP of product strategy & operations at Exponential summed it up nicely:

..[the metric of viewable impressions has] raised our game and provided another useful tool with which to evaluate media.

The more we can use this to encourage publisher partners to create web experiences with fewer ads and richer creative options that are more likely to be seen, and the more we encourage advertisers to value that then the better the web will be for publishers, advertisers and consumers alike.

Besides, Google seems fairly adamant, and it makes sense to me, that increased viewability translates into better campaign performance.

Here’s one of Google’s charts looking at CTRs on viewable and non-viewable ads, above and below the fold. 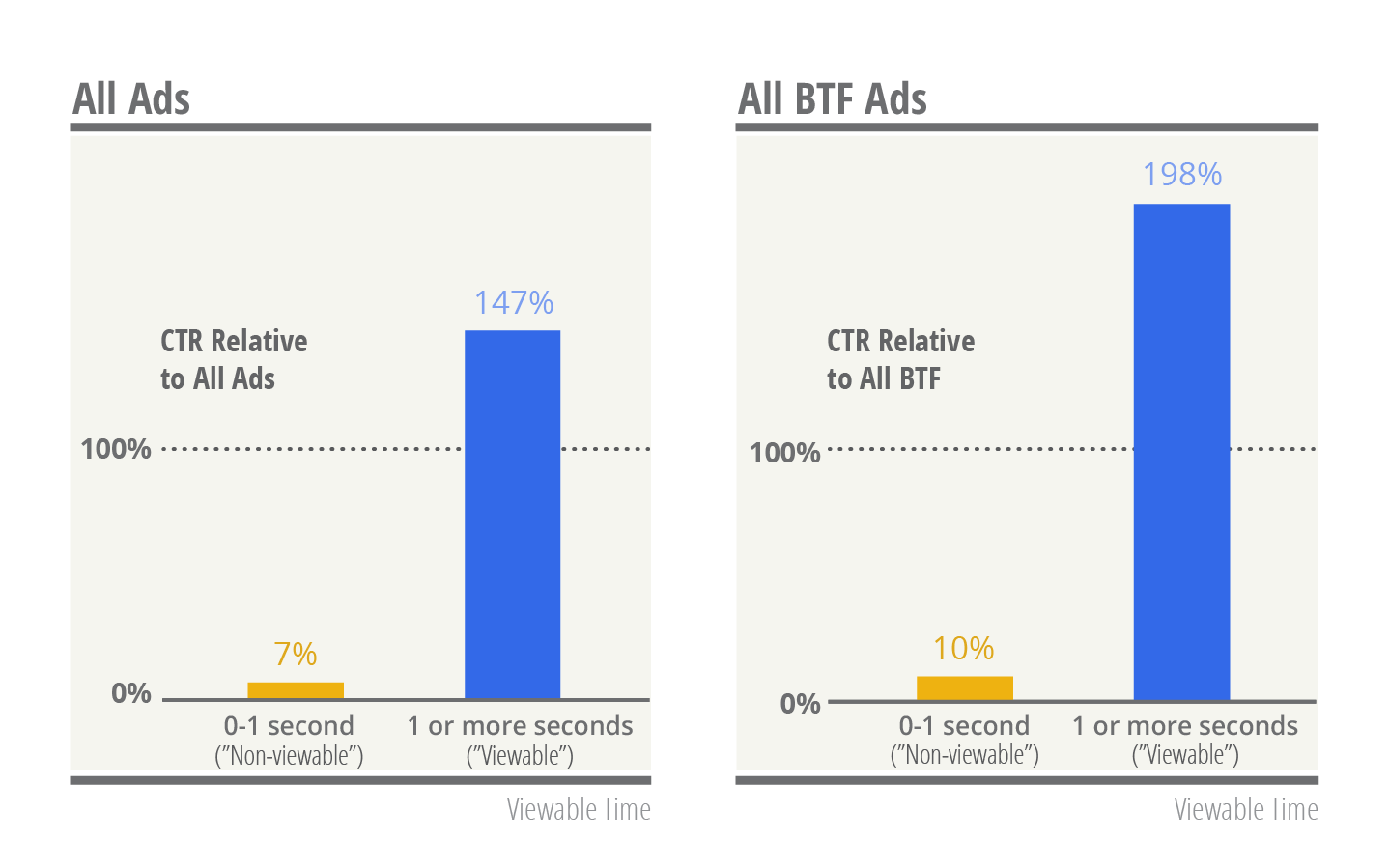 Charging for viewable impressions makes even more sense when you consider comScore’s study from August 2013, showing that more than half of digital ads (54%) are never seen by consumers.

Google AdWords for video works on the same lines as standard display, in that the aptly named Trueview service means that advertisers pay only when viewers watch their ad and not by the ad impression.

Your video can be served in-stream (pre-roll and mid-roll), in a display ad unit, in a YouTube search or in slate (as an unskippable ad).

Here you may wonder what ‘watching an ad’ means for a pre-roll or mid-roll ad. What if a user just hits skip after five seconds? I was pleasantly surprised to find that advertisers are only charged when the viewer watches 30 seconds of the ad or watches to the ad’s completion, whichever is shorter.

However, there is a second consideration here, even if the video is running, is it in view? Is the browser minimised or is the ad muted? For in-stream ads and particularly in-slate (the ads you have to watch to the end) this is a big consideration as users seek to escape ads.

This is where transparency gets tricky. What constitutes visible and ‘viewed’? How stringent can the standards be? Is the answer ‘the more stringent, the closer to a true number’?

The OpenVV consortium is made up of 20 companies, including Nielsen and Infectious Media, that are attempting to make standards more stringent.

Open VideoView (OpenVV) is an open-source viewability code for in-stream video advertising that was released in May 2013.

Crucially, the code tracks whether a video is in view, whether the ad is muted, whether or not the window is active, player size and the exact percentage of video that is viewable on a user’s screen. Many argue this is the extent of measurement required and that standards should be tightened.

Brian Cohee, SVP of data and systems at Mixpo, added:

Raising the awareness of off-page inventory and the need for a standards-based measurement of viewability is vital to the video advertising industry.

TubeMogul, one of the consortium, has integrated this viewability solution into its software and defines a video as viewable if 50% of the video is in view for at least five seconds. Here’s one its videos explaining viewability:

There are some ad networks that don’t yet do enough to account for viewability.

How far do we go?

Will viewability of video go beyond the mechanics of measuring what’s in view, for how long, and perhaps measure whether the viewer saw the brand message or product?

This is difficult to do. Of course, television is not beholden to these metrics. Advertisers don’t know how may people have muted their televisions for an ad.

The double-edged sword of the web is how granular we can go with measurement. But in the long run, video and display advertising has to work for advertisers, publishers and users.

Website owners must value inventory. Being judicious and ensuring viewability as much as possible then charging transparently for it, will benefit advertiser, user and publisher.

I’m fairly new to this topic so please give me some nuggets below, put me straight or tell me I’ve completely missed the point.

A satisfying mixture of cutting edge web design, charming images and delightful usability makes the Visit Suffolk website a joy to get lost in, as much as the county itself.

Did I sound too much like an actual tourist board there?

Possibly, but it’s genuinely difficult not to be charmed by this site. Offering an experience that is not unlike exploring any attractive UK destination. In my experience I’ve certainly not found a tourism website quite so captivating.

Native advertisements should tell compelling narratives that are tailor-made to contextualize the brand for a particular audience in a way that makes the brand personally relevant to that audience.

When discussing (editorially) native advertising we focus too much on how integrative it is instead of how relevant it is.