This week, in a bid to remain relevant in a fast-moving digital age, notorious disruptor Airbnb has announced that it will be branching out into a new market: urban planning.

We look at what is known so far about Airbnb’s new housing project, Backyard, which it hopes will transform urban planning and architecture in the same way that Airbnb transformed renting.

Plus, Liverpool FC is developing its digital strategy with the help of a new partner, Singapore’s government is supporting SMEs undergoing digital transformation, and a new whitepaper has revealed the extent to which HR is being left out of digital transformation programmes – as well as how detrimental that can be.

Airbnb, the infamous disruptor of the rental market, has set its sights on a new industry.

Fast Company reports this week in an exclusive piece that Airbnb is planning to move from sharing houses to building them in a bid to diversify its business and keep the company relevant and profitable far into the future.

Airbnb’s housing initiative, called Backyard, is a product of the company’s futures division, founded in 2016 to develop new products and services for Airbnb. A press statement about Backyard calls it “an endeavour to design and prototype new ways of building and sharing homes”, with the first wave of test buildings going public in 2019.

The urban planning industry has plenty of room for innovation. Fast Company’s Mark Wilson writes that there is a “real need to rethink housing”, and a huge demand for it – the UN predicted in its Global Status Report 2017 that the world will construct an additional 2.5 million square feet of buildings by 2060.

It’s not clear yet exactly what Backyard’s homes will be like, but one thing they’re sure to be is futuristic. Backyard’s project lead, Fedor Novikov, previously researched robotic construction for NASA, and according to conversations between Fast Company and Airbnb’s co-founder and Chief Product Officer Joe Gebbia, the homes built by Backyard will be “adaptable … spaces that evolve and even reconfigure to the occupants’ changing needs.”

What all this means in practical terms is hard to say, as Airbnb is obviously playing it close to the chest until the new houses are ready to be revealed. But it’s clear that Airbnb’s founders have plans for Backyard to be as disruptive in this industry as Airbnb has been in the rental market.

This week brings the news that Liverpool Football Club is also branching out in a bid to transform itself digitally. The club has announced a partnership with business communications provider Mitel which is aimed at enhancing the club’s fan experience.

According to the official announcement on Liverpool FC’s website, the two companies will work together to create “innovative cloud-based communication and collaboration solutions”, which will allow fans to quickly and securely connect to the club from anywhere, via voice calls or online, using any device.

The Mitel partnership is just the latest development in an ongoing digital journey for Liverpool FC. In August, the club celebrated a number of digital successes with video and social media, reaching one million subscribers on YouTube, and attaining more than 52 million views across its videos in the first half of 2018 – making it the most popular English football team on YouTube.

The club has managed to increase fan engagement across the world and reach its largest ever online audience with a mixture of heart-warming videos involving young fans, vlogs, comedy moments and behind-the-scenes videos. Liverpool FC also makes a point of engaging with its fans on social media, and has the fastest-growing Instagram account in the Premier League.

The most-watched video on Liverpool FC’s YouTube channel and Facebook page, in which star forward Mohamed Salah took part in a hilarious prank to surprise schoolkids

Black Friday and Cyber Monday are now behind us, which for many means that the Christmas season has officially begun. But what have two of the biggest events of the shopping year taught us about retail digital transformation?

Looking back on the successes and failures of Black Friday and Cyber Monday, ZDnet has published a round-up of six things we can take away about the current state of digital transformation in retail. Here are a few of their lessons:

All 43 police forces across England and Wales will be undergoing digital transformation to streamline the police force’s digital presence, ITPro has reported this week – and BT and Deloitte have been chosen to spearhead the project.

The two companies have been awarded the contract for delivering the National Enablement Programmes (NEP) for policing, part of The Policing Vision 2025, a comprehensive vision for modernising the police force which was set out in 2016.

Deloitte has been selected as the client delivery partner to lead the programme’s implementation, while BT will play host to a centre for cyber excellence for police forces, based in one of BT’s existing Security Operations Centres.

Part of the Policing Vision 2025 involves implementing the latest cloud-based tools to increase the effectiveness and communication of police forces, according to ITPro. In particular, the National Enablement Programme is designed to get all police forces across England and Wales using the same software.

Local forces will still have control over the technology they need for their teams, but won’t need to worry about maintaining it, thanks to the National Management Centre (NMC) provided by BT.

This will go some way to alleviating concerns raised by Neil Roberts, Chief Information Officer for the Sussex Police Force, at a roundtable to discuss the digital transformation of policing last February.

During the discussion, Roberts highlighted the huge amount of police resources eaten up by the need to maintain infrastructure. “We understand the infrastructural challenges, [but] we don’t want to manage infrastructure,” he said.

“The police should be good at policing, not running data centres.”

Singapore’s government has created a new initiative aimed at helping wholesale trade SMEs (small and medium enterprises) with the adoption of digital technology and internationalising.

A new Industry Digital Plan (IDP) for the wholesale trade sector, launched by Senior Minister of State for Trade and Industry Dr. Koh Poh Koon earlier this week, will benefit more than 33,000 SMEs and help them “accelerate their digitalisation journey”, according to the plan’s media release.

Human Resources Online reports that the plan is comprised of a three-stage “digital roadmap” that charts out different digital solutions that SMEs can adopt at each stage of their growth, along with relevant training programmes for employees.

Companies can also consult the SME Centres and SME Digital Tech Hub for advice and a comprehensive business diagnosis, and Enterprise Singapore – a statutory board under the Ministry of Trade and Industry – will provide assistance for SMEs embarking on more advanced solutions. 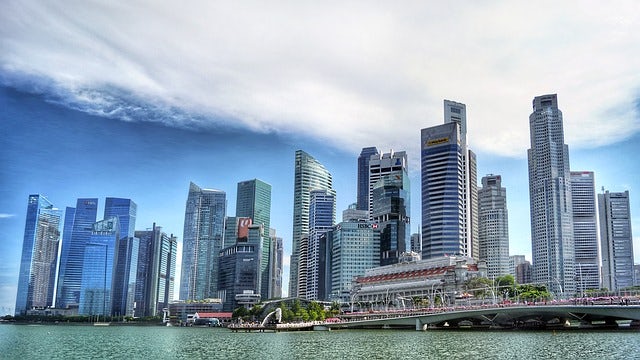 While Zscaler, who carried out the research, didn’t provide information as to the size of the companies surveyed, small businesses often need more support, guidance and resources than large businesses when it comes to the hefty undertaking of digital transformation.

The government’s new programme is therefore likely to significantly boost the percentage of companies in Singapore that are undergoing digital transformation, and more importantly, undergoing it successfully.

HR is being left out of digital transformation – to its detriment

When it comes to the question of how to make a success of digital transformation, the advice can vary greatly – but many common threads crop up repeatedly.

One of those threads is about the importance of people to digital transformation. We’ve covered a number of articles and case studies that highlight the necessity of a “people-powered digital transformation”, or else point to the need to upskill your existing workforce and hire for the right new talent.

And yet a new whitepaper published by talent acquisition firm Capita Resourcing has found that digital transformation in many UK organisations is being held back by a lack of HR involvement.

“This lack of HR involvement can seriously undermine the organisation’s efforts to transform itself,” the whitepaper’s author warns. Indeed, the knock-on effects are evident: 94% of HR leaders surveyed reported experiencing difficulties with gaining the skills needed to support digital transformation, while 82% asserted that their workforce needed to improve its skills in order to make the most of new ways of working.

84% of HR leaders said that they would like to take on more of a leadership role in digital transformation projects, but 20% felt held back by a lack of leadership experience, 19% by a lack of time and resource, and 18% by a lack of internal support or sponsorship. 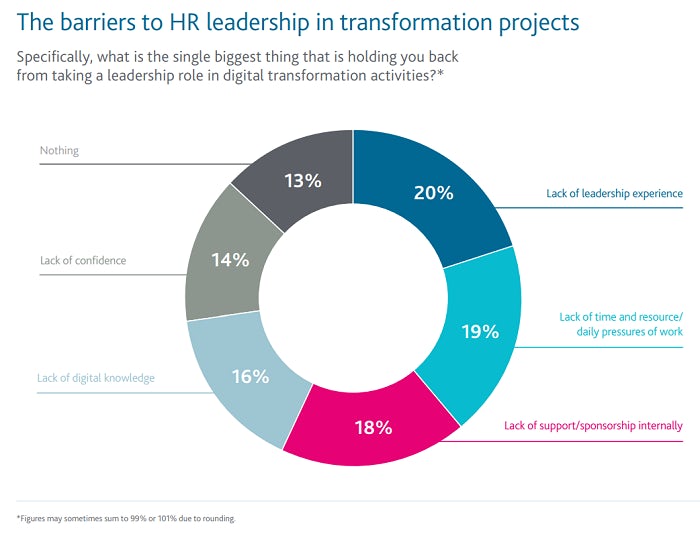 Respondents to the whitepaper believed that HR could benefit organisations in all sorts of ways by taking a leadership role in digital transformation, including identifying talent skills and gaps in the business ecosystem, ensuring that employees were being given the opportunity to develop required skills, and continuing to focus on maintaining an agile workforce
following transformation initiatives.

“Organisations must start to realise that transformation always needs to be workforce-driven, and it’s therefore essential that the HR department plays an important role, to identify and access the skills required at each stage of the journey, from planning and design, through the change programme itself, and beyond.

“In doing so, HR can protect and establish the right culture and behaviours within the workforce.” 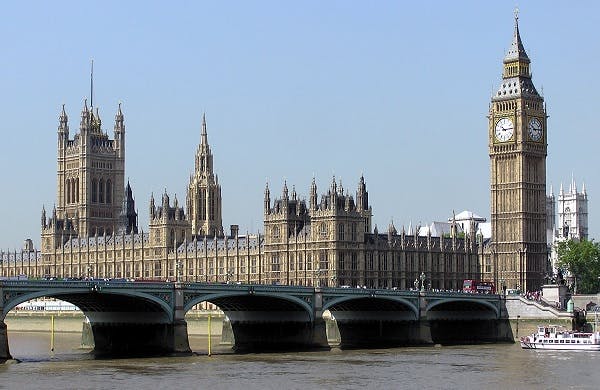 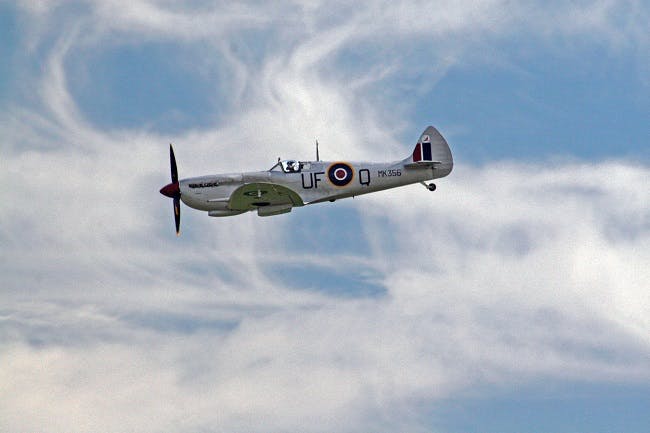 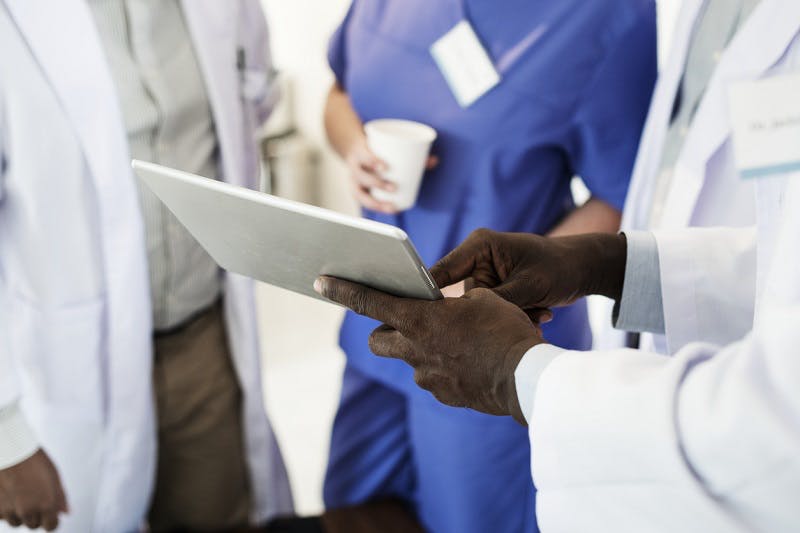