Boyce spoke about the number of tactics Domino’s has used to put itself in the position of pizza market leader – “owning 21% of the market share”.

The overarching social strategy that he highlighted was Domino’s’ ‘three layers of digital’ – categorised as ‘unifying national moments’, ‘passion points’, and ‘everyday occasions’ – which Boyce said helps Domino’s frame, organise and distinguish its activity on social.

Here’s a little more detail on what Domino’s have been up to on social this year.

New Year’s Day – or as Boyce put it, the “most hungover day of the year” – was the first example he gave as ‘unifying national moment’.

Domino’s used data collected from the previous year to identify a strong correlation between the last two days of the year and an increased number of pizza orders received over those two days.

This insight into its customers’ behaviours in relation to these specific dates gave Domino’s the ability to plan ahead and position itself as ‘The official food of recovery’ for New Year’s Eve and Day 2018.

Domino’s deployed a nationwide multichannel marketing campaign to engage existing and potential customers. Using a mixture of localised contextual messaging across social and display, OOH advertisements and light-hearted pieces of content like ‘The Recovery Channel’, Domino’s was confident that consumers would follow the same trend as in 2017 and order Domino’s pizza to ‘recover’ from their hangovers.

All of this activity saw Domino’s achieve the following results across the New Year’s Eve and Day:

I mean! I've never been so excited for my @dominos_uk to arrive! This is SO needed today #passthepizza ???? #recovery #happy2018 #ad pic.twitter.com/4AX3wBC0uo

Valentine’s Day was the next occasion Boyce spoke about, with Domino’s calling itself “the official food of tasty chat-up lines”. The company developed a branded chatbot for Tinder called ‘Dom Juan’, which customers could talk to via the dating app – with the chatbot programmed to feed users ‘cheesy chat-up lines’ to send to their Tinder matches.

Looking for someone who wants a pizza you this #ValentinesDay? Speak to me, Dom Juan, Domino's chat-up bot on @Tinder – get swiping & I'll feed you the cheesiest, most doughmantic chat-up lines I know. #OfficialFoodOf Tasty Chat-Up Lines pic.twitter.com/tzNC30JN9U

The Valentine’s Day campaign also included other activities: a curated Spotify playlist and TV ads running throughout popular TV soap Hollyoaks were just two of these.

The launch of Domino’s’ branded Tinder chatbot combined with its other online activity over 14th & 15th February saw the following results:

Domino’s used a mixture of influencer marketing (starring former Premier League footballer and Soccer AM presenter Jimmy Bullard), a branded content partnership with the SportsBible, and a special World Cup pizza (‘Meatfielder’) to crown itself as ‘the official food of not going to international football tournaments’.

This multi-pronged approach, in tandem with the nation’s fixation with football (both eating and ordering pizza whilst watching matches), helped Domino’s demonstrate the power of using social channels as a means to not only drive brand awareness and uplift revenues but also prompt consumers to solicit their natural behaviours, in an unintrusive way.

The campaign proved to be a huge success from both an awareness and ROI standpoint, with Boyce citing the following results:

‘Passion points’ were defined as occasions to which Domino’s can act as the perfect accompaniment: not necessarily fixed or observed nation-wide like Valentine’s Day, but with enough of a collective interest. One of the campaigns Boyce pointed to was Domino’s’ unofficial partnership with hit reality show Love Island.

Similar to the New Year’s campaign, Domino’s pinpointed the behavioural habits of its intended audience – eating/ordering its pizzas during the programme’s run-time – and used reactive social messaging, targeted display ads and pre-rolls on the ITV Hub and even more nuanced tactics like customised push notifications to hone in on potential consumers while the show was airing.

Boyce was quick to point out that these ‘passion points’ weren’t solely confined to reality TV shows, with popular series like Game of Thrones and the English Premier League also falling into the same category.

This leads onto the last type of activation Boyce spoke about: ‘everyday occasions’. Heavily reliant on huge amounts of customer data, and the most difficult of the three to deliver (according to Boyce), this is how Domino’s plans to become “the official food of everything”. 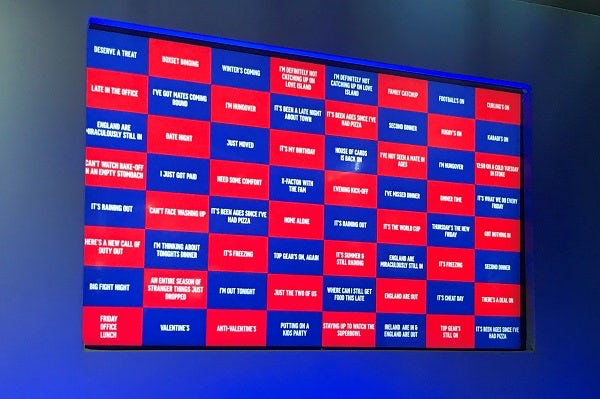 The picture above shows just how many everyday scenarios Domino’s sees itself supplementing – from ‘deserve a treat’ and ‘I just got paid’ to ‘can’t face washing up’ and ‘second dinner’.

Although this means that Domino’s must produce a lot of content, the brand is determined to honour its digital vision – “we [want to] make their next order a Domino’s” – something it hopes to achieve through partnering with the right publishers, brands and influencers, innovations through their products and “delivering content that’s absolutely right for the right person, right time, right place”.

Boyce’s presentation provided some great insight into how Domino’s sees itself as a digital business, and as such, positions itself as the first pizza company that you think about when you want to order a takeaway no matter where you are or what device you’re using.

By using a wide range of marketing activity – ranging from influencer-led campaigns to contextual messaging – the UK’s number one pizza brand could be close to fulfilling its mission of being “the #1 in every neighbourhood in the world”.

Read more of our great brand content from Festival of Marketing 2018: 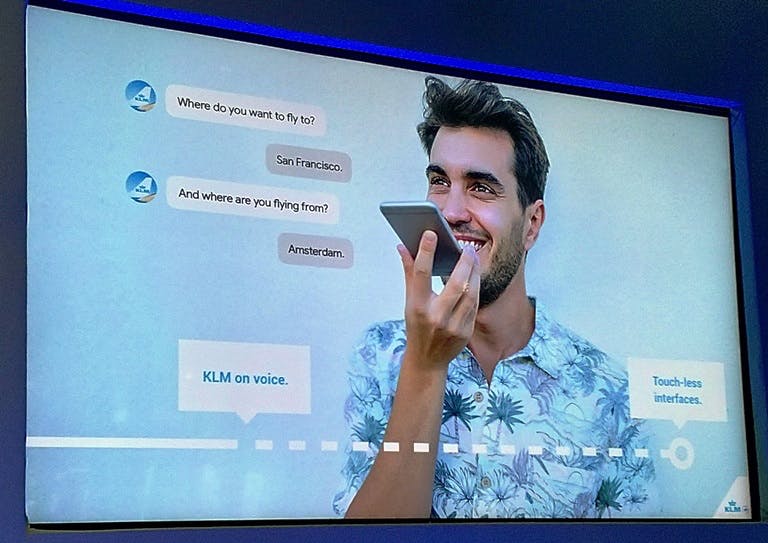 Dutch airline KLM is internationally renowned for its outstanding social media presence, and in particular, its excellent social customer care.