While the ‘holiday’ period now stretches from Black Friday all the way through to New Year, many brands still choose December to get us well and truly in the Christmas (and gift giving) spirit.

Christmas is a time typically associated with alcohol-induced merriment. However, Budweiser has bucked the trend in recent years, instead taking the opportunity to promote its alcohol-free offering.

To mark the launch of its non-alcoholic beer in 2017, Budweiser rolled out ‘Budweiser Prohibition’ – a campaign created in partnership with the Department for Transport and its ‘Think!’ initiative.

Involving a number of out-of-home and digital ads, it was designed to convince consumers not to drink and drive over the festive period. Budweiser also hosted a giveaway of Budweiser Prohibition, whereby vouchers could be redeemed at Tesco stores across the UK.

A different approach from Budweiser, it made for a refreshing (and worthwhile) campaign amid the onslaught of other booze-related marketing. 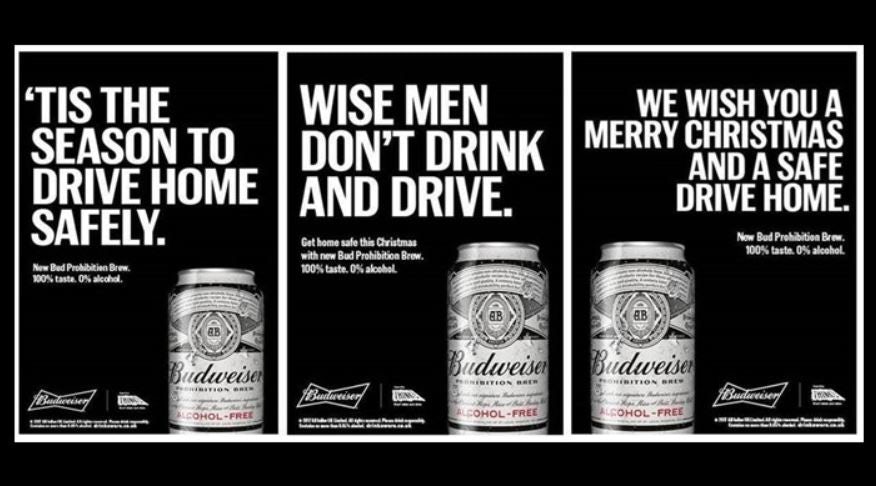 TikTok, the short-form video app, has launched its first marketing campaign in the UK, just in time for this Christmas.

The premise of the app is to the create and share short-form video content direct from mobile. Involving digital, out-of-home, and social media elements, the campaign is designed to encourage users to create their own Christmas-themed content based on a number of challenges and hashtags found on the app.

The first – depicted in the below creative – is #notachristmastree, which users can interpret it whatever way they like. Short and memorable, it’s a fun and quirky campaign designed to mimic the spirit of the app itself.

John Lewis and Buster the Boxer

It’s hard not to mention the big guns in a Christmas round-up. Of course, John Lewis in particular has become synonymous with this time of year, largely thanks to its annual festive advert. There’s been a few hit and miss efforts over the years, but Buster the Boxer is arguably one of the best, mainly due to the wider multichannel marketing campaign that went with it.

As well as the ad itself – which told the story of trampoline-loving Bouncer – the campaign involved an immersive virtual reality experience at the John Lewis flagship store in London. Viewers could also enjoy a 360-degree film on YouTube, and get involved on Snapchat with a bespoke Buster lens.

With John Lewis also rather shrewdly creating merchandise related to the ad (with some of the profits being donated to the Wildlife Trust) – the campaign truly captured the nation’s imagination, making it one of the brand’s most memorable ever.

Head over to Snapchat today to transform into #BusterTheBoxer pic.twitter.com/EyG1c40fBd

Not everyone is able to spend Christmas with loved ones, with many people having to work or even travel on the day itself. In recognition of this, KLM hosted a ‘bonding buffet’ in 2016, which brought together twenty travellers of different nationalities for Christmas dinner at Amsterdam’s Schiphol airport.

The aim was to “translate its figurative spirit of connection in a literal format”, as well as to encourage people to get off their phones and laptops and interact with those around them. The result made for a heart-warming video, which effectively brought to life the spirit of the holiday period.

Mulberry put a fashionable spin on the ‘Twelve Days of Christmas’ in 2017 with its digital and social media-focused Christmas campaign. The luxury brand released a short film promoting its seasonal gift collection, set to the classic Twelve Days, but updated for a modern audience by all-girl indie rock band, The Big Moon.

Alongside the ad, Mulberry also used Instagram to mark the twelve days of Christmas, highlighting each of its gifts in the brand’s high-end editorial style.

It was a simple campaign, but with a steady stream of Instagram content, the brand ensured that it would be front-of-mind for consumers on the look-out for luxury gifts over the festive period.

“My True Love Gave to Me”: Part three of our festive film features seven swans-a-swimming, eight maids-a-milking, nine ladies dancing, and compact versions of Darleys, Zipped Bayswaters and Amberleys – proving good things come in small packages. ⠀ Watch the full film by clicking the link in bio or visit mulberry.com and sing along with us, you know the words! ????⠀ .⠀ #MyTrueLoveGaveMeToMe #MulberryGifts⠀ Video: @CharlotteMWales⠀ Music: @Commoonicate . Enjoy Free Delivery until 3rd December.

Waitrose is another brand that invests big in Christmas marketing. Interestingly, the brand has also chosen to incorporate influencer marketing this year, partnering with a number of online personalities to spread the word on social about its ‘Too Good to Wait’ campaign.

Working with influencers like Lily Pebbles and Anna Newton, the brand’s Christmas food range is featured in a number of sponsored videos, promoting the idea that festive grub should be enjoyed throughout the month – not just on Christmas Day.

Allowing each influencer creative control over the videos, while ensuring that the brand’s key messages are still relayed, Waitrose has ensured greater reach and engagement outside of the traditional TV audience. 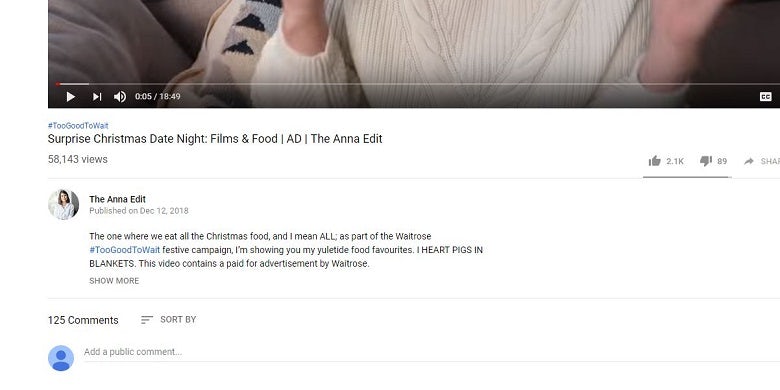 Another campaign from 2018, this time from nut brand KP Nuts, based on the premise that it is an understated yet fundamental part of the British Christmas spread. The campaign involves OOH displays and digital ads reminding consumers to include KP Nuts in their big shop, with creatives exclaiming things like “No one’s driving home for vol-au-vents”.

Alongside ads, KP Nuts also included an experiential element to the campaign, launching an ‘ultimate Christmas jumper’ pop-up shop in Soho on 14th December. The day was also Save the Children’s official Christmas Jumper Day, which meant the brand promised to donate £10,000 to the charity as well as proceeds from sales.

The jumper in question was a KP Nuts special, adorned with rows of nuts that could be torn off and replenished as needed. Just what everyone wants for Christmas, surely?

This week, KP Nuts will launch a festive campaign in partnership with @savechildrenuk . In the run-up to Christmas Jumper Day, we’re giving you the chance to win the ultimate Christmas jumper. Take a look at our KP Nuts' Facebook page to find out more #KPChristmasJumper pic.twitter.com/2O63OF6HXn

McDonald’s ‘Reindeer Ready’ advert from 2017 proved to be such a favourite with consumers that the brand has brought it back a second time. The original ad featured the heart-warming story of a little girl dedicated to saving a carrot stick for visiting reindeer.

The campaign, which was designed to evoke the excitement that surrounds the run-up to Christmas, also heavily involved Snapchat, where users could unlock a Reindeer Lens as well as play a special ‘Carrot Run’ game. McDonald’s even launched a ‘Reindeer Ready’ brand app, which enabled users to overlay an AR reindeer onto an image of their own living room.

Combining traditional storytelling with innovative technology, it was an inspired example of festive marketing from McDonalds UK.

Is it too late to do SEO for the holidays? 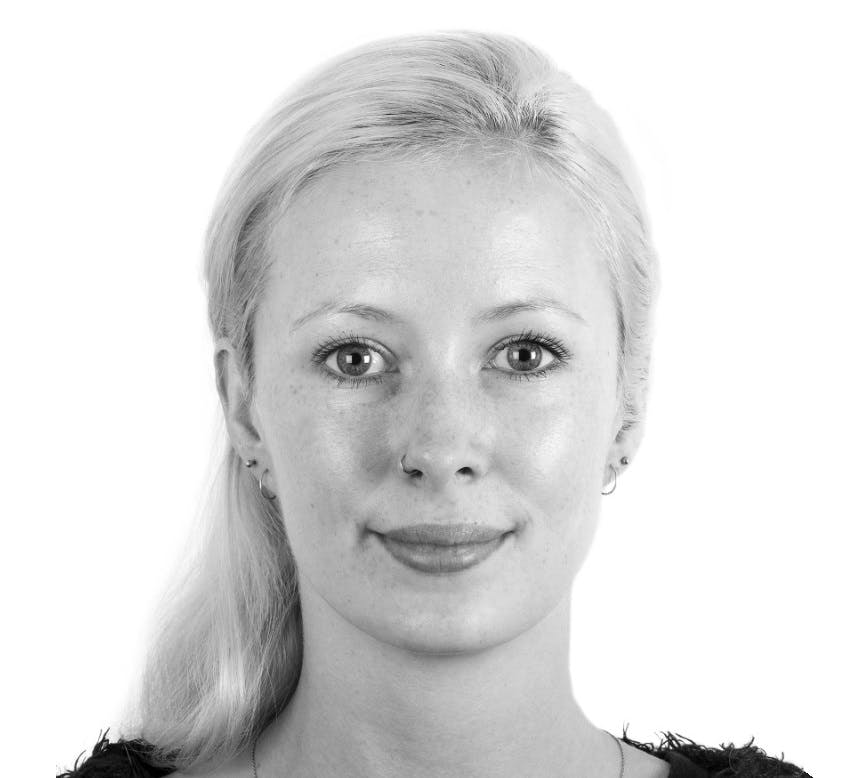 Marketing in 2018 is increasingly scientific and data-driven, with an emphasis on research and testing, hard quantitative data, and incorporating skills and techniques from scientific fields. 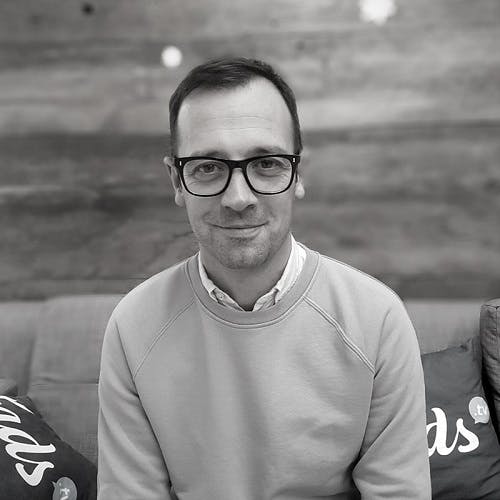 Jonathan Lewis is Global Head of Teads Studio, an interactive creative and data platform for advertisers. 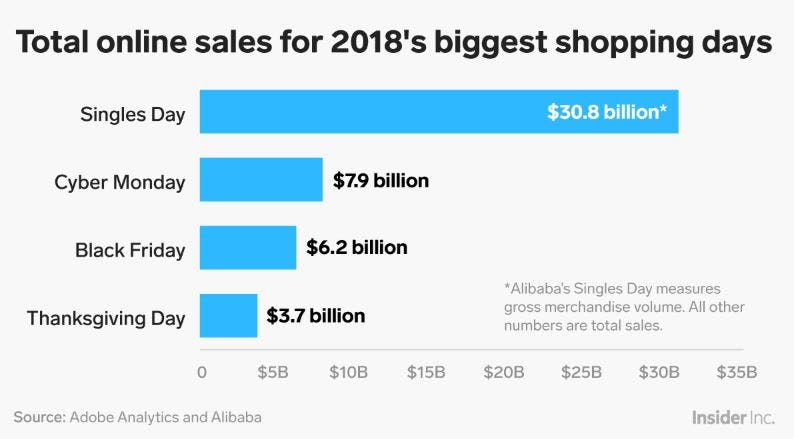