Whether or not the clothes are wearable… well, that’s beside the point. Here are a few of my favourites from over the past few years.

For more on this topic, readers can explore:

There’s been a surge of socially conscious campaigns in recent years, as consumers look to brands to do more than just sell. It’s a tricky balance to get right, as the likes of Pepsi showed with the failure of its Kendall Jenner ad.

The fashion world can be sceptical when it comes to shouting about important causes, especially considering relating issues like the environment and sustainability. In 2017, however, Jigsaw decided to break the mould, basing its print, social, and digital marketing campaign around the importance of immigration in fashion.

Called: ‘Love Immigration’, it was a bold and evocative celebration of diversity within British fashion, and the values of openness, love, and collaboration that the brand strives to uphold.

As well as winning praise from both consumers and other fashion brands, it was named as Marketing Week’s campaign of the year. 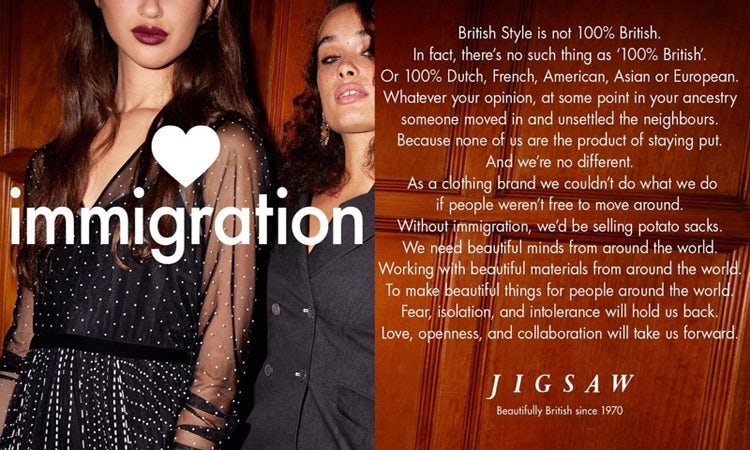 2. Ted Baker’s Keeping up with the Bakers

Ted Baker has a history of innovative and inspiring campaigns, including experiments with Instagram stories and a shoppable video directed by Guy Ritchie.

For its spring/ summer campaign in 2017, Ted Baker pushed the boundaries even further with ‘Keeping up with the Bakers’ – an eight-part sitcom that played out episodically over Instagram. Users were encouraged to come back daily to partake in daily challenges which were released with each episode.

Alongside this, it also unveiled a 360 degree shoppable film, which allowed users to browse the Baker’s home and purchase items discovered there.

With Ted Baker traditionally taking on a different narrative for each passing season, Keeping Up with the Bakers has certainly become a standout, creating a fully immersive world for consumers to explore.

We’re always writing about Nike on the blog, and with a back catalogue that reflects its strong brand identity, there’s a good reason why.

2015’s ‘Better for It’ campaign is one of the most memorable in recent years.

Depicting the inner thoughts of women during sporting activity, it highlights the correlation between sport and self-esteem, and cleverly hints at how what we wear can also have a bearing.

With a light-hearted but empowering tone, it succeeded in engaging female consumers.

How fashion and beauty brands can stand out on Instagram

Hermès’ microsite, La Maison des Carrés, was set up to showcase its popular selection of scarves.

Instead if simply encouraging visitors to buy online, it aims to bring to life the history and artistry of the brand.

With its beautiful design and superb attention to detail, it entices visitors to get lost in its world of illustration.

While we have previously pointed out that Hermès’ website might come across as self-indulgent (and therefore off-putting to consumers), there’s no denying that this part stands out for its creative and original approach.

Alongside Chanel News, Inside Chanel is a microsite dedicated to telling the story of the brand – a key part of its overarching marketing strategy.

Separated into 12 chapters, each detailing an important part of the brand’s history, it offers something of real value for consumers.

Combining photography, digital sketches and video – it uses rich content to bring the story to life.

With 100 years of history, the in-depth and well-produced nature of the campaign also reflects the quality of the brand.

We recently wrote about why women are talking about H&M’s latest campaign, but its ‘Close the Loop’ ad is another example of the brand’s innovative marketing.

With the aim of promoting its mission to make fashion more sustainable, it created one of the most diverse ads of all time.

By creating a buzz around the campaign, it ensured that its message of sustainability was heard.

Nasty Gal has an ethos of self-empowerment and discovery, which is nicely weaved into all of its marketing campaigns.

As well as being the title of founder Sophia Amoruso’s self-penned book, the hashtag #girlboss is also the title of the Nasty Gal’s separate content hub.

Alongside long-form articles on fashion and general lifestyle, it is also the home of Girl Boss radio – a podcast where Sophia interviews various women who have made their mark.

A great example of a multi-channel campaign, it reflects the core values of the brand while subtly promoting it.

A number of fashion brands have released shoppable magazines, and while Net A Porter’s ‘The Edit’ is often cited as one of the best, Swoon for Monsoon proves that it’s not only an approach reserved for high end brands.

Hosted on its main website, the campaign comprised of digital magazines that could be accessed on web, tablet and mobile.

Including visual elements such as GIF’s and video, there were also contributions from influencers to ramp up engagement and consumer interest.

A sleek slice of shoppable content – it was also a great example of how to integrate editorial elements into ecommerce.

Using social media as the driving force for its Autumn/Winter campaign, Marc Jacobs took to Instagram to do a bit of model scouting.

For the chance to be featured in his Autumn/Winter campaign, it asked followers to tag a photo of themselves using the hashtag #castmemarc.

As well as creating awareness of the brand, it was successful in giving consumers and fans of the brand a memorable and potentially valuable experience. Lacoste is a brand with a long history, having been founded in 1933 by tennis player René Lacoste and André Gillier.

Its heritage is the basis of its 2017 short film, Timeless, which uses a time jump feature to take viewers on a visual journey through its fashion past.

It also uses a narrative arc to do this, telling the story of two star-crossed lovers who are pulled through multiple decades in a single train journey. Combining nostalgia, urgency, and intrigue – it packs a lot into less than two minutes.

How has the overwhelming shift to online impacted retailer returns strategies?