Convincing clients, or ourselves, of the value of mobile traffic is an on-going struggle. Conversion rates on mobile tend to be lower, which leads to a tendency to value mobile traffic less and invest less in it.

Based on our clients, we see an average conversion rate of 3.7% across desktops and tablets versus just 1.9% for mobile. We know that some of those mobile users must be returning later via other devices and converting, but how to quantify this?

Coming to enhanced AdWords campaigns in the next couple of months will be the ability to track users across devices, so we will finally be able to draw some solid conclusions on this matter.

This kind of tracking will only work for the minority of users that are signed into their Google account across each device used, and we’ll have to assume that this sample will be more or less a fair representation of website traffic as a whole.

In any case this will give us much more insight into mobile’s overall contribution than we currently have.

While the majority of advertisers await this release, other options are already available, such as Drawbridge, which tracks users across devices by probabilistically matching desktops to mobile devices for the same user based on anonymous user behaviour. Mainly this is the ads that have been served to each device.

Note that even perfect cross-device tracking wouldn’t give us the whole picture. There is also the influence that mobile visits have on in-store footfall.

There are a few proposed solutions out there to tackel this, but none are ideal or particularly advanced. For example, the ultra-simple method of just asking your customers (“tell us you’ve been on our website and get 5% off”), to more advanced systems such as generating a unique code for each user that will get them a discount which can be tracked back to their web session.

Since their introduction in 2011, Product Listing Ads have had a major impact on many of our ecommerce clients, with many accounts drawing a significant proportion of their sales and revenue from them.

Now that the free listings are being phased out in favour of the fully paid model, this means much more potential paid shopping traffic, which I suppose is good news for agencies, but not necessarily for the website owners who are losing out on a source of free clicks.

But it’s also going to mean more competition and so inevitably higher CPCs (good news for nobody but Google).

It may also lead to advertisers having to re-evaluate the contents of their feeds: previously there was no reason not to include the full inventory of a site’s products, but if all listings are paid, then performance must be taken into account.

So perhaps very cheap products, those with small margins and those that aren’t as price competitive may need to be removed from the feeds or at least targeted differently. For shoppers, this shift should definitely be advantageous.

Previously some advertisers may not have cared all that much about the quality of their feeds at all since they were all free. Now that they are paid it will force people to take a better care with what they’re showing, how often listings are refreshed and other quality factors. Therefore users should see better quality listings.

If nothing else, an important lesson to learn here is not to over-rely on any one aspect of your campaigns for performance, as Google could up and throw a spanner in the works at any moment.

Google may have trumpeted every year in this decade so far as the year of mobile, so is this going to be it? Or as some people believe, has it already been and gone?

Regardless, it’s easy to see why Google keeps trying to promote mobile: although mobile CPCs are increasing, they are still significantly lower than desktop clicks.

Across our clients, we’re paying on average 22% less per click on mobile, so increasing smartphone usage is going to drag the overall CPC down somewhat. In light of this, Google are bound to want to stimulate more competition amongst mobile advertisers.

The latest development is Google’s merging of desktop and mobile devices within its recently launched enhanced campaigns, driven in part to simplify campaign management by reducing the need for duplicated – or triplicated – campaigns.

While there are some drawbacks to this enforced merging of mobile and desktop, most notably the lack of ability to turn off or adjust bids on tablets, it does make mobile campaigns easier to keep up-to-date, so it’s likely that advertisers will start focusing more on mobile. In which case, we can expect the competition and hence CPCs to rise.

Although this is a bit of a vague concept, it is pretty much just what it sounds like: focusing marketing on the needs of users, rather than fixating purely on the keywords, devices, ad texts, placements, etc.

This may manifest itself in various ways: for example, through the new AdWords enhanced campaigns, for which one of the official raisons d’être is to target one customer across a variety of contexts, as opposed to just looking at the devices that users might be using.

Remarketing, whether via the GDN, Criteo or another network are all about putting yourself in your visitors’ shoes and thinking about ways to entice them back to your site with different ad copy or keywords.

Other methods of display targeting such as by demographic group or Interest category also tap into this train of thought. This latter targeting option can be included with remarketing under the umbrella of ‘audience targeting’, and it means we care less (if at all) about the specific websites where your ads are appearing, or even about the content of those pages.

Instead, you’re targeting people based on trends and patterns in their browsing history, so they could be looking at anything at the point where you’re serving them your ad. Of course this relies on us having done the analysis beforehand to determine which audiences are the most likely to convert.

The typical ‘premium’ ecommerce site converts at around 2%, but this is based purely on the primary (or macro) conversion which in the case of an ecommerce site is going to be a sale.

However, if you focus just on sales and ignore the other 98% then you’re missing out an opportunity. The challenge is how best to extract value from the other 98% of visitors?

Unless the whole 98% immediately bounced, then there should be some way of teasing them apart, to discern which traffic sources are driving the most valuable traffic.

This may be done via micro-conversions, which might take the form of secondary goals such as signing up to an emailing list, creating an account, or adding an item to their basket or wishlist. Certainly such conversions are weaker than online sales, but do give some real indications of the value of your traffic, even where the primary conversion hasn’t been achieved, and thus give us something to optimise towards.

Micro-conversions might also take the form of engagement metrics. For example, a visitor that viewed over a dozen pages of your site and stayed for over 10 minutes is surely more valuable and likely to return later and convert than another user who stayed for just a few seconds.

Google Analytics can be used to track engagement goals such as these, and the resulting conversions can be imported into AdWords and used as a target for optimisation.

Whichever micro-conversions are chosen, analysis will be necessary to ensure that they do actually have a correlation with sales values. If someone is on the site for 10 minutes then it may mean that they’re really engaged.

However, it could also mean that your site takes ages to load or is unintuitive and hard to navigate. If using multiple micro-conversions, a scoring system could be used to weight each type by importance, to build up a model of user behaviour and value.

For example, account creation might be worth 100 points, whereas as ‘time on site’ metric might only be worth 10. Focusing on these micro-conversions and working out how to value them helps us draw value from 100% of your visitors, not just the 2% that completed the primary conversion.

Though the introduction of new engagement metrics is exciting, focusing on foundation metrics (available to retailers for years) still make big a impact on conversion rates.

One such series of foundation metrics is the analysis of site search, understanding what people are typing into your websites search box and their behaviour afterwards. 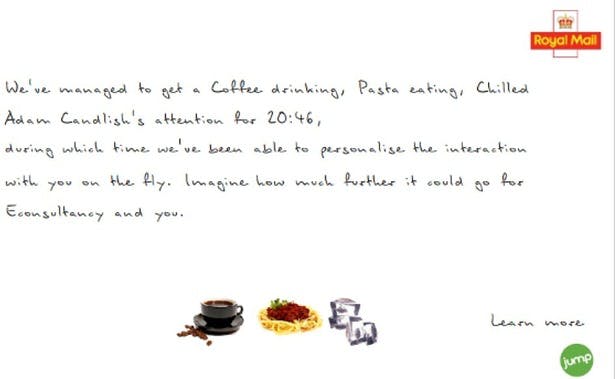 There are just two days left to get your entries in for our new digital marketing and ecommerce awards, #TheDigitals, so to give some last minute inspiration I’ve rounded up six examples of effective multichannel marketing campaigns.

It follows a recent post that flagged up five great examples of email marketing excellence.

To avoid any accusations of bias, these are all examples that fall outside the eligibility period for the current awards, but should give an idea of the type of campaigns and projects we are looking for. A recent CEB study of nearly 800 marketers at Fortune 1000 companies found the vast majority of marketers still rely too much on intuition, while the few who do use data aggressively for the most part do it badly.

According to a another recent study, 77% of CEOs have trouble linking marketing efforts to tangible results, such as revenue, shares and conversions.