It’s not just a case of setting up at a festival or street market either – many brands are staging large-scale and long-running events. And unlike experiential marketing, which tends to catch consumers off-guard in public spaces, consumers are increasingly seeking out these experiences – and even paying for the privilege.

So, who’s been doing it and what have they achieved? Here’s a few examples and the reasons why they work.

Gin brand Bombay Sapphire launched an immersive drinking and dining experience this summer, designed to take consumers on a journey of gin discovery. Set inside a stationary train in East London, it involved ‘exploring’ 10 different locations – each corresponding to the different botanicals that make up Bombay Sapphire gin.

In order to enhance the experience even further, the brand partnered with top chef Tom Sellers, who created bespoke dishes to pair with each drink. Running for just a week, the event (which was priced at the rather reasonable £30) was featured in various London-based publications including Time Out, meaning it generated a good amount of hype in the run-up. The limited-run and somewhat exclusive nature of the event helped to increase its appeal, as well as enable Bombay Sapphire to create a connection with those who invested in tickets. Campari has staged a few pop-ups in recent years. In 2016, it launched its very own bar in celebration of the #RediscoverRed campaign, where it also partnered with a number of existing London bars to promote its drink.

This year, it’s taking this activity one step further with a masterclass event on a narrowboat during London’s Design Festival. Called ‘Campari Creates’, it is designed to evoke the sights and sounds of Milan’s famous Navigli district. Attendants will be able to create their own Campari cocktails, as well as learn all about the history and heritage of the brand.

Rather than straightforward sampling, the masterclass-element elevates it to another level, allowing consumers to become much more invested and immersed in the brand. In turn, it also means it’ll be all the more memorable. Similarly, instead of a one-way marketing campaign, consumers will feel like they are getting something of real value (rather than being overtly sold to).

US drive-in restaurant Sonic was just one of many brands to capitalise on the PR opportunity that is Coachella. Instead of a standard pop-up store, it launched a rather unique campaign to promote its line of premium milkshakes.

Recognising that the main reason anyone does or buys anything at the festival is so they can post it on Instagram, the fast food brand created a special square shake for that very reason. As well as the shakes being square (to fit the Instagram photo box), the ingredients were too. What’s more, they were available to order on the platform via the ‘Shop Now’ button, being delivered to festival-goers thanks to a geo-fence that was placed over the area. While perhaps more of a gimmick than a brand experience or activation, it’s still a good example of a brand bringing a product to consumers in a fun and creative way.

In fact, it achieved two separate objectives. Firstly, it introduced the brand’s new premium range to consumers – arguably more effectively than standard ads might. Secondly, it increased social engagement on Instagram, raising the brand’s number of followers by 11,000 and generating over 26,000 likes. Social media engagement is certainly one of the biggest benefits of branded events, with most consumers naturally willing to share their experience online. As well as showcasing the product itself, brand experiences can also be a great way to promote a set of values. Tequila brand Patrón is one of example of this. Its ‘Secret Dining Society’ event was created in partnership with Douglas McMaster – a chef from zero-waste restaurant Silo.

This aimed to reflect Patrón’s focus on social responsibility, with the food promoting less waste and greater creativity, involving mainly plant-based ingredients to pair with corresponding tequila cocktails. For guests, it offered the chance to get to know a brand in a way that they might not have previously considered, with the event reinforcing Patrón’s commitment to environmental and social issues.

Again, it also resulted in positive feedback on social media, with consumers posting reviews about what they had learned and enjoyed.

More than your average brand experience, the Guinness Storehouse in Dublin has gone on to become a fully-fledged tourist attraction. In fact, it was selected as Europe’s best by the World Travel Awards in 2015.

Serving as a cultural museum as well as a brewery tour, it offers visitors the chance to get involved in a number of activities. One of the most impressive is the ‘The Tasting Rooms’, designed by experience specialist Bompas & Parr. Based on environmental factors that are said to enhance flavour perception, the room is designed to reinforce particular elements of the beverage. Meanwhile, visitors can learn techniques to drink it correctly, as well as inspect architectural and design elements inspired by its ingredients. Side note: Bompas & Parr is just one of the brands to feature at this year’s Festival of Marketing (which you can buy your tickets for here).

The most impressive thing about the Guinness Storehouse is how much it now also benefits the city as a whole. Forbes suggests that over 50% of visitors to Dublin visit the Storehouse, 92% of whom are from foreign countries. When you compare it to something like M&M World in London’s Piccadilly Circus, which is largely just a vehicle to sell chocolate to tourists, the amount of innovation and creativity that goes into it is evident.

What can we learn from these examples? Here’s a quick summary.

1. Make it exclusive. By running its event for a limited amount of time, Bombay Sapphire effectively generated hype and excitement, ensuring that consumers would snap up tickets before they sold out.

2. Offer value. Instead of just sampling products, Campari gives consumers something of greater value by teaching them about the legacy of the brand as well as the general topic of cocktail-making.

3. Encourage social sharing. One purpose of a brand experience is to enhance positive perception, which naturally increases as a result of user-generated content. By designing something specifically for Instagram, Sonic ensured this would naturally occur.

4. Make people think differently. Events are also a great way to change consumer perceptions – or even just be more creative. You might not expect a tequila brand to focus on social responsibility, but Patron was able to portray this unknown aspect of the company via its dining event.

5. Think like a consumer. The multi-dimensional Guinness Storehouse is designed to leave a memorable impression on visitors. By thinking about what would make the experience enjoyable from a visitor’s perspective – not how it sells the product – it has gone on to become a must-see tourist destination, even for those who aren’t necessarily big fans of the drink.

When it comes to the opportunity for customer engagement, the travel industry already has a head-start – because who doesn’t get excited at the prospect of going on holiday?

But while travel consumers might naturally be more inclined to engage, this also means there is greater opportunity for brands to get it wrong. Delays and disruptions might mar a travel experience, but how a brand deals with it can make or break a customer relationship. 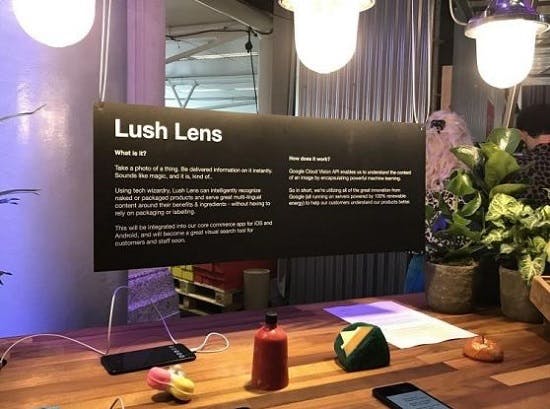 Lush isn’t one of those places you suddenly decide to pop in to for some bubble bath.

It seems you’re either a Lush devotee, or you tend to give its (rather odoriferous stores) a wide berth. As someone who falls in the latter category, I felt like a bit like a fish out of water at the Lush Creative Showcase this week.