Put simply, performance marketing is the term we use for any online advertising campaign where the advertiser and affiliate or publisher are only paid when a conversion takes place (e.g. a click, a download or a purchase).

Here we’ll take a look at five case studies where a brand has successfully used performance marketing in the last 12 months.

House of Fraser began working with Rakuten Attribution on its affiliate campaigns after discovering the channel was in decline.

They identified large discrepancies between the valuation of individual publishers and the commissions being paid to them. It was also revealed that valuable content sites were not receiving commissions on the sales that they were contributing to under the ‘last click wins’ commission model.

Some of these sales were particularly valuable as they were made by new customers. House of Fraser decided that it wanted to use an attribution model to calculate publisher payments as well measure marketing performance. Hence, complete alignment of commission payments with their valuation.

As well as enabling a publisher to be paid commission on a proportion of a sale, this approach could also see multiple publishers being paid for a single sale.

House of Fraser developed an automated daily feed from Rakuten Attribution to the affiliate network that contained transaction details for individual transactions.

The network processes the feed and creates commission transactions in their systems, which are treated in exactly the same way as their standard transactions.

The difference being that the commissions now follow a weighted model based on their contribution, and will include more publishers for each transaction.

The insurance market is a fiercely competitive landscape and the challenge for any finance merchant is how to deliver efficient sales growth in such an environment.

In 2014, The Direct Line Group took an innovative approach to this challenge with its Churchill brand.

The core focus for its performance marketing channel has been to drive growth forward while reducing the reliance (and risk) on the traditional volume drivers, namely: cashback and voucher codes.

To address its objectives successfully, the entire marketing mix had to be correct and so working with Tradedoubler the planning focused on four simple areas: Place, Product, Price and Promotion.

In total the campaign generated 800 quotes and 300 new customer sales, exceeding the targets by 50%.

Throughout the campaign MoneySavingExpert delivered sustained activity the generated more than 8,000 clicks, a substantial 400% increase on the average click activity.

Conversion rates from quote to sale increased to 38%, from 12%.

Through advanced audience profiling techniques they identified that although the core FT readership remained largely in the 45+ yrs demographic, the fastest growing segment within new user acquisitions was actually far younger which pointed to a new growth market.

Based on readership and conversion rate insight, they also realised that subscribing to The FT requires a longer consideration cycle to less expensive products. This means that the path to purchase is longer and requires a higher frequency of messaging to deliver conversions.

The audience were unlikely to subscribe after simply seeing one online banner ad. Through data analysis of existing performance, they identified the optimum frequency to reach this particular audience was seven exposures, far higher than the average frequency cap applied to other campaigns.

A media consumption map of the target consumer was developed which included all of the media touchpoints users would engage with through out their day.

Visits doubled on the mobile site, there was an 82% average view completion of video media placements and the rich media displays were twice as effective in driving assisted conversion than standard Direct Response.

In 2014, Waitrose.com began an initiative to increase the efficiency of its digital marketing channels by gaining a deeper understanding of the effect they had on the business.

With this goal in mind, Waitrose.com worked with Infectious Media to define and measure the true value of its display activity and develop an entirely new way of optimising its campaigns to maximise the impact of the channel.

The first step was to define ‘impact’ within the context of display and it was agreed that this should be defined as measuring conversions that would not have occurred without the display campaign.

This would allow them to focus on increasing volumes of these ‘incremental conversions’, to deliver an uplift in revenue without increasing budgets and reduce wastage.

By analysing this data it enabled them to measure, report on and optimise directly towards conversions caused by its programmatic display activity, ignoring users on whom it had no impact, ensuring that it was maximising the revenue seen on site and minimising the wastage caused by non-viewable and low frequency ads.

This led to a significant uplift in revenue from incremental conversions over the three months, despite a flat budget.

As part of a long term digital strategy, VW looked to improve personalisation of all digital communications by using targeting to deliver more test drives via personalised messages.

To do this, VW first set up a targeting and segmentation decision tree in order to make bespoke journeys for consumers. This helped analyse the consumer journey throughout its site so it could then create bespoke segments of consumers.

VW then developed display messaging for these groups to drive the user through to the next stage of the purchase funnel. This messaging referenced the exact model/offer the user had previously seen, encouraging them to take the next steps towards a test drive.

In creating this structure it changed the way VW planned its display media and creative, which has historically focused on non-response-lead messaging and imagery.

It moved from contextual, site specific buys into a dynamic RTB and programmatic strategy, which focused on increased efficiencies in buying, audience targeting and delivery of creative.

Since implementing the personalised strategy, cost per named lead has dropped by 26% and delivered three times the volume of named leads.

It also reduced the overall cost per lead (including car configurator and finance calculator) by 33%.

If you are also responsible for a terrific performance marketing campaign, then enter The Masters of Marketing awards, brought to you by Econsultancy and Marketing Week (closing date September 23).

Uber proved that applying new technology to an old industry is a recipe for a successful startup. 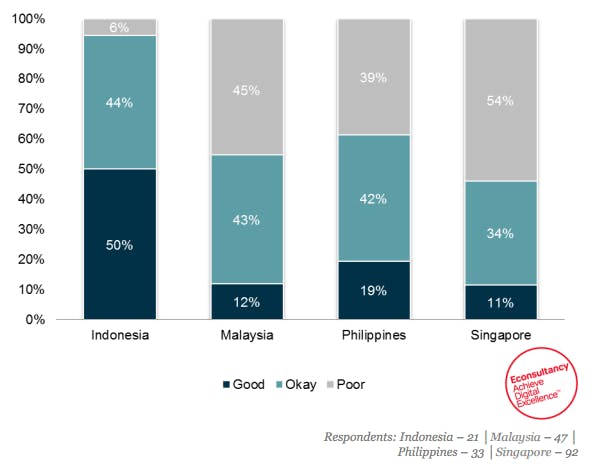 There are now more than 200m active social media users in South-East Asia, this is equivalent to one in three people using social to various extents.

The market is ripe with opportunities, offering organisations tremendous potential to deepen relationships with consumers and create positive conversations.

With almost two-thirds of marketers employing advertising for brand campaigns, it’s clear: programmatic is top of mind for many digital marketers.