As internet-connected devices proliferate, the IoT offers marketers new opportunities and challenges when striving to connect with customers.

Subscribers can read all about the IoT in one of our latest reports, A Marketer’s Guide to the Internet of Things – but everyone can see highlights of the report in an upcoming webinar.

On Thursday, September 20th, Econsultancy will be hosting a webinar (Asia-Pacific time zones) about the IoT which features a special guest from the IoT industry, Ajit Aras, Executive VP at Sharp Corporation, and you can sign up for your free spot here.

To give you a flavor of what the webinar will cover, here are five surprising facts about the IoT which we uncovered while researching the topic.

While the IoT sounds futuristic, the first IoT device was connected to the internet over a decade before the first WWW browser was launched.

The motivation for the start of this groundbreaking leap in technology was straightforward: Engineers at Carnegie Mellon wanted to know whether a nearby Coke machine had their favorite drink and, more importantly, was it cold? 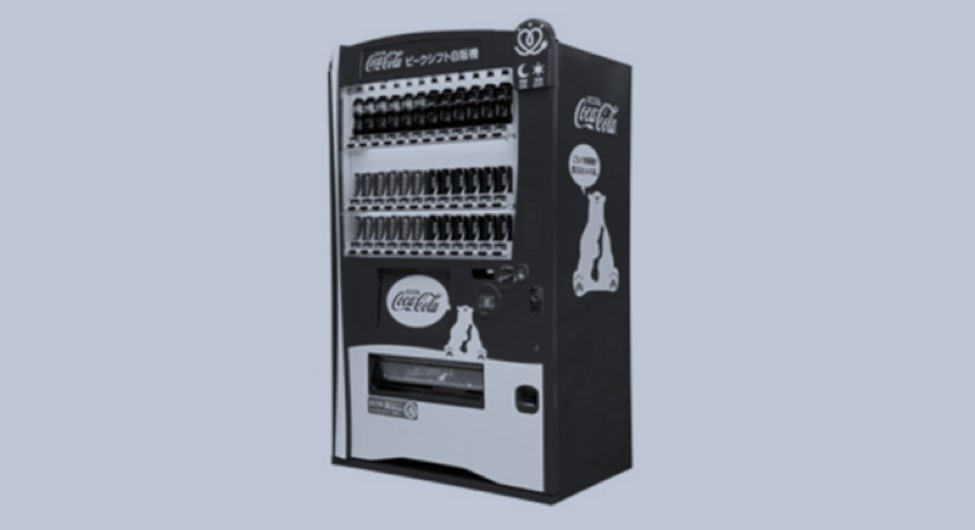 To address this pressing issue, they connected sensors in the machine to the internet and provided a text-based interface so that anyone with the Coke machine’s internet address could, from anywhere in the world, know the machine’s contents and temperature.

While it sounds somewhat trivial, this application of the IoT illustrates the basic principle of the IoT. People want to leverage our advances in information technology to know what is happening the real world, as well as in cyberspace.

Another surprising fact is that while the IoT feels like an emerging internet application, it is now, and has been for some time, bigger than the web itself. 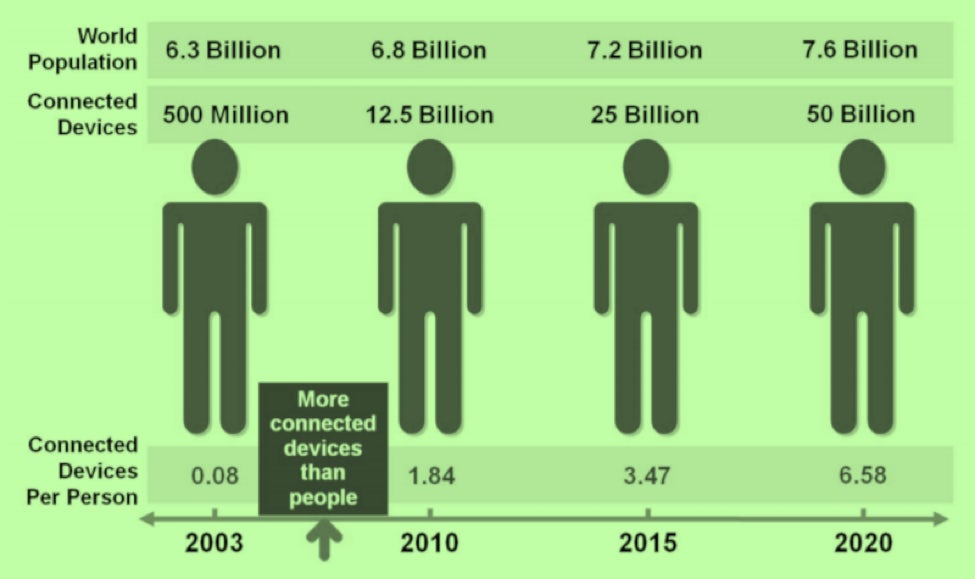 Current estimates are that there are around 10 billion devices connected in 2018 and that will at least double by 2020.

As marketers, we tend to hear a lot about wearables, beacons and other consumer-oriented applications of the IoT.

But, according to a report by GrowthEnabler, the IoT market is dominated by three sub-sectors: Smart cities (26%), industry (24%) and health care (20%). 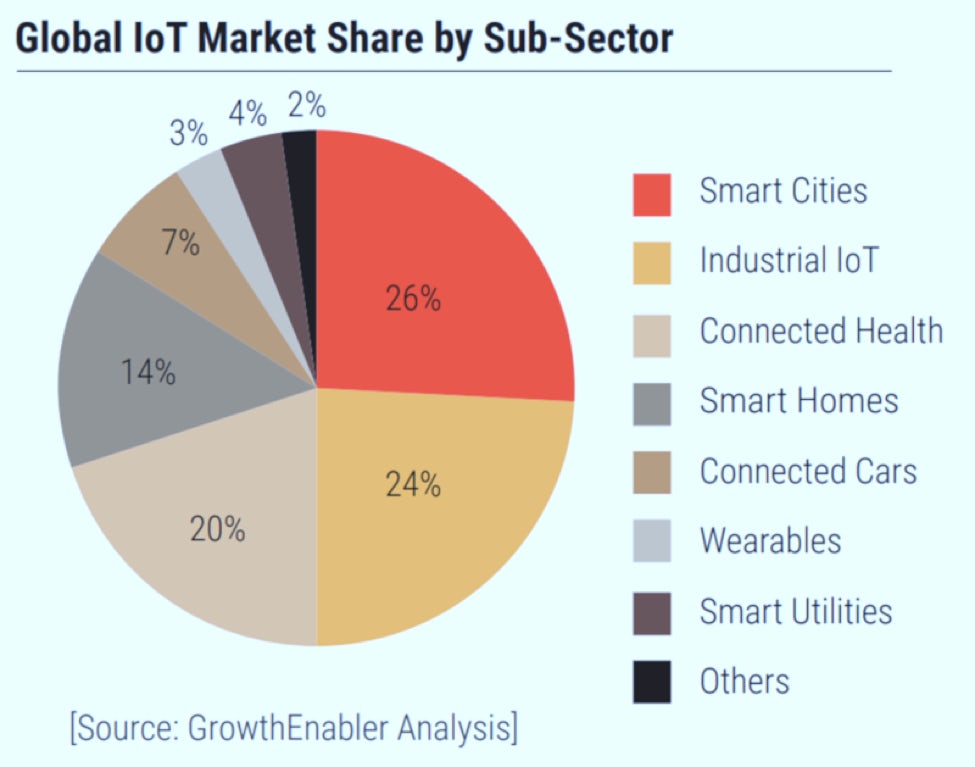 Marketers should take note of this statistic and adjust their IoT strategies accordingly.  That is, instead of looking at ways to push marketing messages through consumer technology, they should seek to integrate their product or service into IoT devices in one of these three areas.

The upcoming webinar (sign up here) covers many of these applications of IoT and offers suggestions on ways marketers can take advantage of the IoT proliferation in the leading sub-sectors.

One of the limiting aspects of the IoT is that the sensors required to collect data and deliver it via the internet require electricity.  This either means that IoT deployments must either have a wired connection to a power source (somewhat defeating the purpose) or require occasional battery replacements.

Scientists, however, are making great strides in developing ‘powerless’ IoT sensors which do not require mains electricity or batteries to function.  Instead, these sensors are powered by light (such as the one pictured below), heat, vibrations or even radio frequencies.

Marketers should keep one eye on these developments and come up with innovative ways that these fuss-free sensors can be deployed to improve their products or services.

5) There is an IoT hairbrush

Perhaps the most interesting IoT device which we encountered during our research is the IoT hairbrush designed by L’Oréal.

Dubbed the ‘Hair Coach’, this internet-connected brush uses a microphone to detect hair-brushing patterns as well as sensors which analyzes brushing patterns.  Data on its user’s hair brushing habits is collected, uploaded to the cloud and summary statistics are made available via an app.

Hair audits are conducted after each brushing session and corrective measures, which often include Kerastase shampoo recommendations, are provided to its user.

While the product was announced at CES in 2017, no release date has yet been set for this fascinating application of the IoT!

For more amazing facts and advice on how marketers can use the IoT to build their brands, tune in to our webinar on Thursday, 20th September (Asia-Pacific time zones).

A Marketer’s Guide to the Internet of Things 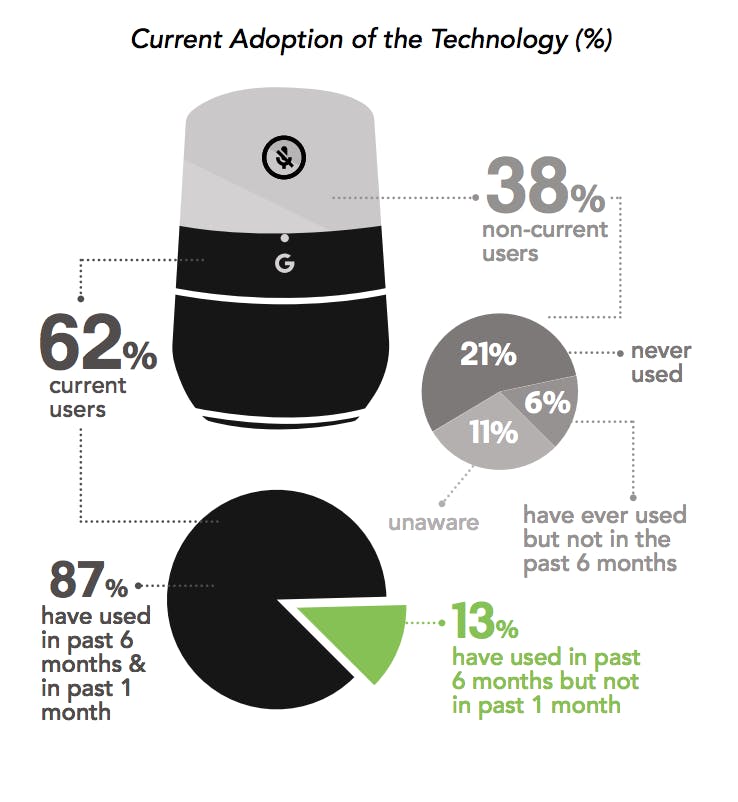 This month’s digital marketing stats roundup from Asia Pacific includes plenty of insight into that most topical of subjects, voice search. We also bring some information on the state of Indian digital marketing, CMO budgets across the region, and priorities of consumers (privacy or convenience?). Let’s go…