Australia’s JB Hi-Fi is an interesting exception. Besides just focusing on sales, it has devised a digital marketing strategy which gets more reach and engagement than it would achieve by blasting out offers on social channels.

To explore what it’s doing, I’ll start with the JB Hi-Fi website and then take a look at its presence on each of the social networks.

JB Hi-Fi’s website is a sophisticated ecommerce engine which is designed to make it easy for you to shop, buy things, find stores, and open an account. All of this is fairly standard stuff for an online retailer. But one interesting thing about the site is that it uses a chaotic visual style which is more like a newspaper flyer than a website.

Perhaps this is to give you the impression that it is making rash decisions when slashing its prices, which gives you a great deal unavailable elsewhere.

Whatever the motivation, the site is visually engaging and highly-branded in a way which could carry over nicely into social media.

On the front page, JB Hi-Fi provides links to its social media sites and the first, and clearly most important, link is to Facebook. It has 671,000 likes on Facebook, posts daily and enjoys organic reach in the thousands, even if it doesn’t promote the content.

JB Hi-Fi does brand its page and posts, but the ‘newspaper flyer’ branding is difficult to replicate in the more-structured setting of Facebook. JB Hi-Fi has a few types of posts, one of which is product videos which typically get thousands of views and hundreds of likes.

What is more interesting, though, is that the posts also get hundreds of shares. This is great for the brand as Facebook has made it quite clear that posts with high engagement will be seen in more News Feeds than posts with low engagement. JB Hi-Fi also gives away stuff in exchange for comments in the post.

Again this is now an effective way to increase the engagement on your posts, but I suspect that Facebook will not factor in this sort of engagement in their ranking algorithm in the future.

Interestingly, though, the giveaways in return for comments are relatively low-value. For the big-ticket freebies, you have to sign up to an email list. The reason for this is that an email address will not only let them email you, but they can also upload it to Facebook, build a custom audience and then advertise to you on Facebook later at very low cost.

And a side note on its email capture… JB Hi-Fi uses the Facebook App framework to collect email addresses so you don’t have to leave the platform in order to give your email. Very smart, and I’m surprised we don’t see more brands doing this.

Lessons from Facebook: Likes are great, shares are better, but save your most valuable giveaways to get your customers’ email address.

JB Hi-Fi posts most of the same offers on Twitter, but enjoy far less engagement despite having 24,000 followers. Typically, tweets only get a couple of re-tweets and a few favorites.

Of course it’s possible that JB Hi-Fi is able to generate some great traffic from Twitter and I’m sure followers like getting deals in their Tweet stream. But besides just being able to tell people about the products you’re selling, Twitter also offers brands a great opportunity to participate in a conversation with fans.

Have a look at how Taco Bell (@tacobell) used Twitter recently: For those who don’t know, @JakeFoushee is a famous, young YouTube star with a large Twitter following. Using VMA tickets as a ‘hook’, Taco Bell was able to start a conversation with him and in the process, reach hundreds if not thousands of his followers and look witty and fun in the process.

Lesson from Twitter: Try using it to engage with fans and see if you can get in a conversation with someone with a large Twitter following for more reach.

Perhaps you wouldn’t think of YouTube as a natural place for an electronics retailer, but JB Hi-Fi does it very well, despite having a relatively low amount of followers. It has a lot of up-to-date product videos with links back to the ecommerce site. This is a very wise strategy.

People search endlessly for products on YouTube to learn about them and how to use them, and so having product videos on your YouTube page can result in valuable ecommerce traffic for the products people are searching for.

And with nearly a billion unique visitors every month, YouTube is becoming as important of a search channel as Google for shoppers. But also, JB Hi-Fi is trying out a content marketing strategy. It posts how-to videos on some of its products and shows local artists performing in-store.

These do have lower engagement than the Facebook contest posts, sure, but the video views are great long-form content which will result in higher awareness of what products and services JB has.

For example, after seeing How to Tune an Acoustic Guitar viewers not only know that JB has guitars and tuners, but also that it has employees who know a thing or two about musical instruments.

And with that knowledge, those few thousand viewers can be brand ambassadors the next time one of their friends is looking for a guitar.

And finally, JB Hi-Fi’s quietest social network Google+. Here JB Hi Fi has just over a thousand fans and has only made a minimal effort. It pretty much just reposts videos from YouTube on the page. But nowadays, this is not a bad strategy.

There is so little engagement on the channel that it’s probably not worth putting much effort in to Google+. But then again,who knows – you may find a person or two who uses it as their go-to social network in which case you will be seen above people who don’t post.

One interesting thing is that the design here works well with a fashion brand but JB’s anarchic visual style is all but lost in the sleek, minimals world of Google+.

So one other thing we can learn here is that when you are choosing a social channel, try to find one which reflects your brand’s style.

Google+ lesson: Might be worth a minimal amount of effort, just in case.

Overall, JB Hi Fi have a coherent social media strategy which ties in well with the goal of both selling products and building a brand.

They could probably do more personal engagement in order to benefit from the reach of its networks but in comparison with other electronics retailers though, JB is up there with the best. 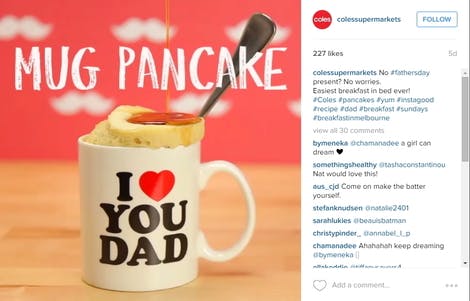 In a recent financial report, Coles attributed part of its success to innovation in its website.

Coles Online is indeed impressive. But how does its social media strategy compare?

Online store locators are critical for bricks and mortar brands, so why are so many making fundamental errors that significantly hamper their performance in local search?