The BBC Three documentary has generated a huge wave of positive feedback since it aired, with many influencers and well-known media personalities sharing their own experiences with trolling. It’s also been suggested that the documentary be shown in schools in order to teach young people about the dangers of online bullying (and how to deal with it).

Alongside this, many high-profile names have also called for more to be done by social media platforms, the government, as well as the brands that partner with influencers who are targeted.

So, what exactly is being done, if anything? And how should brands tackle trolling on their own social media channels – and those belonging to the influencers they work with?

A call for greater regulation

Since ‘Odd One Out’ aired, a number of celebrities and influencers have shared and signed an online petition, which was created by TOWIE personality Bobby Norris.

Titled “Hold online trolls accountable for their online abuse via their IP address”, the petition calls for social media platforms, such as Twitter and Instagram, to block the IP addresses of people who continuously troll people online. As it stands, trollers can simply create another email address and continue the same behaviour, even if they’ve previously been banned from an account.

Norris’ petition requires 100,000 signatures in order for parliament to consider it for debate. Since Jesy Nelson’s documentary brought the subject back into the limelight, it has reached 124,872 signatures.

we did it!!! 103,843 as of right now!! let’s keep the signatures coming, lets send a big message that this is not ok anymore.. !! https://t.co/fmh6RSeoKk pic.twitter.com/fssuLibMQy

Even more recently, celebrities including Rachel Riley and Gary Lineker have backed a separate campaign, based on the Centre for Countering Digital Hate’s (CCDH) report, ‘Don’t Feed the Trolls’. The initiative promotes ignoring trolls and taking time away from social media, suggesting that defending yourself is a ‘trap’ that only feeds them further.

This is based on the theory that trolls do not want to win or lose an argument or even prove themselves right – they only want their ideas to be heard by as many people as possible.

What can social media platforms do?

The “Don’t Feed the Trolls” report suggests that social media platforms actually benefit from online trolling. This is because the storms that arise from this type of behaviour boost overall ‘time spent online’ – which is a core metric for platforms like Facebook.

The report states: “When social media companies publish and therefore promote “trends” they act as publishers, not simply as platforms.” Consequently, CCDH recommends that social media platforms need to take far greater responsibility for their part in modern society, and to take a number of steps to reduce and combat damaging ‘trends’ that promote or include bullying behaviour.

One example is to “develop a mode that works across devices that reduces notifications to the bare minimum, causes human moderators to scrutinise the activity and take proactive action against bullies.”

Another recommendation is to include richer data in notifications about who is communicating with users, to help identify bots and spam accounts (which can in turn reduce the damaging affect of bullying or abusive messages).

It’s hard to tell yet whether these suggestions are viable for social media platforms. However, we have seen positive developments with similar features in the past few months. In July, Instagram announced a new feature (powered by AI) that alerts people when their comment may be considered offensive before it’s posted.

In theory, the user has time to reflect on the comment, and potentially delete or edit it. Alongside this, Instagram announced that it is working on another feature called ‘Restrict’, which controls the visibility of comments from certain accounts (but does not notify the troll of any changes). 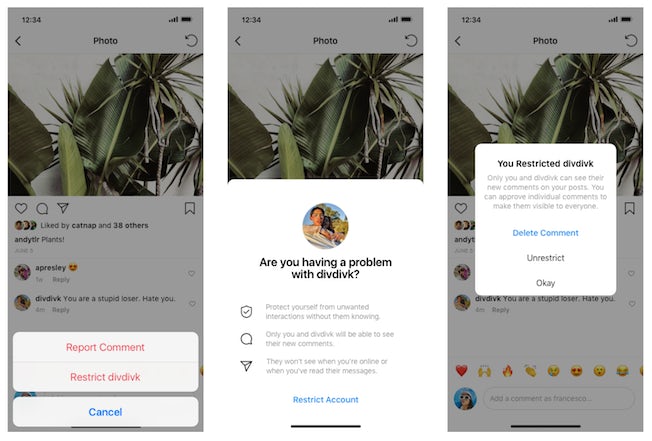 Of course, these measures won’t be an instant solution to an extremely widespread problem. Interestingly, Head of Instagram Adam Mosseri recently told Time magazine that the platform is also “reassessing the core incentives” that lead to strife, such as users “trying to prove their place in the social hierarchy” (i.e. getting likes) “by tearing others down”. Hence Instagram’s recent removal of the like button.

However, with recent research finding that engagement and follower growth for influencers is down since its removal, changes like this are bound to bring forth a dilemma for many within the industry.

The impact on influencers

Online abuse is a murky topic, of course, and certainly raises questions about the nature of free speech and what constitutes trolling (and what doesn’t). Despite the potential for reduced engagement, however, people within the influencer marketing industry largely seem to want social media platforms to act, with many highlighting their own mental health struggles as a result of trolling.

This caption has nothing to do with this image but on Friday night I watched Jesy Nelson from Little Mix tell the awful story of the online trolling she has had to go through since winning the X Factor. And I felt compelled to share a little more of my own story. I had just got married to my best friend and just bought our dream house, we should have been living our best lives. But for me, the sadness inside of me was overwhelming. What you wouldn’t have seen was the days I spent sleeping on the sofa, waking up and crying and then falling back to sleep for days at a time. And yet this was supposed to be everything I ever dreamed of. I always wanted to work in fashion and beauty, I always hoped I’d make a success of myself so much so that my parents and family would be proud of me, but it cost me my happiness for a very long time. Over the last almost 3 years I’ve been on a journey which included a number of months of intense CBT psychotherapy and counselling, I forgave a lot of people who kicked me whilst I was down and distanced myself from anything that didn’t radiate positivity, which thankfully led me to a couple of months ago finally feeling strong enough to stand the hell up for myself. I’ll never be able to tell you exactly how bad it got because I still live with the fear of what has been, and is still said to me on a daily basis just because my job happens to be online. I’m scared that if I talk about how bad it got, it could go back to that or even worse, give someone an idea of what they would like to do to me. It’s sad that I have to live with that just because I film segments of my life, what I’m shopping for and chatting about beauty products. A few days ago a petition was sent to me over DM which had 2000 signatures and aims to change the way we operate online. For people to be held accountable for what they say and do online which now has over 120k signatures. The link can be found on my stories now ????

The impact can also extend beyond personal struggles, with some influencers also suggesting that trolls negatively impact brand partnerships, and in some cases, even damage careers.

The Saccone-Jolys, a YouTuber family, are one example of this. Anna Saccone-Joly lost her magazine column with Asda on the back of (false) allegations made by online trolls. She has also stopped posting on her own YouTube channel as a result of the abuse she receives, leading her husband Jonathan Saccone to take legal action.

The effect of online bullying can in some cases be catastrophic. Commenting on the tragic deaths of two former Love Island contestants who took their own lives, the Secretary of State for Health and Social Care, Matt Hancock, said: “The sudden exposure to massive fame can have significant impacts on people, and I think that it is a duty on any organisation that is putting people in the position of making them famous overnight, that they should also look after them afterwards.”

In a statement, ITV responded to calls for greater aftercare, saying: ‘The programme will always provide ongoing support when needed and where appropriate. We also discuss at length with all of our islanders before and after the show how their lives might change, and they have access to support and advice to help with this.”

Of course, this doesn’t stop the problem of online trolling itself, only serving to help people deal with it. Consequently, it’s been suggested that influencers’ brand partners need to take on a duty of care, as well as take on the share of blame if there is any negative backlash from an influencer campaign.

So, will we see brands start to stand up for influencers? Directly calling out bullying seems unlikely – especially given the findings from CCDH that suggest this would worsen the situation.

However, putting plans in place for what to do if any abuse happens is more plausible, and we’ve already seen brands do this. Last year, Marketing Week reported how Sport England took a proactive approach to protecting those featured in its ‘This Girl Can’ campaign, providing advice on how to react and also taking action against the perpetrators themselves by intercepting and deleting abusive comments.

With many other brands also taking a stance against bullying and discrimination in advertising campaigns, the general feeling is that ‘enough is enough’.