It is common knowledge that many art galleries and museums are finding it tough to market to younger, digitally-oriented generations.

Although millennials ‘enjoy museums’, they have also ‘expressed concern that the content and mission of many museums may not be in sync with millennials’ interest and values’, according to millennialmarketing.com.

A report by the Department of Culture, Media and Sport (DCMS), revealed DCMS-sponsored museums and galleries saw an overall 0.8% decline in visitor numbers in 2016/17 compared to 2015/16. Many major institutions within this group contributed to this decline, including the National Portrait Gallery (down 11%), the National History Museum (down 14%) and the V&A (down 12%), amongst others.

As a frequent visitor of art galleries in central London, I am often surprised by the lack of interactive digital content to aid learning, exploration and navigation. It is common to find an occasional static touchscreen in a corner, which will contain pages of dry information about certain paintings and collections, perhaps accompanied by a couple of images. This is hardly inspiring, particularly in the eyes of individuals who belong to the millennial and Z generations, for whom technology has become the very centre of their daily lives.

It is obvious that managers and curators need to take seriously the interest and retention of these generations so as to secure a bright future for their organisations. Incorporating digital technology within the physical gallery space is one such way to do this, providing more interactive and engaging platforms from which visitors of all ages can learn.

Whilst it appears that most galleries have a lot to catch up on in this regard, a handful stand out as pioneers of integrating traditional art forms with modern digital culture. I’ve picked out some of the best examples below:

Augmented reality as an aid

The Detroit Institute of Arts is a fantastic example of how organisations can use Augmented Reality to improve both the educational and practical aspects of visiting galleries and museums. They introduced the ‘Lumin AR Tour’ in 2017, which can be implemented on a handheld device available inside the building.

By pointing the device at certain sculptures, paintings and artifacts, you can learn more about them. Pop-up snippets of information, detailed descriptions and additional photographs of the item (and related items) are just a few of the features included to aid further learning. One of the most interesting highlights is the option to ‘x-ray’ an ancient mummy, giving users the ability to view both the exterior and interior of the object in front of them. 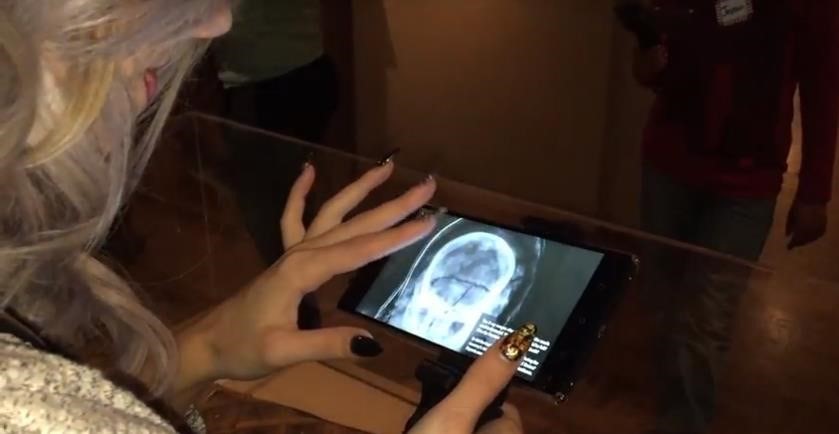 The ‘Lumin AR’ tool can also be used for navigation. Simply touch an area of the interactive map that you would like to visit, and dots will appear on the floor through the screen, guiding you to that area from your current location.

The tour currently functions in seven sections of their gallery space, and the gallery intends to roll it out to the entire site in the near future.

The Cleveland Museum of Art has taken interactivity to the next level with their ArtLens Studio Play. The studio, based in a room within the gallery, contains a variety of screen-based activities that require physical movement of the body to operate.

Throughout the room, some activities you can expect to participate in include:

Although interactive displays are becoming more commonplace in many galleries and museums, they are often produced tentatively and scarcely, with limited capabilities. This example from the Cleveland Museum of Art defies conventions of the standard, arguably dated static touchscreen display by involving the movement of the body as a means of control. Not only is this method more immersive for the user, but it is also a more social and collaborative way of learning more about the collections.

Visitors have the opportunity to create their own works of art which are then uploaded to the gallery’s official Tumblr page to download and share later.

National Museum of Singapore – ‘Story of the Forest’

I was lucky enough to stumble upon this exhibition housed within Singapore’s National Museum when I visited on holiday in October 2017. The installation had quite an unassuming exterior, with very little information about it displayed at the entrance. Regardless of whether this was deliberate or not, it certainly made the whole experience more surprising upon entering. 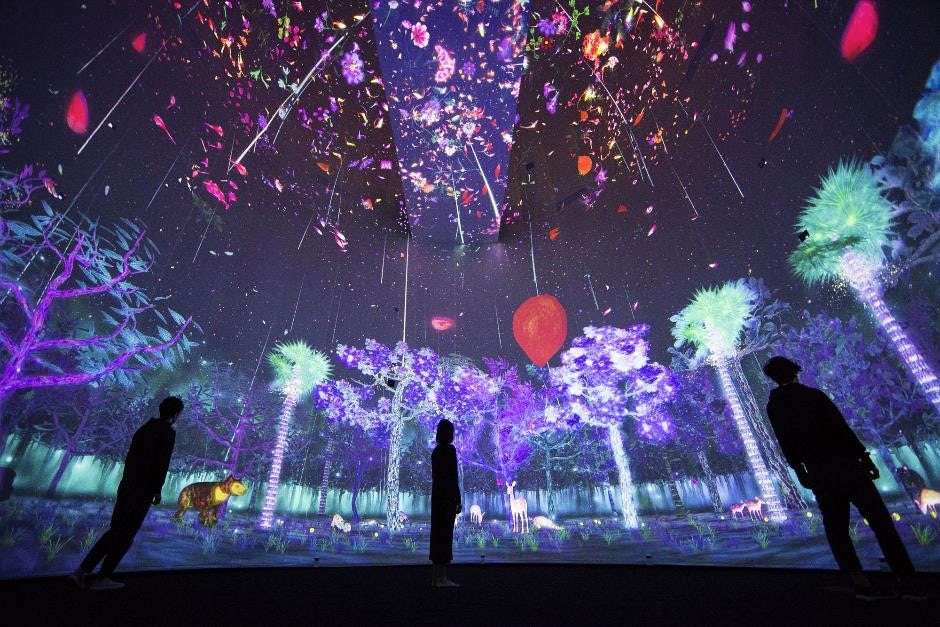 This incredibly immersive and colourful exhibition takes you on a sloping, spiralised walk down to a main dome at the centre. On the walls of the path are large screens that hug the curvature of the walls, making the visuals seamless at eye-level. An animated display of a forest scene is projected from the screens, inviting the viewer to spot various animals in the foreground and background. You can then use the ‘Story of the Forest’ App on your mobile device to find out more about certain animals in front of you, including habitat, diet and levels of endangerment. This can also be performed in the main dome area of the exhibit, where additionally you can lie down and take in a breath-taking view of the ceiling that features cascading spores and plants.

More images can be found on TeamLab’s website – (I’ll save you the holiday photos). If you ever have the chance to visit, I highly recommend it.

Is digital technology part of our cultural organisations?

According to their website, the exhibition ‘is an unauthorised gallery concept aimed at democratizing physical exhibition spaces, museums, and the curation of art within them.’

‘Hello, We’re From the Internet’ was created by a group of eight internet artists at the MoMA in New York City, and used augmented reality to overlay their animated content over the artworks featured in the Jackson Pollock section of the gallery. This content could be accessed through a mobile app available on Android and iOS.

The exhibition has been claimed a protest against elitism that art galleries arguably represent.

As with any establishment – be they media, church or government – the richest of galleries are canonized, to the point where the public’s role and contribution is reduced to passive observer.

If we are to understand that art is the great measure of our culture we must also acknowledge it is owned, valued and defined by ‘the elite’. We must also recognize then that the term “open to the public” is not an invitation, but a declaration of values. Values that are not our own. And so it has remained for 335 years. Until now.

Politics aside, this ‘hijacking’ dramatically increased the popularity of this particular collection, as evidenced by the number of visitors interacting with the app in the video below. It is a risky but interesting way of drawing attention to social issues via virtual vandalisation.

Take a tour in virtual reality

The Google Arts and Culture app, available on iOS and Android is like Google Street View for galleries and places of cultural interest. It can be implemented on mobile devices when viewing selected museum websites, and allows the user to explore highlights or entire floors of these buildings in virtual reality.

Let’s take the tour of the Dulwich picture gallery as an example. You can browse 652 high resolution images of artworks using Google Arts and Culture, which are organised by style, medium and top trending.

Users are also able to take a tour around the gallery’s rooms in virtual reality, with the ability to select images to view in close-up from the room they are currently based.

There is no doubt that this can be appealing to users of the app, particularly if you are on a different continent to the gallery or museum in question. You are transported there in an instant, and can view the gallery at your leisure, without any other visitors getting in the way of your experience.

It could also aid a decision to visit a gallery in real life; for example if you were planning a holiday itinerary, However, it could arguably ruin any later physical experience of the space, as it would be devoid of any surprise elements.

Is virtual access to galleries, and the ability to share images of artwork online extinguishing the public’s desire to visit? It is a possibility, however some argue the opposite.

Jia Jia Fei, Director of Digital at the Jewish Museum in NYC, believes that sharing these images and experiences online actively encourages others to visit those museums and galleries in real life. In a 2015 TedX talk, she speaks about her experience with a James Turrell exhibition at the Guggenheim Museum, where she once worked as Associate Director – Digital Marketing:

Does the rapid digitisation of images reduce the experience you have? Is it reductive, or does it expand the meaning of that experience and object in an entirely new form, thereby reaching millions of people outside of the physical space who can never physically come to the museum?

I’m often asked, ‘will the digital experience and the digital representation of the museum online through social media ever replace the onsite physical experience?’ … the James Turrell exhibition, with an incredible digital footprint, also brought in over 420,000 visitors who wanted to come to the museum to see it for themselves because they saw it on Instagram.

…We’re opening up the opportunity for anyone in the world with an internet connection to learn about art, which is essentially the mission of the museum. 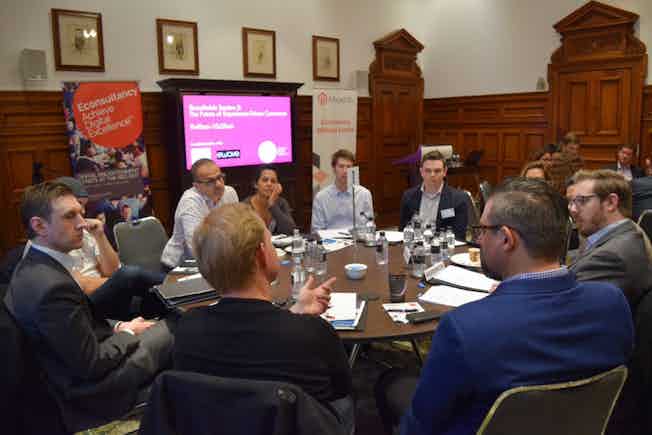 While marketers have been discussing experience-driven commerce for several years, recent acquisitions of ecommerce platforms by the major marketing clouds have led to increased interest in the topic. 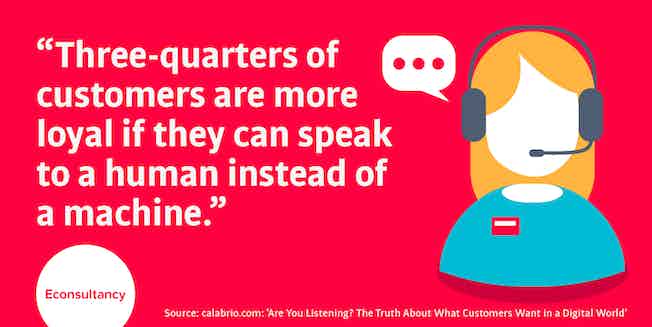 This week’s stats round-up is a real sizzler.

It includes news about customer loyalty, mobile search, Facebook reactions, and ever so much more. Check out the Internet Statistics Compendium while you’re at it, too. 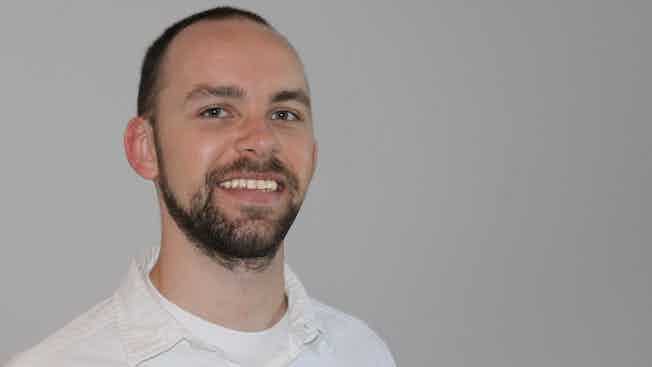 Corey Northcutt is Founder and CEO at Northcutt, an SEO agency for cloud and ecommerce. We caught up with Corey to find out how his business has been affected during the Covid-19 pandemic. 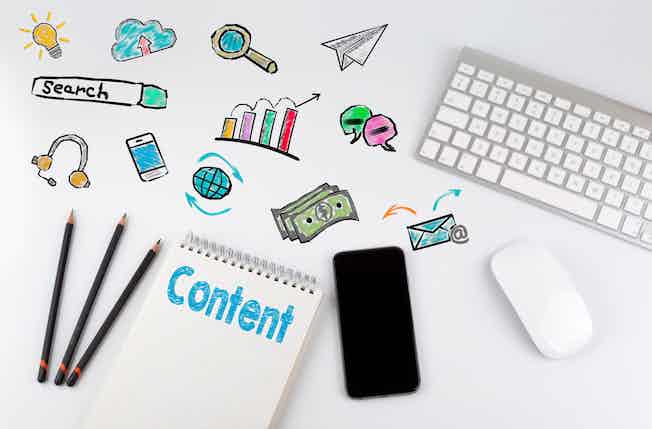 What makes up an effective content strategy? In this article we look at six fundamental elements, and how they can be tackled using the PROSPER framework. This is an excerpt from Econsultancy’s Content Strategy Best Practice Guide.