Once considered by retail relics as a gimmick imported from America, it is now firmly placed on the UK calendar. Last year UK shoppers spent £1.4 billion online on the day after Thanksgiving and 42% of UK retailers said Black Friday was more important than Boxing Day compared to just 29% who said the post-Christmas sales were more commercially significant.

Whilst news channels will want to show the clichéd hysteria in supermarkets and electronics stores it is far more likely orders will be calmly placed on an individual’s phone. Last year, according to IMRG, 39% of online sales occurred on a smartphone, a bigger proportion than on desktop. The takeaway from last year’s buying frenzy was that online sales were up (11.7%) – whilst fewer shoppers hit the high street.

Irrespective of your opinion on the ever-growing event – with analysts expecting over half of the UK population to get involved this week – now is the time to ensure your readiness for the promotional event of the year!

At Chelsea Apps Factory, our research indicates that many mainstream retailers are severely underprepared for an increasingly mobile Black Friday.

The traditional SEO keyword rankings of recent years clearly haven’t filtered down to the App Store, where major firms aren’t as visible as you might think. When we analysed retail app data to see how companies had optimised their discoverability on the App Store, the interesting finding was that the big-hitters of the industry weren’t very discoverable at all for the key phrase ‘Black Friday’.

Using this key phrase, only two well-known retailers show up in the top 100 results on the App Store this week – JD Sports and Adidas. Astonishingly, a raft of smaller apps have better optimised their results for the term: users will come across somewhat incongruous apps like Cat Tsunami and 1000 Top Bollywood Songs before seeing a major name like Asos or John Lewis.

However, whilst we should appreciate that consumers’ browsing habits on the App Store are different to their use of Google (i.e. users are less likely to search for generic terms when downloading an app compared to behaviour within search engines), terms like ‘discounts’ and ‘deals’ are still likely to receive an App Store search.

Loyalty and voucher apps regularly outperform well-known retailers on the App Store: UNiDAYS, a student discount app, has an estimated 2.3 million monthly active users on iOS – more than four times Asos’ estimated figure, according to data from Appscatter/Priori Data. This is despite the latter being the UK’s leading online-only clothes retailer. 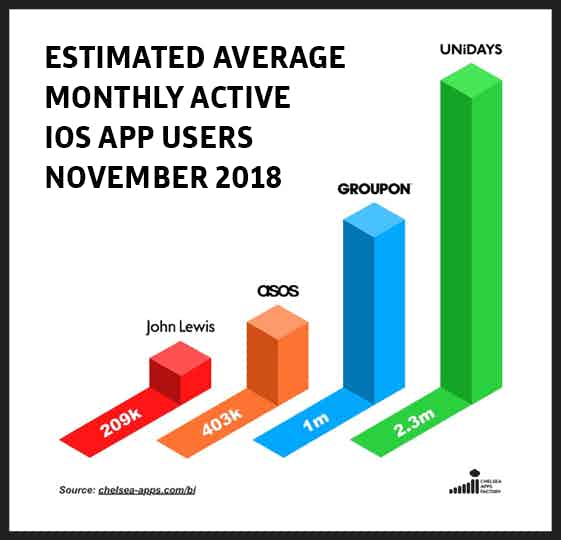 Why is this a problem? – because UNiDAYS will take an affiliate commission on referrals to Asos or other sites.

More importantly because the prominent real estate on these voucher code apps / websites are traded just as aggressively as Forex and can be as volatile as cryptocurrency, therefore “sales at risk”!

Affiliate business Latest Deals appears to have seized the initiative and launched its own Black Friday app. Its Android version is estimated (Appscatter / Priori) to have seen a 366% increase in downloads in the last 7 weeks and a retention rate of 7.2% of its customers after 30 days – far higher than ordinary retailers.

In fact, mainstream retailers can learn a lot from the loyalty that voucher apps and other discounters inspire in their customers. John Lewis is by no means translating its renowned brand loyalty onto its mobile platforms. In fact Appscatter data estimates the number of people still using the app after 30 days is just 1.6%. VoucherCodes, on the other hand, is estimated to retain more than 4% of their customers after the same period.

Ultimately, major brands are failing to carve themselves a niche and demonstrate their relevance on mobile platforms.

Since the smartphone is the number one way that people will be making purchases on Black Friday, how can retailers make sure they don’t miss out, or that a load of their traffic doesn’t come through voucher code apps?

What can retailers do to get their apps ready?

In the short term, retailers need to make their involvement in Black Friday more discoverable on the App Store. Offering well-publicised deals and discounts directly through the app can boost revenue and reduce the amount they pay to third-party sites.

Retailers must also be able to withstand the demand increases on the day itself. If an app goes down for one minute, customers will go elsewhere. There are simply no second chances on Black Friday.

Longer term, retailers ought to take a leaf out of the voucher apps’ book, incorporating sleek UX and intelligent incentive structures that boost user retention.

This Black Friday is going to be a retail event to remember, as will next year’s! It’s absolutely essential that retailers use every tool at their disposal to get their share of the billions that will change hands.

Retailers need to have an understanding of:

Is your app ready for Black Friday? 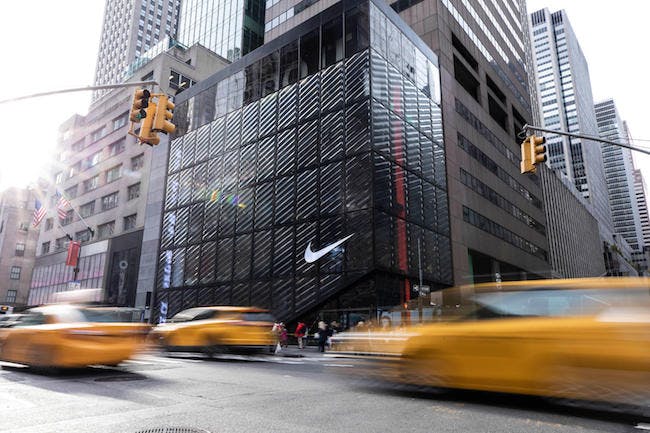 Nike’s latest flagship store has arrived on New York’s Fifth Avenue, and with it comes a glimpse into the future of retail. An oft-trotted expression maybe, but the ‘Nike House of Innovation 000’ (its official title) is deserving.