There are endless statistics that hammer home the importance of online reviews.

Today, 85% of people are said to trust online reviews more than they do personal recommendations, while customers are reported to spend 31% more on companies who have excellent reviews.

Be present on multiple review sites

There are many places brands can collect reviews. After experiencing a disappointing meal, I recently mentioned to a friend that the reviews of the restaurant I had read were ‘hit and miss’. They, however, responded by saying that they’d all been great. It turns out we had checked out reviews in different places (OpenTable and Google Reviews, respectively).

What does this mean for brands? Well, while it certainly highlights that not all reviews are trustworthy, it also shows that not everyone has the same preference when it comes to third-party review sites.

As a result, brands (who want to encourage reviews outside of their own site) should consider having a presence in multiple places, meaning that customers can pick and choose the site that they feel most affinity with or are already comfortable using. 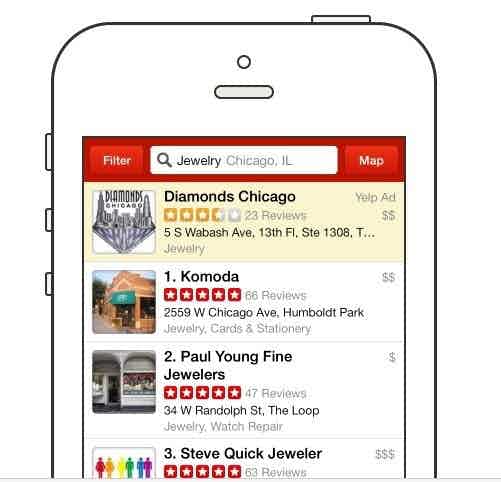 Give options (and guidance)

As well as choosing where to review, it’s also important to give users options on how to review. This means including multiple methods, including options for both detailed reviews as well as short and snappy feedback – emojis to indicate satisfaction or disappointment can also be an effective tool.

This way, consumers who do not have the time or inclination to leave lengthy reviews won’t be put off.

Another useful tip is to provide users with guidance on how to review – i.e. a form that asks specific questions about a product. This is because, when presented with a blank box, users might feel stumped or uncertain how to go about leaving a review. In contrast, giving guidance can prompt customers to take action, and even leave more detailed feedback than they might have otherwise considered doing.

Modcloth’s review form is a great example of this, with the brand filling blank boxes with guidance on what it would like to hear about. 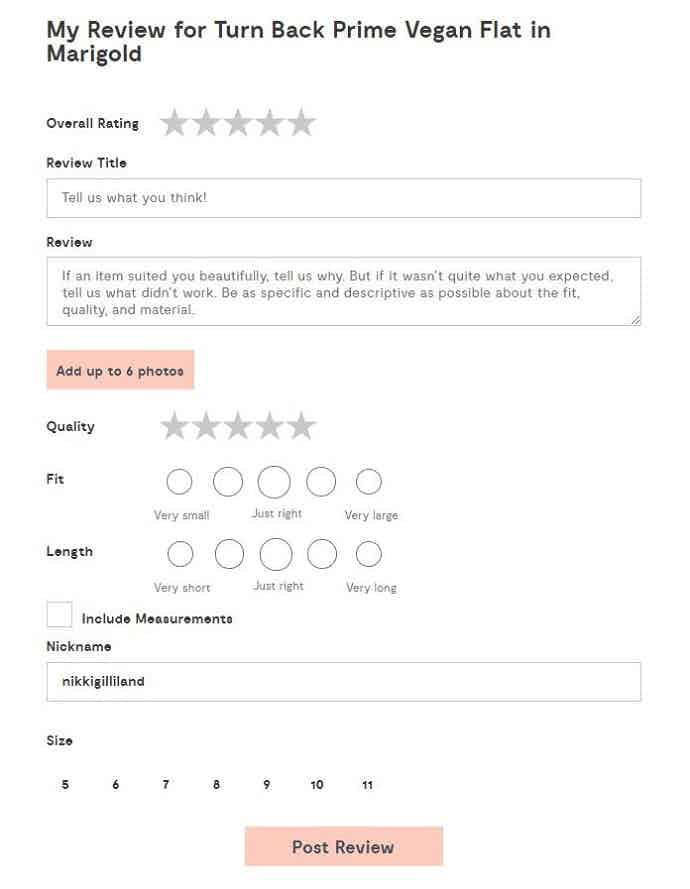 In the past couple of years, the growing prevalence of fake reviews has somewhat diluted levels of trust in brands’ authenticity. Last year, it was reported that fake reviews were getting out of hand on Amazon, leading the site to put a stop to its incentivised review scheme.

One way for companies to combat this is to highlight trustworthy reviews. This can be done by labelling users as ‘verified purchasers’, which signifies that the person has actually made a purchase online. Victoria’s Secret does this on its ecommerce site, alongside other indicators of advocacy for the product. 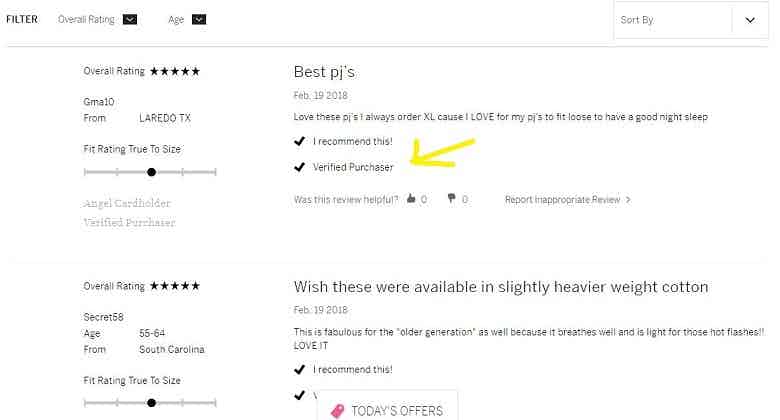 It might sound counterintuitive, but another factor which helps to instill trust is to allow negative reviews as well as positive ones. Interestingly, a study by the Journal of Consumer Research found that politely-worded negative reviews can even improve the way a consumer perceives a brand. This is likely to be due to the fact that small amounts of negativity help to make a brand sound more human, as opposed to a faceless business.

Negative reviews also give brands the opportunity to respond (in a measured and friendly way), which can also help to instill trust.

A recent study has also highlighted the benefits of swiftly replying to online reviews, suggesting that doing so can help to increase a brand’s overall rating. The study was specifically looking at TripAdvisor, but I think the theory might still apply to reviews in general.

From the analysis of thousands of hotel reviews on the platform, it found that businesses who responded received 12% more reviews, and their ratings increased by a small but significant margin.

The study also found that consumers who read reviews with replies are less likely to leave negative reviews of their own, perhaps to avoid an awkward interaction or simply because their perception had changed from the brand’s respectful response. 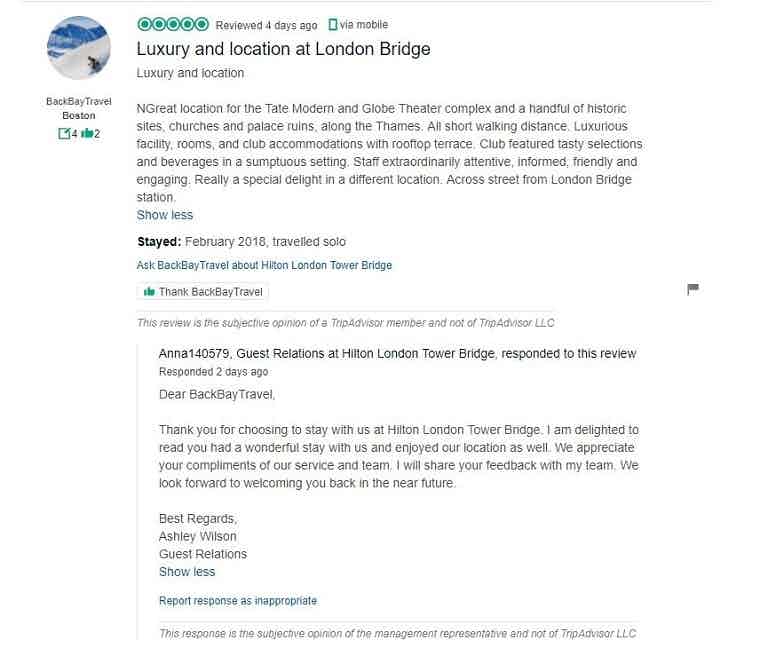 Make use of social

While most brands encourage review on their own sites, social media is also a worthwhile tool for gathering feedback. Local businesses in particular can benefit from Facebook reviews, with the site gaining ground in the number of reviews left in the past few years. A recent study from Search Engine Land found that Facebook received 71% more reviews in 2016 than it did in 2015.

Facebook star ratings are also now visible from Google search, meaning users can gain an immediate indication of how a brand is performing.

Elsewhere, Twitter can also be a helpful tool for gaining more immediate and specific feedback from customers. For example, coffee-chain Costa asks users what they think of its festive cup design, giving them the opportunity to voice their opinion, and helping to inform future decision-making for the brand.

It’s clear that online reviews can instill trust and enhance a brand’s reputation, but the benefits do not stop there. Reviews can be used as a tool for improvement, as well to help brands discover potential ambassadors.

While social media influencers are typically used to promote brands, ambassadors (or advocates as they’re also known) can offer greater authenticity. This is because they do not usually get paid for endorsement, and their genuine love for the brand is based on past experience.

So, if someone leaves particularly enthusiastic or regular feedback, it can be hugely worthwhile reaching out and gauging whether they’d be happy to work as an ambassador. Brands that do so are more likely to create a cycle of advocacy, with real-life happy customers increasing the likelihood of others leaving reviews and so on. 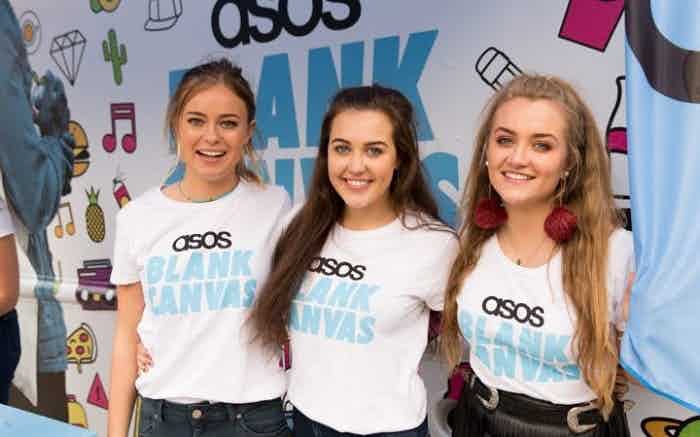