Since the dawn of cinema in 1895, we’ve been watching horizontal screens – at home, at work and in theatres.

But with people holding their phones vertically almost 98% of the time vertical has become the new way to view video. And it’s opening up creative new ways for brands to engage their consumers.

Last year, it was estimated that people spent an average of 29 minutes a day watching video on a mobile, compared to just 19 minutes a day on a fixed device. Think about how you use a phone – portrait is the default orientation. This means that brands need to think vertical to reflect the ways that consumers are naturally consuming their content.

Brands that caught on to the vertical video trend early are already seeing results. For example, Mercedes Benz was one of the first to experiment with ads in Instagram Stories. Making the most of the vertical frame, Mercedes Benz used stacking and split screen techniques to show off its C-Class Cabriolet to full effect.

But this is a rapidly growing space, with over half of advertisers purchasing vertical video ads last year – a figure I expect to rise in 2018 – brands will need to approach creative content from new angles to compete for consumer attention.

With this in mind, there are a few guiding principles to make the most of vertical:

Formats such as Stories work particularly well in multiple scenes, as people move through these mediums quicker than ever before. Instagram has just introduced carousel ads in Stories, giving advertisers the ability to have up to three pieces of media per Stories ad to create multiple scenes and richer storytelling. Use this time wisely by getting your brand seen in the first three seconds, and reward consumers by creating a compelling, holistic story.

Remember that this kind of format is still relatively new, and evolving as quickly as consumer tastes, so take risks and experiment with it to grow your brand and following. The ephemeral nature of Instagram Stories make this much easier as content disappears after a short time. Warby Parker has a consistent track record for playing around with new content formats. For example their early adoption of curating and re-sharing user generated content allowed them to learn faster, get plenty of air time and has given them a consistent competitive edge.

3. Use native tools that already exist within vertical video formats

They offer a new level of creativity and really help to show that you’re tailoring your content specifically for that platform. On Instagram, brands can make use of GIFs and polls in Stories, for instance.

4. Play with the vertical shape

Don’t waste the space 9:16 gives you. Vertical offers some creative and surprising ways to make products the focus, such as split screen stacking or mirroring. Bottega Veneta consistently experiments with different framing and spacing techniques, making the most of the entire screen. Instagram is currently testing a format which converts non 9:16 content to fit the screen which will allow brands to use existing creative.

Just because you’re trying out a new format doesn’t mean you need to stray from what you’re doing on other channels. Stay focused on your audience and the style of content they expect to see from you. For example, if you’re known for irreverence, keep your vertical video content light and humour-led.

2018 is set to be the year that creativity truly flips on its head and brands realise the potential of vertical video. And who knows, perhaps as people watch more and more films on mobile devices, we could even see the world’s first vertical video cinema. 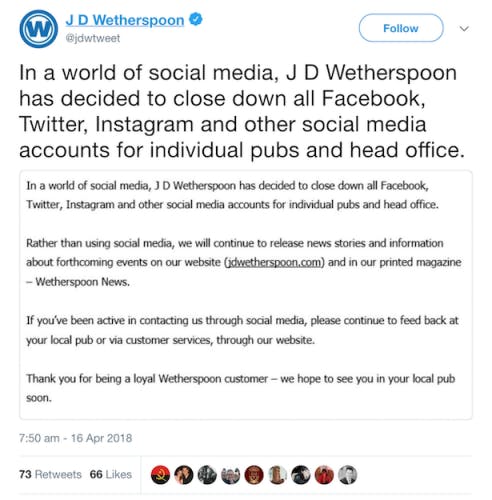 News broke on Monday that UK pub chain JD Wetherspoon will be shutting down their social media accounts due to their view on the current ‘climate’ of social media and the addictive nature of the platforms.

The company, that owns nearly 900 pubs across the UK, has made the decision to deactivate all of the Facebook, Twitter and Instagram accounts of each of their establishments, as well as their head office, to dispel and discourage trolling of MPs and ethnic minorities online. 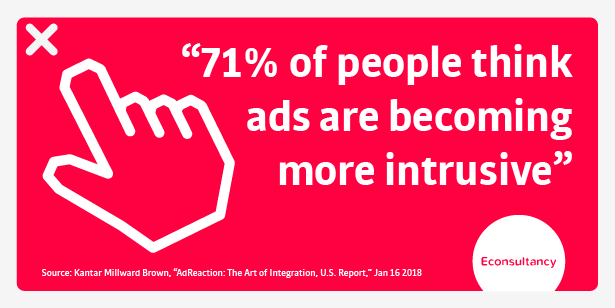 It’s high time we dig into some stats. This week’s roundup includes news about search, social media, celebrity campaigns, and everyone’s favourite (or not) topic: Facebook.

Be sure to check out the Internet Statistics Compendium too, it’s packed full of more info.