This may be about to change in Southeast Asia (SEA), though.

Econsultancy’s latest report, The State of Social Commerce in Southeast Asia in association with Magento and Hootsuite, features a SEA consumer survey which reveals that 85% of the region’s social media shoppers now find it ‘quick and easy’ to buy products via social media. Most (84%) respondents also said they will buy more on social media over the next few years.

Faced with a new opportunity, marketers are changing as well. Hundreds of regional ecommerce marketers were surveyed for the report and nearly 3 in 4 (72%) said there will be more staff dedicated to social media over the next 12 months.

Other highlights from the report are listed below.

Before discussing consumers and marketers, it is useful to consider the SEA ecommerce market and its potential.

There are approximately 350 million internet users in Southeast Asia, most of whom (90%) connect to the internet using their smartphone – which is now ideal for ecommerce.

Because of the growth in internet users and rising income, Think with Google reports that, by 2025, the ecommerce market in the region will exceed US$100 billion per annum. And, as the SEA region still has many non-digital consumers, we can expect the ecommerce market size to grow for many years to come.

How do SEA consumers use social media to shop?

Ecommerce is expected to rise in SEA, but how much will take place via social media? From the report’s survey results, it seems the answer is quite a lot.

Nearly all (96%) respondents indicated that they deliberately visit social media sites before making a purchase – and 6 in 10 (59%) say that more than one-quarter of all their online shopping is influenced by social media.

Just under half (44%) of social shoppers have purchased something online more than three times in the last three months and 3 in 10 (29%) spend more than US$100 each month on online purchases. 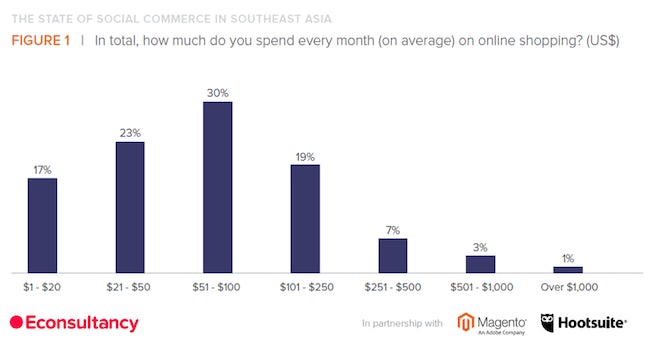 Finally, the survey shows that the social shopping doesn’t end with the purchase. Our survey found that nearly all (82%) of social shoppers share details of what they have bought on social media, too.

How brand marketers are reacting to the growth of social commerce

In the report’s survey, Econsultancy also asked SEA ecommerce marketers about the changes in the social commerce landscape and what, if anything, they are doing about it.

First off, survey respondents indicated that they have noticed that social commerce is on the rise. 70% said that ecommerce sales have increased, and that social media is a driver of these online sales (90%). 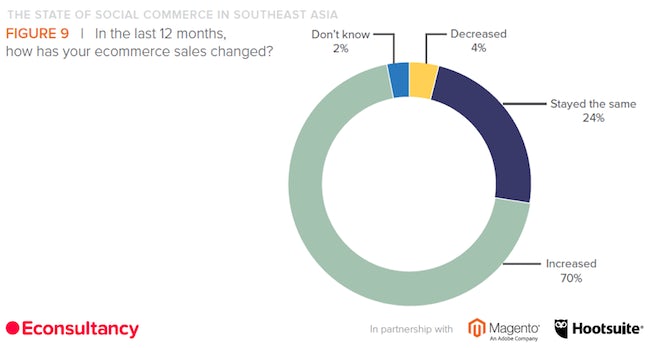 Because of the increase in social commerce, 92% of respondents said that providing a high-quality social media experience is now ‘critical for business success’.

But are they taking action?

Yes, it appears. According to survey results, 76% of ecommerce marketers in the region are increasing budgets for social commerce technology in the next 12 months, which is greater than the percentage of companies which are raising budgets for other technology (70%).

Ecommerce marketers, therefore, believe that social commerce has a bright future for their brand and nearly all (95%) felt that social media will become increasingly important for them over the next 5 years.

Around 9 in 10 (89%) of respondents felt that their company has a social selling strategy. But when asked to describe the strategy, nearly one in three (29%) said that the strategies impact on revenue was minimal. 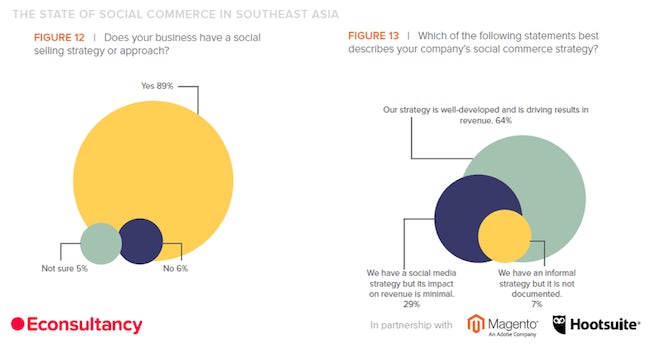 Respondents named numerous obstacles which are preventing them from developing their social commerce strategy further. These include ‘lack of measurement technology to set goals and benchmarks’ (14% of respondents), ‘lack of social commerce expertise’ (13%), and ‘lack of overall digital maturity’ (11%).

Finally, only two in five (40%) ecommerce marketers surveyed strongly agreed that their company can measure the ROI of all of their social media activities.  In this age of increased marketing budget scrutiny, this is perhaps the biggest barrier brand marketers will face when trying to take advantage of the rise in social commerce.

For more about this topic, please download the free Econsultancy report: The State of Social Commerce in Southeast Asia.

Paid search is typically seen as one of the most flexible digital channels, allowing you to quickly and efficiently set up campaigns that drive performance in a tight window. In my years working in paid search this has usually been the case. However, there are certain, highly regulated industries that flip these perceptions on their […] 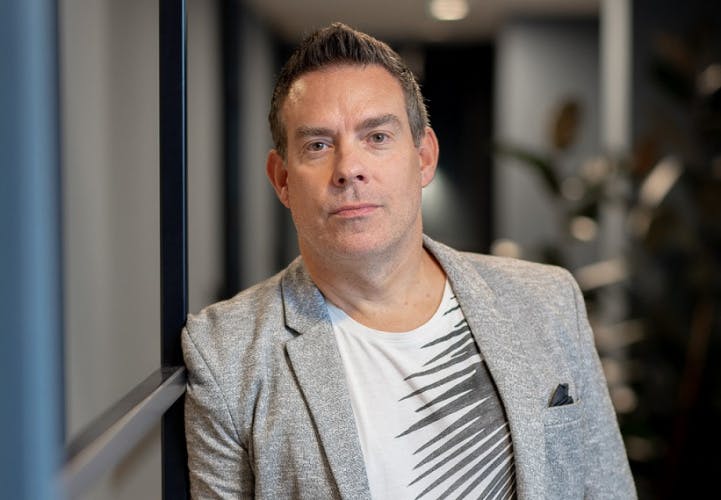 Paul Frampton is the President of the European divison of Control v Exposed, a performance marketing agency spun off from digital advertising company Goodway Group in February. 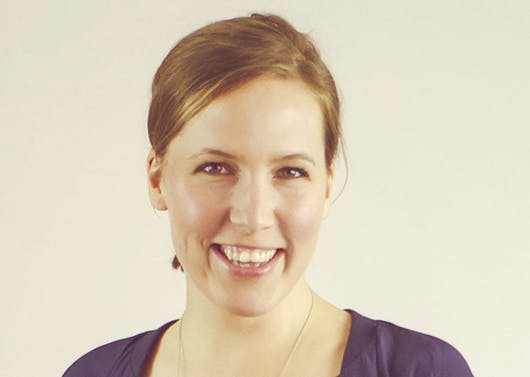 Jessica Dannemann of Episerver is an experienced marketing leader who describes her two most important skills as “bullshit detection and time management.” This is a ‘day in the life’ you don’t want to miss… Please describe your job: What do you do? Jessica Dannemann: As SVP and chief marketing officer at Episerver my job includes […]