Some of these models are illustrated below, and described by McKinsey: The Consumer Decision Journey:

However, they are wrong. They make the assumption that consumers only have direct relationships with the brand and do not cater for the influence and interaction with other people, even though they make reference to word of mouth.

They also over-simplify people’s individual thought processes, and, somewhat arrogantly, treat people as non-emotive robots or automatons making very logical decisions in isolation of others, with no mention of the drivers of impulsive behaviour.

Theoretically, they seem to make complete sense, but in reality it’s not the case.

When you throw in real people into the mix, like you and I, the dynamics change. We’re unique individuals right? Biologically we may not be, but emotionally, personality wise and through our experiences, we are.

We’re one of a kind. Our personality/make-up/identity, is steered and influenced by past experiences, how we want to be perceived and by the people we mix with. Our decisions are heavily swayed by this complex mix, not just how good a product is …..we don’t follow logical paths. How dare they even think this!

Example: Why am I made to queue outside a shop by my eldest daughter for at least 20 minutes, to be greeted by two ripped male Adonis models and enter a store where the lights are so dim you can’t really see what’s on sale?

I then spend at least another 30 minutes wandering around, observing that my daughter is not really looking at the clothes, but is much more interested in everyone else.

Due to my pestering and ‘encouragement’ of my daughter to finally make a decision (because I’m getting a little frustrated by this point) she picks up an item of clothing, which she barely spends 30 seconds looking at. It’s got the logo, the brand on it, colour’s ok…it’ll do. “We” buy it.

Who is the customer? I’m the person who pays, yet it’s my daughter who has become absorbed by this whole thing. She’s been influenced by others, and in turn has ‘influenced’ me…somehow.

Where does this play out in the models illustrated above? It doesn’t.

Theory would say, waiting is bad, and not showing the products in a decent enough environment is not a good idea either. It’s a poor experience for the consumer.

It’s a common bond of a micro community.

This dynamic is all about the influence of others, being part, or more accurately, aspiring to be part of a ‘cool’ group of people. It’s about identity, how you want to be seen and the recognition from others that comes with this.

More importantly, this isn’t a new dynamic, being part or being seen to be part of a “cool” group is most probably something people have always done.

If I can make a slight indulgence at this point, The Mods in the sixties had this down to a fine art and subsequent sub-cultures have followed a very similar dynamic.

Being part of such a group was everything to the people involved; achieving a level of status and recognition gave them even more kudos. Being a ‘ticket’ is one thing, but everyone wanted to be a “face”!

Putting people at the heart of the customer journey

So, doesn’t it make sense to put people at the heart of every customer journey framework? If you don’t know what gets them excited and how they behave, how can you create and implement a successful engagement strategy?

We need to create one which caters for the influence of others at every stage of their own unique journey, pre and post sale. It’s time to put the customer back into the customer journey.

It is essential to know exactly who the people are you wish to engage with; what they are doing and the reasons why they behave this way. Only then can you create a communications framework that resonates with the right people, at the right time and in the right places. 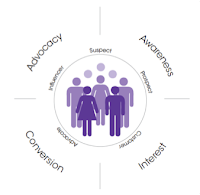 A framework for customer-centric engagement

This is a base framework with which businesses can map their consumer centric engagement around. It takes research. It takes time and effort. It’s real. It works. Foursquare has added an ‘Explore’ function to its
website, which effectively turns its billions of check-ins into a social search engine.

Data from 1.5bn check-ins is now available in the form of local recommendations when users search for a service in a particular
town via their computer.