Net Promoter’s scoring uses an 11 point scale from 0-10 in answer to the question: ‘how likely are you to recommend?’

SparkScore’s ratings will interpret comments within social media, on blogs and in customer reviews from Amazon among others.

Satmetrix says that it is working with Metavana to provide a “rigorous and reliable sentiment engine” on which to analyse sentiment.

The validity of sentiment analysis is always up for discussion, and social influence scores like Klout, PeerIndex and Kred are even more so.

eModeration marketing and communications manager Tia Fisher said that automated sentiment analysis is notoriously inaccurate, but it’ll take some time to see how Net Promoter’s methods differ from others. Plus how it keeps up with changes and trends in language.

The ‘would you recommend’ question is the most popular measure of customer satisfaction for a brand, but is too black and white to give any real meaning. It doesn’t take into account variables (‘the food was amazing but the service was average’). Not much use for brands who want to learn from social conversations and improve their service.”

While the credibility of the Net Promoter name will give it an advantage in terms of selling this brand-specific sentiment analysis to its existing clients, with the result be any better? Though for many it’s a strong starting benchmark, Net Promoter itself also has flaws.

Online PR consultant Michelle Goodall pointed out that the key here is how good the sentiment analysis actually is and we won’t know that until we can properly review the results.

But it might have been far more logical to mine recommendation data and provide scores based on actual numbers of indisputable brand recommendations that people make to close friends and peers, i.e. those people that really matter to us as individuals and whom we really wouldn’t want to give a wrong steer to.”

This could have been based on an algorithm that includes the length and strength of connection, frequency and recency of contact, use of familiar/friendly verbs, topics discussed, use of emoticons and such.

PeerIndex CEO Azeem Azhar agrees on this point, saying that though tracking social sentiment can give brands a numerical picture of how many people are making positive or negative comments on the social web, it ignores a far more important metric – influence.

One hugely influential commentator making a negative comment can outweigh 1000 less influential comments, so a simple sentiment metric can give a misleading picture.  If brands were to incorporate an influence metric into a calculation of this sort then you’d get a far more accurate picture of your true sentiment status.”

PeerIndex actually refers to this as ‘net promoters with friends’, where a net promoter who can refer you to hundreds of people who trust their opinions on a given topic is more valuable than a net promoter with none.

The other point here is that Net Promoter is playing catch-up. There are many other services that do this for brands now, and though Satmetrix’s announcement talks about no other services having “proven linkage to growth” – it isn’t clear exactly how SparkScore does.

Co-founder of Sociagility Niall Cook is surprised that this move wasn’t made sooner.

The Net Promoter methodology has a great legacy, so it makes sense to apply it to social media chatter. It will be interesting to see what value another sentiment analysis tool can add to brands that are realising they need a more multi-dimensional approach to measurement.”

What are your thoughts? Does Net Promoter have more of a chance of getting this right because of its history in this area – or this too little too late?

An estimated £1.02bn worth of online shopping transactions were abandoned in 2011 by UK consumers, according to Experian.

One in five of these abandoned transactions were not taken elsewhere as individuals cancelled their shopping attempt altogether, resulting in £214m worth of net lost revenue for UK retailers.

The study found that 44% of UK shoppers have abandoned at least one online shopping transaction in the last year having become frustrated with the length and complexity of certain older forms of identity verification.

The team from Bravo took to the stage yesterday morning at SXSW to talk about what they are doing to change the way we consume and interact with television. Just like every other business out there, television programs are having to move to a more integrated offering.

To demonstrate this, they presented the last season of Top Chef as a case study to show what they did to breach the gap and capture our attention on our second screens. 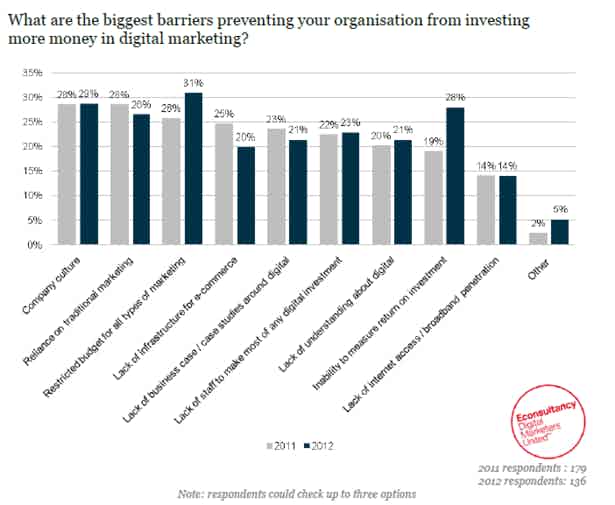