Apparently not wanting to be outdone (it reportedly paid some $300m less for Vitrue than Salesforce paid for Buddy Media), software giant Oracle today announced that it’s buying social media monitoring firm Collective Intellect. Terms of the deal were not disclosed.

According to Oracle’s press release, “Oracle’s leading sales, marketing, service, commerce, social data management and analytics, combined with Collective Intellect and the recently announced pending acquisition of Vitrue, is expected to create the most advanced and comprehensive social relationship platform.”

While there’s growing skepticism around social media’s ability to produce ROI, brands continue to invest heavily in their social media presences, which has made companies like Vitrue, Buddy Media and now Collective Intellect valuable commodities. They prove, once again, that when there’s a gold rush, one of the most reliable ways to make money is to sell tools to the gold miners.

The big question now is what these acquisitions mean for the acquired companies’ existing customers. According to Pando Daily’s Erin Griffith, Buddy Media, for instance, decided to sell to Salesforce because Salesforce had, well, the type of sales force it needed to scale its business further. That’s a fair reason to do a deal, but it doesn’t necessarily mean good things for existing customers.

Are the Salesforces and Oracles of the world simply checking off key categories on a social CRM list, or are they going to take their new assets and continue to innovate? The answer will determine just how much opportunity is left in this space. 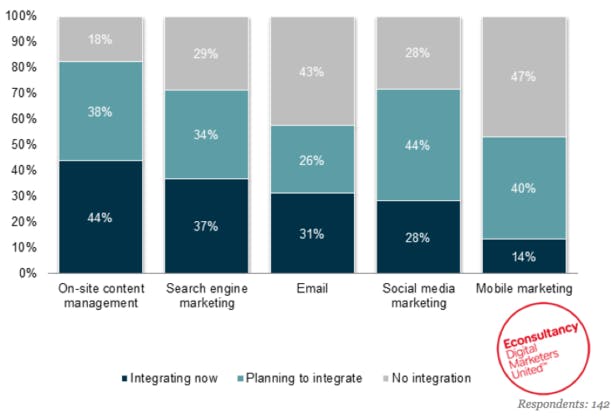 Integrating display advertising with other online channels has a positive impact on conversions, though less than half of marketers are currently doing this, according to Econsultancy’s Cross-Channel Marketing Report 2012

The report, carried out in association with Responsys, looks at the use of online and offline marketing channels, integration of display advertising and use of mobile for marketing.

The report is based on a survey of more than 650 companies and agencies, carried out in April and May 2012.

We’ve been investigating how and when the free version of Google Analytics uses data sampling to give you information on what’s happening on your website, and what that means for your data.

My colleague Adam put together his thoughts on the matter and I wanted to share these with you here.