I believe mobile focused companies like Amazon, Apple and Walmart, that are featured in Ben’s article, are deliberately choosing not to roll out a responsive website because it is not the right option for them.

Think about it… large American enterprises rarely make business decisions without guidance and data to back them up.

If responsive is the way to go, then why have they not done it already? What could they know that others don’t?

A site that will change the content of the page to suit the device it’s being viewed on. You can usually see this in action when you resize the window width of your desktop browser. RESS is what I treat as the next generation of responsive web using server side components to improve performance  e.g. using a device API and/or server side image resizing.

Smythson.com is a good example of this. A dedicated mobile site that serves content specifically for mobile users, which may or may not be similar to the desktop site.

The National Lottery mobile site uses this technique as its weapon of choice. 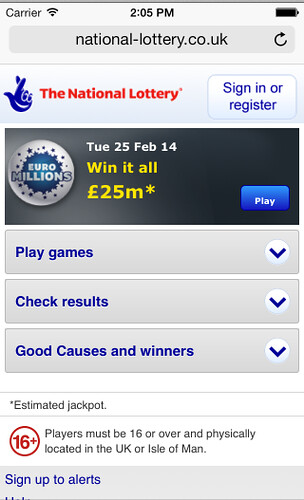 So why would some companies choose mobile specific over responsive? Here are some possible reasons…

A responsive solution means having to make some compromises on either a desktop or tablet site in order to get the technology to work.

That could be very costly if the desktop site is performing well. A 0.1% drop in desktop conversion rate could potentially cost £100,000s in lost revenue.

You know the saying ‘if it ain’t broke, don’t fix it… get a mobile specific site’.

Mobile conversion is growing but it’s still a long way behind desktop and tablet metrics. The build-test-learn cycle for mobile needs to move faster than the “tried and tested” desktop process that has been honed over the years.

A responsive site by default will tie mobile releases to desktop releases, which can hamper the ability to trade.

If you want to experiment in mobile, having a mobile specific site will be like having an ultra fast race car to road test the best ways to reach your mobile customers.

Large amounts of mobile traffic justifies having a dedicated team

Most brands talk about mobile in relative terms i.e. as a percentage of desktop. The argument is that if you are getting 30% of your traffic from mobile, it psychologically warrants less effort than the desktop, which is getting the lion’s share.

In my opinion dismissing the mobile audience like this is wrong, and I hope attitudes change quickly.

If you are getting a large number of mobile visitors in absolute terms i.e. 100,000’s of users, it makes sense to have a team focused on those users and to optimise for these people directly thereby extracting the maximum value from the traffic.

Let’s consider Facebook, which has over 1.1bn daily active users, of which 751m are on mobile. 189m users are mobile only and have never used a desktop.

Is it worthwhile having a team and dedicated mobile site catering specifically for those 10% of users who are mobile only? You bet it is. 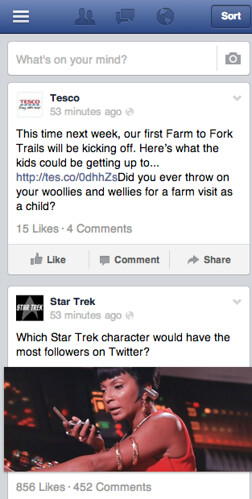 Ebay is a perfect example where performance is paramount. If a mobile user submitting a bid gets pipped to the post by a desktop user because of speed, this is a sure way to lose customers and money.

Having a simple stripped down mobile specific site allows Ebay to serve pages lightening fast without the extra weight that responsive gives.

This gives you a fighting chance of approaching the magic ‘one second page response time‘ which Google and us conversion geeks are shooting for.

I am sure Ebay’s pages per view and dwell time metrics on mobile will reside firmly in the dreams of many a marketer, thanks to its mobile specific site.

Sites where mobile users have a different journey to desktop users

Mobile users generally have a different agenda to desktop users and are looking for quick information. Macys.com has its store locator prominent on its mobile site but hidden in the footer on the desktop site. Some other great examples of this are yell.com and the big grocery companies: Walmart, Tesco and Asda who all have mobile specific sites.

Finding the mobile way forward for your own customers

As someone who works in mobile, creating high converting mobile experiences is something that gets me out of bed every morning.

Mobile is still in its infancy when it comes to building experiences that convert and engage so we’re still discovering, innovating and learning.

In my opinion, it will ultimately be a combination of mobile specific and responsive in a single website that will win out, but we are still a long way from that.

The message for now is that the only constant in mobile is change.

Most importantly, try to keep up with your customers.

You may have read in the press last week that obese football fans at this year’s World Cup in Brazil we have access to extra-large seats (and half price tickets!!). What this shows is that one size (or seat) does not fit all!

This train of thought should be adopted by any web designer when they are deciding on the best way to make a website compatible for mobile.

There are a number of options for mobile strategies: responsive design, adaptive design, a mobile version or a native app. One approach may suit a company perfectly and be completely inappropriate for another. Perhaps a combination of strategies is the way to go.

By using comparisons with football players past and present, this blog post delves deeper into the pros and cons of each strategy…

Is achieving integration of print and digital publishing the pursuit of the Holy Grail? Well, it certainly sounds nice listening to a publisher talk about burgeoning digital revenues in multiple channels, alongside beautiful print products.

Verdens Gang is a Norwegian newspaper with a daily circulation of more than 200,000, in a population of 5m. Across print and digital, 1.8m people use VG daily.

At Digital Media Strategies 2014, editor-in-chief and CEO of VG Torry Pedersen gave the lowdown on how they integrated print and digital effectively, along with how they monetised smartphone and tablet content.

Culture is the key, as is so often the case in disrupted industries where big brands have to adapt and are competing with pure-plays that have started on the right foot.

Torry used the analogy of Haile Gebreselassie vs. Usain Bolt to describe print and digital. They both run but they run in very different ways and they shouldn’t have the same training regimen. The same can be said of magazine-style high quality print products compared with the fast-moving multimedia world of online news. The two teams can’t necessarily work together.

That’s why from 2000 until 2011, everything at VG was separate for print and online, from ads to editorial. In 2011 the two were joined back together once again.

The same thing happened with mobile and desktop, the two had separate ad sales and technical teams from 2010 until 2014 (though the same content team). Now ad sales and techies across desktop and mobile are integrated.

So what are the challenges that VG has overcome and how is it moving forward?