Shelter is one charity that has experimented with the technology in the past few years. It first developed ‘Sheldon’ during a hackathon – a bot that would theoretically be able to answer people’s queries about private tenants’ rights in Scotland. On the back of this, the charity has gone on to develop and implement ‘Ask Ailsa’, which is a fully working chatbot created in the same vein.

In order to gain a better understanding of Ailsa, as well as the charity’s use of artificial intelligence in general, I spoke with Keith Bartholomew, senior digital officer at Shelter Scotland.

(N.B. If you’re interested in AI and marketing, check out Marketing Week’s Supercharged conference on May 1st.)

What’s the purpose of the chatbot?

According to Bartholomew, the purpose of Ailsa is very much rooted in problem-solving rather than fundraising or general awareness.

Ailsa was developed to coincide with major changes being introduced to private renting in Scotland, involving a new kind of private tenancy, with new rules around the length of a tenancy, how much notice a tenant had to give, and how a landlord could end a tenancy.

While these changes were created to give more rights and better protection to tenants, as well as to easily resolve disputes if things go wrong, Shelter predicted that the changes would inevitably result in confusion for tenants and landlords alike.

As a result, Bartholomew says that “the chatbot was developed to answer any questions people may have, and ensure they are aware of the new rules.” 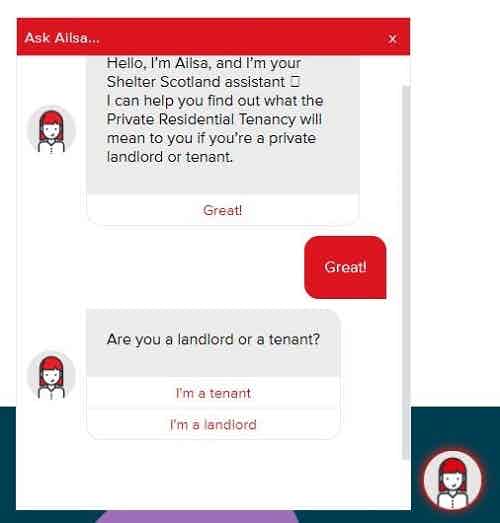 The chatbot currently has very little ‘chat’ – does it matter?

One of the biggest obstacles brands face when creating chatbots is limitations in technology. While NLP (natural language processing) theoretically offers users a richer and more interactive experience – one that mimics human interaction – this often takes a long time to come to fruition (as the bot learns natural speech patterns over time).

These kinds of bots can also go awry, either failing to answer basic queries or worse – speaking in offensive language. Microsoft’s Taybot is the most famous example of this.

For Shelter Scotland, the chatbot was initially developed to work from a set decision tree of questions.

The speed and ease with which the bot could be created was undoubtedly a big motivator, as well as the straightforward nature of user queries in the first place. However, the charity has since decided it is keen to develop the bot further.

Bartholomew tells me the bot is “currently in development of stage two, which will introduce natural language programming and allow for a greater number of queries.”

With recent talk about further new rules for private renting in Scotland, Shelter is clearly intent on pre-empting the next inevitable onslaught of questions.

A lot of brand chatbots have been created through the Facebook Messenger platform. This is largely to do with the technology’s accessibility, but also so that brands can expand their presence on the channel and connect with its mammoth audience.

Shelter Scotland decided against this, instead creating the chatbot to be hosted on its standalone website, which would be promoted through very targeted marketing.

Bartholomew explains that this decision is also due to the bot’s very niche purpose: “Since it could only answer questions relating to the new private renting rules, we didn’t want to open it up Facebook Messenger or to respond to general advice queries.”

Instead, the bot is integrated into the charity’s ‘New Rules’ microsite. 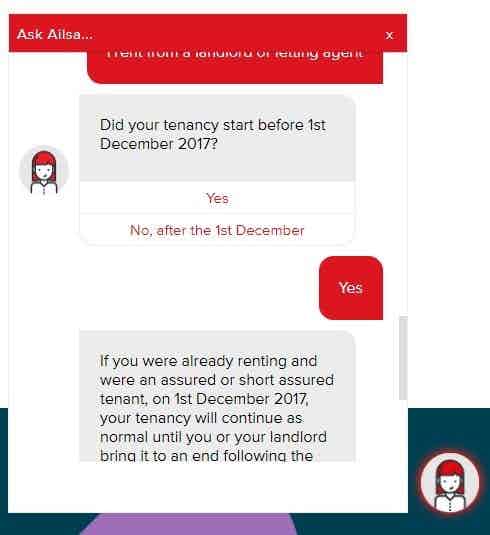 How many people have used Ailsa?

According to Bartholomew, the chatbot has been used 4,380 times since it first launched last October.

That’s a fairly impressive amount considering the time-frame – and definitely worthwhile considering that those people would have otherwise contacted the charity’s helpline service.

“The chatbot allows people to self-serve and find out the information online, rather than phone our helpline. It has helped a significant number of people get to grips with the legislation changes, without us getting a large volume of calls to our helpline,” says Bartholomew.

Quite rightly, he reiterates how “advisers are available to respond to more urgent queries” as a result. And from the user’s perspective, it undoubtedly means a better experience – with less friction and a satisfying outcome.

Ultimately, this has been the bot’s biggest benefit and the reason why Shelter Scotland would consider AI again in future. The charity is running a hackathon in Edinburgh at the end of March in order to develop further solutions related to the private renting situation in Scotland.

With users clearly finding value in Ailsa, it’s an example that could be well-worth repeating (and one that other brands keen to develop chatbots could learn from).

Artificial intelligence (AI) has permeated into many parts of everyday life, if you look hard enough you can see it in unassuming places; from the facial recognition of Google photos to the spam filter in your favourite email app. But perhaps it is in areas of commerce and industry where we can see its value the most.

Manufacturing operations are being optimised, data is being collated and analysed at an ever increasing rate, and deep learning enables ‘intelligent’ machines to make independent decisions without human guidance. 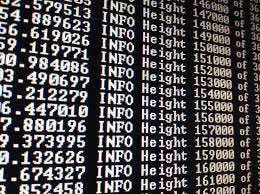 While Bitcoin and other cryptocurrencies face dramatic price swings and are still the focus of controversy, interest continues to grow in the blockchain technology behind cryptocurrencies.