But for all the Alexa Skills (Amazon’s name for apps) that arguably need finessing, there are some brands that seem to have made a good start.

Capital One is one such brand, which offers the first and only banking Skill currently available.

The bank has moved quickly and has garnered some good reviews.

Banking mobile apps are amongst the most sophisticated and widely adopted, so is it a natural leap on to the voice UX of a cognitive assistant?

There are 130 Alexa Skills in the business and finance category on Amazon. However, most of these are news related.

One or two Skills provide information for users that play the stock market. Fidelity is the chief example, though is seemingly not the most elegantly designed Skill (it isn’t real-time and is accused of being too verbose, and lacking a full range of stocks).

Listen to the Skill in action in the video below and see if you think the information is easy to take on board or beats the UX of a screen. One suspects the user will quickly jump back to a mobile app.

Virginia Credit Union has an Alexa Skill, but the extent of the functionality is, to me, somewhat comical.

For example, the Skill boasts the ability to ask “What’s the Member Services phone number?” or “When is Member Services open?” – a science fiction gadget to direct you back to a telephone. Multichannel, maybe, but frictionless, definitely not.

Capital One, though, does much more. Example commands include:

For your credit card:

For your bank accounts:

For your auto loan:

This is genuinely useful functionality and it seems to be pleasing customers. The only bad reviews I found on Amazon come from two or three users who couldn’t get their account linked – a common theme across virtually every Alexa Skill that requires it.

Capital One Alexa Skill in action

For the moment, one may argue that other banks have not followed Capital One simply because it is too early. Capital One is the first to recognise a market demand, whether or not it persists.

However, could privacy be an issue deterring financial services from following suit?

Here’s what one reviewer says of Capital One’s Alexa Skill:

My concern is that the pin code necessary to access account information, pay bills, etc is stored as plain text in Alexa’s voice history list, and can be read by anyone who looks.

99% of people are not going to know how to go on Amazon through their PC and clear that history, or scroll through hundreds of entries and delete it from the Alexa app. This to me pretty much negates the security aspect of requiring a pin, and so I removed the skill.

One can see the reviewer’s point. There are more general concerns, too. Even if you believe that passive listening doesn’t represent a problem (it is only Alexa’s wake phrase that begins the recording of interactions), there are laws and regulations that may apply to voice UX.

A paper by the Future of Privacy Forum (FPF) points out a few of these:

Now, of course, at the moment, Alexa only recognises speech (anyone’s voice), it doesn’t recognise one specific voice and use it for biometric purposes. However, voice recognition is improving and the end goal may be to recognise a voice signature.

Either way, the FPF paper points out some ambiguity in the law when distinguishing between the recording itself and the use of that record for biometric purposes.

…it becomes increasingly possible that courts will be unable to reconcile the third-party doctrine with the historical notion of the home as a constitutional sanctuary. Until judicial solutions are reached, the distinction between local and external processing…may be of particular importance.

This distinction may not affect banking directly, but it does hint at a possible tension between privacy and voice UX.

Usability hurdles seem to be smaller

For all the legal ambiguity, voice UX offers some great usability benefits for banking, provided an Alexa Skill (or similar) is properly implemented.

Speech input is three times faster than text for English or Mandarin, and there are obvious benefits of voice for some disabled users.

There are issues with voice UX that are yet to be solved, of course, and one of them is a diminished accuracy of speech recognition for children, seniors and people with accents.

But voice is definitely coming

Whether we’re talking Amazon Alexa or simple voice searches via Google, voice input is on the rise.

There has been a 7x increase in voice search queries since 2010. Google and Microsoft say that nearly one in four mobile searches are now voice-based – that’s pretty significant. It’s not hard to look to a future where instead of rooting in a box file under the stairs or even checking a mobile app, banking customers can simply ask their cognitive assistant for information.

However, though Amazon sold more than 5m Echo units in 2016, one suspects it will be some time before all the privacy and UX issues come out in the wash.

Capital One has to be applauded for getting a working Skill out so quickly – a product of the company’s design expertise. Other banks will be watching carefully over the next year, keen to see whether Alexa integration creates some sort of market demand. 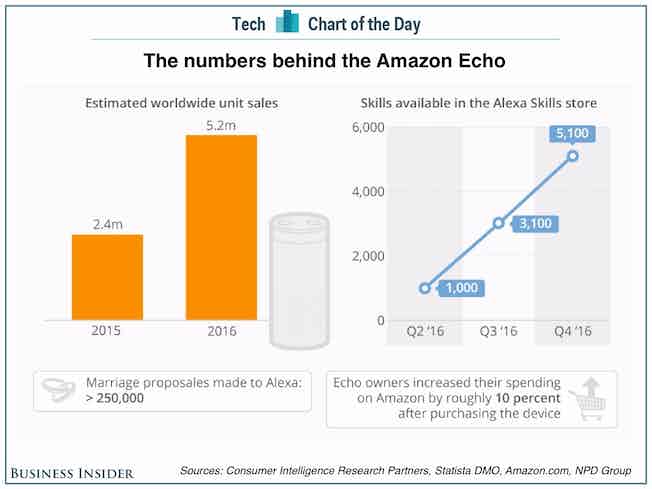 Amazon Echo and the intelligent assistant, Alexa, are the most interesting development in digital communications today.

Unlike previously-hyped hardware such as Google Glass, Echo made a surprisingly quick entry to the market and has seen strong sales.

The most important tenet of service design is working with user stories in mind.

This obsession with user centricity is creeping across business – is there any company exec that hasn’t expounded to the press that “the customer is at the heart of everything we do”?

Thankfully, there’s a renewed focus on the customer among marketers, too.