Seven League began working with Leicester as the club’s lead digital agency in December 2015. The agency conducted an audit and assessment of website platforms, CRM, analytics, content, and social media.

Leicester, like many football clubs in the English leagues, were beset with legacy technology problems and were intent on migrating away from the generic Football League Interactive (FLi) platform. Ayers points out that though the old FLi platform was obviously no longer fit for purpose, “it’s a hard thing to do to make a centralised platform that works well for 70 clubs” of all different sizes and needs.

Indeed, we’ve looked at other clubs before on the Econsultancy blog (such as Swansea, Stoke and Middlesbrough) who have also chosen to move away from the FLi solution, though it should be noted that the FLi launched a new platform this summer with many clubs choosing to stay in the modernised scheme.

Ayers admits that it was particularly “difficult to change [so many] parts and sync development timelines” but that contracts were coming to an end at the same time and it was decided that getting these new systems in place would then allow the club to go on and hone its commercial digital strategy.

The development took six months, from February to July 2017. You can check out a list of the vendors involved in the project at the bottom of this article. Leicester is now in exalted company as Ayers says that “Across Europe, as far as I’m aware, it’s just Bayern Munich and Paris St. Germain that have the same level of single sign-on that Leicester have got now.”

Yep, Leicester City is the only Premier League club with website, tickets and ecommerce rolled into one account for the fan. That’s great, but it’s also quite revealing of the pace of digital transformation at most Premier League clubs.

Single sign-on is a big plus for many reasons (UX, data, conversion), though Ayers admits that “you’re never going to get a fan saying ‘wow, my single sign-on experience is so amazing’.” It is, however, a big hygiene factor and “annoying to people if you don’t have it”, says Ayers.

In order to create the single sign-on, ticketing history was maintained and migrated to the new accounts – fans simply had to enter their season ticket or membership number to link an old account to their new one.

Purchase history was not carried across from the online shop, but Ayers laid out the rationale for that decision, saying “It was felt that because product ranges change very often and the data was somewhat messy, the likelihood of being able to do something useful with that data wasn’t that high compared to what we have with the new platform” and was very much secondary to ticket history.

(Update, Oct 2017: Ayers has since let me know that they “did migrate all of the historic retail data into the new CRM system, but we didn’t make it available in the relevant API for display in the front-end on fan’s account history pages” – Ed.)

2. Analytics is set up properly

In Ayers’ words, “web analytics was not good across previous platforms.”

That’s a bit of understatement, given that Ayers tells me “ticketing and retail were on the same platform, but ecommerce tracking wasn’t set up, so I could see how much revenue came in every day, but I couldn’t see [without looking at the sales reporting] whether that was tickets or retail items. Being able to unpick that figure was pretty hard, and you couldn’t get a lot of good intelligence from it.”

However, Ayers continues, “with the new platforms, we have Google Analytics profiles for each individual site (main, shop, ticketing). And there’s also a rolled-up profile where all the traffic from all those sites is merged into one profile where we de-dupe users.”

Ayers explains what he means by de-duping in analytics: “A common problem we see on lots of football club ticketing or ecommerce sites is that you look at referrer details to see what’s driving revenue but often what you’ll see is it’s our own main website that’s driving revenue – that’s not useful information. I want to know where people came from before they hit our website [and then clicked on tickets or shop].”

Again emphasising how dated the old FLI platform had become, Ayers says that “the mobile and desktop sites were literally different products. One analytics profile for mobile and one for desktop – trying to glue that data together was speculative.”

Thankfully, the Foxes are in a much better position now to understand their online success.

3. A clear incentive for paid membership

“One of the nice things that single sign-one has enabled,” says Ayers, “is to tie the membership scheme in well and have a clear digital pathway from free digital members to paid members.”

But where Leicester has been smarter is linking the two via the online shop. Paid members get 5% of their shop spend back as rewards, season tickets earn 10%. Free members earn these rewards, too, but crucially they are only redeemable if you are a fully paid up member. “So there may become a point,” Ayers points out, “if you’ve spent money in the shop over the season, where it becomes uneconomic not to pay for membership.”

What this means is that pathway for users may look something like this:

Unlocking this pathway is a big bonus of single sign-on, and no doubt Leicester will optimise these journeys and club marketing over time. All the excellent content you see on the Leicester City website is produced by internal content teams, which were beefed up in the wake of Leicester’s 2015/2016 title win.

Ayers makes some interesting points about how a legacy platform with poor UX previously impacted the content team:

“Previously, content teams produced a lot of video content that was behind the FLI subscription product, and because it was behind the paywall, the reach of the content was lower. Inevitably, [content teams] focused on the things where they got – social media, for example, which saw a huge uplift in the title-winning year. Putting content into subscription channels didn’t get as much reaction and job satisfaction can be affected.”

Though a lot of this content is still behind a free subscription on the new website, the platform now looks great, the team can present their work in a much more pleasing way using different long form articles or video formats, with much better functionality that you’d normally associate with a web publisher. Suddenly, Ayers says, “[content teams] take a lot more pride in the website.”

This means, Ayers continues, that “the quantity and quality of content has increased, with people trying new things.” Regular live broadcasts are a notable new addition, with content that feels very much like that of a major broadcaster involving past players acting as pundits.

There’s a knock-on effect that this has around the club. Ayers cites the example of access to first team players: “Players have lots of commitments. It can be the case that players are less interested in club internal channels if they don’t look great. Whereas now they are more likely to appreciate them. It’s a win-win, the website benefits and the players benefit.” Some early stats for you now.

Obviously, Ayers says, “this was expected, given the comparison of functionality between the old and new ecommerce sites.”

“Historically,” Ayers adds, “football ecommerce sites have been an afterthought. For example, the old Leicester shop used to offer only one delivery method – next day courier at £6 – now it offers Royal Mail, too.” This is what customers expect and will of course have a bearing on overall conversion.

A site with good UX on mobile is vital for convincing customers to buy when in the moment on the smaller device.

6. Leicester will be able to capitalise on Blue Friday and Christmas

Success on the pitch has had a big impact online for Leicester City. Ayers tell me the club shot up close to the top six Premier League clubs for social media engagement and followers.

And though he admits it “would have been nice to have the new website in place” during the title-winning season and the following Champions League campaign, Ayers says “they still did very well on Blue Friday,” the club’s version of Black Friday.

The hope is that the new website will allow even more sales on these important holidays in 2017, as the functionality and resilience of the platform will help the club meet demand efficiently. 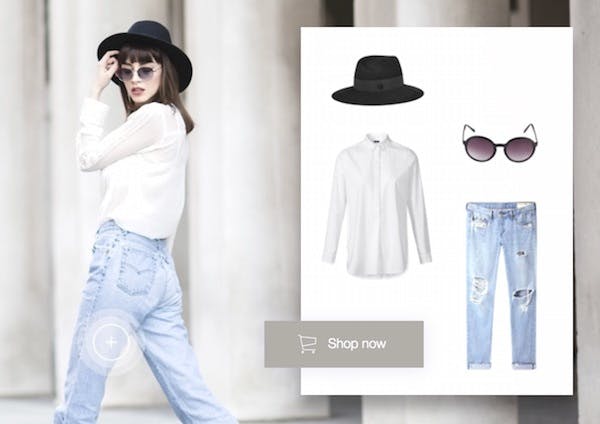 There are clear use cases for machine learning-powered image recognition in ecommerce – namely visual search, product tagging and content curation.

Fashwell is a company that provides such technology, so I asked a few questions of CEO and co-founder Matthias Dantone.