Football (or soccer for those reading in the US) is by far the most popular and widely watched sport in the world and the sport’s top-tier talent are now expected to present themselves as brands and brand ambassadors outside of the white lines on the pitch.

And with great expectation, comes great responsibility. Social media has enabled some of our favourite footballers to interact and communicate with their fans in a way unbeknownst to the superstars of even the recent past… can you imagine if David Beckham had an instagram account, in the peak of his Manchester United and England international career?

With this in mind, I’m going to take a look at the players lighting up the world of social media and using the various platforms at their disposal to entertain, inform and interact with their followers.

Recent Premier League champion, Raheem Sterling, is a footballer that has branched out considerably to engage his fans and followers. Different to a lot of other footballers, who look to platforms like Instagram, Twitter and Facebook to interact with their followers, Raheem has recently been very active on YouTube, creating his own channel.

Here Sterling shares videos ranging from football challenges featuring his friends, to cruising in his car with other prominent YouTube influencers like KSI.

Amassing a good amount of views and comments, these videos are a great way for Sterling’s fans to familiarise themsleves with his personality. With a mostly humorous tone to his uploads, it’s clear that this channel is an opportunity for Sterling to give fans a reason to love him more and give those on the fence (and active on social) a reason to buy into his brand on and off the pitch.

YouTube videos are easy to share cross-platform and most of his uploads end up on Instagram in a shorter form, directing people to his YouTube channel. Usually the friction of switching platforms to view content can be off-putting, but due to the funny and ‘must-see’ nature of the content it’s a step most fans are willing to take I’m sure.

Another Manchester City player that’s very prominent on social media is their acquisition from last summer, Benjamin Mendy. The former AS Monaco full-back came with a big pricetag and was a relative unknown. Oh did that change fast thanks to his Twitter account…

From his first few tweets as a blue, Mendy was funny and endearing, using Twitter to show his jovial personality through humorously captioned photos, great one line responses and hilarious hashtags (see the thread below). A nod to a cultural icon like Nandos definitely doesn’t hurt when trying to interact with fans of football in this country either…

Mendy is a confident player that’s not overly concerned with how people perceive him, which can be a valuable quality to have in football – names like Zlatan Ibrahimovic and Eric Cantona spring to mind. Using Twitter as your tool to share your personality with your followers is a no brainer and could be Mendy’s way to becoming a cult hero at the Manchester club.

The ability to interact with players in real-time is something that fans of the beautiful game have longed for for years and players like Mendy are doing a great job of meeting their desires.

Also, it’s worth noting, Mendy is a great example of how to use native video on social. Advertisers take note – I’m a Chelsea fan and actually liked and retweeted the post.

Now to something even more lighthearted. One player that was famous on social media before he even had an account is Liverpool utility man James Milner. The ‘Boring James Milner’ Twitter account has been going strong since July 2013 and is one of the funniest parody accounts on Twitter.

Just texting Philippe Coutinho but I think he may have ran out of signal. pic.twitter.com/8mlzECWbDb

Playing to the stereotype of James Milner as a footballer as professional and straight-laced as they come, the account posts hypothetical scenarios that Milner finds himself in, with a running commentary. With a lot of Likes, retweets and replies Boring James Milner gave a voice to the voiceless… that was until March 2018.

The real James Milner (blue tick in tow) joined the social network back in March and has proven to be just as dry as the parody account suggests. Keeping his posts fairly modest and limiting them to a couple a day, Milner has given fans the opportunity to familiarise themselves with him and the work of his charitable foundation.

Fully aware of himself and how people have come to know him (possible through the parody account) he’s also not scared to make fun of himself. @BoringMilner would be proud…

One player with a huge international fanbase – in part due to the fact he’s played all over Europe and in part due to his viral soundbites, interview snippets and hilarious quotes – Zlatan Ibrahimovic is a larger than life personality both on and off the pitch, but is this reflected in his social media activity?

Zlatan uses social media as a sneak-peak into his life, featuring celebrity friends as well as some promotional posts for endorsement deals he has with the likes of Samsung and Visa. 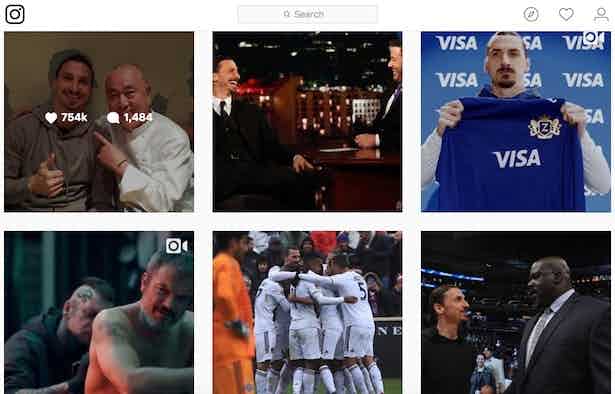 With his outspoken persona to uphold, Ibra’s social media activity definitely matches its owner. His light-hearted view of life (with confidence that can seem tongue-in-cheek at times) is designed to invoke a reaction from the viewer.

Now that he’s moved over from the UK to Los Angeles to play for the LA Galaxy, it’s as important as ever for the former Manchester United and AC Milan star to maintain a strong bond and connection with his fans, especially from a commercial standpoint. The MLS market isn’t as saturated as the Premier League is and it could be time for the 36 year old to capitalise on the brand that he’s been establishing throughout his career.

Using visual platforms like Instagram and Facebook is a great way to communicate with an audience, and get them to buy into your brand or your advertisers. With 60 million followers, across both platforms, Zlatan has a lot of eyeballs on his content. That tied with the fact that it’s a World Cup year and ad spend on Facebook is rising, I’d expect to see more and more from the likes of Samsung and Zlatan on social media.

It probably wouldn’t feel right without Messi and Ronaldo in this roundup in some capacity. Whoever you think is better (Messi is the GOAT, in my opinion), we are all fortunate to have lived in a time where both of these once-in-a-generation players were playing in their prime. Leo and Ronny are both easily the most popular and decorated active footballers in the world and their various endorsements amount to $27 million and $35 million respectively.

In the spirit of healthy competition, let’s take at how each compare on social. Here’s how the two measure up in terms of ‘key’ metrics on Instagram:

Ronaldo’s Instagram is channel primarily used for self promotion of his personal brand (abs included) and his various endorsements, from Nike to Clear Shampoo (and more).

Making a staggering £308,000 per post on instagram, brands and companies clearly know that working with Cristiano, and using the power of his social media presence to engage with people that follow the Real Madrid legend could be a very profitable marketing move.

What’s more, at the beginning of the year, the Portugal captain ranked as the third most followed account on the platform – behind only Instagram’s account and Selena Gomez. That’s some clout! He does have some pictures of his family, girlfiend and kids but they are definitley not the focal point of his profile. 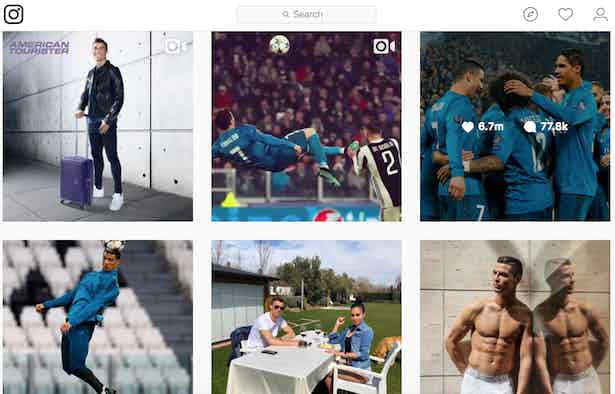 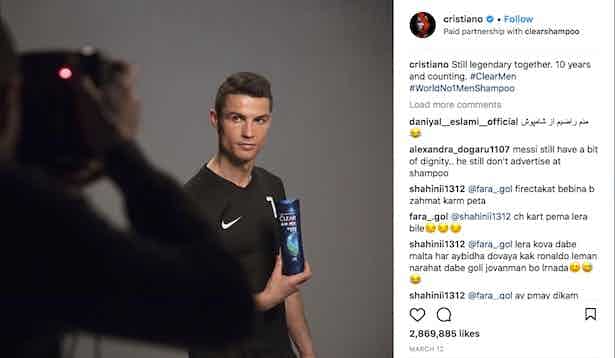 To say the Barcelona man uses his account much more sparingly would be a bit of an understatement. With a fraction of the lifetime posts his rival has, Messi’s Instagram account is very simple, minimalist and modest – consistent with how we perceive the little Argentine.

Messi rarely posts promotional content and is much more generous with posts of his family and dog than, say, Adidas products. And therein lays the beauty of his Instagram. Messi is synonymous with being a humble and reserved character, on and off the field, whose only concern is winning with his team, which is why most of his posts feature one or more other person. On a platform that can be lambasted for promoting vanity, Messi cleverly reflects the public’s perception of him on the social media site with the same consummate ease he plays football. 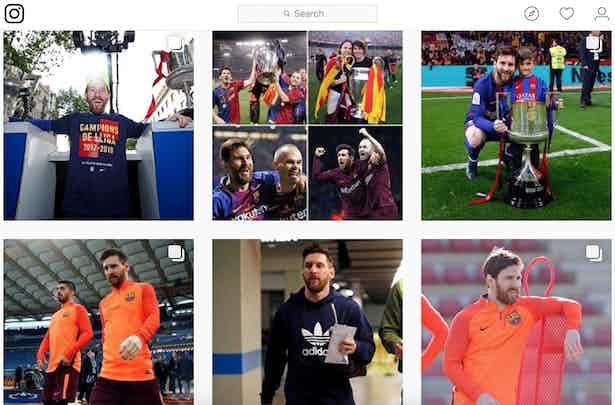 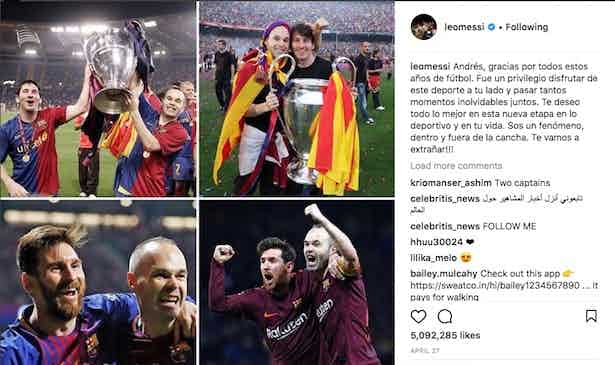 More on sport and social media: 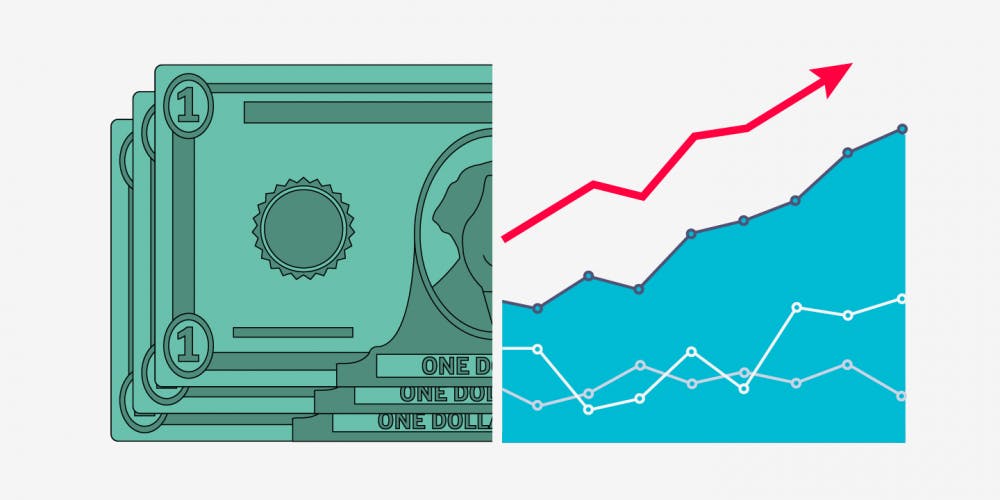 To capitalize on this, these platforms have been rolling out so-called “shoppable experiences.” Instagram’s shoppable posts format, for instance, allows retailers to tag products in their Instagram posts and link them to their websites.