A quick look at revenue growth over three years shows that companies loved by their clients grew more than twice as fast as Super Bowl advertisers.

The NFL has built one of the smartest businesses in broadcasting. In an otherwise fractured media landscape, its weekly games routinely top viewership ratings. CBS, NBC and Fox all carry its games – showing meaningful brands are more influential than the undifferentiated reach of networks.

Forbes points out that this growth record beats the S&P 500 (10.3% to 6.3%), and that it has been more consistent than the rise of stock prices over the same period.

This isn’t a complaint about advertising, it’s a challenge to either do it well or to more beyond it by building direct to consumer relationships. These can fit together, but if one must be picked, earning the preference of customers beats attention seeking.

Successful advertising reaches and moves people. This Sunday the NFL will certainly deliver the reach. But my industry, in which I work and teach, has what is at best a spotty record of moving the ball down the field for real impact. I love great marketing, and either we need to get a lot smarter about advertising, or get closer to customers.

The problem isn’t the medium, it’s our message

The thrust of many, perhaps most, Super Bowl ads boils down to one simple but destructive message, “Look at ME!”.

The Super Bowl has become an unseemly night when marketers celebrate the spotlight and the spend which is Super Bowl advertising. And the media has fallen in to line, covering the ad game as if this makes perfect sense.

And no, the volume of social media around the game and its advertising doesn’t change this.

David Rogers from Columbia Business School nailed it in his session at Econsultancy’s Jump Conference in New York, where he pointed out the word “engagement” has been used to the point of folly. If viewers like, share, or view a creative but irrelevant ad on YouTube, its is measurable but its value to the business isn’t.

My creative director friend, Andrew Schwint, reminds me as often as necessary that “creative has to pay-off on a real strategy.” In the Age of the Customer, “Look at Me” isn’t a winning move. Awareness without meaning equals irrelevance.

No, it’s just a challenge that requires marketers to raise their game. Good ads are tangible, approachable, personal, and memorable. They represent their sponsor’s regard for customers, and how they intend improve the lives of their buyers. And they lead to sales.

Just ask Jeff Rohrs, the VP of Marketing at Exact Target. Their long-time client, Papa John’s, stood up a Super Bowl campaign that took its opening coin toss and turned it in to new business.

They invited customers to vote “heads or tails” on the Papa John’s website to predict the Super Bowl coin toss. When the coin fell in their favor, all Papa Rewards members were then automatically sent a unique email, featuring a one-time promo code for a free pizza. 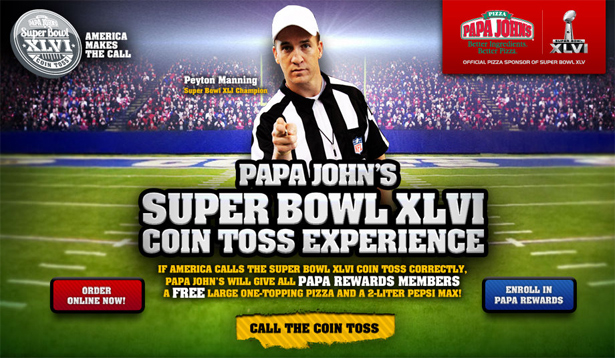 This energized Papa John’s loyalty program, generated orders, and created the kind of engagement that makes cash registers ring. This is more than an ad, it’s a strategy.

Pulling off an ad amidst the drama and snacking of the Super Bowl is an expensive and difficult route. But there is another route, which is going straight to customers. Imagine making every interaction with us “approachable, personal and memorable”? How about creating products that show customer our regard for them through design?

Unlike ads that call for customers to change, this kind of thinking calls for companies to change.

It’s possible to compare these two paths. I’m the first to admit that comparing the three year growth in revenue of the the top ten advertisers in the US with the ten top ranked customer brands isn’t perfectly “apples-to-apples.

My back of the napkin calculations reveal some differences between these groups. For example, the biggest advertisers tend to be manufacturers, and the customer experience stars are more often distributors.

Some of Forrester’s experience leaders are sub-brands, so its hard to break out their performance. But that doesn’t mean there’s not a big difference.

Forrester Research’s top ten customer experience leaders have a three year growth pattern better than twice that of the top ten U.S. advertisers. Though Super Bowl advertisers garner a lot of attention for their ads, this data suggests that firms that make customers happy do better that really big advertisers.

Among this year’s Super Bowl advertisers, Samsung and Best Buy are the only companies covered by Forrester’s customer experience index. This means we can compare these advertisers to their competitors who lead their categories in customer satisfaction.

In both cases the growth of the advertisers is far lower than their competitors who led in customer satisfaction.

Advertising has value, but the power of the known name isn’t what it once was. In the Age of the Customer, customers know more names and have far more ready access to information.

Gaining the preference of customers who are more loyal, eager to do business and to promote it is a persistent advantage.

Customers are on to this. They may laugh or at least notice ads, but then real game comes back on. And for us as marketers, the real game is earning customer preference, and that playbook is based more on what we do than what we say or buy.

Is social media, and the data it produces, overvalued? As companies continue to struggle the ROI from their social initiatives, some are starting to suggest that social’s impact might have been overestimated.

The question of permission and customers rights regarding marketing material is one that has privacy evangelists and marketers head to head. Many forms of direct marketing can be seen by the recipients as intrusive and disturbing and this has led to a bit of a backlash.

In some cases, this has spawned legislation (as in TPS in the UK) and in others, poor publicity via the national media and threats of further control from politicians.

But, out of all of the different direct marketing channels, email seems to be the quietest when it comes to public outrage.