The example of record-breaking surfer Garrett McNamara shows how preparing with the right toolset puts you in position to take advantage of opportunities.

Watching a recent HBO documentary on the world’s greatest surf challenge, I realised that the way successful marketers work is similar to record-breaking surfer Garrett McNamara. As a marketer you’re constantly striving to deliver unrivalled digital experiences for your customers. This means relying on an expert and diverse supporting team.

In 2011 McNamara entered the world record books for successfully surfing a wave measuring 78ft. This daring feat took place in Nazaré, Portugal, a tiny fishing village with a deep offshore canyon creating the biggest, most unpredictable waves on the planet. Waves that have always been deemed ‘unsurfable’.

A seasoned pro, before attempting this feat McNamara put solid foundations in place. He commissioned a support team of specialists he could trust with his life. Plus, global surf and local tide experts, a green light from the Portuguese authorities and a decentralised global team with specialist skills. The conditions he faced were uncharted, he needed to know how to handle a new scale of wave in practice.

Marketers are living in a new wave of accelerated technological advancement alongside heightened customer expectation. Those with the greatest ambitions can learn from McNamara.

His modular approach is closely aligned with the principles of the modern ‘composable’ digital experience platform (DXP) – a phrase coined by Gartner to describe a platform constructed from multiple independent and interoperable component parts, each best placed to perform a specific function.

This is an alternative approach to the monolithic structure of a classic, all-in-one DXP which tries and usually fails to do it all.

The diagram below illustrates the architecture of a composed DXP, such as a headless CMS, standalone CDP, third-party search provider, a dedicated analytics provider and a specialist marketing engine, to provide features such as content personalisation and other automated marketing capabilities.

Composable architecture is driven by the need for agility, interoperability, scalability and best-of-breed capabilities. Whilst the composable DXP may require multiple subscriptions and some smarter integration, this API-first architecture is a great option for the progressive, performance-driven organisation operating a multichannel strategy.

As with McNamara’s team of experts, this approach provides the marketer with the exact toolset needed, is low maintenance, and performs brilliantly at scale, underpinned by the flexibility to adapt architecture and toolsets in line with internal and external influences and changes.

The classic monolithic DXP architecture, on the other hand, attempts to provide everything under one roof, where each core component is delivered by a single platform and through a single license.

Despite the obvious benefits, the standalone DXP has sometimes struggled to deliver on its promise. These platforms require complex hosting infrastructure and have at times faced issues: performance at scale, unintuitive user experience, escalating costs, and poor utilisation of the platform’s capabilities (often due to lack of parity with specialist vendors). The client is also heavily tied to a single tech stack, hindering their agility to adopt the latest tools and techniques.

So which approach is suitable when?

The composable DXP lends itself to either end of the volume and complexity scale. It is perfect both for small and low-volume sites, where perhaps all that’s needed is a headless CMS to deliver a campaign page, through to a global travel operator requiring the very best technologies to compete in a highly competitive sector with huge seasonal spikes.

The single-solution DXP is best suited to smaller teams and to mid-size and mid-complexity projects that are driven by the need for simplicity, and not by the need for high performance and the latest and greatest tools.

How is the DXP market responding?

Many successful marketers are finding that the most effective solutions for a composed DXP are those built following a MACH architecture.

As described by CMS Wire, MACH architecture is a set of technology principles that typically underpins new, best-of-breed technology platforms as an alternative to traditional monolithic architecture.

The acronym stands for:

The goal of MACH is to break down legacy applications and instead introduce a modular architecture that enables enterprises to be more agile and adapt faster.

Today many of the classic DXP providers are recognising this trend through the introduction of headless options and the acquisition of specialist vendors to build a new breed of API-first CDP. But they still have a way to go.

Episerver’s acquisition of the Optimizely marketing platform; and Sitecore’s acquisitions of Boxever and Four51 commerce, the Moosend email platforms and most recently Reflektion AI-powered search engine are great examples of this direction of travel. Kentico’s headless CMS offering, Kontent, which it built from the ground up as a standalone, API-first, SaaS CMS to serve the modern multichannel business, is another.

The modular approach ensures you can compile the optimal set of capabilities to deliver on your marketing goals. No more feature overlap between systems or wasted license fees on features you don’t even use.

Prepare for the unexpected

On the morning of 11 November 2011, McNamara had not planned to surf and was instead in the water towing some friends. It was then that the opportunity arose. Communicated to him by his wife via walkie talkie, a large set of waves was on the horizon. Garrett jumped on the board he had taken “just in case” and was immediately towed into position by his team-mate. He then caught the biggest wave in history.

Further to this, in January 2013, he went on to break his own world record by surfing an astonishing 100ft wave, proving that the agility afforded to him by the composed approach he set in 2011 was a winning formula. As such, his method has become the de facto way of surfing in Nazaré and has been adopted by all competing teams.

In succeeding to navigate this huge swell, McNamara has also created a new surf tourism industry, which draws huge crowds year-round and has changed the fortunes of Nazaré forever. If you follow his lead, this could be your website/application receiving new-found audience levels compelled by the experience and unrivalled performance.

Much like McNamara, in a world full of such ever-changing conditions, the marketers who not only survive but thrive are those who proactively prepare for the unexpected with the optimal mix of technologies and partnerships to deal with whatever nature throws at them. 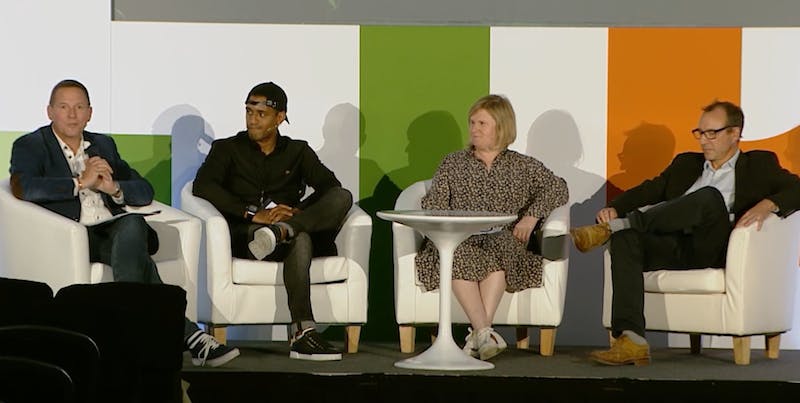 At Ecommerce Expo last week, Richard Robinson, MD of Xeim Engage and Oystercatchers, chaired a panel of agency CEOs and asked them what they see in the future of marketing and ecommerce. Christopher Kenna, Founder & CEO of Brand Advance, a media network that helps advertisers reach diverse communities; Fiona Gordon, CEO of Ogilvy UK; […]