Miles said here’s the nirvana. You walk down the street and see a bus shelter ad. The ad says ‘30% off handbags at [insert retailer]. Today only! Tap here.’

So you tap the bus shelter and the discount token loads on to your consolidated loyalty and payment app. You go to the retailer and pick up the most beautiful, other-worldly handbag, and carry it, as if you already own it, to the till. At the till you tap your phone to the reader and you’ve paid for the bag, with your discount included.

All your friends love the bag! You start to wonder if people love you only for the bag 🙁 Well, we’re not there yet. One of the issues I’d mentioned previously is the seeming roadblock around NFC mobile payment, because of the number of stakeholders involved. Out of home media, platform providers, smartphone manufacturers, networks, finance and others I can’t think of.

However, Weve is worth a look. It’s clear that the UK’s three largest mobile network operators are working together to start solving some of these issues. This could be a very important watch-this-space.

But you’re missing the point

It doesn’t matter yet that payment has some wrinkles to be ironed out. Miles – ‘smartphone NFC has been badged with payments, which is a bit of a shame’ when we’re not there yet with payment infrastructure.

But, the key, as Miles points out, is to create magical experiences. That’s what us marketers have always tried to do, right? Experience is key. Just check out MoMaMa.

As with QR, some of the implementations of NFC have been poorly thought out, and don’t offer enough of a reward to the consumer.

There’s a big education piece to be undertaken, Miles argues. 20 to 30 Year olds are all very used to using their phones in a variety of ways, and won’t be shy to use NFC. But we need to provide stuff that’s actually worth redeeming.

So give us some examples.

There are quite a few good campaigns where Proxama was involved, and you can view these on the website, with associated metrics.

Recently Proxama worked with Orange and Eat on Quick Tap Treats (QTT) an NFC voucher and loyalty service which is being delivered through its retail partners to Orange customers. The service was launched in March 2012 across 114 EAT. stores nationwide. It is the UK’s first large scale NFC marketing campaign.

The EAT. campaign enables customers with Orange NFC-enabled phones to tap posters located in EAT. stores. Each tap spins a “wheel of fortune” which randomly selects a treat. After three spins the customer can select a treat to redeem in-store

Altogether there were 24,614 transactions over the two months, working out to 410 transactions per day. Three fifths of consumers also purchased other additional items simultaneously when collecting their treats.

So, we can see that something worth redeeming will be redeemed. I’ve had the earworm of Marley’s Redemption Song in my head whilst writing this. Interestingly, these rewards were served via a unique code on the app, and tapped into the till by the Eat staff. So there are lots and lots of use cases, even before payment and loyalty is linked up, and before the infrastructure aligns.

And the key is how we can change physical spaces out of home.

Physical stores can drive better deals and reduce showrooming by effectively using NFC. Tags on products can give details about stock, delivery, and the product spec, perhaps reducing the chance consumers will be over on Amazon.

Potentially, affiliate deals can be run from outdoor panels by companies like Clear Channel and JC Decaux.

Google are driving a lot of local marketing and innovation, but less in the physical space. NFC may be well placed to eventually tie up Google Wallet with a loyalty app. Miles seems confident the iPhone will adopt NFC next time round. And he argues that Apple have a history of coming in late on and vastly improving experiences.

Marketers have let us down with QR codes and NFC in some cases. We need to start some magical, enticing campaigns.

This, and the growth of NFC enabled handsets, and the greater collaboration between mobile networks, means that before long, we might just see consolidated loyalty and payment that the consumer wants.

The World Wide Web Consortium (W3C) is working to release a global data standard for the inclusion of a data layer to sit on top of your site that will help improve developers’ lives in a variety of ways.

This isn’t a topic that generally gets much coverage, so what is a data layer?

In May there were 2.5 million searches for hotel-related keywords on Google.co.uk, of which 522,115 were made on mobile devices.

According to a new report from Greenlight Digital, queries for hotels in domestic destinations accounted for 54% of all searches using desktop and 59% of all queries made using mobile devices.

And with 33,100 searches the term ‘hotels’ proved to be the most common query, accounting for 6% of all mobile searches.

Stats from Google show that 55% of mobile search conversions take place within an hour and the use of mobile search is constantly growing, so it’s too big an opportunity for hotel brands to ignore.

But are they properly set up to take advantage of this user behaviour by optimising for mobile? I searched for the term ‘hotels’ on my Android smartphone to find out… 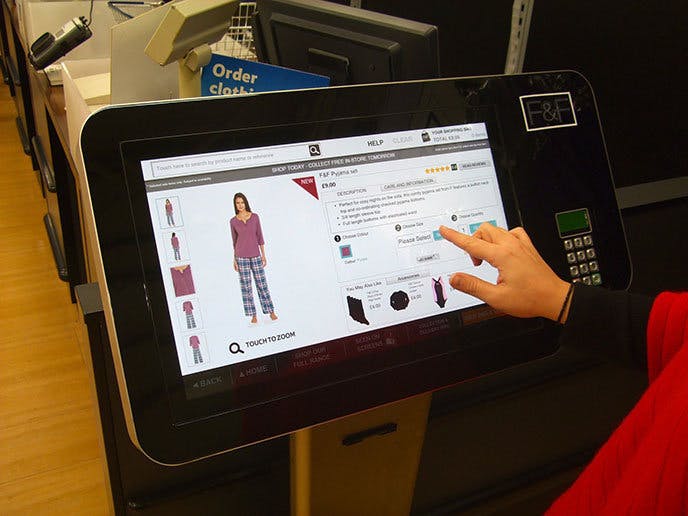 The use of digital technology in bricks and mortar stores has increased rapidly over the last few years.

I’ve deliberately excluded mobile here, as that will be the topic of my next article, but here are a few examples of how retailers are using interactive mirrors, video, and touchscreens to enchance the in-store experience for shoppers.