Before you get stuck into that stack of choccy eggs, don’t forget to sample the finest digital marketing stats around this week.

The roundup includes news about US ad spend, programmatic budgets, and online influencers. Check out the Internet Statistics Compendium for lots more to boot.

From a survey of 2,000 consumers in the UK, France, and Germany, Rich Relevance has discovered that there are still barriers preventing people from switching from in-store to online grocery shopping.

Despite the fact that 53% of the UK population now buy groceries online – falling to 40% and 32% in France and Germany respectively – consumers expect more from their experience.

53% say that they would be happy for their retailer to automatically re-order frequently bought items. Meanwhile, 55% of consumers would like grocery retailers to offer recipe ideas based on what they are adding to their cart.

When it comes to consumers that don’t shop for groceries online, 51% say the reason is a lack of trust in retailers picking the freshest produce on their behalf, while 68% say they prefer to physically handle items themselves in-store. 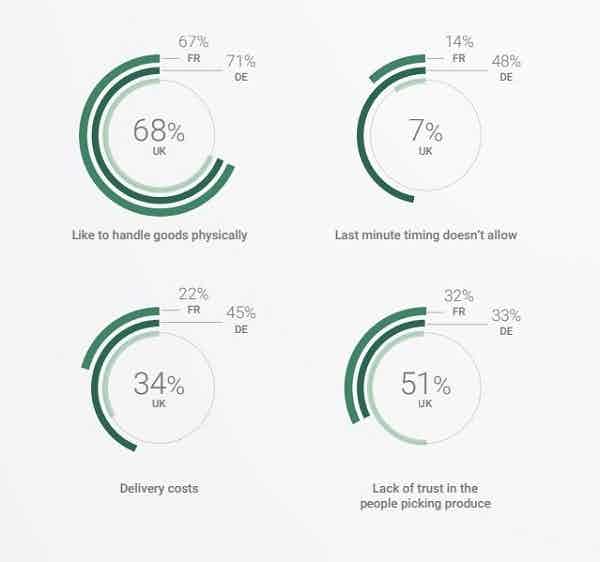 US TV ad spend predicted to decline further in 2018

Overall, this will bring TV’s share of ad spend down to less than a third of US ad revenue in 2018.

A new report by Qubit, which is based on the analysis of 1.2 billion customer interactions, has delved into the causes of low mobile conversion.

While the assumption might be that payment methods are the biggest barrier for mobile shoppers, Qubit’s research found that problems tend to occur much earlier in the funnel.

47% of respondents said that they would complete more purchases via mobile if ‘the browsing experience was easier or faster’. Similarly, 44% said they would if ‘it was easier to find exactly what I want.’

A better mobile UX doesn’t just lead to more mobile conversions either. Mobile discovery is said to have a direct impact on cross-channel sales, increasing revenue by around 19%. 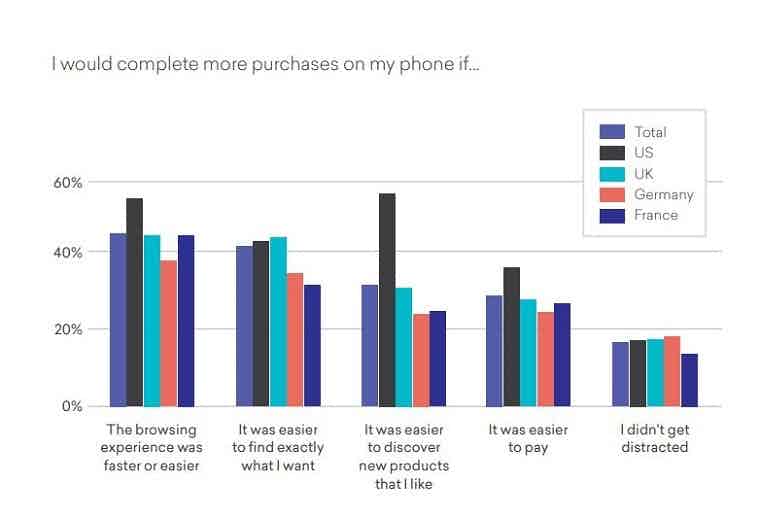 A new study by Infectious Media has revealed that the inability to effectively measure campaigns is preventing advertisers from further investing in programmatic.

From a survey of more than 200 decision-makers in EMEA, APAC and North America, it found that almost 90% of marketers would be able to justify ‘slightly’ or ‘significantly’ more investment in programmatic with better measurement. 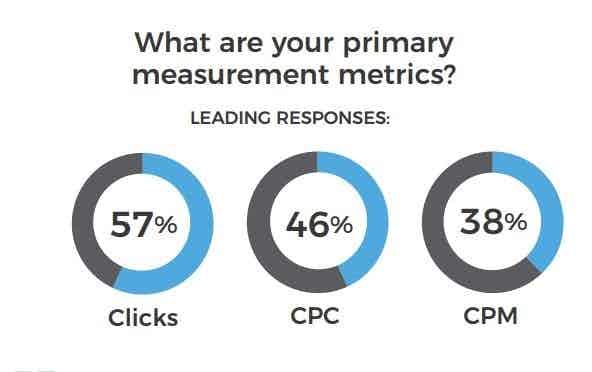 56% think that most mobile ads are boring or dull

Verve has found that generic mobile ads generate little engagement. From a survey of 2,000 UK adults, it found that just 17% of people are ‘likely’ or ‘very likely’ to interact with a generic ad on their phones, while 56% think that most mobile ads are boring or dull.

As a result, brands need to do more to pique user interest, which means making mobile ads much more relevant to individuals.

Verve found that mobile ads which reference the user’s interests or location drives twice as much engagement as generic mobile ads. Dynamic ads (that use phone mechanics to tilt, tap, zoom or zoom) were also found to increase engagement by 20%, while interactive ads that ask questions can do so by 21%.

Do all influencers have an impact on consumer behaviour?

A new study by Fullscreen Media has attempted to find the answer, analysing 31,802 influencers with a range of followings, and surveying 1,200 individuals aged 18-34 who have in some way interacted with their branded content.

Overall, it found that digital creators (i.e. those with one to 19 million followers) have the highest cross-social engagement rate among influencer segments – ranging from 50% to 88% higher than celebrities and micro-influencers. This is said to be the ‘sweet spot’ for engagement, resulting in the greatest impact on purchasing decisions.

While micro-influencers (those with 250,000 to 999,000 followers) generated the lowest engagement rate among the four measured Influencer segments, this group is still fairly effective at driving purchases. 26.9% of people that viewed or interacted with micro-influencer content went on to make a purchase, compared with just 20.4% who interacted with celebrity content. 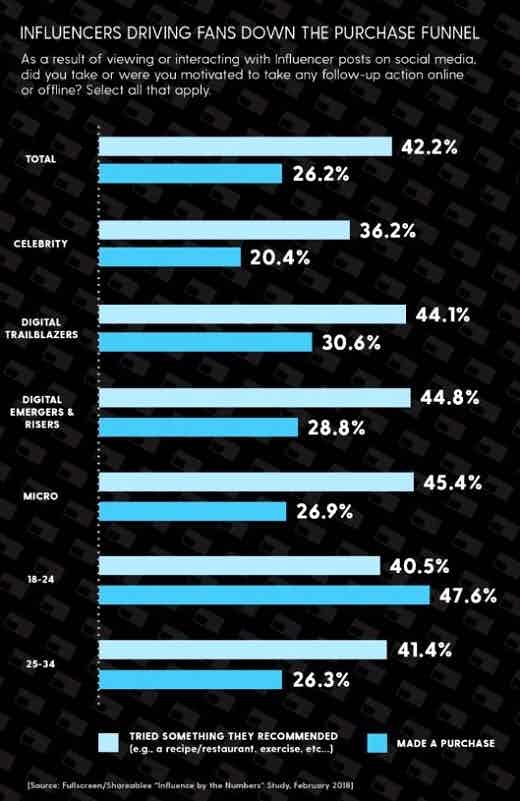 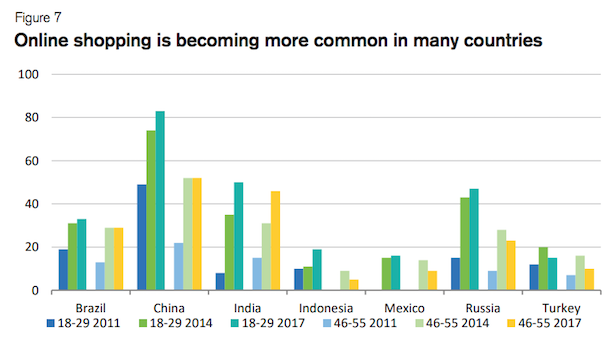 Here’s your latest roundup of Asia-Pacific digital marketing stats, with some great research on ecommerce, payment, industry salaries and adspend.

You can get even more in Econsultancy’s Internet Statistics Compendium. On we go… 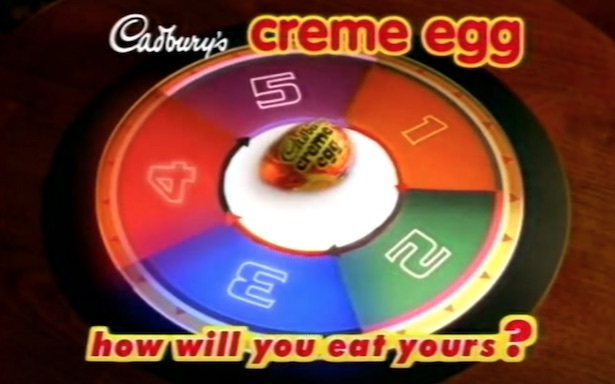 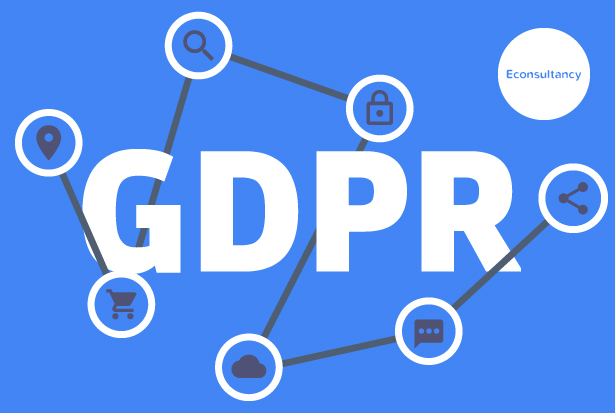 As its co-founder and CEO prepares to testify later today before the United States House of Representatives in the wake of the Cambridge Analytica scandal, a reeling Facebook is being urged to adopt the GDPR globally.