As always, head on over to the Internet Statistics Database where you’ll find further stats and insight.

Only 4% of people in the UK trust influencers

A new survey by YouGov and Grey London has revealed the growing distrust that consumers feel towards social media and influencers. The survey found that 41% of regular social media users in the UK say they have seen inaccurate content over the last month, while 17% of mainstream social media users say they’ve seen completely false content.

In terms of honesty from people they follow on social media, 25% of regular users say that the profiles of their family give a ‘very honest’ portrayal. Meanwhile, 48% of users believe that profiles of celebrities are either ‘not at all’ or ‘somewhat dishonest’, and only 22% believe that they are completely honest.

Interestingly, dishonest portrayals from friends and family are less likely to bother mainstream users compared to celebrities (35% vs 46%). In comparison, 54% of users are bothered when an influencer portrays themselves dishonestly. This shows the higher standard that this group is often held to when it comes to perceptions of authenticity. Only 4% of UK social media users in the survey said they trust influencers. 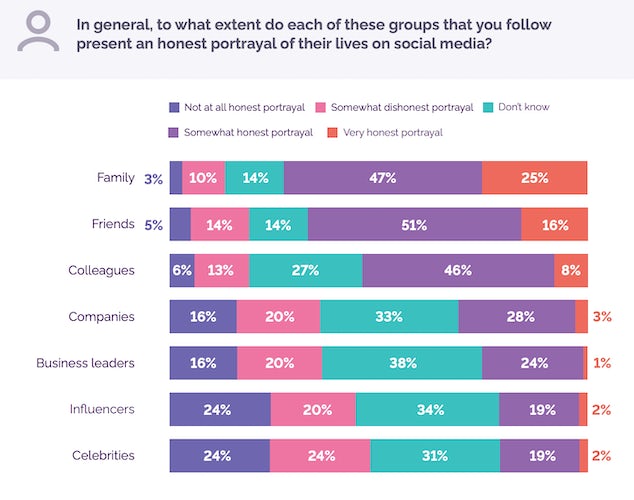 Automation will replace 1.06 million knowledge-based jobs in 2020, according to Forrester’s 2020 Predictions report.  This refers to any jobs from ‘cubicle, coordinator, and function-specific knowledge worker personas’ (yikes).

In contrast to this, Forrester predicts that 331,500 net jobs which require intuition, empathy, and physical and mental agility will be added in 2020. This means ‘cross-domain knowledge workers, teachers/explainers, and digital elites’.

Elsewhere, the report reveals that customer service is the most important driver category of customer experience quality across most industries and markets. In short: human channels still matter. So, while contact centres are predicted to reduce their quality assurance staff by 40% due to automation, other technologies will be introduced to help customer service reps find critical information and enhance the customer experience. 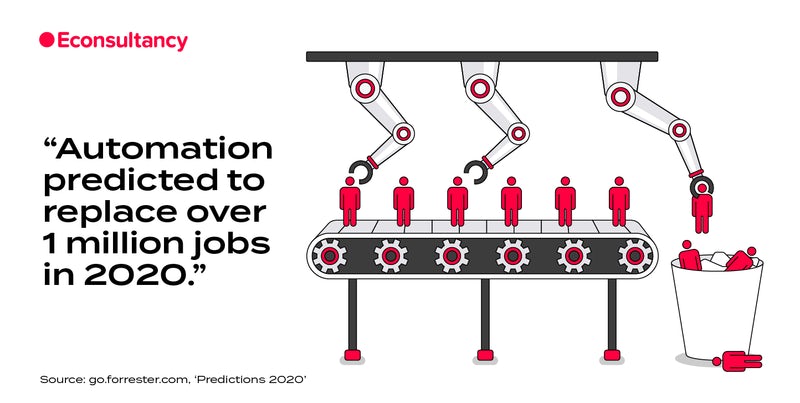 Twitch, Wish, and Snapchat the top apps among Gen Z

With 98% of Generation Z reported to now own a smartphone, a new report from App Annie explores how brands can best reach them on mobile devices.

The report states that, on average, Generation Z spends 3.7 hours a month on each of the top non-gaming apps. However, they break up that time among 150 user sessions monthly – 55% more sessions than older generations.

For advertisers, this means that contextual ads (that are relevant to various usage occasions throughout the day) are the most effective for reaching this demographic.

App Annie also states that Snapchat, Twitch, and Wish are the overall top-ranking apps among Generation Z. This aligns with the fact that ‘filling up spare time’ and ‘finding entertaining content’ are first and second most-important reasons Gen Z use social media, while ‘staying in touch with friends’ is the third. Apps in entertainment categories therefore offer the biggest opportunities for brands looking to increase reach. 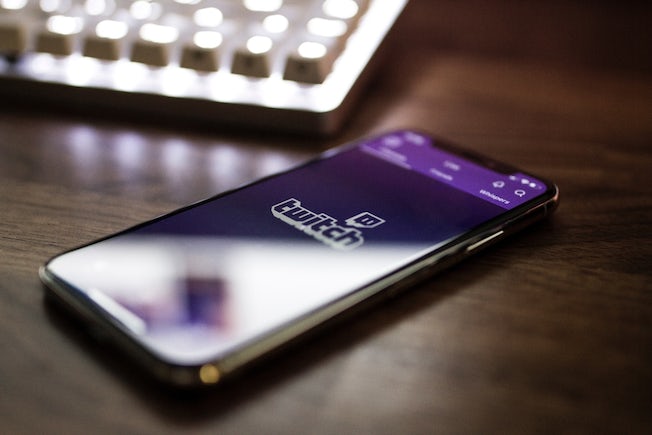 A study by Monetate has found that customers acquired the previous holiday season were more than twice as likely to convert the following holiday season compared to other customers.

From the analysis of 8.52 million customers across the 2017 and 2018 holiday seasons, Monetate discovered that customers who returned for the next holiday season were significantly more valuable. The average conversion rate for all returning customers is 2%, however, retained customers from the previous holiday season converted at 4.2%.

The study also compared the relative conversion rates of retained holiday customers across several major referring sites including Google, Bing, Facebook and Instagram, as well as visitors who navigated directly to the site. It found that those coming from Bing and Yahoo have consistently higher conversion rates. Retained Bing customers convert at 8%, which is four times the typical returning customer.

Additionally, customers who came to a brand’s website first via Facebook and were engaged enough to come back the following holiday season are nearly 70% more likely to purchase than the first year. 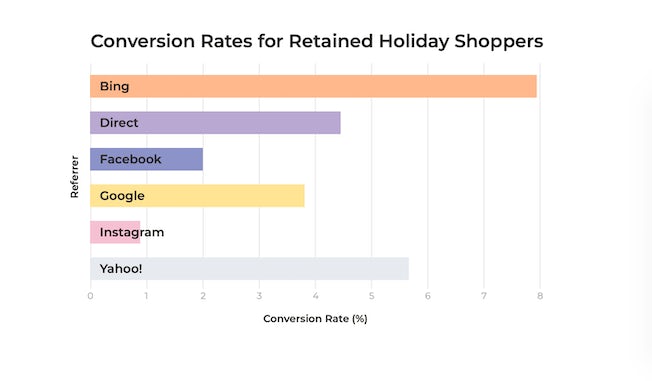 New research from Rakuten marketing has revealed that UK brands are soaring in popularity among international shoppers. The study – which surveyed 5,000 global consumers – found that 45% of European and APAC shoppers are looking to make a holiday purchase from the UK, making British brands most popular among those looking to purchase internationally.

Meanwhile in the UK, 15% of consumers will make purchases for over 11 people, compared to just 3% of Germans who will buy this many presents. 72% of Brits are looking to buy gifts for at least three recipients or more this Christmas.

In terms of where consumers plan to shop, nearly two fifths of shoppers internationally are considering alternatives to Amazon. Over 57% of UK consumers will look to Boots, with 37% and 30% choosing British department stores Debenhams and John Lewis respectively. Finally, Marks & Spencer is the fashion brand most Brits will consider buying gifts from this holiday season, followed by Nike and Adidas. 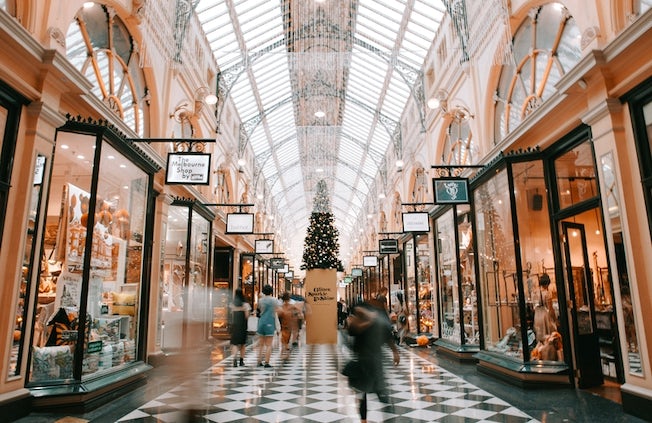 New research findings from the DMA challenge the belief that consumers typically switch brands due to a bad experience with an existing one.

Out of the 61% of customers surveyed who stated that they switched at least one brand in the last 12 months – 58% said they did so ‘to get a cheaper price’ for the product or service in question. However, 57% also stated ‘better value’, and 31% said ‘brands that better meet personal needs’ as the reason. 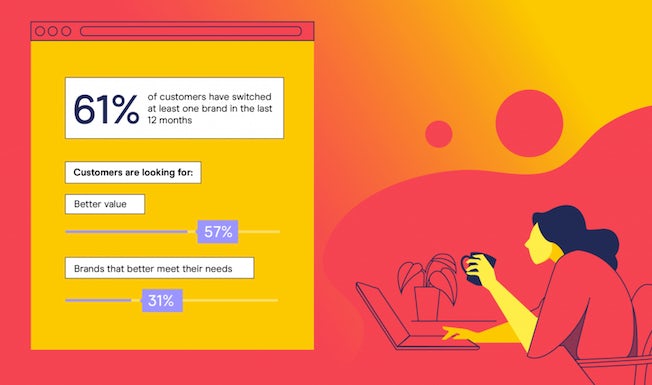 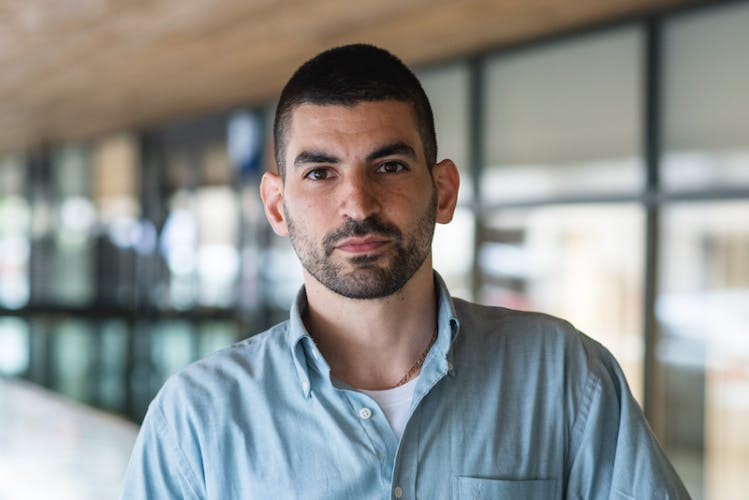 Cameron Worth is CEO and founder of SharpEnd – The Agency of Things. The agency was named as a ‘One to Watch’ in Econsultancy’s Top 100 Digital Agencies 2019 report, sponsored by MiQ. Here’s what his day-to-day looks like, complete with dog pilates… Please describe your job: What do you do? Cameron Worth: I’m the […] 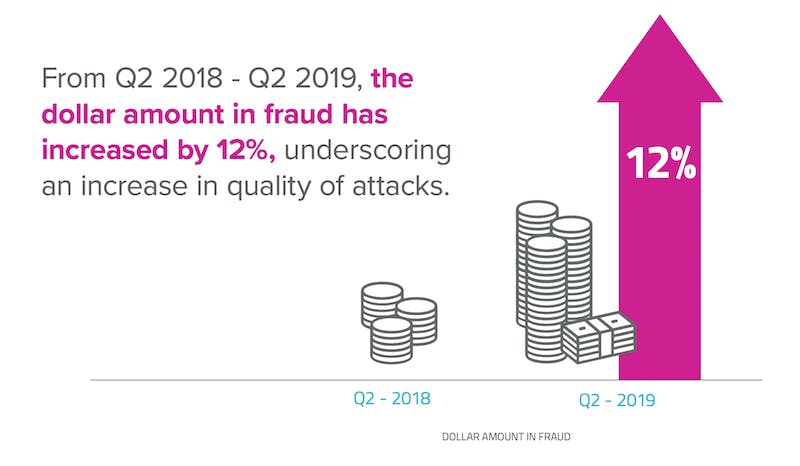 Ecommerce fraud is up according to fraud prevention firm Forter and its 2019 Fraud Attack Index highlights some disturbing trends in the $140bn a year online retail market. 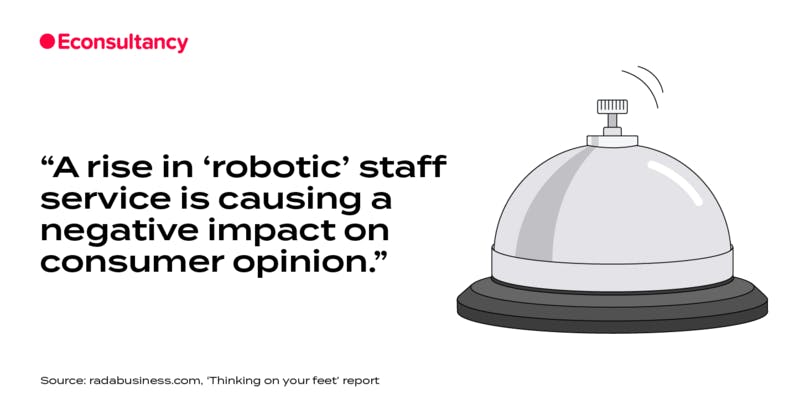 Settle down for this week’s stats, which includes topics like customer service, ad spend, and brand engagement.