Read on for news about resale shopping, seasonal advertising, influencer activity, and lots more. And check out the Internet Statistics Database as always.

’Tis the season for shopping second-hand, according to new research by Deloitte.

In a survey of 1,200 US consumers, it was found that 27% of Christmas shoppers plan to gift resale items this year (but mostly to close friends and family). This figure rises to 43% of millennials and 61% of Gen Z consumers who plan to recycle or upcycle a gift this year.

When it comes to the reasons why, 50% of consumers say saving money, 24% say being able to afford a luxury or premium brand, and 13% say the opportunity to be more sustainably-focused.

What is recommerce and why is it growing in popularity?

Opportunity for advertisers to target consumers during ‘Chrimbo limbo’

New research from eBay Advertising UK suggests that there is an untapped opportunity for advertisers to engage with consumers during the period between Christmas and New Year’s Day – otherwise known as ‘Chrimbo limbo’.

This stems from the fact that daily searches on ebay.co.uk rose 62% in the three days following 25th December last year, and remained consistently high for the final days of 2018.

Daily searches on ebay.co.uk for ‘Xbox’ jumped 71% overnight and rose a further 31% on Boxing Day. Similarly, searches for ‘iPhone’ and ‘Mulberry Handbag’ surged 70% and 85% respectively on 25th December and rose a further 22% and 33% the following day. eBay suggests this was due to shoppers being left disappointed by their presents, and instead choosing to look for the gifts that they didn’t receive themselves. 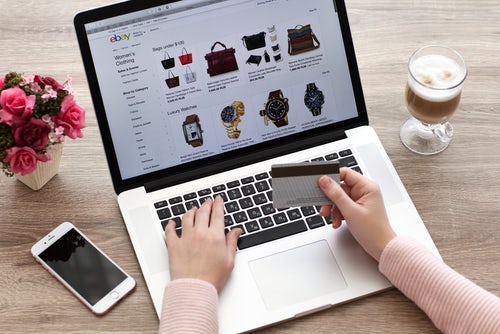 As part of Product of the Year, Kantar has surveyed more than 10,000 UK consumers to find out the most important factors when choosing which products to buy.

The survey found that 35% of UK consumers choose products that have a positive impact on their health and wellbeing, while 21% go for products with eco-friendly packaging. 19% cite ethical sourcing as a key factor in choosing one product over another.

Meanwhile, the survey also delved into the primary influences for consumers trying a new product. Perhaps unsurprisingly, 52% cite recommendations from family and friends as the most significant influence.

A new study by MiQ has revealed that the majority of people would prefer free or ad-supported content rather than ad-free content via a subscription service.

In a survey of 5,630 consumers across eight countries, 78% of consumers globally said they don’t like ads, however, they still wouldn’t pay for ad-free versions of most of their preferred content. What’s more, 51% think advertising in the content they watch or read is a necessary trade-off to get free or cheaper content.

Finally, the survey found that 34% of respondents also expect to spend more on or subscribe to more subscription services in the next five years.

Klear’s ‘2019 State of Influencer Marketing’ report has revealed that there has been a 48% increase in Instagram influencer activity in 2019 – a 9% increase from 2018 growth figures.

This stems from Klear’s analysis of over three million sponsored posts (i.e. posts marked with #ad) on Instagram throughout the year.

Elsewhere, the report suggests that women typically dominate influencer marketing, making up 84% of the industry. In contrast, Instagram’s overall global user base is 52% female and 48% male. Millennials also dominate the field, with 54% of all influencer content being created by those between the age of 25 and 34. Instagram’s global user base is 34% 25 to 34, which is the largest demographic, but not as dominant as the influencer space. 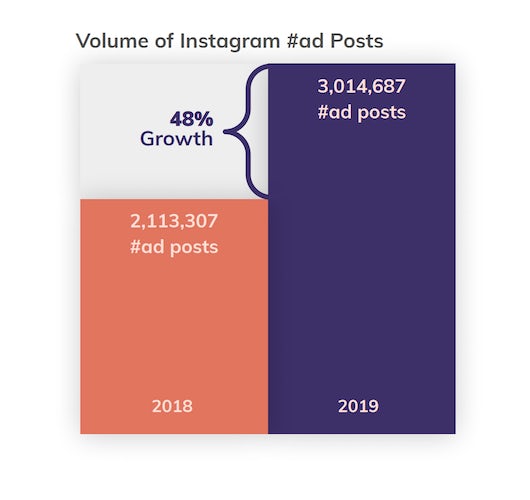 The seven signs your company isn’t ready for influencer marketing

Retention rate is a key metric for mobile marketing, as engaged users are more likely to generate revenue by making in-app purchases or interacting with ads. In a new study, Apps Flyer has analysed the retention performance of over 15,000 apps with marketing spend (at least 1,000 non-organic installs per country per month).

Results suggest that 2019 was a tough year for retention rates. While organic rates slightly improved, non-organic rates dropped by as much as 8%. When comparing organic vs. non-organic users, the former dominated, particularly in terms of longer-term retention; a 25% and 32% difference was recorded in Day 30 and Week eight, respectively.

In terms of device, the report also states that iOS users deliver up to 10% higher daily retention than Android users, and 35% more on Week eight. 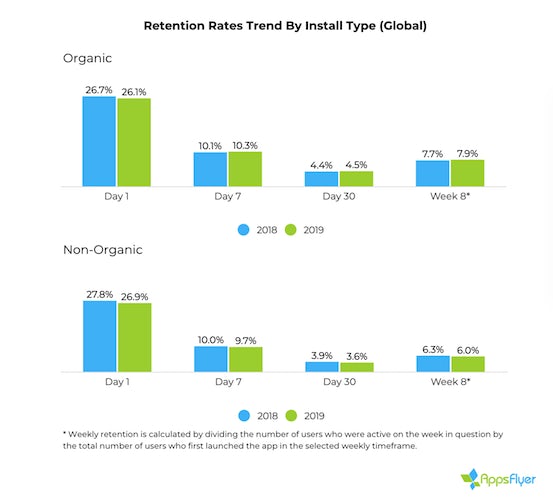 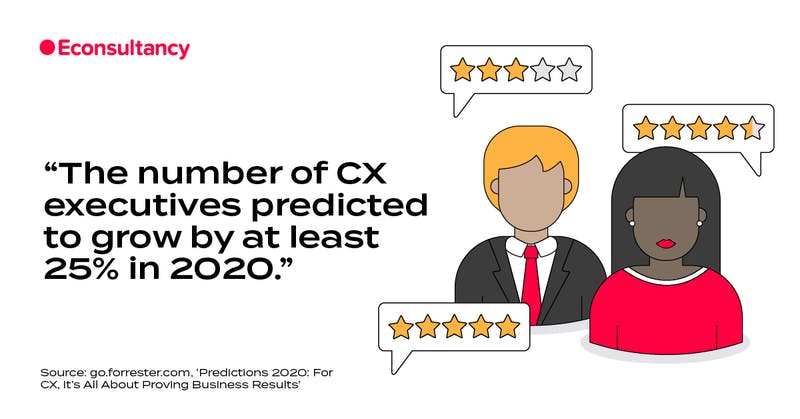 The year is coming to a close, with continued unease about data collection and targeting, heaps of sentiment we call ‘brand purpose’, confusion about real-time bidding and EU regulation, a feeling in some quarters of ’emperor’s new clothes’ about personalisation and customer experience, and that’s just the good news!