This time we’ll be covering fake reviews, political campaigns, TV advertising and more. If that’s not enough, head on over to the Internet Statistics Database.

A study from Bazaarvoice claims that 72% of consumers from the US, UK, France, Germany and Australia believe that stricter procedures should be put in place to tackle fake reviews posted on retail websites.

The most popular rule that respondents said they’d like enforced is that only verified customers should be permitted to post reviews (43%). Requiring shoppers to try and test products before launch, as well as daily assessment of the reviews posted to a brands’ website, came in second and third place with 38% and 34% approval respectively.

Participants from the UK believe that a fine of 12% of total revenue would be the most fitting penalty for brands who breach these standards, but this may not be as severe when compared to the sales lost through lack of trust if reviews are thought to be fake or otherwise manipulated. Indeed, further results showed that 48% of UK consumers would not buy a product online if they suspected foul play, and 43% said that their trust in the brand would be lost. As a result, a significant 78% claimed that they would stop purchasing from a brand after they were deemed untrustworthy.

The top triggers for consumers when trying to spot suspicious reviews were identified as similar phrasing across multiple posts, as well as too many 5-star ratings.

Recent data published by Brandwatch suggests that as many as 42% of the British public continue to obtain coronavirus information from social media platforms.

The findings, collated from the responses of more than 2000 UK adults, showed that while the majority (69%) use news outlets, there remains a worryingly large proportion that rely on social platforms for updates on the virus.

Earlier this month, Facebook, Google and Twitter announced that they were working with the World Health Organisation to crack down on the spread of misinformation about the outbreak by removing posts promoting conspiracy theories and false cures. However, the deluge of recent activity on these platforms has proven almost impossible to control, despite the platforms’ best efforts to point people in the direction of correct and accurate information.

It is therefore difficult to tell how much of this coronavirus content is factual vs. conjecture. Then again, it is important to note that although much more reliable than uncorroborated Twitter commentary, some news outlets may also be dubiously trustworthy.

Additional results from the study claimed that nearly a quarter of respondents received updates from friends and family, thereby making room for further levels of speculation and rumour. In contrast, just 16% said that healthcare professionals were one of their sources for updates and advice, ranking as the least used information resource of all categories measured in the survey. 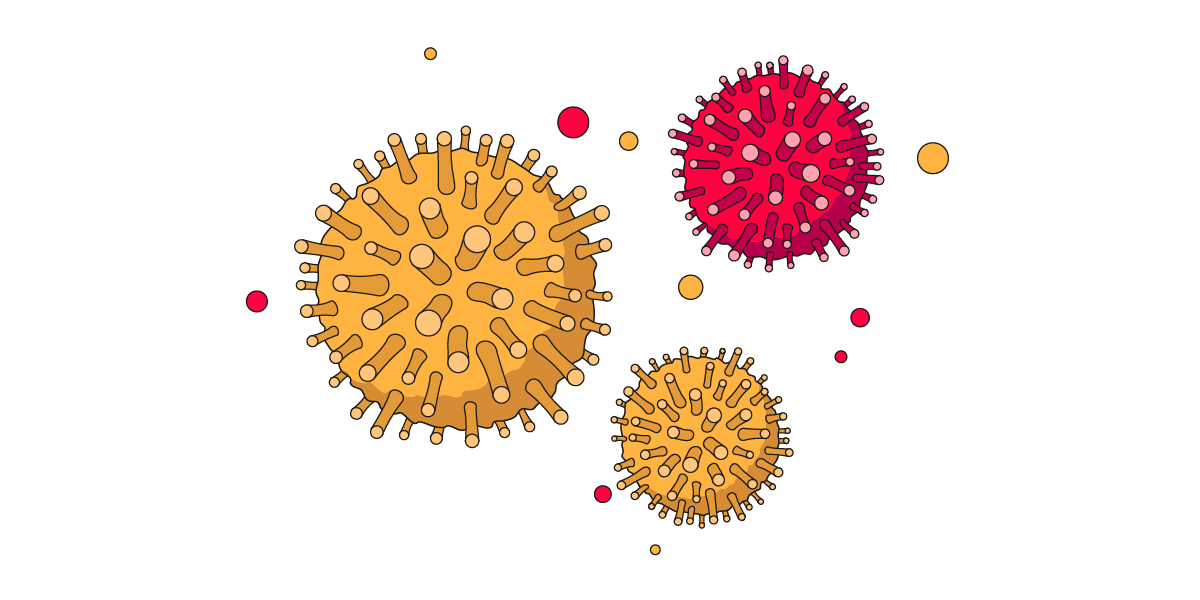 Coronavirus: how travel and hospitality brands should respond

72% of Americans believe that no personal data should be shared with political campaigns looking to target voters online, according to analytics brand Gallup.

Interestingly, this view is shared evenly amongst those of differing political allegiance in the US, with 69% of Democrats, 72% of independents and 75% of Republicans all in agreement.

A fifth of those surveyed felt it was appropriate for campaigns to be able to view basic information about internet users such as their age, gender and zip code, but remain limited to these broad categories to protect privacy. Just 7% were happy to disclose any available online information about themselves, including very specified data.

It also appears that the American public would prefer to receive information about those targeting them than to disclose anything about themselves. Fifty-nine percent stated that it should be compulsory for websites to reveal the source of political ads, including who had paid for it, the amount spent on the campaign and its intended target audience. This would certainly improve transparency, as well as accountability if an ad was proven to be deceptive or factually incorrect.

Meanwhile, one in five thought that no political ads should be shown on websites at any time, in order to stop political parties targeting voters online. 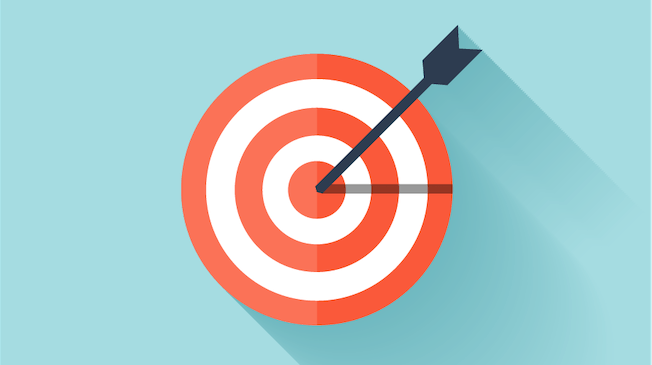 A YouGov study published on International Women’s Day has revealed that 48% of British adults think that female objectification in advertising is unchanged or worse than it was five years ago.

Troublingly, the largest proportion of respondents – 36% – claim that objectification has remained the same as it was in 2015. Furthermore, of those who believe the situation has improved over this time period, a tiny 7% said that women were ‘much less’ objectified, while 29% said ‘a little less’.

Views are more upbeat when it comes to overall female representation in advertising, as almost half claim that they have seen women portrayed more positively than they were five years ago – although it is worth noting that just 7% said this was a ‘much more’ positive change (as opposed to a slight change).

It appears, however, that the greatest transformation is being seen in the representation of women from ethnic minority groups. Sixty-five percent stated that they had observed either ‘a little’ or ‘much more’ representation of this group compared to 2015, which although isn’t necessarily an overwhelming majority seems to be a much bigger step in the right direction.

The results from these three surveys suggest that consumers aren’t noticing really powerful positive change in the way women are portrayed in advertising; instead they are observing mostly small changes over prolonged periods of time. As a result, marketers must improve their efforts to convince them that they are treating the issue with the upmost importance.

36% of Gen X are exposed to new brands through TV advertising, according to data from GlobalWebIndex.

Known as the ‘forgotten generation’, and sandwiched between baby boomers and millennials, the study has shed light on the way in which people born between 1964 and 1982 use different types of media and are therefore exposed to brand advertising.

Despite the growing popularity of streaming services, Gen X continue to watch linear TV channels for an average of 2 hours a day – 23 minutes longer than millennials and 45 minutes longer than Gen Z do. As a result, their exposure to traditional TV advertising is heightened compared to that of the generations that come after them, but second to that of baby boomers (42% of which find new brands through TV).

While Gen X are slowly adopting a more digital approach when it comes to watching TV, only a quarter of them watch via online streaming services on mobile devices, instead preferring to watch on TV sets they grew accustomed to in their youth (34%).

However, this isn’t to say that Gen X are shying away from technology. One in six state that they are constantly connected to online platforms, and they spend around two hours on average on social media each day – a figure which is gradually rising.

This data proves that marketers should target the Gen X audience using a wide variety of channels to reflect their technology use, rather than a digital-first approach adopted for their counterparts in younger generations.

A report from Poq Commerce states that retailers saw a 42.2% year-on-year increase in app downloads during Cyber Week 2019. The most downloads were recorded during the 24 hours covering Black Friday (the day after Thanksgiving) which fell on 29th November last year.

This rapid rise in app downloads echoes changes in consumer shopping behaviour whereby many prefer to keep updated with the early holiday sales via mobile devices, aided by push notifications and so on. 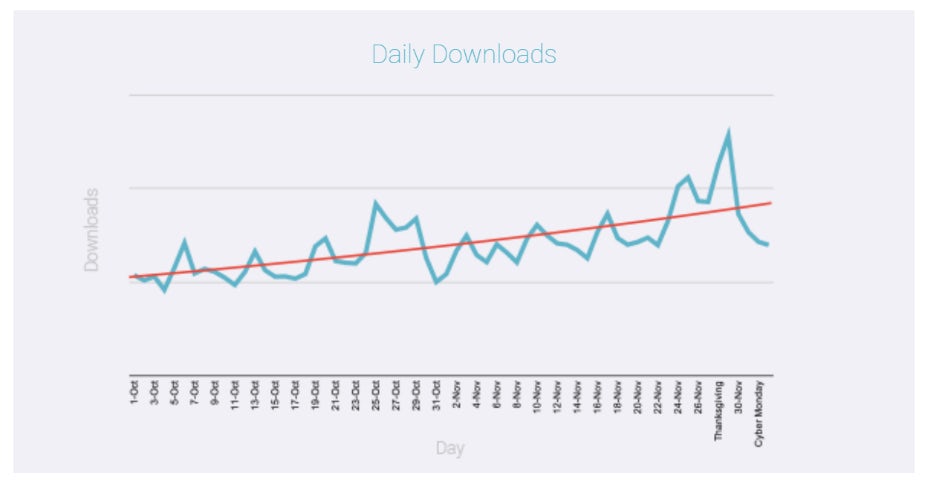 The study measured a total of 387,000 hours spent by users on retail apps on Black Friday alone. Consumers were also 16% quicker than usual to add an item to their shopping basket during Cyber Week, proving a higher intent to purchase than any other week during the year. Perhaps unsurprisingly, retailers found that using the word ‘deal’ in app push notifications sparked the most engagement and sales compared to using alternative copy.

Meanwhile, there was a 33.3% increase in shopping app downloads (YoY) over the whole of Q4 2019, which covers a range of shopping events including Cyber Week, Christmas shopping and Boxing Day sales, all of which contribute to a higher sales volume and spend over this period.

It is predicted that shopping apps will make up 25% of all online traffic for retailers that have one by the end of 2020. 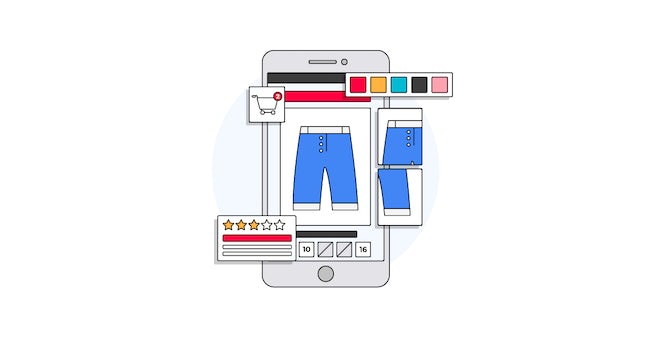 Tone of voice (ToV) is extremely important when you’re trying to build a distinctive brand. It’s the personality of your business; the thing people will remember you by.