The countdown to the holidays is now well underway. As such, our November roundup remains largely focused on Christmas and Black Friday campaigns as retailers battle it out for a cut of what is set to be a record festive consumer spending spree.

Additionally, there have been a number of charity activations from the likes of Movember, Women’s Aid and WaterAid, bringing their causes into the spotlight ahead of the season of giving.

In an attempt to push its new Blue subscription to eligible users in the US, Canada, Australia and New Zealand, Twitter has launched a social-first activation outlining its key features.

The hero ad, as shared on social media, mirrors an eighties workout video and features four prominent comedic tweeters: Dana Donnelly, Meg Stalter, Boman and Prance. Together, they flex their fingers in preparation for a Twitter experience that’s “faster, stronger, harder and smarter”, while demonstrating the benefits of the subscription service.

This light-hearted and humorous approach reflects the sentiment of much of the Twitter community, as well as of the comedians themselves as Twitter looks to encourage its Millennial and Gen Z audience to sign up to Blue.

It’s time to flex those Twitter fingers and take it to the next level ????

Twitter Blue is now available for subscription in the US, New Zealand, Canada, and Australia on iOS, Android, and web pic.twitter.com/if3wXfoGpB

Electronics company Philips has partnered with Movember to support its mission to improve men’s health, whether that be mental health and suicide prevention or awareness of common cancers.

In a social-first campaign, aptly named ‘Right Under Your Nose’, a series of very short, tongue-in-cheek spots outline the simple ways each and every man can look after their own health and support the wider Movember cause. Advice ranges from having conversations about these important topics with friends, to contacting your doctor for over-50 PSA tests, and regularly checking yourself for any abnormalities.

“Changing the face of men’s health is simpler than you think,” the brand’s website states, “The solution is right under your nose.”

Alongside the ads, Philips has been uploading a series of posts it calls ‘Meet a Mo’, which feature different moustache styles for Movember inspiration, each coinciding with one of its social ad spots.

Ahead of Black Friday weekend, Asos looked to instill a sense of calm amongst its customers and followers. The discounting event, which takes place on the fourth Friday in November, is often associated with panic buying and impulse purchases, and often involves a bombardment of ads from a multitude of different retailers.

Asos cut through this noise with a series of Top View TikTok ads showcasing its USP – fashion all in one place – reminding viewers to “stay blessed, never stressed” just in time for the sales to begin on the 26th.

These ads featured prominent TikTok creators including Bash The Entertainer and Zaina Sarah to appeal to the younger cohorts of Asos’ target audience. Videos under the #AsosChaosToCalm hashtag have received a total 1.3 billion views since its inception in mid-November, with TikTokers posting their own Black Friday finds from the platform behind a specially designed promotional filter.

Renowned charity Women’s Aid has released a brand-new campaign called Spot The Abuse. A 2-minute film, shared to its social media accounts, spoofs a TV game show in which female contestants have to answer whether or not scenarios described by the host count as forms of abusive behaviour.

The garish environment combined with the serious topic at hand results in a rather uncomfortable juxtaposition which only makes the film more arresting and engaging to watch.

Its host outlines several instances of coercive control to highlight how abuse does not always present itself through physical injury, and can instead be something as simple as controlling what your partner wears or who they are allowed to socialise with.

The campaign was unveiled in conjunction with the UN’s International Day for The Elimination of Violence Against Women on November 25th.

Many of us find it difficult to spot the signs of abuse. Coercive control can happen gradually, making it feel 'normal'.

If something doesn't feel right in your relationship, it probably isn't. We're here to support you.

WaterAid: Best Seat in the House

WaterAid teamed up with The Rankin Agency this month to tackle the issue of poor sanitation and diarrhoeal diseases in developing countries, in conjunction with World Toilet Day on November 19th.

According to the charity, one in every five people around the world do not have access to a decent toilet in their homes, which affects hygiene, health and safety – particularly among women and girls. The same can also be said of a third of all school properties globally.

Consequently, a group of twenty five artists and people of note have each designed one in a series of toilet seats which were then photographed for an online gallery to raise awareness of WaterAid’s work in combatting the problem.

The ‘galloory’ features work by well-known figures including comedian Harry Hill, musician Boy George and graffiti artist BAMBI among others, and can be found on WaterAid’s official website. Images of the seats have also been posted to its social channels, alongside a explanatory behind-the-scenes film, all of which have received positive reception from followers.

Online department store Very is encouraging families to submit pictures of themselves in Christmas-themed pyjamas under the TikTok hashtag #VeryPJPortraits.

The campaign hopes to capture and celebrate the season’s sentiment of togetherness which was arguably absent last year after a last minute Covid-19 lockdown threw plans into disarray. Headed up by TV personality and Diversity member Perry Kiely, its launch ad features a number of influencers’ families, big and small, posing for the camera in matching pyjamas, all of which are available from the Very website.

Those to who take part in the hashtag challenge will be entered to win a brand new TV worth more than £1000, just in time for everyone to gather around it on the big day itself.

So far, the brand’s ad has garnered 209k likes on TikTok, while the hashtag has been viewed a massive 1.5 billion times since the campaign was launched.

The annual battle of the Christmas ads returned once more in November. PR Week has confirmed that John Lewis’ Unexpected Guest ad outstripped its rivals for the most mentions (35.2% of share) across social media channels as consumers weighed in on the latest in a long line of its famous festive activations. Aldi’s ‘A Christmas Carrot’ ranked a fairly close second, raking in 28% of mentions on social platforms like Twitter and Facebook.

Despite this, further research from the publication, in partnership with analytics firm Talkwalker, revealed ads from other big retailers obtained higher scores for engagement and positive sentiment. Aldi’s social team won the battle of engagement by receiving nearly 45,000 interactions with its launch tweet containing the ad.

Meanwhile, Lidl’s Christmas campaign, which depicts a festive season from the future, saw the highest amount of positive sentiment towards its ad (76%). Sainsbury’s came in second place for the metric (61%). 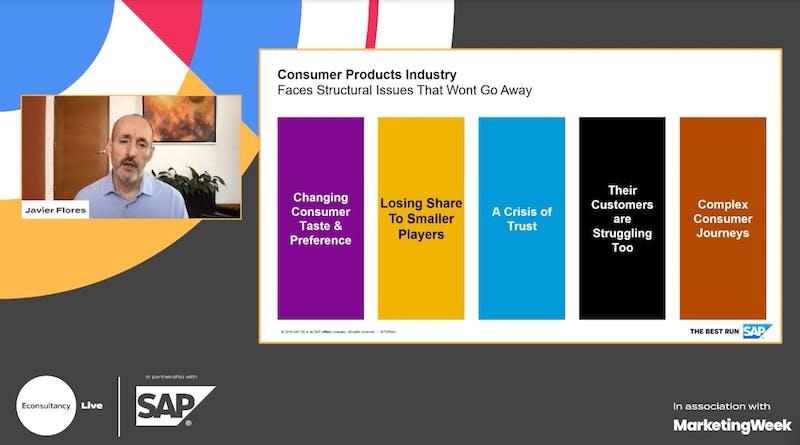 The increase in complexity of sales channels and the rise of consumer expectations represent a challenge for Consumer Products manufacturers to deliver meaningful consumer experiences that drive brand preference and sales. During this watch-on-demand session from the SAP Together Works Summit at Econsultancy Live, Javier Flores, CX Advisor at SAP, discusses the different B2B & […] 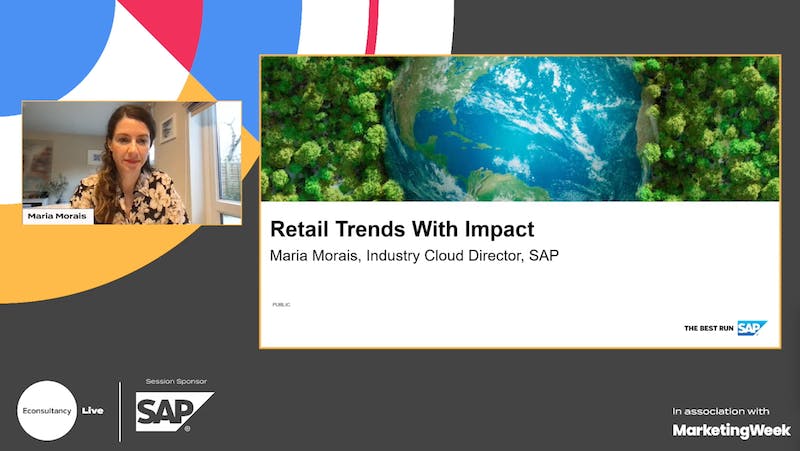 Great technology and a unique selling proposition are not enough reasons for customers to buy more. Retail needs smart data to run their business better and the broken relationship between ecommerce and bricks-and-mortar retail will have to be mended sooner rather than later. In this on-demand talk from the SAP Together Works Summit, part of […] 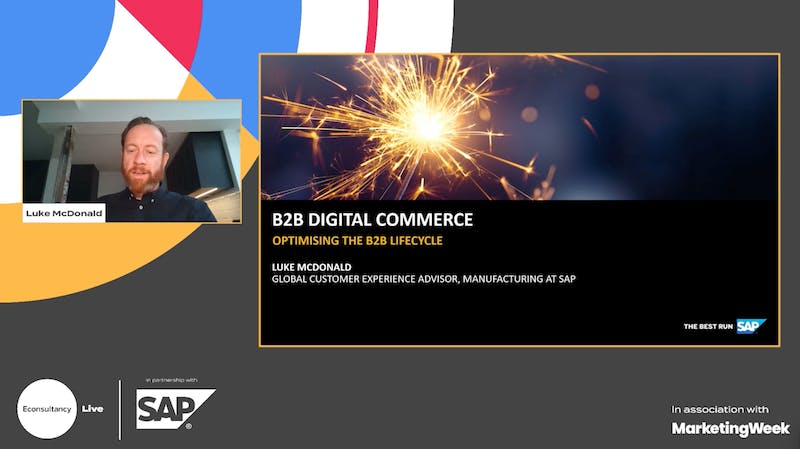 Customer expectations regarding response time, personalisation and purchasing options are rising, as B2C experiences increasingly become the norm in the B2B orbit. Given that bespoke engagement nurtures relationships, boosts loyalty and grows your brand, how do you deliver the digital experiences that your customers really want? To learn more, watch this session from the SAP […]