Spring has arrived, and as lockdown begins to lift, we’ve got another roundup of the best social media stories and campaigns from April 2021.

There’s a wide variety of different campaigns to cover this month, ranging from Cadbury’s virtual Easter egg hunt to Dove weighing in on the topic of self-esteem. We’ve also thrown in a couple of caterpillar cakes for good measure.

Perhaps the most powerful campaign this month is Dove’s viral social content focused on widespread use of digital distortion in online images. The brand, which has a lengthy history of promoting diversity and authenticity in beauty, and combatting harmful modern beauty standards, is now centring its content on the next generation – the first to have grown up surrounded by social media from a very young age.

On 20th April, Dove posted a short video on its Instagram feed depicting the rewound process of a teenage girl taking and uploading a selfie for social media, which included a substantial amount of in-app photo editing. The film, titled ‘Reverse Selfie’, promptly went viral, thanks in part to several high-profile influencers and celebrities sharing it to their own feeds and Stories. At the time of writing, the video has more than 765k views.

Dove calls the new campaign #NoDigitalDistortion and it forms part of its ongoing Self-Esteem Project, which has been in place since 2004. It comes as a US study reveals 80% of girls have distorted the way they look online by the time they reach 13 years-old.

Alongside its compelling visual content, Dove is encouraging social media users to take the #NoDigitalDistortion Pledge, which asks adults to talk openly to young people about the dangers of retouching apps, as well as advocate for a more inclusive definition of beauty on online platforms. Once signed, social users can use a dedicated lens created by the brand to increase awareness of the pledge and the wider campaign.

Parents and teachers can also download special activity packs to help with these discussions.

Another poignant campaign this April came from Operation Black Vote, an organisation that aims to tackle the Black democratic deficit in the UK.

Ahead of the postponed local and London mayoral elections this May, Operation Black Vote, alongside agency Saatchi & Saatchi, produced an influential film about the importance of Black citizens registering to vote. It reflects on the historic events of the last year, including the murder of George Floyd and the rise of the Black Lives Matter movement, complete with striking monotonal imagery and a moving narrative.

The film ends with the message that the progress made via petitions, conversation and protest will be #AllForNothing if Black voters don’t turn up to the ballot box next month.

The campaign gained the support of BT Sport, sharing the film on its own platforms to help raise awareness further before the registration deadline on 19th April.

Thank you @btsport Your leadership along with allyship to empower our citizens to have a democratic voice and confront systemic racism is priceless. @saatchilondon #allfornotjjng https://t.co/o5S9filoPS

Lego has partnered with We Are Social this month to produce a series of films, published on YouTube, which explore how Lego play can unleash creativity in young people and inspire their future journey.

The three ‘episodes’ feature a prominent figure in the art, film and architecture industries – Alexa Meade, Billy Porter and Sir David Adjaye, and each focuses on a specific theme or topic, from inspiration to unique creative perspectives.

In episode two, for example, actor Billy Porter meets two kids, Josey and Clint, at the United Palace Theatre in New York. Over a pile of Lego, together they discuss how creativity and a positive mindset can allow you to express your true self to the world. The final product, an intricate Lego crown (reminiscent of Porter’s own red-carpet creations) is unveiled, featuring the kids’ favourite things, including flowers and rainbow colours.

These films are equal parts heart-warming and thought-provoking, while connecting the Lego brand to the wider, more abstract concepts of creativity, perseverance and expression.

Cadbury teamed up with VCCP to put a twist on the traditional Easter Egg hunt this Easter, promoting its virtual ‘Worldwide Hide’ campaign whilst the UK was still under full lockdown restrictions.

Through its social content and TV ads, Cadbury encouraged its followers to hide a virtual Easter egg at any location in the world via Google Maps Street View and then share a personalised clue with the recipient as to where it might be hidden. The person opting to hide an egg was also given the option to purchase and send an Easter egg through the Cadbury website as a physical token of the hunt and holiday.

The campaign was incredibly successful by the time it ended, seeing more than 700,000 people hide a virtual egg for a loved one.

Tesco – Pop to your local

When outdoor hospitality reopened once again on April 12th, Tesco posted something rather unexpected on its Twitter feed.

Across an image of a perfectly chilled pint read the caption, “As good as our deals are this week, we’d rather you support your local pub… Because right now, every little helps.”

Supermarkets have no doubt benefitted over the past year, with revenue skyrocketing and sales of alcohol for lockdown drinking reaching new highs. The thoughtful sentiment of the ad seemed to hit a note with users on the platform, gaining the brand a largely positive response, with 33.3k likes and over 5k retweets to boot. One user thanked the brand and suggested other supermarkets should follow Tesco’s lead:

Hey Tesco that is about the best and most generous piece of advertising I have seen you do. Supporting the backbone of our hospitality industry is huge and so important and I wish more supermarkets would show the same support even for a day.

While the campaign hasn’t been exclusive to social media – it has also been run as a print ad – it certainly seems to have made an impression on the people of Twitter.

Bath and beauty brand The Body Shop has been exploring how its customer base can actively promote self-love.

Content for the campaign, titled #SelfLoveUprising, includes a series of short clips featuring a diverse group of activists explaining what self-love means to them and how the concept has helped them grow as individuals. The brand has also been engaging with UGC by sharing the ways in which its followers have been brushing up on their own acts of self-love.

A post shared by The Body Shop Official (@thebodyshop)

Perhaps the most standout part of the campaign is The Body Shop’s recent Brand Takeover ads on TikTok, the most popular of which has gained a whopping 18.5 million views to date. Some of the platform’s best loved creators were recruited for the ads, which encourage TikTok users to take up the #BeRightBack challenge by showing the community how they practice self-love (and tagging the hashtag).

Tell the world you’ll be right back and do something for you. #BeRightBackWorld

Swiping through to the brand’s website from social, there is plenty of advice readily available to help its followers and customers to start their self-love journey, and tips for improving it if they’ve already started. Visitors can even upload their own photo and story to add to a gallery alongside other advocates.

April marks Sexual Assault Awareness Month in the US, and as such, TikTok partnered with experts at RAINN to provide TikTokers with advice, guidance and other resources on coping with and spreading awareness of the impact of sexual violence.

This involved creating a dedicated information centre on the app, which was promoted via hero banners on its popular Discover Page. Displayed in the information centre are a select number of TikToks highlighting key discussion points, educational copy and access to the US National Sexual Assault Hotline. The platform also introduced a number of permanent public service announcements attached to hashtags, for example #consentmatters, to direct users to help and resources associated with these important topics.

In a blog post for the platform, Ebony Tucker, Product Policy Manager explained: “It’s a time to recognize the important conversations happening on our platform about sexual violence, recovery, and advocacy. We’ve been working with experts to improve our understanding of sexual assault and trauma and how to foster a safe and supportive space for survivors.” 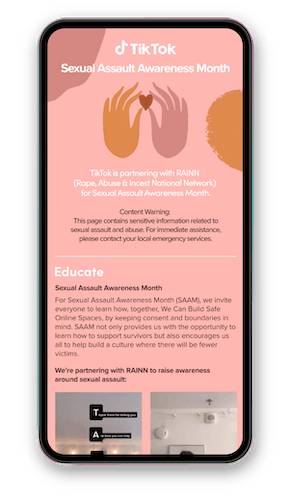 And finally, we all know Twitter would be nothing without the occasional public banter between brands.

After M&S accused discount supermarket Aldi of infringing its Colin the Caterpillar trademark, their social media managers seemed to take the issue into their own hands, in a series of backhanded Tweets which ranged from witty to outright bizarre.

Cuthbert has been found GUILTY…

..of being delicious. #FreeCuthbert

Live from inside the courtroom. #FreeCuthbert pic.twitter.com/3gCk7Ex553

Our social team over the weekend: pic.twitter.com/G2DEM5D6iu