It’s time for another round up of the best social campaigns from the month gone. July brought us the return of Back to School season, and the much-anticipated delayed Tokyo Olympics, the latter dominating this month’s most engaging activations. In particular, TikTok has made every effort to raise enthusiasm for the great sporting event among its users, with interactive campaigns in association with Team USA and Team GB, among others.

TikTok is asking its creators to recreate iconic ads of old in its most recent of many campaigns – Re:Make. The platform hopes that by reimagining these classic shorts as TikToks, brands will take note of the influence TikTok now has within the advertising space and consider investing even further in marketing on the app.

In a press release, TikTok explained, “Re:Make is a celebration of the iconic advertising campaigns that have shaped the industry and influenced culture — while showcasing how TikTok has provided an entirely new way to captivate and persuade audiences.”

So far, brands like Snickers, Skittles and Old Spice have partnered with well-known TikTok creators to produce humourous spoofs of their most famed activations from years gone by. My favourite is this recreation of the Snickers’ ad ‘You’re Not You When You’re Hungry’ which first graced our TV screens during 2010’s Super Bowl. Here, popular duo @rosssmith and his gran take on the original with hilarious results.

In Q2 2021, Snapchat posted record quarterly ad revenue, rising 116% year-on-year to $982m. Daily active users during this period were also the highest the platform had seen in four years, demonstrating the huge impact the pandemic has had on accelerating the social app’s performance.

In response to this, Snap has introduced a brand new ad to celebrate the latest trending lenses across its ever-evolving app, and encourage even more consumers to start using it. The creative, upbeat 30-second spot features a myriad of user generated content showcasing Snapchat’s most popular AR filters.

The campaign is currently running in three of its largest markets – the US, UK and Mexico – before being rolled out to India, a key additional target for the app.

This follows the brand’s recent announcement in which it revealed plans to launch new Snap branded AR glasses. It is therefore clear why the social platform is focusing on the promotion of its viral in-app lenses (that made the app so popular in the first place) rather than, for example, its increasingly successful Spotlight feature.

Comcast-owned US wireless services provider Xfinity has teamed up with Team USA. It asks TikTokers in the region to add their own modern spin to the famous Olympic Anthem ‘Bugler’s Dream’, whether by singing along, playing an instrument, or something even more creative, under the hashtag #XfinityFanthem.

To kick off the campaign, Xfinity debuted a new TV spot ahead of the Tokyo 2020 Olympics opening ceremony on 23rd July. This was launched alongside a series of digital content featuring collaborations with faces from the world of sport, such as Brianna Decker and Kevin Harvick, as well as well-known TikTok stars Cale Brown and Luna the Pittie.

The #XfinityFanthem hashtag challenge has been viewed a total 5.4 billion times on TikTok thus far, with makeup artists, beatboxers and even pet toads getting in on the action as they support their national team.

#ad Luna’s warming up to support #TeamUSA !! This is her Fanthem, join in with @xfinity to cheer on ???????? in the #OlympicGames #XfinityFanthem

AdAge reports that the best entries will be added to a compilation commercial which will be aired during the ad break(s) of the closing ceremony on 8th August.

As Team GB continues to rake in the medals, TikTok has introduced the official hashtag #AskTeamGB to allow users to connect on a more personal level with their favourite British athletes as they watch along at home.

Over the course of the summer, TikTokers are encouraged to reply to a pinned video, featuring Tom Daley, that appears at the very top of the #AskTeamGB discover page. Users will then be in with the chance of having their most burning questions answered by one of the 376 British competitors currently participating in Tokyo 2020.

Responses have so far been posted by golfer Tommy Fleetwood, canoeist Kimberley Woods and gymnastics gold medallist Max Whitlock, while posts under the hashtag have been played over 60 million times to date. This will undoubtedly rise further as the games continue into August.

To celebrate and promote the launch of the new McSpicy burger, McDonalds has created a new social-led campaign asking the question: how hot is it really?

During the promotion, social media users across all platforms are persuaded to join what it calls the #McSpicyDebate and share their opinion on the level of spice the brand’s latest invention brings to the table. McDonald’s customers are asked to rate which of four categories they would place the McSpicy burger in: ‘a lil’ kick’, ‘pretty spicy actually’, ‘hot hot hot’ or ‘my mouth is on fire!’ – categories which are also illustrated on the burger’s wrappings as a prompt.

Core content for this activation includes a lighthearted 1-minute ad which has been shared on all of McDonald’s official UK social accounts and features influencers Bash The Entertainer, Nella Rose, Adeola Patronne and Ehiz Ufuah.

The campaign is a fun and engaging way of allowing the brand’s most active customers to have their say on this latest recipe, serving as a useful social listening tool to make improvements and even new products based on any feedback.

Following the fashion brand’s successful partnership with Snapchat in the 2020 holiday season, American Eagle has launched its back to school campaign with the app, titled ‘Future Together, Jeans are Forever’.

In the lead up to Christmas 2020, American Eagle first teamed up with Snapchat to create an AR pop-up shop experience before introducing a 3D jeans catalogue in Spring 2021.

Yahoo Finance reports that shoppers will be able to browse the full American Eagle collection by way of a try-on AR experience, expanding on the shoppable features mentioned above. Snapchatters can share their favourite looks with their friends while inside the try-on simulator, and instantly shop for apparel without leaving the platform. This most recent collaboration marks a step further into virtual try-on technology, which has seen much greater demand from consumers since the pandemic first hit. 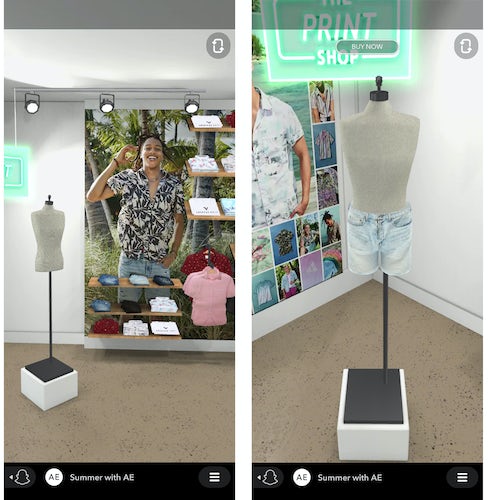 This wouldn’t be a social stories roundup without adding a dash of humour to finish things off.

Adam Driver, like many celebrities, has been the subject of many a meme since he first rose to fame, and his latest partnership with Burberry has once again sent Twitter users into a frenzy.

The Bizarre ad, which went viral on 28th July, pushes the luxury brand’s new summer fragrance Burberry Hero and sees the actor transform into a mythical centaur after he runs into the ocean alongside a horse.

While this was a clever and creative way of reflecting Burberry’s iconic logo, the ad received a mixed reaction from Burberry and Driver fans alike and prompted several more Tweets mocking the concept, like the one below.

So in the new Burberry ad campaign it's revealed that Adam Driver is a centaur, which looking back, I can't believe I didn't notice before pic.twitter.com/H9NKSBwY46